Under normal circumstances I cannot stand claims that New Zealand is ‘a world leader’ at something. I know it’s risky – particularly now – to admit to this unpopular sentiment but desperate jingoism sets my teeth on edge. Why are we so desperate for the world to like us? Can’t we be content to be good at something and let that prowess fly under the radar? New Zealand is an actual champion at something barely ever talked about. Bizarre. It’s got nothing to do with the usual things we trumpet – it’s not a product we invented and the major ingredients aren’t even grown here. Yet, my late-blooming patriotism bursts into life every morning when I open the pantry and reach for a jar of nut butter.

Most of the time it’s Pic’s Crunchy Peanut, but on high days and holidays it could be Fix & Fogg Chocolate Hazelnut (extremely posh Nutella) or Forty Thieves’ Superfood (a nutty, seedy, herbaceous party in your mouth). Hand on heart, no one makes better nutty butters than we do. No one. I’ve scoured Australia, the UK, the US and Europe, but none of them come close. I’m not the only one to think so – Fix & Fogg are selling theirs in the US, where peanut butter as we know it first became seriously popular in the 1920s.

Chocolate avocado butter. Like a kind of woke Nutella (if you are using in season, local avocados, of course). You know you want some. Recipe – if you can call it that – on www.thekitchenmaid.com (link in profile). . . . . #linkinbio #chocolate #avocado #avocadotoast #chocolateforbreakfast #nutella #breakfast #homemade #scrumptioustribe #thekitchenmaidathome

Peanut butter is probably the one local foodstuff I missed while living in France last year. The French don’t do nut butter, unless you count Nutella, which is considered a vital foodstuff. When workers at the world’s biggest Nutella factory went on strike last year there was widespread panic at the prospect of a shortage.

We scoffed at the time, but I have to admit I’d feel the same if production hassles hit any of our local makers. That’s why I’ve recently turned to experimenting with making my own. You never know when you’re going to need a vital culinary life skill, as anyone who turned to baking their own bread in lockdown will tell you.

Arrogantly, I thought mastering DIY nut butter would be easy. All you need is good nuts and a food processor, right? Well, yes and no. If you’re big on texture (which is integral to the success or failure of any spreadable condiment), then you’ll probably struggle to create a nut butter with the same silky smoothness and the right amount of crunch. That kind of holy grail is obtainable only with machinery you’d need to remortgage the house to afford – and not even I am going to be that silly.

However, going down the DIY route does have its benefits. One, you can easily customise the flavours in your creations. Two, never again will you have to face a morning without PB because someone ate the last spoonful from the jar and forgot to put it on the shopping list. And three, you’ll feel in control of a vital source of protein, fat and joy for your household. What’s not to love?

The following cashew butters are probably not a great threat to the Pic’s, Forty Thieves or Fix & Fogg’s of this world, but they’re not bad. Spread one of these on your toast tomorrow and you’ll feel like a world beater. Put 200g roasted, salted cashews and 100g (about 10) dried (stones removed) dates in a food processor. Whiz for five minutes – the noise will be horrendous for the first two minutes but it will settle down – then stop the machine.

Add 1 ½ teaspoons ground cinnamon, ½ teaspoon ground ginger and 1 tablespoon peanut oil and whiz again until smooth-ish. This will take another 5-10 minutes, depending on the fortitude of your processor. Stop the machine occasionally and scrape down the sides.

When the consistency seems about right, taste and add a pinch of salt if necessary. Scrape into a sterilised jar with a lid. Resist the urge to eat with a spoon! 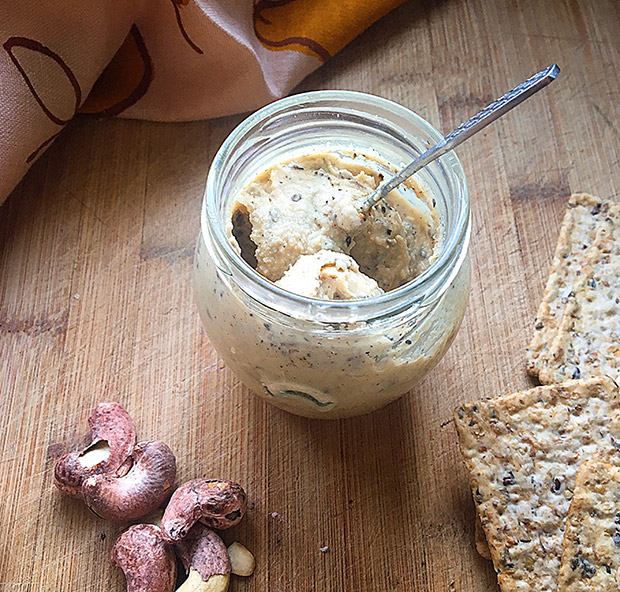 This one’s same-same-but-different – a more savoury option that’s killer with celery sticks and crackers. Put 1 ¼ teaspoons cumin seeds, ¾ teaspoon ground coriander and a generous pinch of dried chilli flakes in a small pan set over medium heat. Toast until fragrant (don’t let them burn!) then remove from the heat.

Put 200g roasted, salted cashews in a food processor. Whiz for five minutes, then add the toasted spices and 1 tablespoon peanut oil. Whiz again until smooth-ish. When it’s reached a pleasing consistency, season to taste with salt and freshly ground black pepper. Store in a sterilised jar with a lid.