There are two types of silence that are awful to observe in children. Three-year-old Zendo demonstrated one when he quietly disappeared the other Monday.

It was delicious at first – the lack of noise from a rambunctious child who questions life with a machine-gun volley of ‘whys’. Suspicion followed.  Sure enough, his hush was that of a boy wishing to remain undiscovered as he sat outdoors in a puddle, wallowing happily in the mud.

“We’ll have to go back to the hospital,” I admonished. The plaster cast on Zen’s leg had softened to mush.

The other, more ghastly silence had occurred at the time of the injury. It was that terrible eternity after an accident as a child fills its lungs to scream.

Zendo had reached for a knife; not his little red-handled fruit knife but the big, sharp chopping one he isn’t allowed. Sometimes, it seems, a boy needs to find out for himself what exactly is meant in a warning. He accidentally knocked it to the floor where it landed tip first like a dagger, stabbing near his big toe and severing two tendons as if they were mere cotton threads.

His howl, when it came, was the hot-throated screech of train wheels braking; running on and on as we both stared in horror at the gaping hole in his foot.

The blood took a long time to come. It could’ve been a home-schooling opportunity.

“Look children, here’s what’s beneath your skin. See those white lines? What do you think they are?”

Instead, we played doctors and nurses. Six-year-old Vita applied sopping flannels to her brother’s head while I faked calmness and dealt with the sudden fountain of blood. It was James, arriving home to a war scene, who pointed out the alarming droop in Zendo’s big toe. 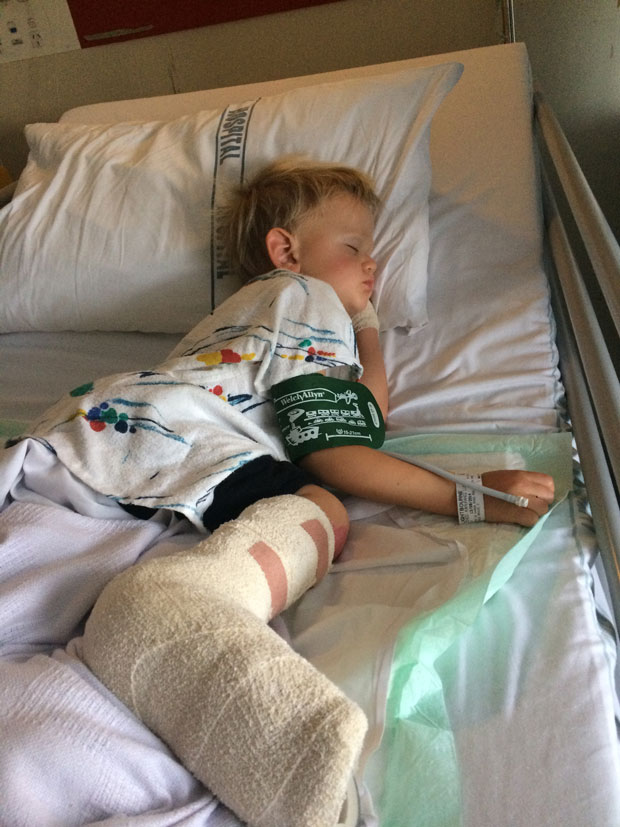 A remote location is a double-edged sword. It was a long drive to Kaitaia Hospital and an even longer evening of poking, prodding, and shrieks as the emergency department tried to ascertain the damage.

“Come back about 11am tomorrow,” they eventually said, recommending nil-by-mouth in case of surgery.

We stopped en route at the Kaitaia morning market for avocados. Embarrassment is a hungry three-year-old tearfully pleading for food as passers-by shake their reproachful heads at his unbending parents.

From Kaitaia Hospital, we were eventually sent to Whangarei where an orthopaedic surgeon was waiting to operate.

“Keep your son on the couch for the next two weeks,” she instructed after surgery. James and I exchanged doubtful glances. In the background, Zen had tired of putting his remote-controlled bed through its paces and was attempting to clamber over its side.

The staff at Kaitaia Hospital were sympathetic to a boy’s need for mud as they peeled back Zendo’s ruined cast nine days later. But their faces sobered as we surveyed his big toe drooping as limply as ever. The tendon graft had failed. We would have to return to Whangarei immediately for more surgery.

Emergency departments are places of suffering and fear. People in pyjamas clutched at their innards with anguished expressions. Kids in sports gear inspected various swellings with ghoulish interest. Elderly ladies, half-swallowed by their plastic bucket chairs, looked small and alone, closing their eyes as noisy families with wet-nosed, raspy children settled into the queue.

There was more waiting backstage, in thinly-curtained cubicles where ailing bodies were hooked to beeping machines.

Day turned to night. Across from us, a weeping woman kept loudly wishing to end her life while Zendo, hungry Zendo, was kept distracted by my phone running Donald Duck cartoons that had him laughing uproariously in that miserable place.

Ward Two belongs to the children and gentle nurses born with the caring gene. Even though my furious son had shrieked childish insults at them during our last stay, they welcomed us back like old friends; settling Zen into his bed and ushering me into the sort of fold-out armchair that shuts slowly in the night, clam-shelling its victims into unconscious contortions before they stir to a dozen new kinks and cricks.

Time is suspended along that bunting-strung corridor with its murals and cartoon depictions of germs. In quiet anxiety, parents sit waiting for doctors and nurses, for test results, for the summons to theatre and for an anaesthetized child to wake. How many weary mothers and fathers have sat by those bedsides, offering supplications into the night as they follow a child’s fluttering breath?

There’s the wait for midnight arrivals to settle; for sickly, bleating babies to quieten and corridor lights to dim. After the whispering nurse on his or her 4am rounds, there’s the dozed pause for dawn, and the joyless anticipation of the clattering meal trolley delivering its beige, boiled food. And always, the hopeful wait for a doctor’s discharge so normal life can resume.

This time Zendo has come home in a wheelchair and a glitter-coated fibreglass cast. There are wires beneath his skin and a metal bar encasing his toe. There’s a recovery period of at least eight weeks before he gets back on his feet. That’s like forever to a boy who yearns to run free; perpetuity to his parents who watch in despair as he whizzes past backwards and gleefully ricochets his wheelchair off the dining table.

I know we’re lucky. Back in Ward Two there are families measuring their hospital stays in weeks and months; while eternity for some is the wait for a child who won’t ever be coming home.