On moonless winter nights in our valley, darkness pours in like an underground river, saturating the place in a blackness both profound and all-encompassing. Standing on the edge of the forest, it feels as if there’s no distance at all between us and deep space. We are indeed immersed in the cosmos.
Indoors; candles, lanterns and headlamps cast small islands of light against shadows, but once the children are sleeping, James and I often turn everything off, preferring just the dancing orange glow of the fire. 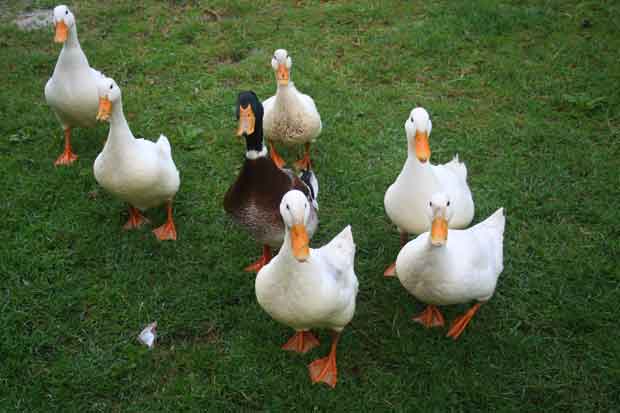 Breaking the serenity, however, James sporadically switches his headlamp onto high-beam; sweeping it across the glass front of our room like a security guard on patrol.
‘Ducks,’ he offers by way of an explanation.
If an unfortunate creature ambles up to the bi-fold doors or is sighted near the veggie beds, he leaps to his feet; all wind-milling arms and sudden loud noise as he chases it off across the lawn.
Slowly, our Pekin flock is learning to keep away from the house. Duck-poo on the doorsteps and garden-plundering has reduced significantly thanks to his efforts.
But who knew ducks were so nocturnal?
Ours seem to spend their nights roaming, presumably driven by an endless quest for bugs. I hear them on the back bank after midnight, rhythmically clacking their beaks as they hoover through the plants. By 3am they usually arrive below the bedroom window for a conference of some kind, honking and quacking with considerable feeling.
‘I. Hate. The. Ducks,’ James has hissed more than once from beneath his pillow.
We have no flowers left in pots. The cabbages have been eaten. Two crops of rocket and miner’s lettuce have been razed to the ground. Every raised bed is draped in unsightly netting. I too, hate the ducks.
They routinely break into the chicken run and help themselves at the chookateria. If they’re laying, we never see their eggs, and the drakes have introduced the kids to a brutal sex education with their aggressive group matings.
Yet ours is a love/hate relationship. The vegetable beds have never been so free of slugs and snails. The grass is kept short by their nibblings; all sorts of new and interesting trails have been opened up in the bush by their wanderings, and so long as they’re at a distance, the white ducks are aesthetically very pleasing.
‘They taste good too,’ James volunteers.
So far, only Patu, a drake, has fallen victim to the pressure cooker but James found him so delicious, it’s only a matter of time before duck again features on the menu. This week, however, the flock is safe as James and I have been fasting.
A friend provided our motivation. Walking into a room last month, Simon looked so clear-faced and vibrant; it was as if he’d been washed from within. In a way, he had.
‘I’m on a water-fast,’ he told us. ‘This is day five.’
James and I decided then and there to do a water-fast too.
Last year we did a seven-day green juice fast, followed by three weeks of soups in an effort to heal James’s mysterious stomach pains. It was a mournful month, but the results left us feeling so turbo-charged, we resolved to make it an annual affair.
Inspired by Simon, we began our water-fast last week.
Depriving one’s body of food over a sustained period is a curious procedure. According to Google, the process sees blood sugar drop dramatically on the first day. To restore the level, liver glycogen is converted to glucose and released into the blood. Once that supply is exhausted, glycogen is pulled from the muscles. From there, the body starts to break down its fat supply, simultaneously releasing any stored toxins. Headaches, dizziness and nausea can result.
With the digestive system at rest, the body uses energy to cleanse organs instead. Enhanced vitality and clear-mindedness follows, various websites promised.
True to form, I spent a couple of days feeling thoroughly wretched, but on the afternoon of day three, something amazing happened. Like a ship sailing out from the harbour, I left my hunger behind. For a while, it sat on the horizon, but continually receding – growing distant and hazy, until it just wasn’t there. The air felt crystalline, and I became very, very present; my mind ringing like a tapped crystal glass.
‘I have transcended my body,’ I announced rather grandly.
In fact, what are our bodies, James counter-queried? He’d just heard on the radio that microbes in our bodies make up around 100-trillion cells (ten-fold the number of human cells) and our stomachs contain around 10 million genes within their micro-biome. Meanwhile, we consist of around 20,000 genes in the human genome.
We are, literally, universes in which countless populations of life exist.
As the fast continued, I started thinking about those other life-forms. Everyone knows we need diversity. Were my internal populations in balance? What was happening as I denied them energy? Would the good gut-inhabitants survive once the sugar-addicted residents died off?
Taking the maxim, as above, so below; was the body of Earth out of balance with its heaving population of energy-hungry humans? What would an Earth cleanse look like?
I came off the water fast and onto juices and salads after four and a half days because I began to feel awful again. Was this more detoxing, or was I actually starving? I don’t know, but I was finding it difficult to function.
James stretched his fast out to eight days and looked 10 years younger in the process.
Websites urged that the best results of a water-fast appear after at least 15 days of not eating.
Surely those people aren’t working or caring for young children, we agreed.
Since the fast, we’ve been slowly reintroducing probiotics and lots of raw foods – carefully and consciously rebuilding our internal worlds.
Suitably inspired and curious, we’ve already agreed fasting will be back on next year’s calendar.

Polly’s blog: nasty lumps and things that go bump in the night