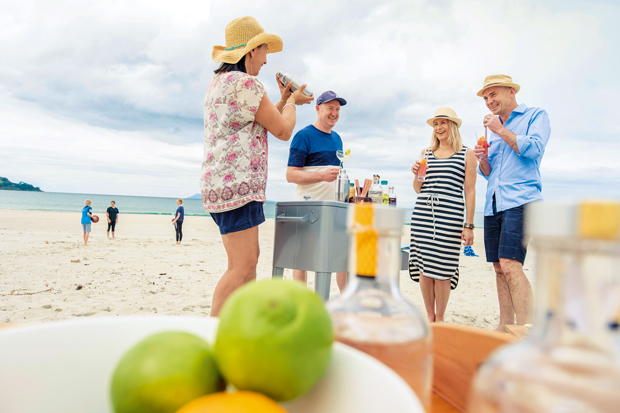 Cocktail hour is getting easier – and more fun – thanks to four friends and their collective love of cocktails: Scroll to the end for espresso martini and beachcomber recipes.

Few great ideas are born the day after New Year’s Eve – even fewer are nursed to fruition. On 1 January 2016, four long-time friends sat around an Omaha kitchen table reflecting on activities from the night before. “It had been our annual progressive New Year’s Eve party around the neighbourhood that always ended at the Bosleys for dancing,” says Nazla Carmine.

“It was a grey day so we couldn’t go to the beach. We were doing jigsaws and talking about who did what, and what we ate and drank. Then someone said: ‘The only thing that would have made it better would have been cocktails.’ But cocktails are hard. You have to go to the bottle store and supermarket for all the bits, and you need to buy big bottles of spirits and liqueurs that just take up space in the back of the cupboard.”

Says Sally Bosley: “And then you need to find the right recipe, and the choice is overwhelming.” So the group started thinking – wouldn’t it be nice if someone could deliver everything needed to make perfectly proportioned cocktails?

“I started Googling and found that no one seemed to be doing it aside from an outfit in the United States,” says Simon Bosley, Sally’s husband. The timing was perfect. Professionals with skills spanning accountancy and finance, project management and operations, all four were ready for the leap into entrepreneurship. Also, advances in technology were making it easier and easier to offer online ordering.

“Our research showed interest in craft spirits was on the rise, as were home food deliveries,” says Nick Halpin, Nazla’s husband. “We liked to entertain and so did our friends, so we backed our idea to launch a cocktail delivery service. We were excited about building something that didn’t exist, something tangible.”
After a few months creating the concept, and quite a bit of – ahem – market research, Nazla gave up her project management job at Auckland Council to work full time on their nascent venture, Cocktail Collective.

While the quartet loved cocktails, they quickly realized they needed some know-how on board. They brought in mixologist Grant Pickup and used his more than 20 years in hospitality to develop the kind of cocktails they aimed to offer.

“We wanted Grant to develop the very best version of the classic cocktails people know and love,” says Nazla. “We wanted people to be able to go to our website and understand exactly how the cocktails would taste. We would then deliver what they needed to make the drinks, wherever they might be.”

Nazla spent most of the year before launch scouring the country for the best growers and craft producers. Then she’d cold call. “I’d say, ‘Hi, you don’t know me and we haven’t got a business yet, but we love your product and we’d like to include it in our cocktails.’” That’s a short version of how she got East Imperial’s tonic and ginger beer included for the tom collins and moscow mule respectively (the company’s Tony Burt has become a mentor); coffee roasters Altezano Brothers created a cold brew especially for the Collective’s espresso martini; and pure lemon and lime juice from St Andrew’s Limes in Hawke’s Bay is the star of the fruit cocktails, just to mention a few. “We include our suppliers in our name,” says Nick.

“Cocktail Collective extends to them. We want to showcase their products in our cocktails.” Even the spirits – aside from the tequila, which by definition must come from Mexico – are bespoke distilled or blended under licence on Auckland’s North Shore to suit the recipe.

“Grant would talk to our distillers about the flavour profile needed for the cocktails we wanted. Like a gin in true dry London style, a clean, crisp vodka, or the base rum spirit blended to be just right for our beachcomber, all crafted locally in small batches,” says Nazla.

More stories you might like:
Why you should add cavolo nero to your garden (PLUS a one-pot ribollita soup)

When the company launched in May 2017, there were five cocktails on offer: a tom collins, southside royale, moscow mule, margarita and a beachcomber. An espresso martini followed in July, then a limited-release bourbon old-fashioned, and now a mojito for summer. “We include something special and different in each of our cocktail boxes. For example, the margarita has a citrus chilli salt by Tio Pablo, the espresso martini has a vanilla liqueur made especially for us and chocolate-covered coffee beans. And there are striped, environmentally friendly straws for the beachcomber.”

Just enough of everything for 10 or 15 cocktails – including a spirit measure and fresh garnishes – goes into Cocktail Collective-branded bottles and packets, and is packed by Sally in the group’s Birkenhead office.

The cube-like cocktail box is a bespoke, two-tiered cardboard engineering marvel, created by a cardboard engineer (who knew?) at Think Packaging. It merely folds together, nothing is stapled or sealed and it is designed to reveal its contents piece by piece. “Opening the box and unpacking it is all part of the experience. People seem to be just as excited about discovering all the bits and pieces as the spirits,” says Nazla.

It’s also designed to withstand the rigours of delivery. “So far we’ve had no breakages, and that includes going as checked luggage on international flights,” says Sally. “CourierPost is pointing to our boxes as the standard.” And with that, the Shopify app on everyone’s phone pings, signaling their next online sale, and another cocktail box to pack. For more details visit Cocktail Collective. The beachcomber is a beautiful cherry-red cocktail that’s perfect for summer – at the beach, on the boat or by the pool. It was one of the original “tiki-styled” cocktails to emerge after the austerity of the Prohibition era, and while a vast variety of beachcomber recipes exist today, many have lost sight of the original intent, which was to create a tall, tropical-inspired drink that speaks of sun, surf and sand.
Needed: Tall highball glasses, a cocktail shaker, a strainer, a knife and chopping board, plenty of ice, a spirit measure
Makes: 2 serves
Chill: Chill the glasses by popping them into the freezer for a minute, or fill each with ice (discard before pouring).
Quantities: 1 part equals small cup on
measure, 2 parts equals large cup.

Combine: In the shaker, mix together:
ice – ¾ full
6 parts white rum
4 parts lime juice
2 parts triple sec
2 parts cherry liqueur
2 parts gomme syrup (a sugar syrup with an emulsifier such as gum arabic* added)
Shake: Fit the lid securely and shake for 10–20 seconds.
Pour: Fill the glasses with fresh ice, and using a strainer pour evenly into the 2 chilled glasses.
Garnish: Add a thin slice of orange peel or a wedge into each cocktail, and add an (ideally paper) straw. 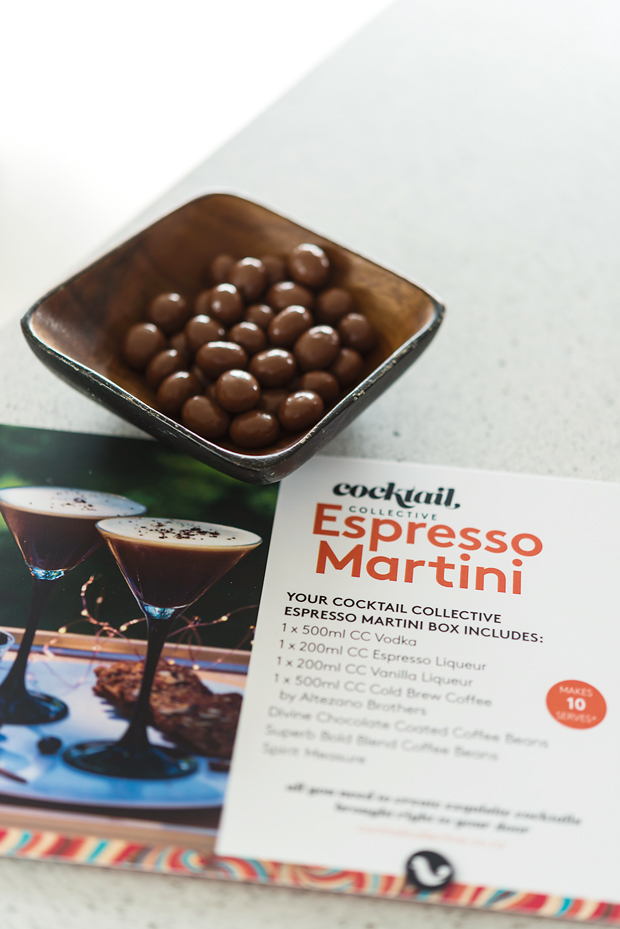 A stimulating combination of vodka and coffee, the espresso martini was created by British bar-tending guru Dick Bradsell in London in 1983.
It came about, so the story goes, when a well-known (but never named) model glided up to the bar and asked for something that would wake her up. Bradsell’s solution – the perfect blend of vodka and coffee shaken into a bittersweet mix.
Needed: Martini glasses, a cocktail shaker, a strainer, plenty of ice, spirit measure
Makes: 2 serves
Chill: Pop glasses in the freezer for a minute or fill each with ice (discard before pouring).
Quantities: 1 part equals small cup on
measure, 2 parts equals large cup.