Peter Wells works on a Chatham Island petrel under the watchful gaze of two kakapo.

The art of the taxidermist lies in the delicate processes of preservation and presentation of creatures great and small.

“The eyes are critical,” says Peter Wells as he rummages through a wooden box, searching for the right colour and size to suit the lifeless bird laid out on his workbench. He settles on a pair then he measures the distance from beak to eyelid and pushes each little glass bead into the clay-filled sockets of the detatched skull.

“If the eyes aren’t looking at you, it’s never going to work,” he says as he stretches the feathered scalp back over the skull and checks that each eye is correctly positioned between open lids. Perfect.

He turns the tiny head and as its beady eye catches the light it’s as if the dead bird has blinked and come back to life. Such is the art of the taxidermist. 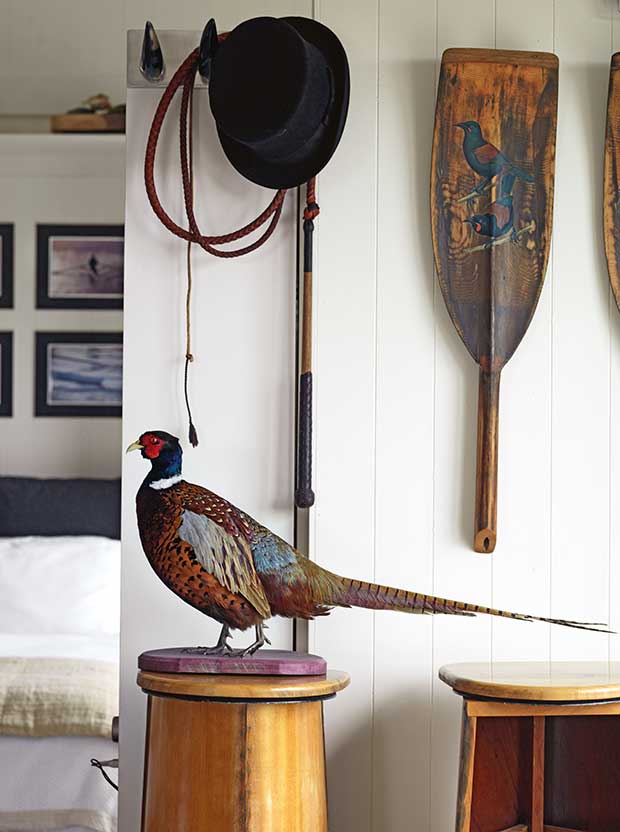 The ring-necked pheasant, one of many released on the Wells’ property, is displayed on one of three bar stools made by Peter from the bow and stern sections of a rowing eight. The oar painting of a saddleback is by local artist Caroline Anderson.

The bird is a Chatham Island petrel, or taiko, one of fewer than 150 left in the world. The taiko is so close to extinction that mounted specimens are the closest future generations may ever get to seeing a real one.

It has to be perfect, which is why the Department of Conservation (DOC) has sent it to Peter. He is an expert in the field of scientific taxidermy, specializing in mounts for conservation purposes and museum collections.

His Marlborough studio receives dozens of native birds, bats and sea mammals from DOC and museum curators as well as the more conventional game-birds, fish, stag and boar heads from his private clients.

He has mounted (excuse the innuendo but there’s no getting past the verb in this story) sea lions, squirrels, snapper and stoats, but a glance around his workshop makes it clear he’s a bird man at heart. 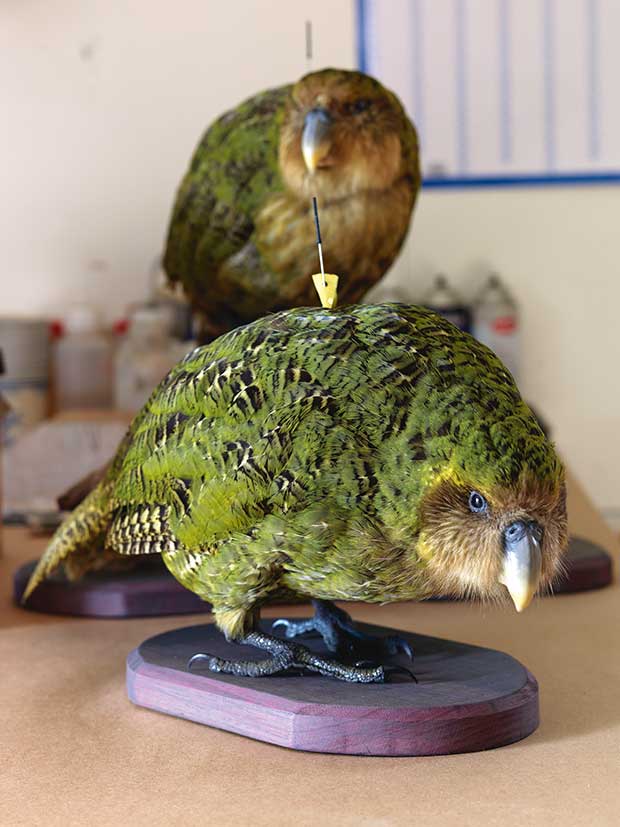 There are birds perched on every available surface. Some are finished and awaiting collection; others still have pins sticking out of their feathers.

“I’ve always had a fascination with birds,” explains Peter. “For a taxidermist they are probably the most challenging thing to do – when you get a bird wrong it looks terrible.”

The skill comes from knowing how birds are put together and the best way to learn is by taking them apart. The truth is, Peter learned about birds by shooting them.

He grew up on a Rotorua farm in a family whose business interests included Kilwell Sports, suppliers of fishing rods and hunting equipment.

Guns went with the territory and Peter learned how to shoot at a very young age. Peter and Michal with Ruger, their bullmastiff.

His primary targets were rabbits but he vividly remembers his very first bird. “It was a thrush. There was a patch of native bush near the house. I sat on a log and I must have waited hours for a bird to land in the tree above me. I had an air rifle and I shot this bird. I wanted to have it in my hands, to see the feathers and its wings and feet and beak. I remember carrying it home on a stick. It’s terrible, but that’s what six-year-olds do.”

As Peter’s interest grew so did his collection of nests, eggs, feathers and bones. He even had birds’ feet lined up in a row, from sparrow to swan.

Later he collected books and videos on taxidermy but it would be years before it became his main focus. On leaving school he combined work in the family businesses with a semi-professional career in rowing. 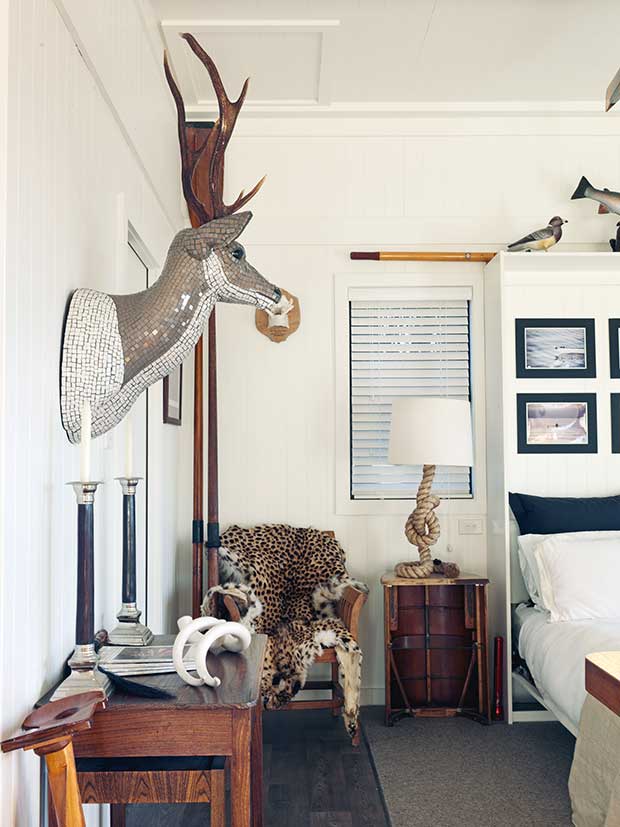 One of Michal’s mosaic deer heads is displayed in The Oar House alongside a collection of taxidermy and animal skins. The coffee table, corner shelves and bedside tables are made from wooden rowing boats.

In 1992, aged 22, he won the New Zealand Senior Single Sculls title but, despite his success, he gave up the sport and in 2000 took up the position of gamekeeper on his parents’ newly established pheasant preserve.

It was the seasonal nature of this job that gave him the opportunity to train as a taxidermist.

He signed up for a course in Michigan – “the States is where it all happens” – and from the day he walked into the school he knew he’d found his vocation.

“It was a huge buzz. Walking into the massive showroom and seeing all those mounts, my mind just went into overdrive. It felt like I was pursuing a life-long dream and then, once we got into it, I was unstoppable.” 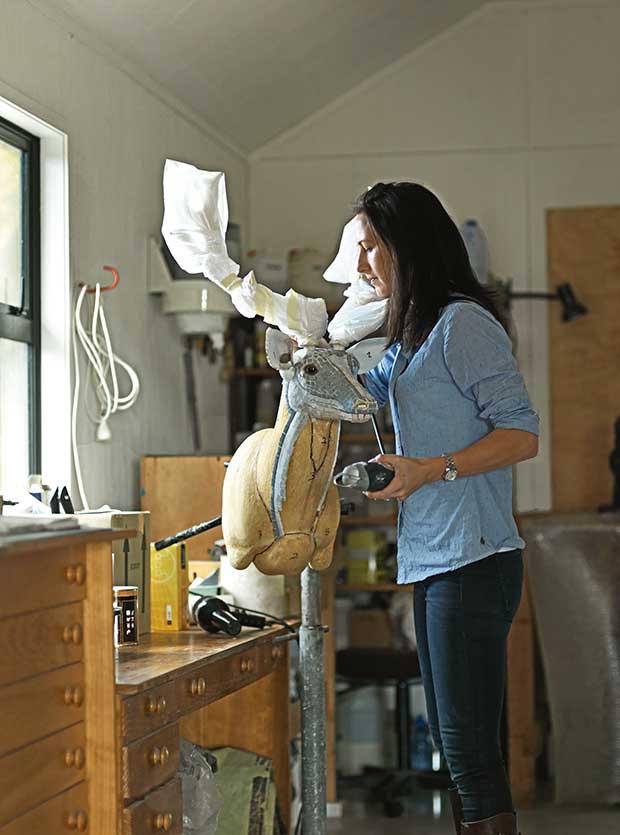 Michal hand-cuts and positions each mosaic tile on forms used in conventional taxidermy to create her trophy mounts. She sells her deer, antelope and trout at Two Rivers Gallery in Cheviot.

Back in Rotorua he set up shop and started working mainly on game trophies – deer, boar and dozens of the pheasants he’d raised to be shot on the family farm.

It was about this time that he met his wife-to-be, Michal.

They were introduced through mutual friends and Michal laughs when she recalls her low expectations of a date with a man described as “a balding taxidermist from Rotorua”. She was pleasantly surprised at the outcome and ultimately intrigued by his vocation.

“I was actually expecting him to be more of a macabre butcher but when I saw him at work I realized it’s not like that at all. It’s far more artistic than that. I was fascinated.” 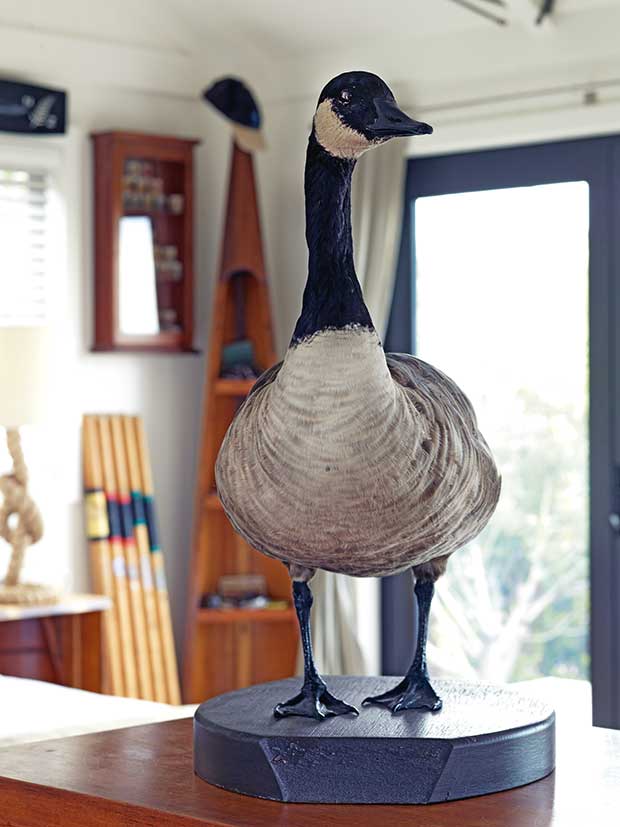 They were married in Marlborough on the coastal property where they now live with their two young children: Wilfie, four, and Frankie, two.

Their home was designed and previously occupied by Michal’s late father, Jimma Dillon. A forward-thinking designer who believed houses should be organic and unobtrusive, he built his own abode, quite literally, into the landscape (see our story The house that isn’t there, Issue 26).

Michal and Peter have continued to develop the property in the same spirit, hiding Peter’s new workshop, barn, clay-shooting range and guest studio amongst plantings of coastal trees and tussock.

Both say they feel extremely privileged to live on such a special piece of land. The shingle beach, creeks and grass-covered dunes offer adventures aplenty for a young family. And while some may find it isolated, Michal says appearances are deceptive.

She grew up in the region and she’s seen how the wine industry has brought young people back to rural Marlborough and made it a good place in which to live. Peter has reconstructed a pair of huia (extinct since 1907) using hand-crafted parts and feathers from common bird species; a boar tusk makes a handy hook for a bottle opener.

The studio is only a short distance from the house so it’s convenient for Michal who shares it for her own artistic endeavours.

She works with ceramic tiles, creating original artworks inspired by the trophy mounts collected by hunters.

She developed the idea in response to the women who told her they wouldn’t have their husbands’ trophy heads hanging in the house.

They could appreciate the beauty of the animal but they didn’t like the fact it was dead. Michal’s work avoids the inconvenient truth by combining the idea of taxidermy with the art of mosaic in a way that celebrates the form of the animal without reference to its death.

Peter is also exploring the art world, despite some early misgivings. “I was very much a purist of correct anatomy and not taking the animal out of its natural environment or its natural look, but now I think there is scope for it.” 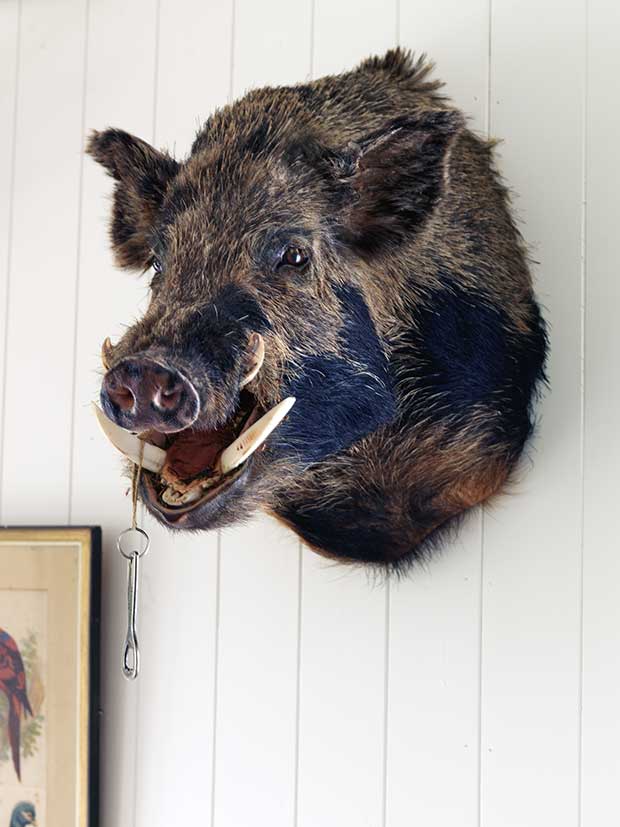 A boar tusk makes a handy hook for a bottle opener.

He draws the line at “hanging jewellery on deer heads” but he’s taken commissions for a restaurant interior and mounted two rabbits for conceptual works by artist Michael Parekowhai.

He’s open as to where his artistic interests may lead but right now it’s museums, not art galleries, that command his attention.

The Otago Museum has sent him a Fiordland crested penguin, a family of weka and a fur seal (all for the opening exhibition at the new Shanghai Natural History Museum) and DOC is waiting on a saddleback, a wren and two kakapo in addition to the Chatham Island petrel-in-progress.

I’ve watched as the bird has been taken apart with scalpel and tweezers then carefully reconstructed around a form sculpted to the shape of its body. The remaining bones have been connected with wires, the skin has been stitched back together and now Peter’s ready to start on the feathers. Wilfie and Frankie search for eels in the creek; a rare New Zealand dotterel mounted for DOC, Waikato.

There was a time when he thought these were stuck on with glue. “I remember when I was seven or eight watching my father plucking a pheasant into a Kleensak and thinking to myself, ‘How in the hell do you get all those feathers out of the bag and back onto the bird?’ That’s what I thought taxidermy was.”

He’s learned a great deal since then but he was right about one thing: feathers do maketh the bird and it requires a great deal of patience to get them just right.

First, the petrel receives a brisk blow-dry and then each ruffled feather is preened into position with a long steel needle, just as a live bird would do with its beak. It’s taken all day but the end result is quite stunning.

From its bright, beady eyes to the glossy tip of its tail, the once-broken seabird is now back on its feet – preserved for posterity and ready to serve as the poster bird for its species. 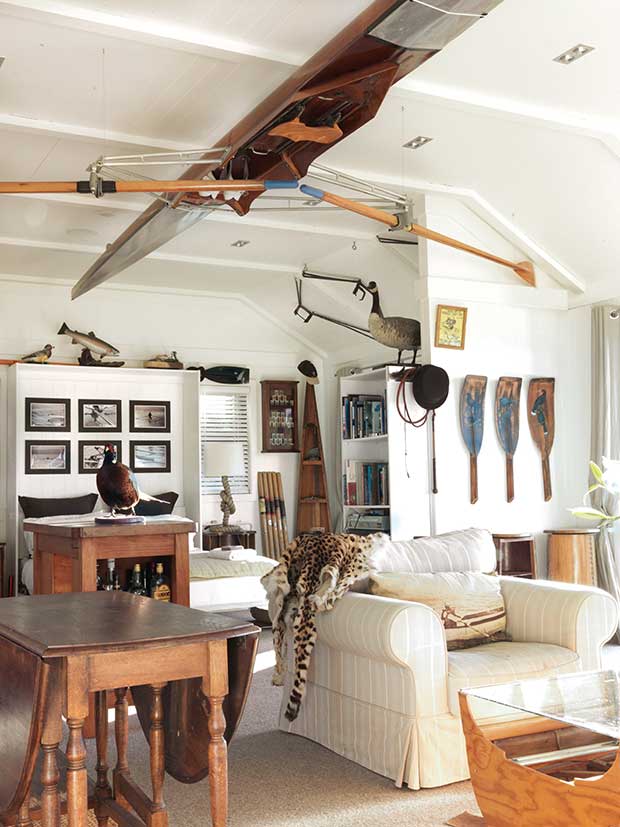 The guest studio is so named because it houses Peter’s collection of rowing memorabilia, including a fully restored wooden skiff that hangs from the ceiling. It also doubles as a showroom for his taxidermy and his secondary business supplying a range of shooting and fishing accessories, notably his own brand of carbon-fibre field sticks.

He is curently the only taxidermist in New Zealand offering tuition.

Courses are tailored to suit, use a variety of mounts and cover every aspect of taxidermy from conventional techniques to freeze drying. wildmount.com

BIRDS IN THE HAND

“Richard Henry the kakapo is the most significant mount of my career. He was the last surviving kakapo in Fiordland and the father of the Kakapo Recovery Programme, making him the world’s most famous kakapo. He now resides in the DOC office on Stewart Island.

“The bird I’d most like to get my hands on is a gannet.

They are incredibly striking birds with so much character and expression in their faces and eyes. Capturing that is the secret to a successful mount.

“I found pheasants challenging at first but I’ve definitely got the measure of them now. They are majestic-looking birds and lovely to have around the property.

“Kereru are a taxidermist’s nightmare. They lose their feathers very easily and their skins rip like tissue paper, whereas a tui has skin that’s as tough as old boots.” Peter Wells 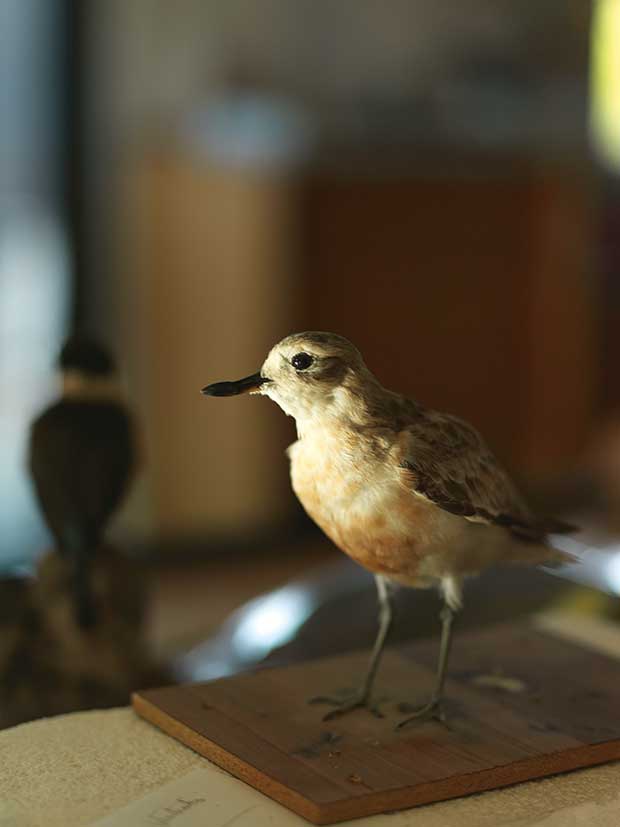 Modern techniques have improved the look and the preservation of animal mounts but they still require some attention.

Peter warns against displaying a mount in direct sunlight or near a heat source such as a fireplace and he advises regular dusting.

It’s the dust that makes mounts look old and faded. Fish can be wiped with a damp cloth; use a feather duster on anything else. To avoid mounts looking cock-eyed, ensure they are hung with their eyes parallel to the floor.