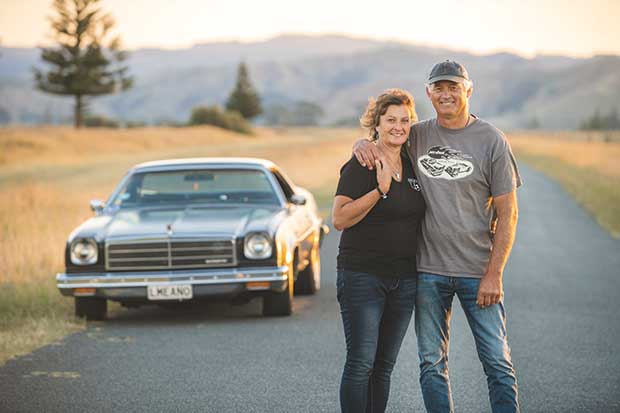 Backcountry Gisborne is full of surprises. Here’s an unexpected sight sweeping around a corner right now.

In the Gisborne hinterland, a 1974 El Camino ute with a rough paint job, a dodgy backstory, an elongated Mercedes-style grille and a pumping V8 350-cubic-inch engine is devouring the bends.

That’s surprise enough. But now comes a second — the ute’s owner. No bloke with a mullet around here.

Gisborne farmer Caly White bought her monster American pickup with money she had saved for a new country kitchen, and has never looked back.

“Everyone thought I was nuts,” says Caly, adjusting the El Camino’s auto column shift capped with its chrome skull. Everyone apart from her husband Roger and the kitchen salesman who came out from town to finalize his quote. Caly was upfront with the kitchen rep. “When he arrived I said, ‘I’m sorry but I might not go ahead because I’ve found a gorgeous ute on Trade Me,’” she says.

Instead of getting out his tape measure, the salesman looked at the ute online. “He said to me, ‘If you love it you should get it because you only need a sink and a barbecue for a kitchen.’”

An AA check gave the El Camino a thumbs-up, and it was transported from Wellington. 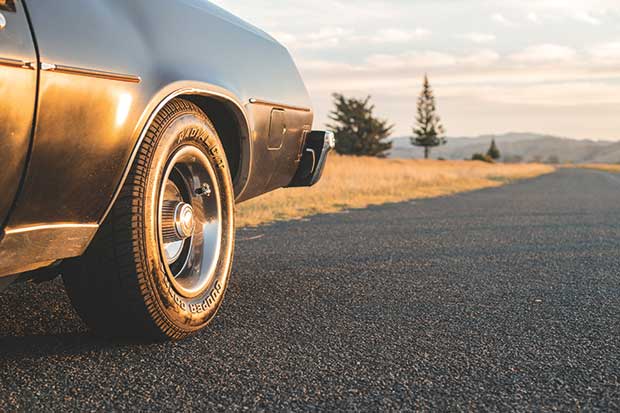 “It was an exciting moment. We were out drenching lambs when we heard it coming up the valley,” says Caly.

On arrival, the big ute didn’t disappoint. It was better than the photos and in reasonable condition inside and out.

“It’s had a fair few owners and seems to have changed hands every six months to two years. We have a hunch it may have been used in money laundering, we weren’t so sure about the white powder on the carpet, and the left rear tyre was bald, so it had done plenty of doughnuts.” 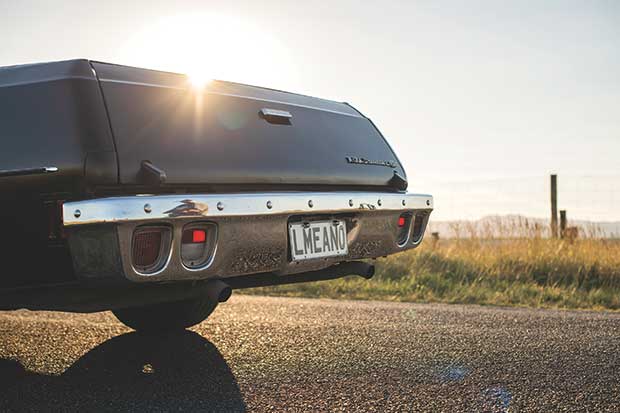 The El Camino may have been transient before landing in the care of Caly, but now it is home for good.

“It’s ugly, tough and impractical — if we go away for a weekend we have to store our gear in rubbish bags and shove them behind the bucket seats because there’s no tarpaulin for the back deck. But I feel blessed every time we cruise in it and very privileged to own it,” she says heading eastwards.

Caly’s machine with its close-ratio three-speed auto transmission, disc brakes and power steering is like a flying couch. “The seats are super comfy, it’s easy to handle once you get used to the left-hand drive, and it gives you such a cool, chilled-out feeling.” 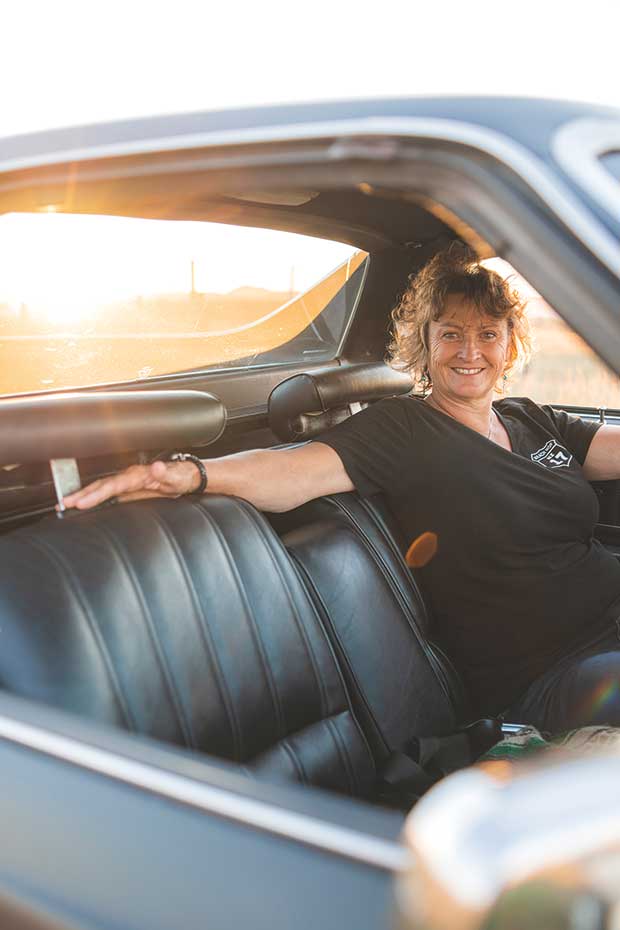 She has equipped it with a new set of wheels, had its carburettor tuned up, and the driver’s door realigned. “It has a wee bit of rust, leaks the odd bit of oil and soaks up a fair bit of gas. It has a huge petrol tank designed for crossing a desert.”

Launched in 1959, the El Camino (Spanish for the road) was auto-giant Chevrolet’s answer to a car-and-truck combo. The public was hungry for a stylish truck with big-block grunt, two- to three-person carrying capacity and a whacking rear tray. 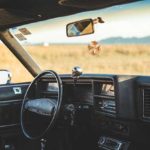 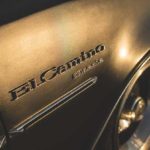 The original 1959 model sustained a raft of modifications to form, engine, transmission, body, running gear and styling over five generations (Caly’s is the fourth) until Chevrolet stopped making it in 1988.

More stories you might like:
From costumes to cakes: How an Auckland designer made the switch to a foodie career in Dunedin

Utility vehicles have always been in Caly’s orbit. She grew up on a farm in the Whātātutu Valley where utes outnumbered cars. “If you didn’t get your driver’s licence when you turned 15, you were stuck up in the hills.” 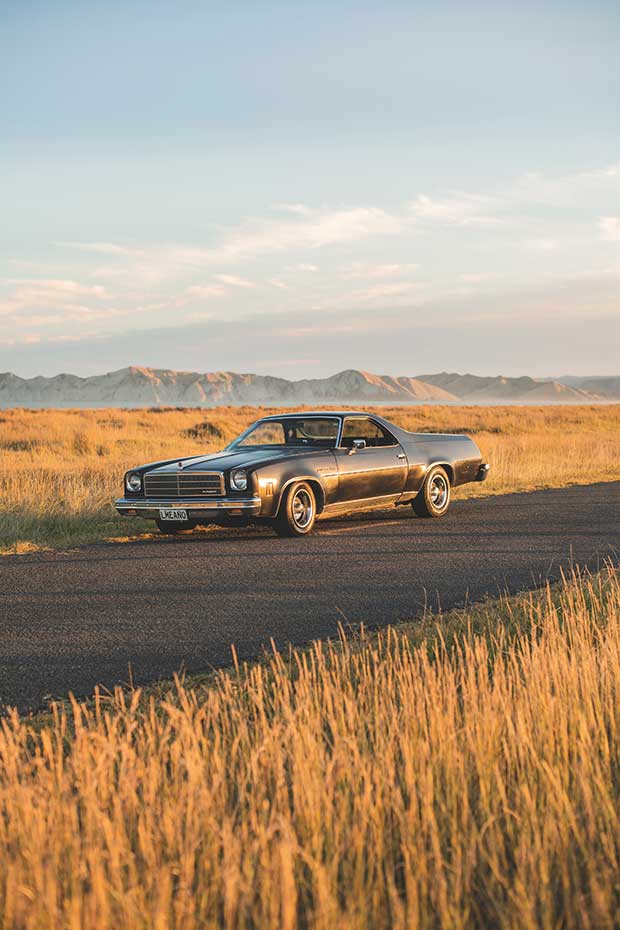 When she was 10, Caly’s older brothers cajoled her into steering their hay carriers. From the ripe old age of 12, with her father alongside, she was allowed to drive the family’s Land Rover along the five-kilometre stretch of gravel road between school and home.

“I was interested in cars and trucks from the age of five.”

While at high school in Hawke’s Bay, she inherited a 1970s Hillman Hunter from her godmother. Those sturdy wheels served her well on road trips between school and farm and later Lincoln University where she studied horticulture.

Caly’s first foray into ute ownership 10 years ago was a disaster.

“I bought a top-of-the-range 1985 Subaru Brumby ute with twin halo-moon roofs, and it was a lemon. The final straw was driving home loaded up with farm gear, and the engine caught on fire.”