The mischievous goats behind The Drunken Nanny’s award-winning cheese 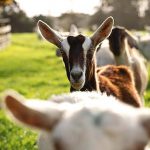 Lottie, a british alpine, takes a keen interest in the photographer. 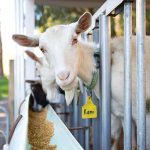 At milking time, the goats can’t wait to get onto the stand where they are fed a specially formulated grain mix containing maize, barley, peas and molasses. 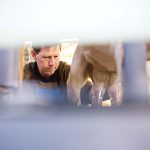 Lindsey is foreman of milking then the rich, raw product is passed on to Amanda who works her magic turning the milk into fresh cheeses 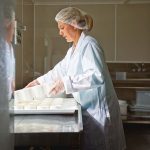 Amanda in the cheese room. 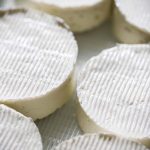 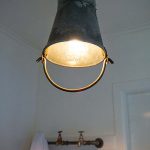 The on-site cheese room is a sterile zone where the lightshade is made from an old stainless-steel bucket; 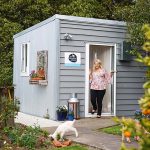 The exterior of the cheese room. 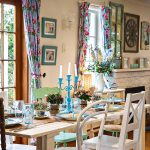 The dressed-to-thrill dining table was fashioned by Lindsey from an old door found in a shed. Some of the distressed chairs were bought at a second-hand shop in Carterton. 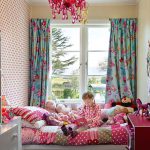 Amanda is a fan of the shabby chic look and has dressed the farmhouse with country-style colour. 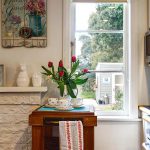 In the kitchen, the butcher’s block was a wedding present from the couple’s good friends, Jackie and Joe. 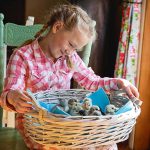 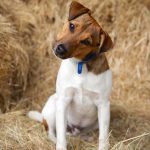 Ted is a jack russell/fox terrier cross and is almost as mischievous as the goats. “He likes to play games with them,” says Amanda.

Naughty yet loveable, the Goodman family’s goats are not just pets but the raw and rather vocal talent in a cheesemaking success story.

Ten-year-old Emily Goodman has a special talent. She can recognize and name every one of the 80 goats on the family property south of Martinborough by the pinkness of their noses. It’s a skill that comes in useful when a resourceful kid manages to escape a pen, scale a fence, wiggle in through the cat flap and nibble contentedly on the scatter cushions. Emily can identify the culprit. 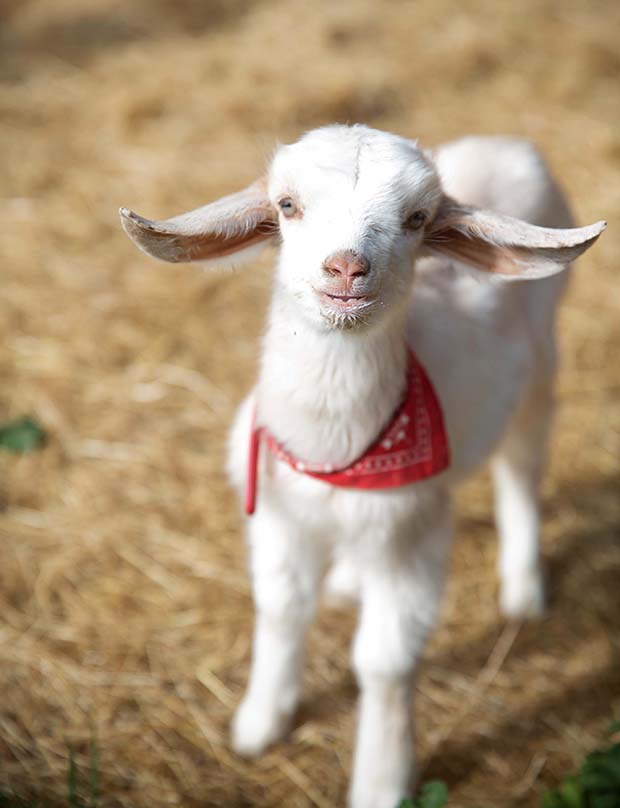 Missy the kid wears her kerchief with pride. While all the Drunken Nanny goats are named, the three Goodman children chose one kid each as a pet to be kept in a separate pen.

Not that there is likely to be much punishment for such kidding around. Emily’s parents Amanda and Lindsey Goodman are completely charmed by the mischievous nature of their friendly flock. “They’re part of the family,” says Amanda.

At first glance, their weatherboard cottage built in the 1960s looks a typical specimen. Painted off-white, it sits close to the road on this 290-hectare sheep and beef farm. Concrete stairs lead up to the veranda but closer inspection reveals the pots of spring tulips at the front door have been brutally cut off in their prime. Gardening and goats are not natural partners. 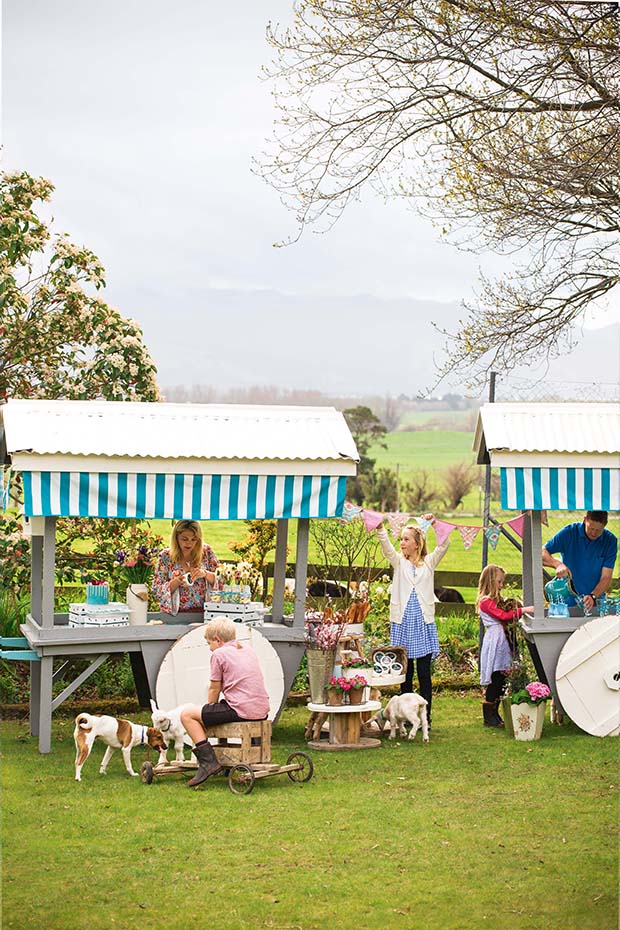 The family occasionally hosts tasting days in the garden. The restored carts once used in Greytown to sell plants are festooned with bunting and visitors taste cheeses such as Black Tie, a pyramid-shaped, ash-enrobed chevre-style cheese, along with a Cheeky Camembert.

Amanda loves pastels, particularly pale pink and duck-egg blue, so the interiors with cork floors and pretty floral fabrics have a Cath Kidston-meets-Kiwi-casual style. But before settling into the rolled-arm couch in the front room, be sure to take a second glance in case Gracie has made herself at home in its cosy capaciousness. 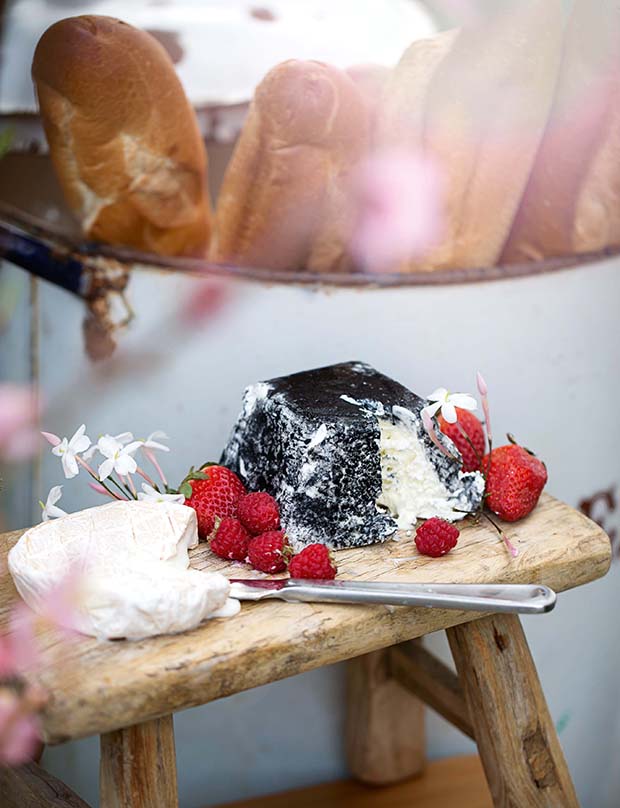 “Gracie was born six weeks premature so we hand reared her and she became very ‘humanized’,” explains Amanda.
Sharing the sofa with the odd ungulate and random incidents of sacrificial vegetation does not deter the Goodmans. In fact, diversifying into goat breeding and cheesemaking has been a blessing in every way.

Amanda’s parents, who own the farm and live in a house just over the fence, were part of the mohair boom in the 1980s. “I remember playing with Petra, my pet angora, who was an absolute character.” 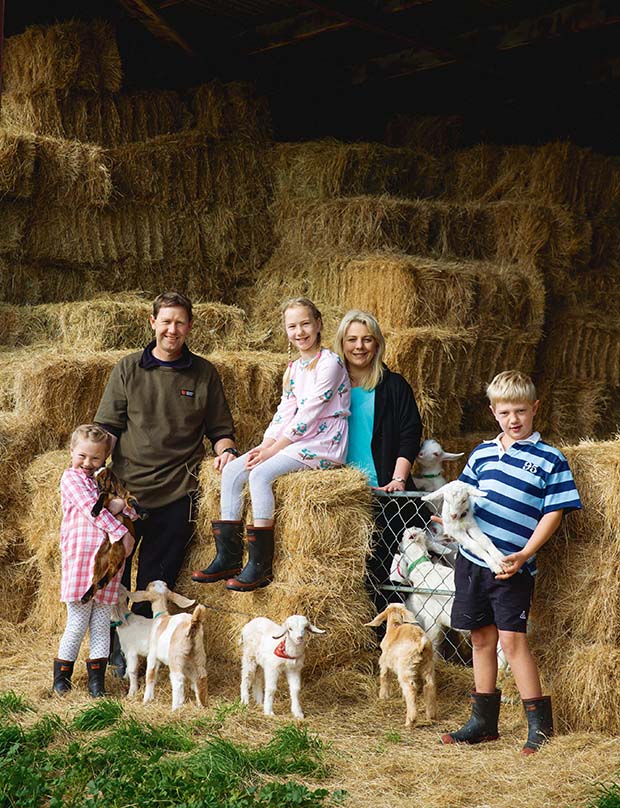 When the couple’s children Emily (10), Samuel (8) and Phoebe (6) were old enough, she wanted them to have a similar experience. “I still had a hankering for goats so we got two as pets.”

It was the beginning of a beautiful friendship. All the children love the goats, but Emily is a natural at animal husbandry. She keeps a spreadsheet of every newborn addition and her grandma gave her a baby-name book to help in their christening.
“Dinner-table discussions around kidding time are always very lively,” says Amanda. 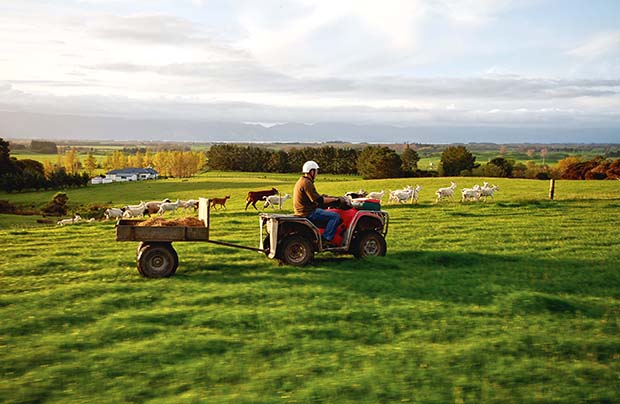 Keeping the goats well fed and entertained is a full-time responsibility. Here Lindsey heads out on his four-wheeler to feed out hay.

Since there was no dairy co-op collection of goat milk in the Wairarapa, making cheese from the rich milk gleaned from their growing tribe of saanen and nubian goats was the next option. Amanda, who has a degree in marketing from Victoria University, threw herself into the research. While she studied, she also attended a number of short courses at The New Zealand Cheese School in Putaruru.

For a while, the children were not best pleased. Instead of the comforting aromas of baking wafting from the kitchen, there were the slightly sour tones of milky madness – and a sink and sideboard piled high with stainless pans.

“There was a lot of trial and error, learning the milk and how to adjust when there were environmental changes.” Gracie grabs her chance to steal a grape from the kitchen table.

The children heaved a collective sigh of relief when, in December 2015, production moved from the house to an old shed which was gutted and relined with washable walls. A maturing room, which took up half the vege garden, was added alongside.
Amanda introduced her first batches of cheese at the local Te Kairanga markets, and the punters were full of praise. “For many, the traditional idea of goat’s cheese is tied to the whiff of smelly old socks,” she says. “I really got a thrill out of showing how mild and clean the cheese can taste.” 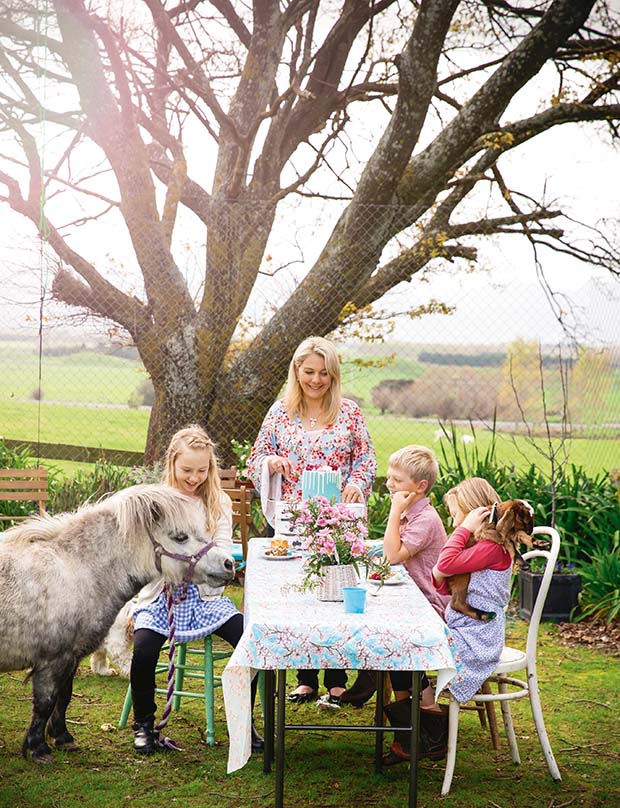 Community support, she says, has been phenomenal. The name The Drunken Nanny was born one tipsy evening at a get-together with girlfriends. It was in the middle of a drought, when Lindsey was worrying about the dry grass and how to meet the nutritional needs of the goats.

“For many, the traditional idea of goat’s cheese is tied to the whiff of smelly old socks. I really got a thrill out of showing how mild and clean the cheese can taste.”

A friend whose partner is a winemaker made the tongue-in-cheek suggestion that they feed them grape skins. It didn’t take long before the crew were visualizing these goats stumbling around inebriated. Amanda: “The Drunken Nanny also coincides nicely with the idea of pairing cheese and wine, relevant when the product comes from a grape-growing area.”

It’s Lindsey’s role to keep the goats healthy, happy and well fed. “They get bailage, meadow hay, lucerne and a special grain mixon the stand while they’re being milked,” he says. Every day, too, they’re drenched with a hand-mixed, organic super tonic. “It’sour own combination of seaweed extract, cider vinegar, honey and garlic.” He is hand-selecting the best milk producers to develop a stronger bloodline.
Amanda acts as artful technician, dressed in whites, gumboots and a hairnet while she develops her repertoire. First off the block was Frisky Feta – a firm, brined cheese with nutty flavours. Lush, a smooth, spreadable fresh cheese with a slight tang, is as popular with the family as it is with the public. 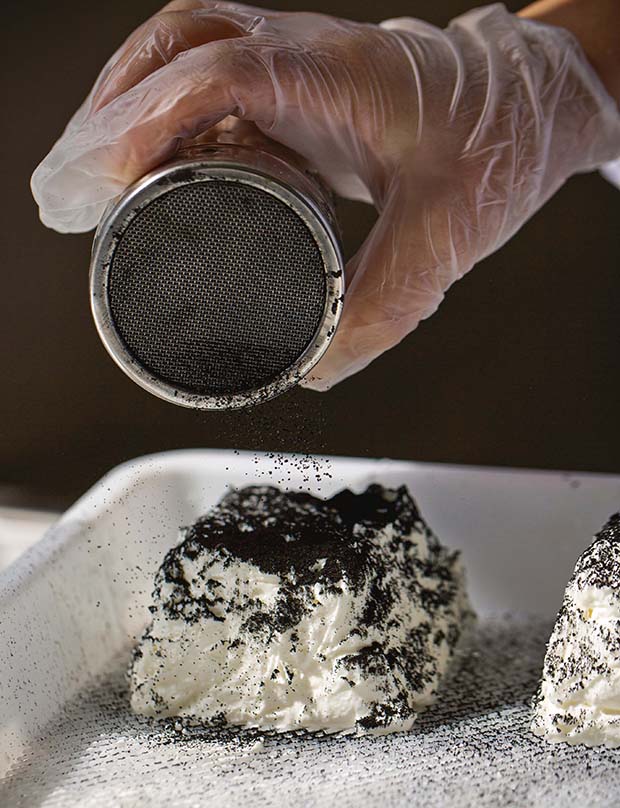 Young Phoebe loves it with berries in mini tartlets while Lindsey plunges sesame-seed crackers into a pottle for morning tea before hoofing it back out to the paddocks. Cheeky Camembert and Savvy Washed Rind cheeses followed and finally, a gourmand’s dream, Black Tie – a fresh goat’s cheese enrobed in ash.
Working eight to nine hours a day, every day of the year, means enough flexibility for family time but not much opportunity for holidays. “Once you throw in the packaging, admin and all the other bits that need to be done, it’s truly labour intensive,” says Amanda.

Meanwhile, Emily has already “kidded” her first young ’un, helping out a mum who was having problems by pulling the baby out by its feet. Although she proclaims the experience “slimy and gooey”, the smile on her face says it all. At night, Emily falls asleep to a chorus of bleats just outside her bedroom window. 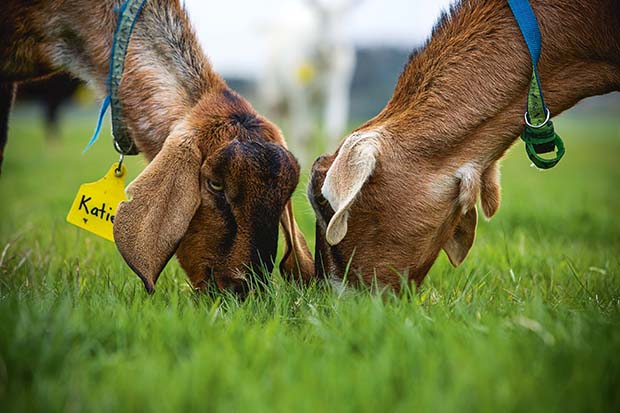 By year’s end, The Drunken Nanny hopes to be turning 130 litres per day into cheese and Amanda, a new kid on the cheese block, has already achieved across-the-board accolades. After less than a year in business, to gain three silver awards and one bronze at the 2016 New Zealand Champion of Cheese Awards is a significant achievement.

Amanda is pleased that cheesemaking adds another string to their bow. The goats that have brought much laughter and moments of mayhem to the household are helping to ensure the continued sustainability of the place she grew up in. “I’m enjoying it all,” she says. “Farming is my happy place.” TLC FOR GOATS
♥ The Goodmans’ free-range flock is a mix of white or cream saanen goats and brown anglo nubians, which have long, floppy ears and produce milk with a slightly higher fat content.
♥ Goats can fall ill quickly so they’re checked daily.
♥ They are very susceptible to the cold so should always have somewhere cosy to retreat to.
♥ CAE is a type of virus that causes arthritis in goats while Johne’s disease is a fatal gastrointestinal condition that can be hard to spot. Reputable breeders test for this disease regularly.
♥ The baby goats are dehorned so they don’t
get wedged into fences and the like.
♥ The Goodmans like to give their goats “play things” in the paddock, particularly structures they can climb onto (without being able to jump the fence). 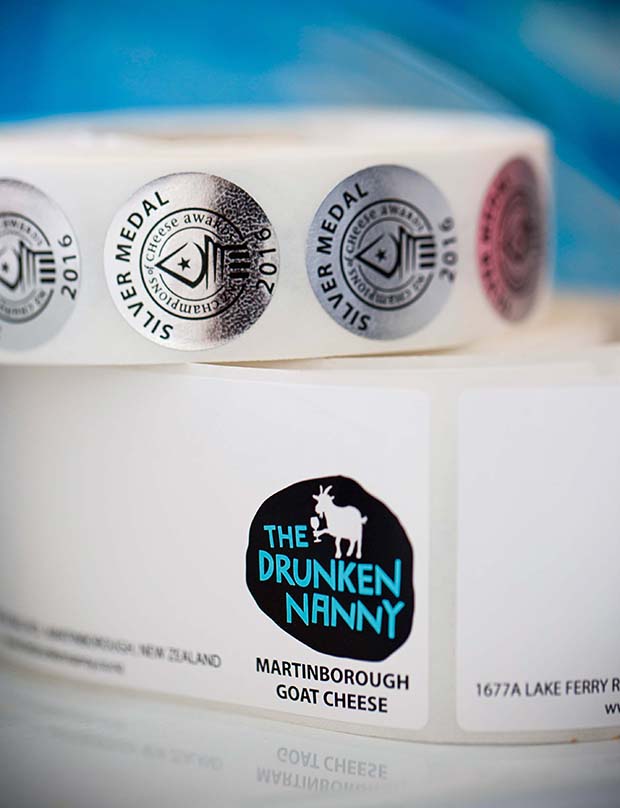 * Establishing the brand within the local market was the first priority. It was officially launched in December 2015 at the Martinborough Wine Merchants, an enterprise that supports and sells a range of artisanal products.
* Amanda built up a good following within the Wairarapa by regularly attending weekend markets in the area. The cheese was also stocked at the Martinborough Four Square.
* A sales visit to gourmet food store Moore Wilson’s in Wellington got the fresh cheeses on the stock list, positioning the product perfectly alongside other “restaurant-quality ingredients”.
* Amanda developed a close working relationship with some of the region’s best chefs. When Marc Soper from Wharekauhau Estate earned the title Chef of the Year for a dish that featured her Lush goat’s cheese, the ingredient was put firmly on the foodie map.
* Participating in Wellington on a Plate meant the opportunity to introduce the hand-crafted cheese to some of the city’s top chefs at a special pre-show event. The Drunken Nanny cheeses ended up featuring on no less than six menus.