Moa and tohorā in Wellington: Exploring the natural world with award-winning author and illustrator Ned Barraud

A small pond, shining in the morning sunlight, is centre stage in Wellington illustrator and author Ned Barraud’s Karori front garden. Peer into its still, clear waters for a glimpse of a tiny kingdom of native aquatic plants, snails and water boatmen, plus several jewel-coloured goldfish, non-endemic interlopers.

The pond is a thriving mini eco-system, says Ned. It took a long time to achieve the correct combination of plants and animals to deter algae, but the result is the pond no longer needs cleaning. “It just keeps its natural balance, which is pretty cool.” 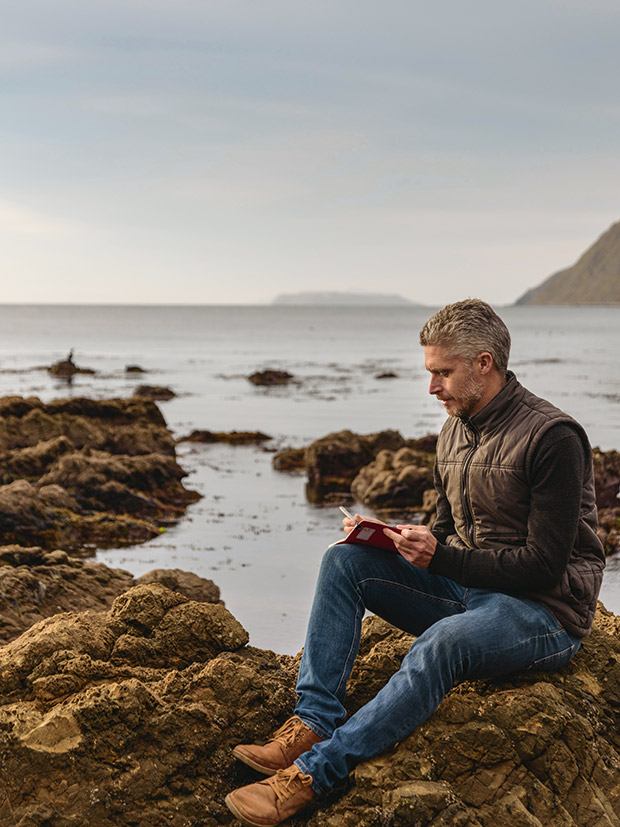 Ned is a frequent visitor to wild, windswept Mākara. “The sea is constantly changing and gives a feeling of freedom and spaciousness.”

This search for equilibrium also sums up Ned’s life. For 15 years, he was a published illustrator – producing award-winning children’s books – while working full time in the film industry and raising a young family. It was challenging, and his life felt out of kilter.

But, now, thanks to a little creative work/life juggling, he says he’s found the right balance and can now continue creating the books that give children an inspiring insight into Aotearoa’s extraordinary, often elusive, natural world. 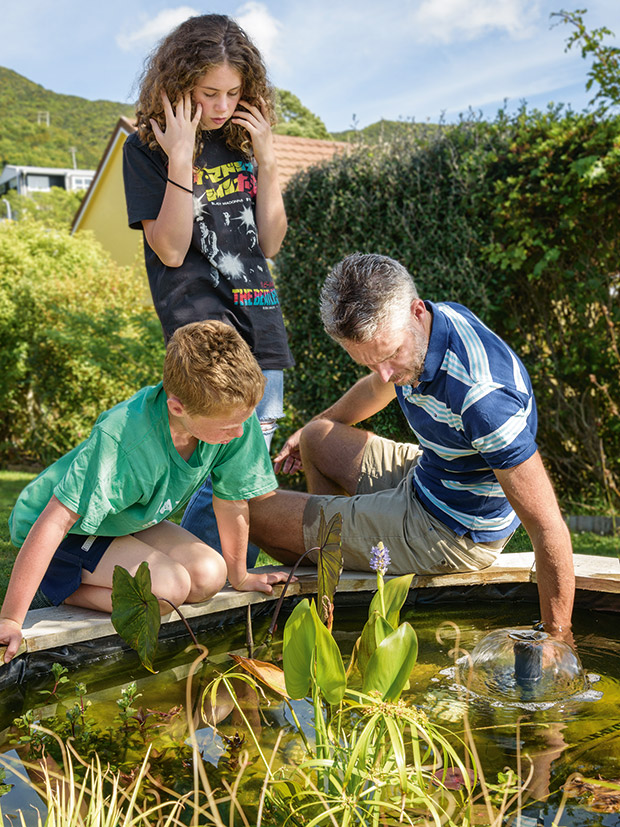 Ned Barraud and his children, Alfie (9) and Leila (14), engage in a real life seek-and-find by their pond; Ned’s art is inspired by “strange creatures — real or fanciful”

Ned is the author/illustrator of several books including Tohorā: The Southern Right Whale, Rock Pools: A Guide for Kiwi Kids and New Zealand’s Backyard Beasts. Along with author Gillian Candler, he is also responsible for the popular Explore & Discover series, which includes the prize-winning At the Beach. All his books are published by Potton & Burton, which specializes in New Zealand non-fiction.

Before being able to illustrate full time, he was a senior texture painter at Wētā Digital, responsible for digitally painting surface textures on characters, environments or props. “I worked on all the big ones from The Lord of the Rings onwards.” Long days in post-production and the demands of bringing up three children – Rory, now 16, Leila, 14, and Alfie, 9, with wife Niamh Short – made life busy and happy but left illustrating shoehorned into his evenings. He pressured himself to make the books happen.

In 2016 Niamh, previously at home with the kids, started a builder’s apprenticeship. Ned was still full time at Wētā and producing books in the evenings, Niamh was training and getting her company, Windy City Builders, off the ground. Life was relentless and hard work. “Despite our best efforts, our home life was complicated and highly managed.” 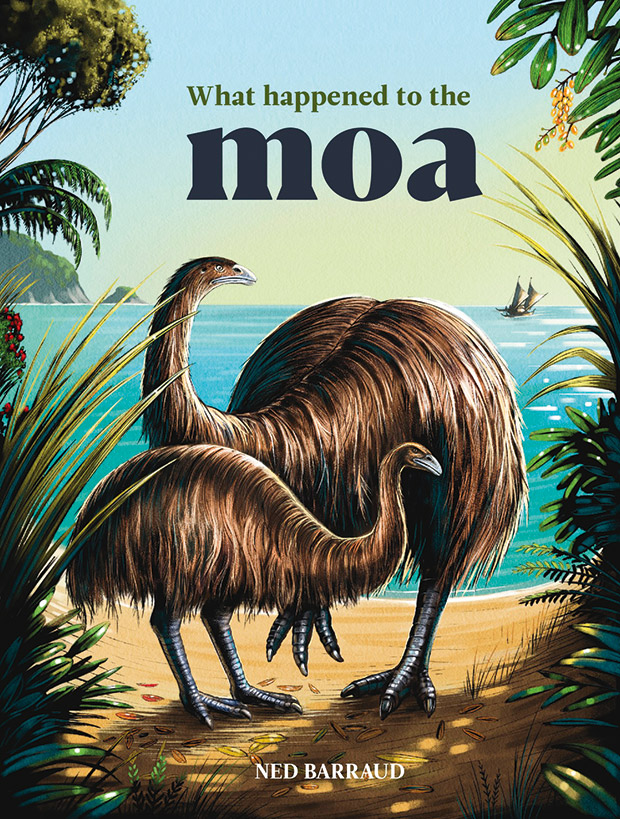 Last May, Ned’s Wētā contract was not renewed. This turned out to be a great opportunity of change for the family. He now works from home 25 hours a week, allowing him to focus on his books and illustration, and is the family’s primary caregiver. Niamh, meanwhile, can fully focus on her career and company, knowing she has support and back-up at home.

“We swapped roles. We had to tighten our belts a bit, but it’s been easier than we thought. Neither of us miss juggling all the balls.”

Niamh, one of the capital’s few female builders, says she uses her psychology degree and the same skills she used running the house on delegating sub-contractors. The project management required to help clients transform their homes into beautiful, workable spaces is hard work, says Ned. “Running a company is demanding. But she’s super-organized and likes to run a tight ship,” says Ned. 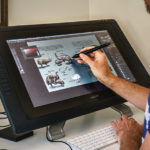 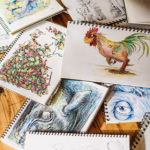 As for the kids, there are more chores and fewer cakes on Ned’s watch, but he’s a happier and more relaxed dad, and no longer just the guy who makes an appearance during the stressy breakfast-departure and evening-dinner-bed routines. He’s involved in school schedules and social calendars. “We have a much closer bond now than before. I find it satisfying keeping the show on the road.”

Every morning, he works for three to four hours on his books. A quiet house and hot coffee get him into the zone. He has time to pick up other illustration jobs, and recently released a series of extra-large format puzzles for Holdson. The Seek & Find series features four different wildlife scenes. It feels incredible, he says, to work “when I’m feeling inspired, rather than doing it under duress”. 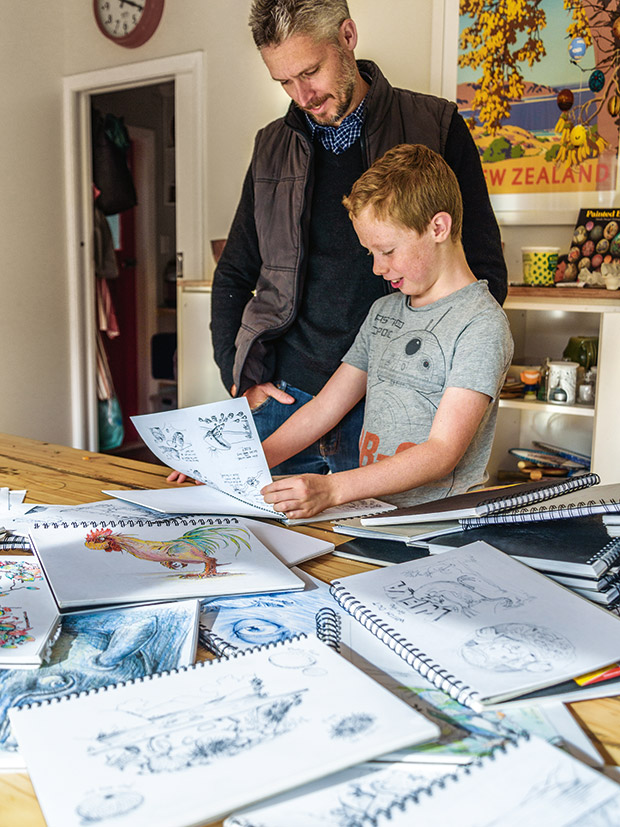 Ned has passed the art bug onto his children, especially Alfie.

Ned has been illustrating children’s books since 2000. Before that, he studied for a couple of years at art school in Dunedin and took a gap year in Ireland, where he met Niamh. He graduated with a degree in illustration from Victoria University in 2001.

Creating children’s books was always something he wanted to do, right from the get-go. “The kids’ books I read have always stayed with me; I remember the impact they made.”

His favourites include books by Theodor Seuss Geisel (Dr Seuss) and Maurice Sendak (Where the Wild Things Are), as well as stories specific to a Kiwi childhood, such as Margaret Mahy’s The Lion in the Meadow. Robyn Belton, who illustrated Joy Cowley’s Greedy Cat series, was a big influence. 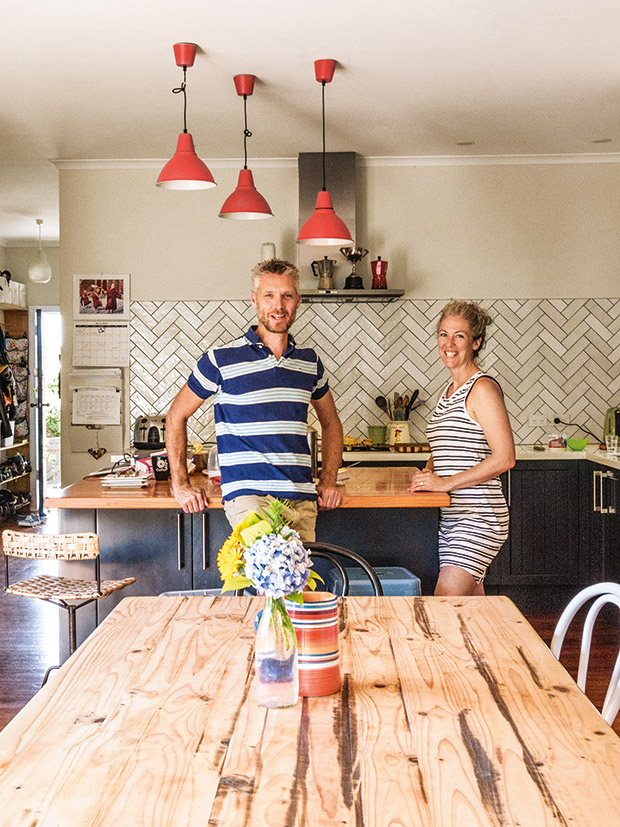 Ned and Niamh met in a pub in a remote Irish village. “A game of pool got the ball rolling. Niamh won it, by the way.” The idea for Ned’s book Backyard Beasts came from exploring his garden with his kids.

Ned says that despite the age of iPads and Kindles, children’s books can’t be replaced. “That actual hard-copy kids’ book that you can sit down with and flick through the pages and be immersed in.”

His lifelike drawings provide a glimpse into the lives and habitats of everything from giant squid and humpback whales lurking within the depths of the Pacific Ocean, to now-extinct moa and mosasaurs, and even the stick insects and spiders in the backyard. Or, as Ned puts it, many of his books are about wildlife: whales, weka and wētā. The illustrations in the Explore & Discover series are not only beautiful but factually correct, thanks to the input of scientific consultants. Ned’s brother Josh Barraud is the exhibition installation manager at Te Papa and has introduced Ned to expert contacts.

Ned gets his inspiration from nature. He enjoys mountain-biking, tramping and running in the hills, with his dog, Tinkerbell, a “bitser”- a bit of labrador, a bit of huntaway, a bit of something else. His Rock Pools guide came about, he says, because he’s spent so much time rock-pooling with his kids.

“All three have been completely fascinated by them. Our youngest, Alfie, is constantly asking to go.” 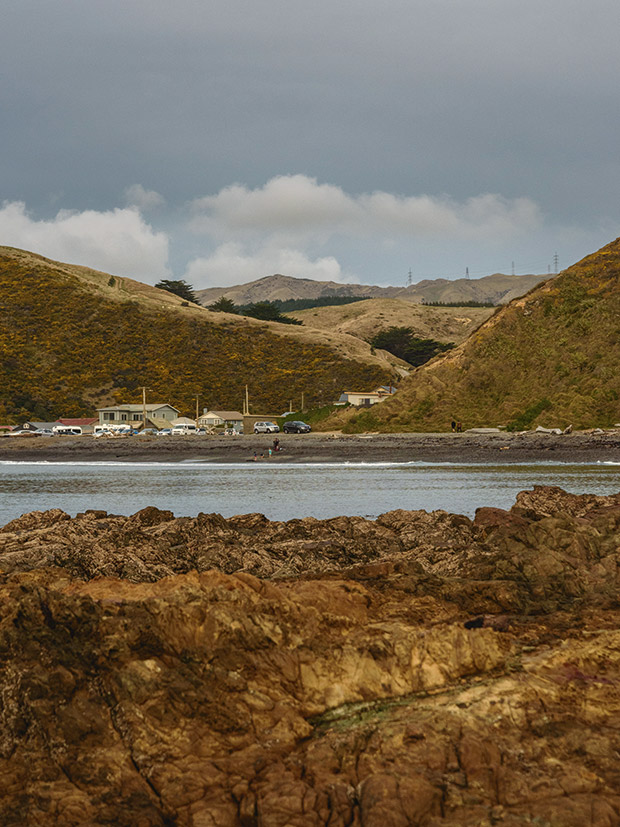 Illustration has long been his main focus, but he has always written. “I have stories that I want to tell, and I enjoy both.”

He starts by drawing small thumbnail sketches, plotting out an entire book. Illustrations are then created by drawing and painting directly onto a Wacom Cintiq Pro tablet, hooked up to an iMac. He says the tablet has revolutionized the way he works. “It feels so natural; you’re just drawing as normal.”

Ned had few computer skills before training at Wētā. His art background and design degree were enough to get him started. “That was back at the start of The Lord of the Rings days. It wouldn’t happen now.” The rocky shore has always fascinated Ned. “I spent a lot of my childhood dipping my hand into rock pools.”

He grew up in Nelson, which inspired his love of the sea. The family spent time aboard their launch, Scuffy, exploring the coast of the Abel Tasman National Park. He remembers a pod of pilot whales coming right alongside the boat. Each creature was about five or six metres, the length of the boat. “You could see every detail – you could see the scratches on their backs where they go down and rub their backs on the bottom of the sea.”

More stories you might like:
The Kiwi connection at Wardington Manor: How Bridget Elworthy and Henrietta Courtauld are revolutionizing cut flowers in Britain

Now he lives in landlocked Karori, one of New Zealand’s largest suburbs. It’s family-friendly and close to the capital’s CBD, but it also has a wild side. Tūī, kākā and kererū are abundant thanks to the eco-sanctuary Zealandia, with its 225 hectares sprawling across nearby hills. Karori has mountain-bike tracks, hiking and walking trails and excellent parks.

The coastal suburb of Mākara, where Alfie attends the local primary school, is less than a 10-minute drive and has, according to the Barraud/Short brood, some of New Zealand’s best rock pools. 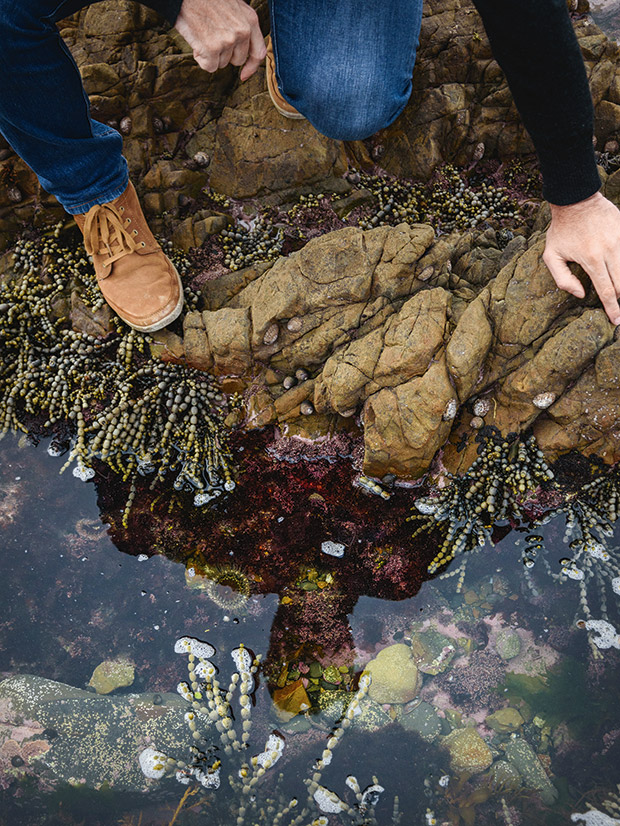 Meanwhile, many of the creatures in Backyard Beasts were drawn in Ned’s garden. They include his favourite animal, the praying mantis. “It is an incredible product of evolution thanks to its 360-degree vision, which allows it to catch prey at lightning speed. They’re like this little assassin, and they can also fly. They’re miracles of nature.”

Ned hopes his books will stoke children’s curiosity and encourage them to interact with nature. There’s never been a more critical time to do this, he says.

“If I can do anything to get kids interested and involved in nature, then I feel like I’m doing something, something good. Get them out into the bush, out into the rock pools, and if they’re enjoying it and loving it, then that’s the best thing I can do.”

WHALE’S TALE: A STORY OF HOPE

Most of Ned’s books have a New Zealand theme but now that he has more time, he’d like to do more dinosaurs as well as well as more international work. After all, the local market is frustratingly tiny. He is working on two books for release in October — What Happened to the Moa?, which seeks to unravel the story of Aotearoa’s legendary flightless bird, and a look-and-find book called Where is it? A Wildlife Hunt for Kiwi Kids.

Ned’s books are usually aimed at all ages, but he concedes the moa one might be more for nine-plus. “It’s a dark story. Moa pretty much got slaughtered to extinction; they had a rough time. So it’s a bit more graphic and gory.”

Tohorā, one of his favourite books, was inspired after a southern right whale, or tohorā, spent Matariki in Wellington harbour in July 2018. Ned expanded the story to educate children on tohorā history.

It explains how the whale’s destiny was intertwined with the coming of the first white immigrants to New Zealand: the whalers and sealers. It also shows how tohorā came back from the brink of extinction, thanks to the efforts of environmentalists.

“It’s a story I feel proud to have told. It’s all such a huge part of our history, yet not many people know about it.”

Moa suffered a tragic fate, but the tohorā’s tale is one of hope, says Ned. “If we get together and want to save wildlife, then we can.” nedbarraud.com