Murder, she wrote: How Vicki Virtue’s love of detective novels turned into a career of cliffhangers 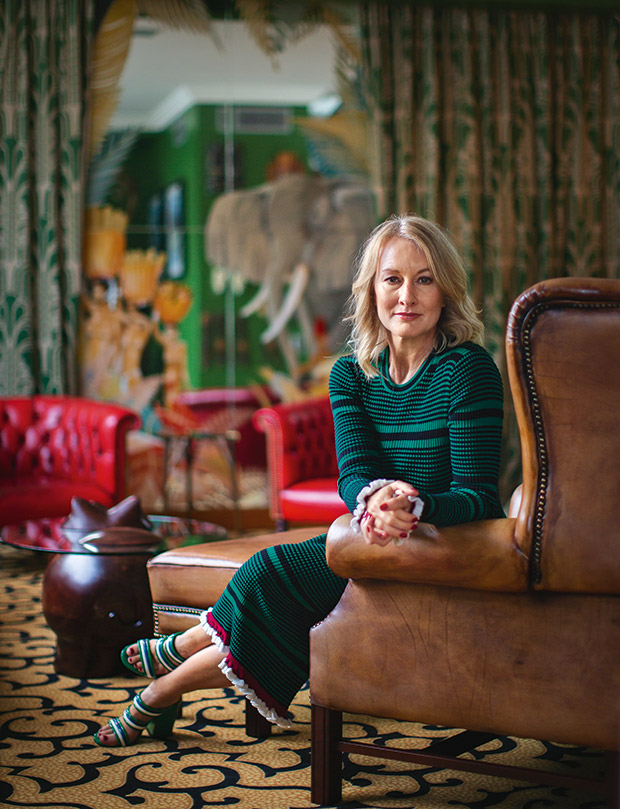 Detective novels were such fun to read, this travel writer wondered if they would be as much fun to create. She found out.

It was the Arab Spring, so few other tourists were about and Vicki Virtue, on holiday in Egypt, had the dahabiya almost to herself. It was a beautiful vessel, and it sailed serenely up the Nile, its sails snapping softly in the cooling breeze.

The sun gleamed on its polished wooden deck, and hammocks swung peacefully in rhythm with the rocking tide. The helmsman leaned lazily on the tiller, idly rolling up the sleeve of his white galabeya.

The SS Sudan had put in a timely appearance, splashing past, its paddlewheel leaving a trail of froth. Agatha Christie wrote Death on the Nile after her cruise on the SS Sudan, and Vicki is a tremendous fan of Mrs Christie. The raucous ibis is associated with Thoth, the Egyptian god of wisdom, and — most tellingly — writing. The green feature wall is home to a memento atlas of Vicki Virtue and partner Roy Savage’s travels.

Was it an omen, was it merely subliminal? Who knows, but then and there, Vicki decided on the genre of the novel she itched to write: murder. And not a thuggish killing in a penny dreadful, but a double-crossed and startling affair in a luxurious and exotic setting, with a Christie-worthy cast of suspects, a beautiful spy-cum-sleuth and a classic Poirot-style denouement.

Despite this resolution, Vicki had doubts about her ability to write a novel. Her background was in advertising, although she had stumbled by chance into travel writing while exploring Libya. She loved her Libyan adventure and couldn’t wait to tell people back in Aotearoa how wonderful the country was, how maligned it had been, chiefly courtesy of Western politics and media.

She relayed this to some professional travel writers she met there. One said that if she wanted people to know, well then, tell them. Write a story; send it to a newspaper. “I was astounded. Write? Write a story?” she laughs. Vicki never tires of the first great detective novel she read – The Moonstone by Wilkie Collins — and what better place to re-read it but a period-appropriate chair? Above the floor globe, the startling mounted fish is the Sludge Tarpon, one of seven Marine Muggs created for Standard Oil in America. The creator was an oil industry ad man, Theodor Seuss Geisel, now better known as Dr Seuss.

“I could write advertising briefs; I could write reports. But write an emotional, travel article? But I decided to give it a go. And by ’a go’, I mean I did about 10 drafts before coming up with something I thought was passable. I sent it to the New Zealand Herald. It wasn’t until I got to Mali that I finally found a sketchy satellite connection to the internet again. To my surprise and excitement, they had accepted my story. Not only that, but the editor was asking for an invoice. I was going to get both published and paid.”

There were more travel articles (including one on climbing Mt Kilimanjaro in NZ Life & Leisure, May/June 2011) and other advertising roles in London, Dubai and Singapore. She eventually returned home; and, when she was least expecting romance, met her
now-partner, Roy Savage, a financier.

As a welcome anchor to her natural restlessness, Roy was the person who helped her settle, and eventually, there came a time when she once again thought about the feasibility of writing a novel. She knew she couldn’t get her head around sci-fi, the same with dystopian tales, perhaps not romance and a definite no to horror. 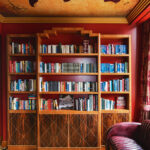 The map on the ceiling of Vicki’s library and writing room reminds her of all the places she has been and those she still intends to visit. 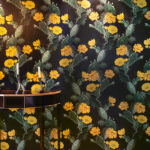 The lovely art deco hall table is, in reality, a new piece, made in the deco style, yet its deep lustre and craftsmanship would make even a close observer believe otherwise. The wallpaper is from Kingdom Home in Sydney. The carpet is based on a design by Russian art deco artist Erte and was made in Denmark. 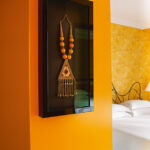 Her favourite book is The Moonstone by Wilkie Collins, generally considered to be the first proper example of detective fiction in English literature. Considering Vicki’s penchant for Christie novels, it is surprising that it took her so long to decide on the genre for her own book, but not so incredible that it was, indeed, a murder mystery.

It took a while to get up the courage to start; it took even longer to truly get the hang of writing fiction after years of true-life travel writing and exacting advertising briefs. She decided to set her Christie-type novel with a modern twist in the famous Raffles Hotel in Singapore. The carefully preserved façade of the colonial-style building surrounded by an ultra-modern city perfectly reflected Vicki’s decision of a modern take on a classic genre.

Via a friend, she contacted an editor in London who could pilot her through her literary attempt. Vicki got over her dismay — sometimes perhaps her pique — as the editor dismembered the corpse of her early drafts and guided her to a clean and presentable manuscript to forward to a publisher. This elephant in the room is one everyone wants to acknowledge. It is painted on the mirror and based on a similar version Vicki and Roy saw at the Ritz in London, modeled on a painting by French art deco artist Jean Dunand. Incredibly, they found a local artist who had trained under the craftsman who painted the Ritz version.

She was intending to approach Penguin in London until her editor heard that the group had just opened a South-East Asian branch in Singapore. So off to Singapore went Vicki’s manuscript, The Raffles Affair. Of course, it couldn’t have been a better fit for Penguin’s new outpost.

“Don’t think,” says Vicki, “that I don’t realize how serendipitous this journey has been. The way some things have fallen into my lap, the chance meetings, the friends of friends. I have been very fortunate.”

Vicki belatedly wondered if it was okay to set a murder mystery in a real property, especially one as well-known and revered as Raffles. She fired off an email to the management. Of course, you may, was the reply, but do you think we could see the manuscript?

The hotel management couldn’t have been more delighted with the copy, not least because the property had just done a major refurbishment and was about to re-open. The Raffles Affair was perfect for the launch. The modern buildings of Auckland City peer into Vicki’s art deco-style home, a juxtaposition of old and new that appeals to her and is reflected in the setting of her book at Singapore’s Raffles Hotel. She and her partner Roy transformed the previously beige interior of their apartment (once a hotel suite) into a distinctive home that reflects all aspects of their combined personalities and likes.

Not only that, but the hotel had launched a writer-in-residence programme. It offered the first year-long residency to essayist and travel writer Pico Iyer and who better to extend the next ​place to than the author of a book set in its own confines? So far, Vicki’s residency has been conducted virtually but, pandemic permitting, she will be back at Raffles this year.

The refurbishment of the hotel meant Vicki had to make a few tweaks to the book. “If a copy had been purchased in Raffles Boutique and was being read by someone staying in the hotel, I wanted them to be able to look around and recognize where the action in the book was taking place,” she says.

“I had based the scenes on how I remembered Raffles, not necessarily how it was now.”

And that is how Victoria West, one-time MI6 operative and now spy-for-hire found herself untangling the threads of kidnap and murder at her best friend’s wedding at Raffles. And how, in real life, the head bartender of the hotel’s Writers Bar was tasked with handcrafting new cocktails called Femme Fatale, Agent Provocateur and Guilty Pleasure to celebrate the beautiful and fictitious Ms West’s success. 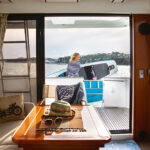 Living in an inner-city apartment means Vicki and Roy can lock up and leave, which they do almost every weekend, sailing off into the Hauraki Gulf on their launch, Moonstone. 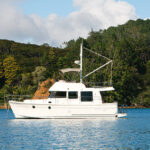 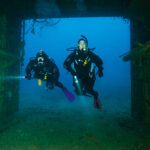 Both of them paddleboard and dive and are up for just about every new experience they can try.

So, what now for Vicki and Victoria? They are both in the writing nook of Vicki’s Auckland central city apartment — the one pounding her keyboard, the other taking shape on the page. They are inextricably intertwined; where one goes, so does the other. Vicki’s love of travel — her adventurous spirit — is the muse of her muse, in a way.

Everywhere she travels — every new experience she tries — will undoubtedly be the inspiration for the continuing adventures of the redoubtable Ms West.

Vicki begins her day by walking up 30 flights of stairs in her apartment building to ‘wake up’, before having breakfast and heading for her desk. As her editor and marketing advisor are in London, Vicki touches base with them before starting work. Then it’s onto the self-appointed goal of writing 1000 words a day, which is about as long as this article.

Usually, she writes 500-750 words because “if I try to write too many, then they end up being rubbish and I need to rewrite too much”, she says. “I’ve never actually had a problem with doing the writing — it’s just that I rewrite things a million times before I’m satisfied. Although I am starting to find now with book No.2, I am not doing that quite so much. I usually know what I want to say and the feeling I want to evoke but finding the right words sometimes takes a few attempts.

“The main thing I had to learn about writing a whodunnit is what information to hold back to keep the mystery intriguing. What I might have revealed on page 10, for example, might have ended up being revealed on page 100. And I had to add in huge chunks to show more of the relationship and tension between the characters. The first 70 pages of The Raffles Affair weren’t even in the first draft.”

The Raffles Affair was published in April in Singapore, with it’s New Zealand release scheduled for 31 August. It is currently available for pre-order. vickivirtue.com