A secondary school art teacher scolded his students for being “plum puddings” and told them to get on with their art. One of them took this admonition to heart, his words inspiring her since.

“We were 15-year-old  procrastinators just sitting there when the teacher’s words rang out in his rich Glaswegian accent,” says Ōākura-based artist Caz Novak. “He told us not to be plum puddings.” It was perhaps the best advice she has received in what is now a two-decade-plus career as a painter. “Art-making requires action, experimentation, problem-solving and a good dose of self-belief.”

The words of her Wellington High School art teacher Robert McLeod (himself a renowned artist) came back to Caz at a time when she needed such encouragement. She had trained as a teacher, taught at West End Primary School in New Plymouth and had two babies. She was recovering from postnatal depression after her second daughter’s birth, sitting in a clinic filling in a registration form, and wondering what to write in the space for “occupation”.

“I boldly wrote ‘artist’, and was immediately quizzed by the doctor, ‘So, you’re an artist, what do you do?’ ‘I paint,’ was my answer and I thought, ‘Well, I’d better make that happen and not be a plum pudding about it.’” 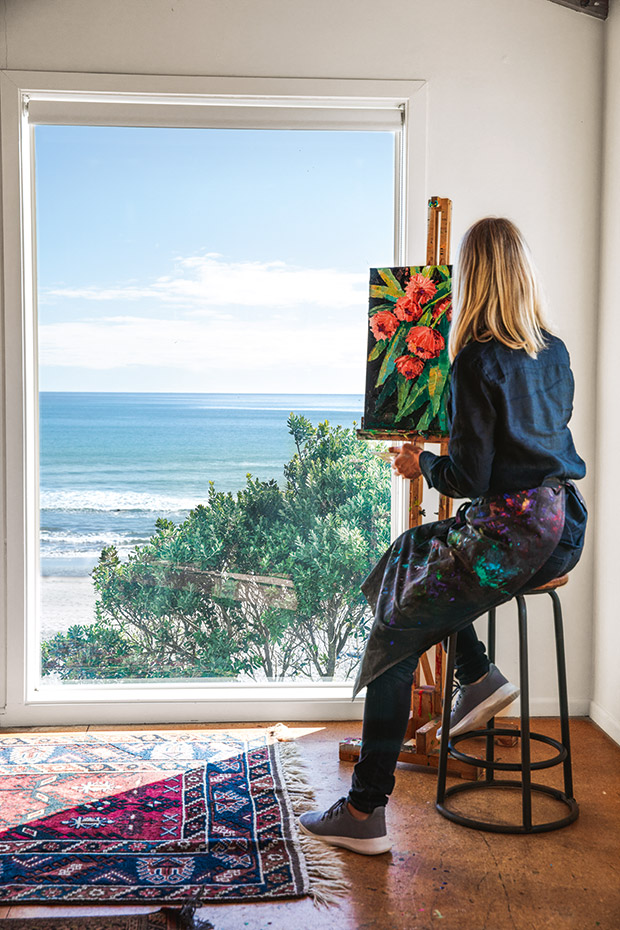 Caz’s light-filled studio, with views that inspired her coastal Pacifica series, is currently populated with works from the Opulence series. “Working within a series allows me to explore an idea and develop it. I love that each new painting draws on a previous one, creating a continuum.”

The depression she experienced after the birth of her eagerly anticipated baby, Milla, took glass-half-full Caz by surprise. In working through the illness, she turned again to the art she had loved as a teen, and had majored in during her teaching diploma. Colour was calming, helping her recover and slowly restore her self-confidence.

“My experience of postnatal depression was of a colourless world. All my senses were dulled – except sound, which became amplified with the smallest noise able to startle me.” As colour began to excite Caz once more, she knew she was getting better. “By picking up a paintbrush, I was able to reconnect to that joy. To me, colour is visceral, it speaks to the subconscious.” When she began having brilliantly coloured dreams of the paintings she was working on, and woke with a sense of purpose instead of a churning stomach, Caz felt her self-confidence return.

She and husband Steve, an accountant, accepted the experience as a catalyst for her to become a full-time artist. “Steve, who works from home and is self-employed, helped me find painting time each day by juggling the parenting responsibilities. It often meant he cooked dinner or put the kids to bed while I disappeared upstairs to paint.”

More stories you might like:
The many nights (and years) it took Kaikōura sculptor Ben Foster to restore this 1961 Volkswagen Karmann Ghia

Initially, Caz’s work was in the contemporary realism style, but over the decades, it has evolved into a more abstract approach with the process itself sometimes leading the way. “Being an artist is an ongoing learning experience, and this is especially true of the wet-on-wet [alla prima] method I use. 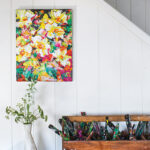 Saturated colour and textured impasto paint are hallmarks of Caz Novak’s work. She has a preference for palette knives over brushes and enjoys sculpting large volumes of paint. 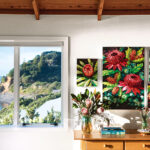 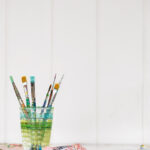 “The process of laying down colours next to each other is transformative. A shade on its own can be strong and powerful or subdued and receding. Then you place it alongside another colour, and it becomes something else, changing its entity.new zeal

“I never know entirely what is going to happen as the work can take on a life of its own. There are some paintings you control and some you don’t. And it is good that you don’t control everything because working wet-on-wet leads to wonderful results that could not be achieved with a plan. “Even when a work is sketched out, it can’t be confined by an idea. I’m not working in layers, allowing one to dry and building on it, I am allowing wet paint to interact with the next layer. I might use a palette knife to draw one shade through another to create a new colour, but it is not perfectly mixed. It mixes on the canvas, which brings spontaneity to the colours of the thick paint.

“Impasto is a less exacting way of painting, with a dynamism that requires me to be bold.” It also requires her not to be that plum pudding her teacher warned about, and to get on and take risks. “If everything turns to custard, I could scrape off the paint, but that doesn’t happen a lot. Paint interaction is where the magic happens. I pull, drag, and push the paint around and enjoy that spontaneity.” “Ōākura River is a cherished community taonga; our children learnt to swim there, and during summer, it’s the perfect place for families to gather.”

Many of Caz’s works are painted to commission. “I have to explain that there is a caveat; that the painting will dictate to some extent what it is going to be. Yes, I might start with a sketch of what we’ve talked about. It will be a starting point, an anchor for my thoughts. But if I were to take a photo of that starting sketch, the completed work will have developed in some way. So far, I haven’t had a commission where the buyer hasn’t loved their painting.”

When Caz started painting her way out of postnatal depression, she realized that if she marketed her work through the internet, she could establish relationships with her clients. It was important, considering the relative isolation she felt as an artist working from her home studio in Taranaki.

“I embraced it, launched my website and promoted and sold my work that way. One gallery owner told me at the time that no one would buy art over the internet. But for the past 20-plus years, I have been doing exactly that.” 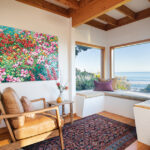 Inspired by a stay in Granada, Alhambra Gardens keeps travel memories alive. “Sometimes, just capturing the colour of a flower in a painting can transport you back to a special time or place. When traveling, I gather inspiration on my phone for future work. At home, my box of oil pastels provides a hands-on way to explore ideas” 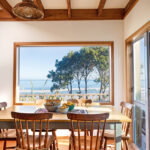 The pōhutukawa that frames the view from the dining table is a favourite with native birds and the perfect flowering Christmas tree each year. 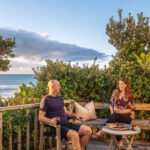 Steve, Caz’s husband, and their daughter, Milla (who took the photographs for this feature), enjoy a “golden hour” drink on the deck. 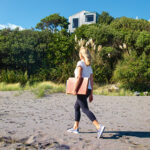 And not only to New Zealand buyers – Caz’s work has left these shores for nine other countries so far. “I’ve had to be both artist and businesswoman. It’s a juggling act – painting the work, marketing it, packing up crates and shipping them.

“I discovered early on that launching a website is one thing but getting visitors to see the work and selling it is a whole different mission that required a strategy. For me, this always included advertising in beautiful publications, and I have been advertising in NZ Life & Leisure since the very first issue. I also connected with art buyers through my mailing list, which allowed my newly painted works to be viewed and sold while they were still drying on the studio wall.”

This has worked very well with a growing number of loyal Caz Novak collectors. One client, a university professor, now owns 10 of Caz’s paintings (more than Caz does) and – apparently – still has room for one more. 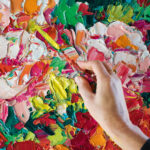 The Opulence series is Caz’s most popular to date. 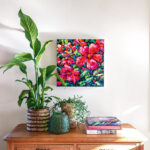 “Bringing flowers into your home is uplifting, whether fresh and in a vase or painted as loose, expressive blooms on canvas — they bring colour and joy.” 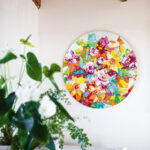 Caz’s latest collection of works relates to the challenges of climate change and is called Gondwana. Her research into the way plants and trees survive bushfires was stimulated last summer by the experiences of her eldest daughter Tess, who is based in Sydney. Caz began to think about the power of nature to restore and regenerate without the necessary leaves for photosynthesis.

When she discovered many of these plants belong to the proteaceae family, one of the oldest groups of flowering plants, which dispersed and diversified throughout Gondwana before the breakup of the vast southern supercontinent, she realized this family of plants has cousins scattered around the world. 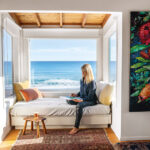 The daybed in Caz’s studio does double-duty when family members return home to holiday over summer. “It’s not exactly drawing the short straw if you’re last to arrive and get the studio bed. It’s a bit like sleeping on a ship” 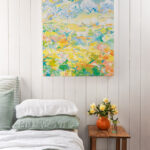 “Steve purchased the original bach more than 30 years ago, and although we’ve added rooms as babies arrived, it’s still small in scale, a little quirky, and we love it.”  In the bedroom hangs Evoke an expressive landscape painting. 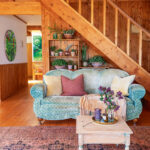 The family’s 1930s sofa has been recovered in velvet, while the wooden shelf behind is transforming into what Caz calls the “plant library”. 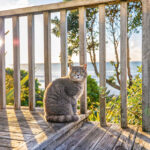 Although not a lap-cat, british short hair Minnie is a regular studio companion.

More stories you might like:
How young creative Sam Mathers flipped his graphic design career to pursue art full time

“In Aotearoa we have the rewa-rewa (new zealand honeysuckle), Australia has the waratah and South Africa the protea. By representing this botanical family united in one bouquet, they become a symbol of hope set against the charred background of the bushfires. “In the same way, I think the challenges of climate change will require humanity to unite and adapt; embracing both indigenous wisdom and science to navigate the future.”

A large painting from this series is currently on display alongside works by other established and emerging Taranaki artists at an exhibition called Home Work at Puke Ariki Museum in New Plymouth. The exhibition theme is Tuku Iho, which looks at raising awareness of traditions that are passed down through generations.

Children’s colouring-in books were popular in the 1970s, and learning to colour within the lines, although more a fine-motor skill than artistic expression, counted as art in many primary schools at the time. “As it turned out, I was pretty good at it,” says Caz. “I enjoyed the process of laying down colours and managed to win prizes in many of the competitions I entered. (Entries were cut out from the children’s section of the Sunday newspaper, or picked up from the grocery store.) “It was not until my high-school years that an understanding of what art actually was occurred under the tutelage of contemporary artist and educator Robert McLeod. In his classes, the only lines were those we created, and we were encouraged to experiment with materials and ideas while discussing the works of artists from Picasso to Pollock. During this time, I also began attending evening life-drawing classes at the Wellington Arts Centre [held then at the historic Dransfield House on Willis Street].

“As a 15-year-old, I was in awe of the confidence of the female models as they posed next to a tiny bar heater on wintry Wellington nights. I do remember one memorable session when, due to a no-show from the model, one of the music students who was facilitating the session stood in as a replacement. He was our first and only male model and chose to pose with his violin strategically positioned. I remember his embarrassed pink cheeks were matched by mine. I knew I should be looking and drawing, but it all felt too uncomfortable. I went on to paint female nudes in loose painterly pastel tones for my School Certificate exam — and there wasn’t a male or violin to be seen.” caznovak.co.nz