How New Zealanders can build smarter and more efficient homes

A smart house isn’t filled with fancy electronic gadgets. It’s a design concept that keeps you warm and can save you money during building and after. But most NZ homeowners are missing out.

But what frustrates Christchurch architectural designer Warren Clarke, and many other smart home proponents is that the way we build houses hasn’t changed in that time. 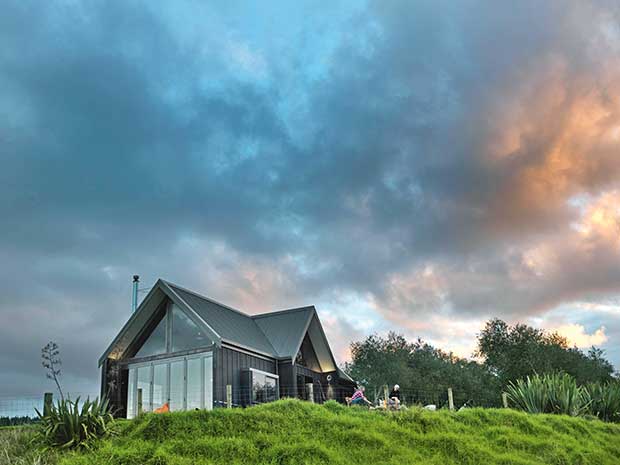 A home built from structurally insulated panels (SIPs), a newer, cost-effective building product. It is strong, allowing it to form part of the structure of the building, and has a core of insulating foam which gives it a high energy-efficiency rating.

“The Building Code hasn’t really progressed in 100 years, apart from adding insulation in the 1970s. Our houses are still timber tents.”

“We have a worse building code than Australia. It’s absolutely frightening how poorly-built our houses need to be.” An insulated concrete floor will absorb heat during the day, helping to keep a home warm, but can also be designed to act like a ‘raft’, absorbing vibrations during an earthquake.

“The New Zealand building code is set as the standard for new homes,” says Nelson. “So people think ‘oh, it’s built to code’, but all it means is it’s the crappiest house you can build without it being against the law.”

Many companies were quick to cotton on, says Warren Clarke.

“The problem we have is developers build these subdivisions and they put covenants and restrictions on them, that the home has to be of a certain size. So somebody buys land and the first thing they think is ‘ok, I have to build a 200m² home.’ That’s why we get locked into square metre rates and it’s a downhill spiral from there.” 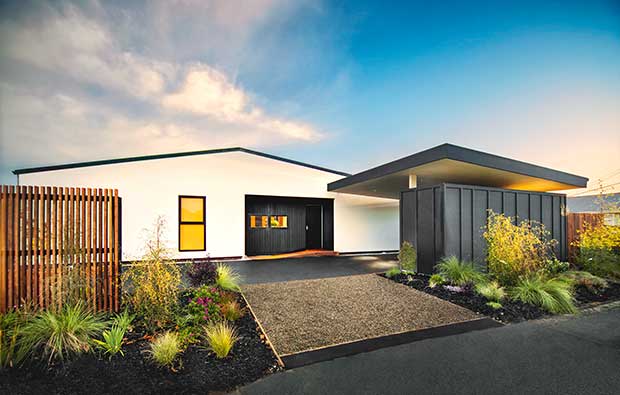 Architectural designer Warren Clarke’s home is just 140m², but is a spacious four-bedroom home. It was designed and built to world-class standards to show his clients how a smaller, well-designed home can be far more cost-effective without giving up the feeling of space.

Many of NZ’s biggest councils now have Eco Design Advisors. However, Nelson says they can struggle to get people’s attention.

In his role, he often sees the effects of poorly-designed homes.

“I’ve had clients with a brand new, 2017, half-million-dollar home with mould on their curtains, condensation all over their windows, mould in the en suite. They thought they had defective windows.”

The window manufacturer told them there was nothing wrong with the windows – they just needed to open them more often. That’s the wrong answer, says Nelson.

“The reason is because bog-standard houses being built today are pretty airtight, and they put in very wimpy extractor fans in bathrooms. If the only solution is to open the windows and let the warm, moist air out and let cold air in, it’s not a 21st-century solution, it’s not a developed country solution.”

Warren Clarke became so frustrated trying to convince clients that smaller, smarter, energy-efficient homes were better that he built one himself. His four-bedroom home is built to world-class standards. It’s just 140m² but feels much bigger. 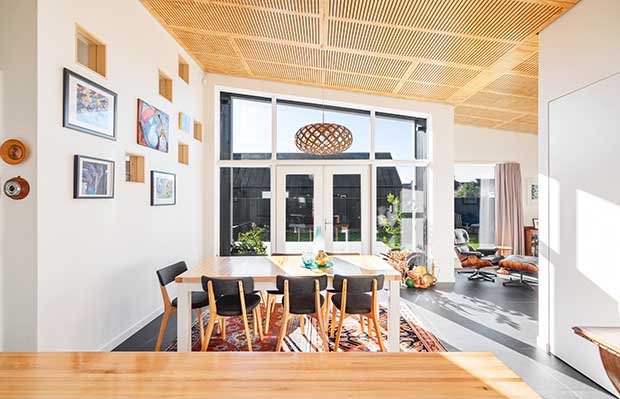 “Building my house was inspired by the pushback from clients saying, ‘what’s it going to cost?’ I thought, ‘I’m going to build a house, we’re going to live in it for 3-5 years and we’re going to find out once and for all what’s worth it and what’s not.’

“Somebody asked me if I could do it again, what would I change? I’d make it smaller. I reckon I could take 10-15m² out of it and it would still be amazing.”

WHAT MAKES A HOUSE SMART? 1. Small
A smaller home costs less to build, heat, and maintain. A well-designed small home will feel much bigger than its square metre calculation. Warren Clarke says people usually have no idea how big his 140m² home is and comment on its spaciousness.

2. Efficient
It will have a high level of energy efficiency. A heavily-insulated thermal envelope means walls, floors and ceilings keep the house warm in winter and cool in summer and can halve power bills.

3. Healthy
A smart home will be almost airtight. This requires it to have special ventilation systems that remove stale air and bring in fresh air to prevent condensation and mould build-up. These systems also transfer warmth so very little heat is lost.

HOW TO DESIGN A SMART HOUSE USING THE 15-15 RULE

The most economical way to create a smarter home is to make two simple changes during the design phase, says Nelson Lebo.

“Homes right now are being built too big and with too much glazing. They’re expensive to build and expensive to heat. I start with something super simple, the 15-15 rule.”

A good architect can do this, and you won’t notice, says Nelson. Warren Clarke agrees. “The number of people I talk to who say, ‘I need a separate laundry’. I ask how often they do laundry and they say, ‘only on Saturday’.

“But they want to dedicate a room, 10m², to an occupation that happens once a week. Our laundry is in a cupboard in the hall.”

In 2016, the average expected cost to build a home was $1906 per square metre; by 2021, it was $2500. However, that figure doesn’t consider other building work on a property, such as driveways and drainage. It also doesn’t take into account other expenses that can’t be calculated by StatsNZ, so it’s likely the per square metre price is actually much higher than this.

2. Reduce your overall glazing by 15 percent

You could save a lot of money following the 15-15 rules, says Nelson, but a better long-term idea would be to re-invest those savings into designing and building a smarter home. “You could take that $50,000 in savings and plough it into high-performance windows and doors, a super-insulated ceiling, slab edge insulation, and a balanced pressure ventilation system.

R-values are a measure of heat loss from ceilings, walls and floors. NZ has R-values 50 percent worse than many countries.
Source: NZ Green Building Council

Put more windows on the north side of your house and fewer on the south.

“When you reduce 15 percent of the glazing, most can be removed from the south and the west. West-facing glazing tends to overheat homes in summer, and south-facing glazing makes homes cold all through winter,” says eco design advisor Nelson Lebo. HOW TO BUILD SMARTER

Talk to an Eco Design Advisor: Auckland, Hamilton, Palmerston North, Hutt City, Nelson, Christchurch and Dunedin councils all offer a free Eco Design Advisor service. It’s available to anyone building a new house or doing up an old one.

FIND OUT ABOUT HOMESTAR

Find out about Superhomes: The Superhome Movement is a non-profit, industry-led group that wants to raise design and building standards.

Find out about Warren: architectural designer Warren Clarke assisted us with this story. He designs and creates homes that have low energy running costs, and has designed and built his own Homestar 10 home.