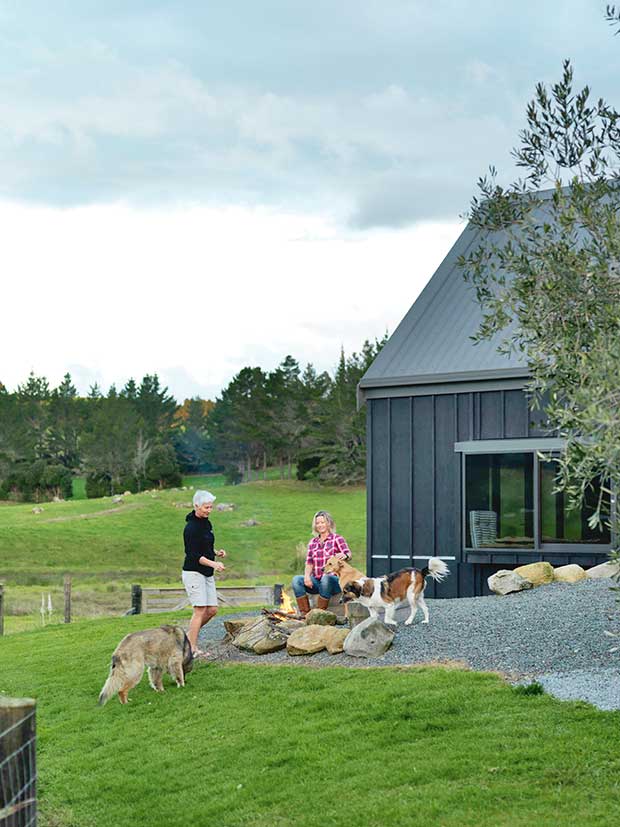 A small house in an olive grove is the smart home of Brooke and Maggie Noonan’s dreams.

Brooke Noonan thinks we can learn a lot from animals. In her 22-years at Auckland Zoo, Brooke started as a handler for Kashin the elephant and worked her way up to be the curator of mammals, big and small.

“Elephants are content knowing they are in a secure environment and knowing that they are going to be loved. They are no different to other animals in that respect,” says Brooke. But while she and the other zoo staff put a lot of care into creating a safe enclosure for the animals, her own home wasn’t providing the right environment for her and her wife Maggie. The couple spent five years restoring a 100-year-old kauri villa called the Stationmaster’s Cottage, 60km north of Auckland. They loved it but there was an elephant in the room: it was too big.  They were also tiring of the hours they spent commuting to Auckland. 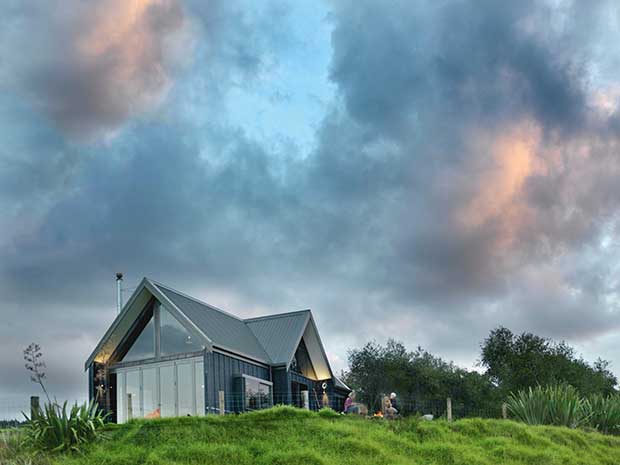 Maggie and Brooke with their dogs in front of their SIPs home.

They began a search for a lifestyle block where they could build a smaller, smart, energy-efficient home and a stand-alone guest cottage. It took several years, but eventually they found a property that met their criteria. It was an olive grove in Mangonui. They handed in their resignations and called SIPs-specialist architectural designer Tonia Williams, of Oarsom Creative Ltd, to begin planning their dream home.

SIPs or structural insulated panels (sometimes called smart panels) are prefabricated, composite panels. An insulating foam core is sandwiched between two structural boards. The system is like a flat-pack for houses and has been popular in Europe for many years, but is relatively new to New Zealand. 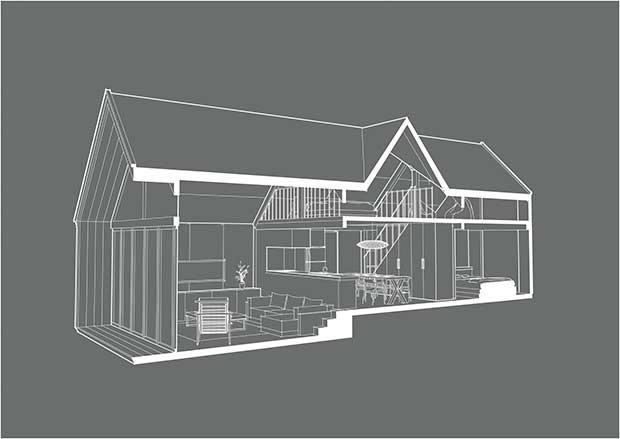 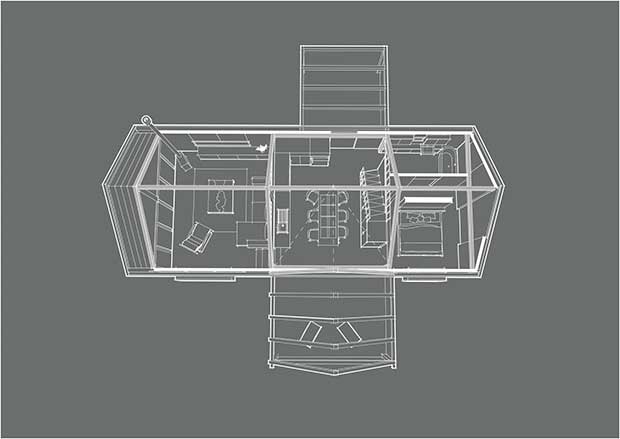 Maggie and Brooke wanted a home with an efficient, compact design that wouldn’t cost the earth, ideally $2000-$3000 per square metre. They were inspired to build with SIPs (structural insulated panels) after watching an episode of Grand Designs UK. “We knew we didn’t want to build a traditional home, made of sticks and fluff,” says Maggie. “We wanted a material that would make a warm, dry home and create less waste for landfill. SIPs ticked all the boxes.” 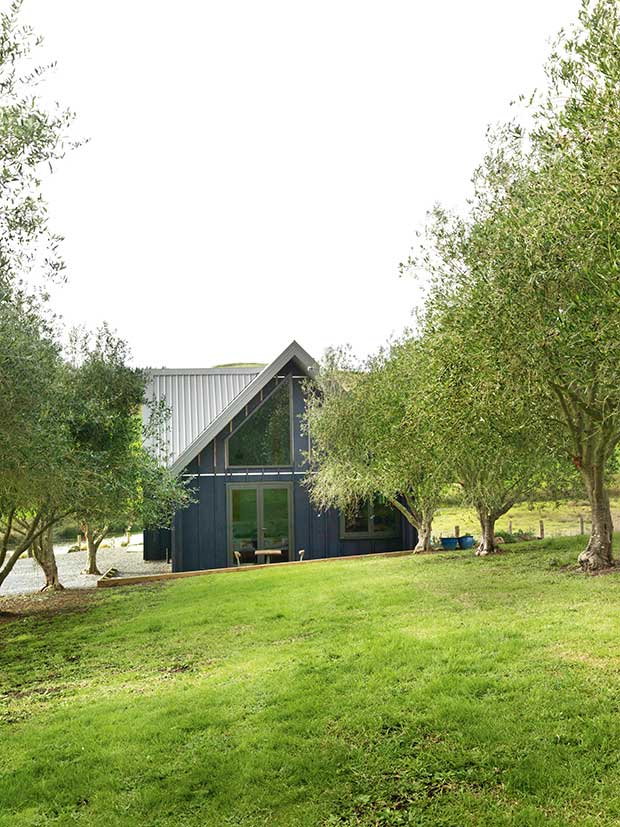 Their two-bedroom home sits in a private spot, backing onto the established olive grove.

The advantages of SIPs

SIPs have high insulation values and create airtight environments. They provide a rigid air barrier on the inside and outside, meaning moisture-laden air can’t get inside the structure. The manufactured panels are different from traditional timber framing which Tonia calls “the unacceptable solution”. “With the traditional way of building houses, there’s a timber frame wrapped in something that’s no thicker than tissue paper,” says Tonia.

“The role of that paper is to be the second line of defence behind the cladding to catch any water drips.  “The Building Code is focused on moisture coming in from the outside, but is not addressing wet air on the inside of the building. As humans, we create a lot of moisture when we cook, launder and shower. When you have warm air on the inside next to a porous structure, what you can end up with is condensation inside of the framing, which leads to rot.” 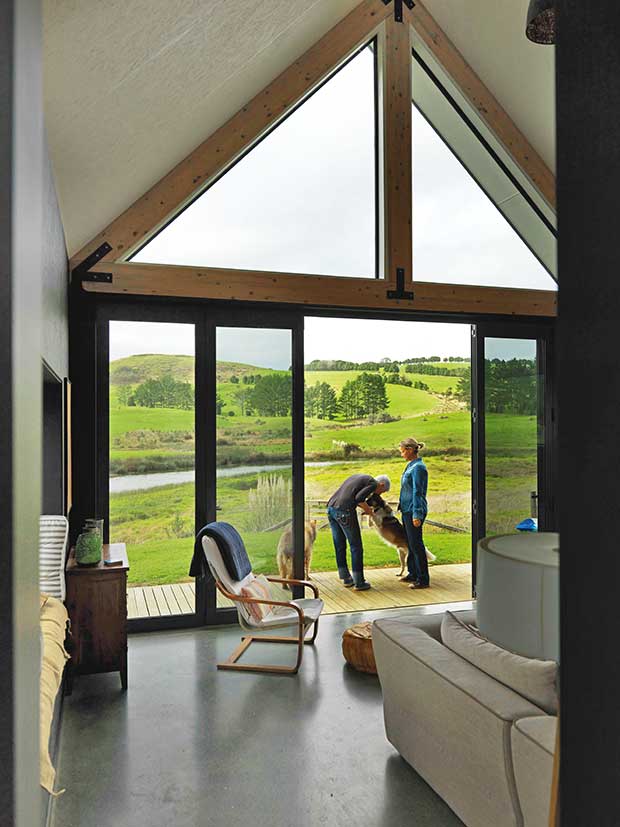 The prefabricated panels have the same structural principles as an I-beam (a load-bearing beam shaped like the letter I). This strength creates more design opportunities for architects as the panels perform several functions simultaneously: structure, insulation, bracing and a rigid air barrier. SIPs are strong under a load and in earthquakes, and lightweight compared to timber framing. The insulating qualities of SIPs means architects can design homes with bedrooms on the colder sides of the house without the risk of dampness. “We can design layouts that harness the sun’s energy to heat houses passively in the winter and keep them cool in hotter months,” says Tonia. 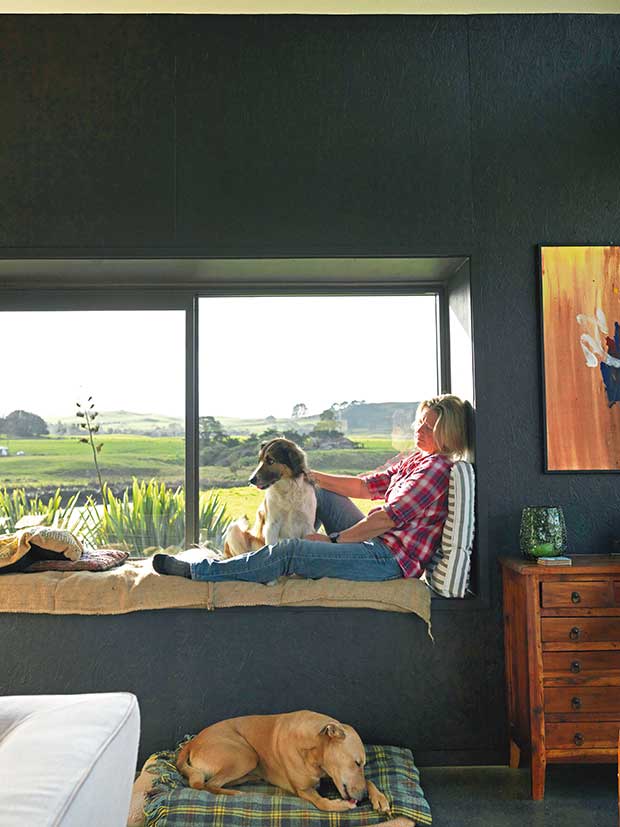 The house design is passive solar, helping to keep it warm in winter, and cool in summer.

The panels are pre-engineered and precision-cut in factories to the dimensions specific to each build, to the millimetre. This accuracy can save building hours, and eliminates the need to trim and straighten timber. It also removes the time-wastage and cost of human error, says Tonia. “The way I see it, every time you cut a piece of timber, and you have intersections with nails and fixings, there is room for mistakes. SIPs reduce that risk.” Another advantage is it’s possible to paint panels before assembling the house. Maggie and Brooke saved hours of time by painting their roof before it was hoisted into place. 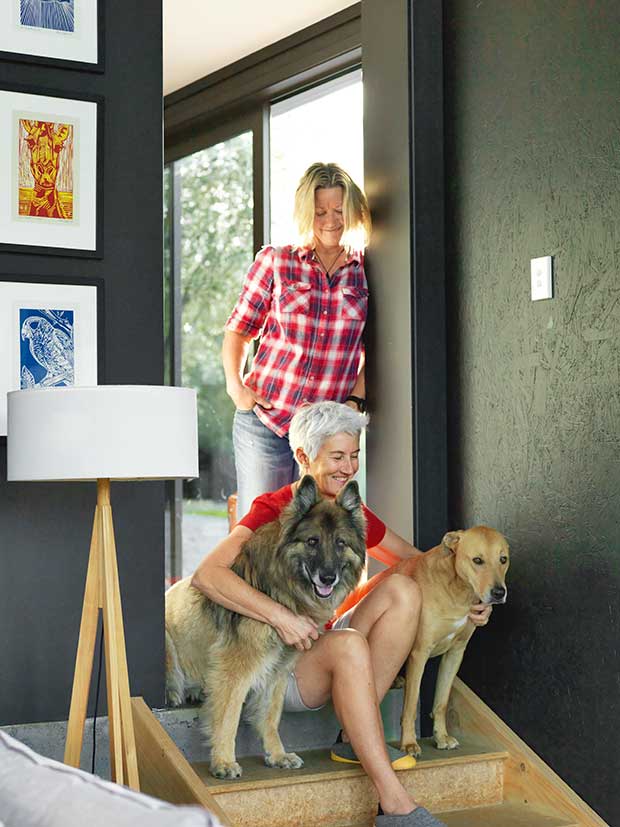 Maggie and Brooke’s home is 95m² of living space, around half the NZ average (182m²), including two bedrooms and a mezzanine floor. They found design ideas on Pinterest and shared these with Tonia.  The couple were on a tight budget, so Tonia’s ‘site visits’ were by email and phone. They discussed the lay of the land to make sure the house was in the best position for sunlight. Tonia placed it away from the small glamping cottage at the end of the olive grove, called The River Bothy, to ensure the couple’s privacy. “Tonia was great, we exchanged so many emails and phone calls, and she was so patient with us,” says Brooke. “I don’t think we understood how long the planning side of it would take, and it’s tough to get your head around a mezzanine layout on a plan.” The structural insulated panels form the exterior and interior of their home. They can be painted (far left) or left unpainted.

The roof of the house has a 45-degree pitch. Due to the structural integrity of the SIPs, there are fewer support trusses than if the home had been built using traditional methods. The effect is the roof appears to defy the laws of physics. “The gestalt nature of SIPs (where the whole is something more than the sum of its parts) results from the high-pressure lamination between the outer skin of SIPs and the core material,” says Tonia. The home is very open, but its high level of insulation keeps the temperature comfortable.

“This bond creates a flat panel that behaves like an I-beam. It can span several directions without the need for additional structure.” A SIPs house can be built quickly but they usually have long lead-in times, says Tonia. Detailed design decisions must be made at the start of the project for precise panel manufacturing. Sometimes components must be shipped from the origin of manufacture to a local port/site. 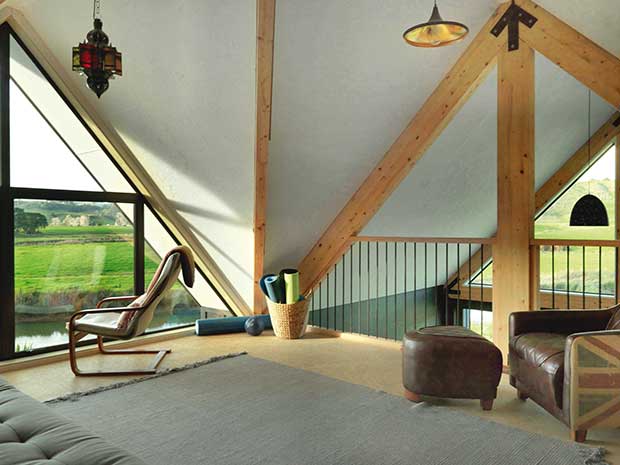 The roof is at a 45-degree pitch, but thanks to SIPs, needs only a few support trusses.

Maggie and Brooke moved to the Far North in November 2016 and lived in a caravan. Their house was the first built using SIPs north of Auckland. Tonia arranged for SIPs supplier Formance to send an expert to help guide the local builders. Maggie and Brooke helped their builders as much as they could with simple jobs like gluing and painting. 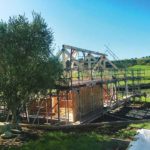 The outer layers are structural, helping to hold up and brace the house. 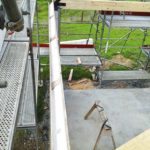 Looking down on the inside of a structural insulated panel. The white foam insulation forms the core. 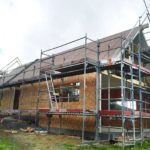 But the project still went $50,000 over budget. Building took a month longer than expected, and there were extra costs for plan changes and engineering of the roof. “We could never have dreamed how great our lives would be after moving to Northland and we’re closer than we’ve ever been as a couple,” says Maggie. “But I’m not going to lie, the build was really stressful. We had a great architect and building team, but our timelines and budgets still blew out, and all our savings went into finishing the build. It’s horrible when you are in the middle of a half-built house and it feels like there’s no end in sight. But a year later we can see the hard slog was totally worth it.”

“We know we’re pioneers using this building system in New Zealand, so the overspend is understandable, and we’re incredibly proud of our home. “A lot of people come up here especially to see what a SIPs house looks like. We encourage them to come inside to experience what it feels like too.”

TURN ON THE SUN Brooke and Maggie’s house is powered by 12 solar panels (2m x 1m, 3kw). Local engineer Nick Whittles designed the system to divert excess energy to heat a 320-litre hot water system. The system cost $35,000; it would have cost a similar amount for cables to be laid for the property to go on the grid. 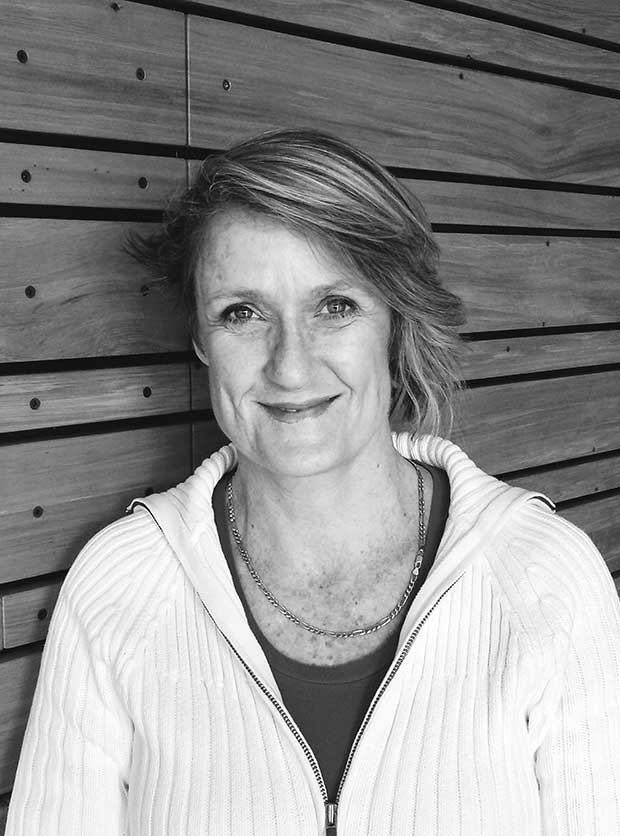 Tonia Williams is a former world champion lightweight rower. She says her sporting background helps her as an architect.

“I know some builders take shortcuts with construction, but in sport, there are no shortcuts. You have to put in the training hours. If there are shortcuts, it’s usually called cheating.” After hanging up her oars from international competition in 1996, she spent several years working as an architect in the UK. She returned to NZ in the middle of the leaky house crisis and vowed she would not design with timber framing. The couple encourage people to check out what a SIPs house looks and feels like.

Her first SIPs house design was her own Auckland home. It helped her understand how certain design decisions can add to the cost of a build. She says there is a shortage of builders who are familiar with SIPs, and the industry doesn’t encourage new construction methods. The building materials supply chain is controlled by big companies with a vested interest in retaining the status quo. SIPs are considered “disruptive”.

“SIPs are pretty intuitive to use, but there is a learning curve.” There are several SIPs suppliers in New Zealand, and some offer training courses for builders. Pamela Bell is another SIPs fan. She is the CEO of non-profit organisation PrefabNZ. She is also a former professional athlete who represented NZ at the 1998 Nagano Winter Olympic Games in the giant slalom snowboarding.

She says SIPs are gaining in popularity, particularly in colder regions such as Christchurch and Central Otago. “A SIPs house which is under construction and isn’t even closed-in, is noticeably warmer than the outside environment.” There used to be a stigma associated with prefabricated design. That was partly thanks to cold, prefab buildings in schools, but she says New Zealanders are becoming more open to the method.

Prefabs come in many forms: SIPs; three-dimensional volumes/modules; a hybrid of several systems; or complete prefab buildings (transportable box design). “There are huge advantages to all forms of prefabricated design,” says Pamela. “Increased quality, reduced time, improved sustainability, reduced disruption at the building site, and a healthier, cleaner, safer site. “The main customer benefits are reduced construction time and ‘known’ costs.” PrefabNZ has ambitious goals, wanting to greatly increase the number of homes built using prefabricated design by 2020. The Ministry of Business, Innovation and Employment is currently assessing the skills shortage in the prefab construction industry.

To get a list of New Zealand SIPs suppliers and manufacturers, and to find architects using SIPs, visit: www.prefabnz.com – search for ‘SIP’ or ‘panel’.