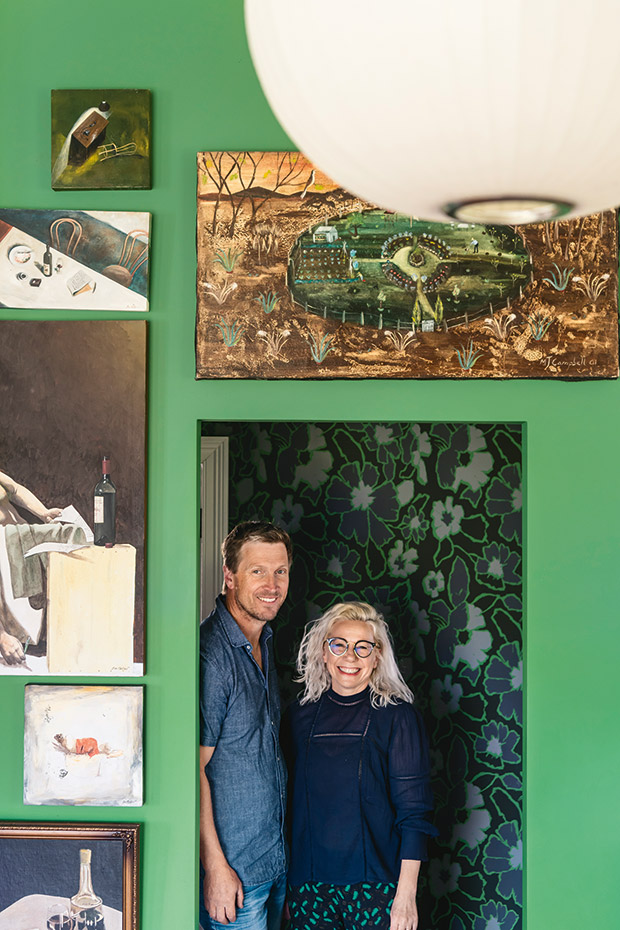 Ben and Helen happily admit to owning an eclectic collection of artwork. The wallpaper behind them is Mason Mayfair, one of the classic designs they recreated for Resene.

When a Martinborough artist and winemaker couldn’t find quirky New Zealand-produced wallpaper for their new home, they decided to take DIY to the next level.

Redecorating often begins with stripping walls. In older homes, this means forgotten-but-still-vibrant wallpaper patterns from previous decades can unexpectedly reappear like torn-edged glimpses into a mysterious past, a time before boldness of expression faded beneath layers of flat colour.

When Martinborough artist and interior designer Ben Masters and his winemaker wife Helen renovated their home in 2007, they decided to give their walls personality rather than a coat of paint, and looked to patterns.

“That’s when we realized that all the interesting wallpapers were imported and expensive,” says Ben. “More interesting handmade papers were made in New Zealand back in the 1960s and 1970s yet no one was doing that here then. But wallpaper, in general, was making a comeback, and we both decided that we could make our own.” 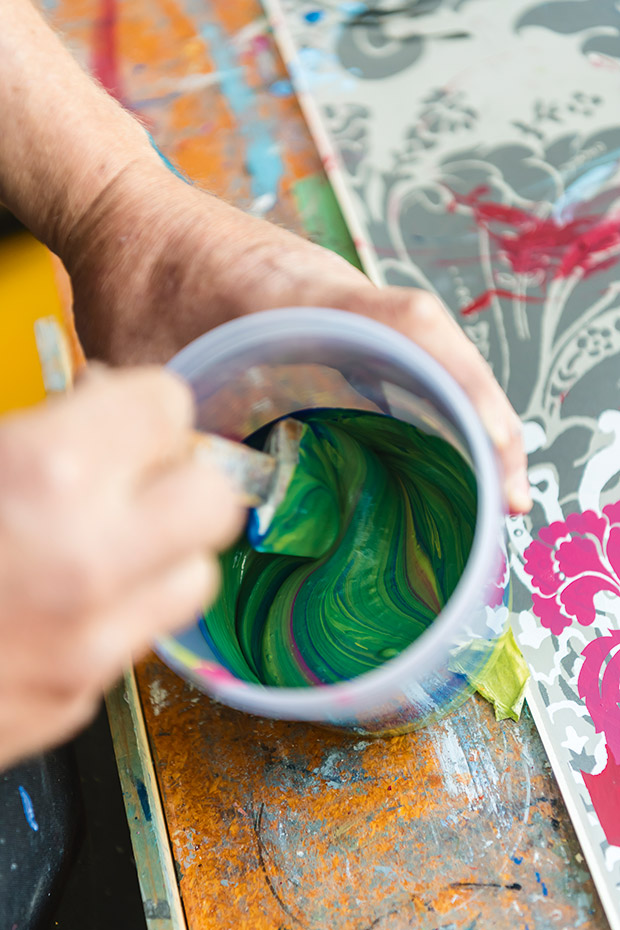 Helen takes up the story: “As a child I hated patterns, but I became interested in textures and patterns and depth as I grew older. Some of those old wallpapers are full of personality, and that’s what I loved about them. So, we did a screen-printing weekend course in Wellington, and then visited the Florence Broadhurst [pioneering wallpaper and fabrics designer] factory in Sydney, and saw how hands-on they were. It then took us a year or so to work out how to do it ourselves.”

PaperHands Print Workshop was born, and the couple’s eclectic taste and talent quickly led to some distinctive and quirky designs. Ben felt there was little point producing traditional patterns as that market was already well covered. 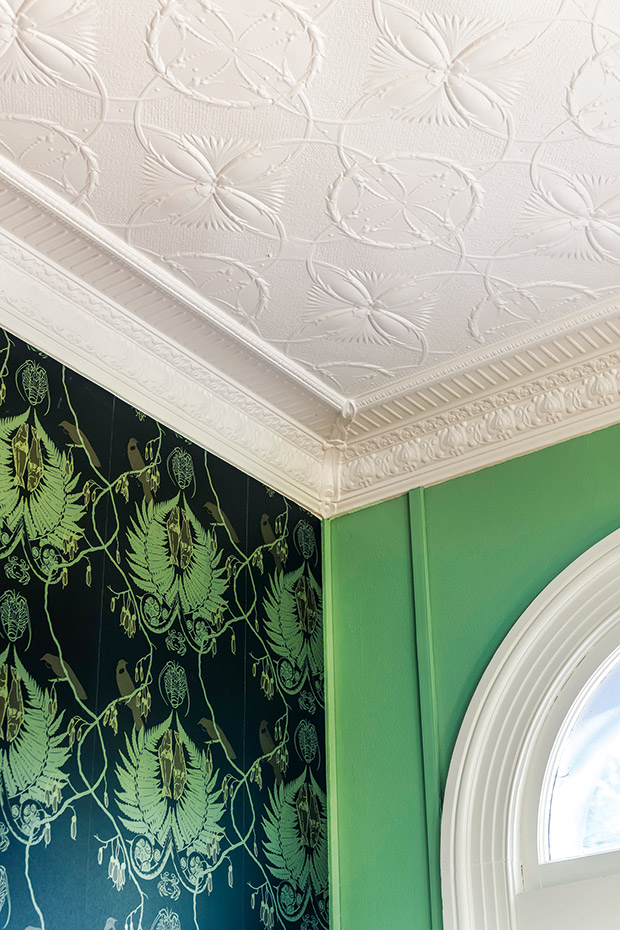 This wallpaper is called Native and also features on the walls of the Martinborough Wine Bank.

“We decided that we should just do what we liked and hope that other people would like it as well. Silkscreening allows us to do repeats that are bigger and bolder, and everything is drawn and created by hand, more like a piece of art than a pattern.”

Ben has rendered native ferns, flaxes and tree forms into beautiful repeating motifs, and some of his still-life drawings of female models were stylized to become the striking Ladies pattern. An innocent-looking botanical theme is revealed on closer inspection to depict the natural sources of beer, gin, coffee and other indulgences, hence its name, Vices. Helen believes a home should be an expression of the people who live there.

“We were trying not to make typical wallpaper, but something with another layer to it, a bit cheeky with of a sense of humour,” adds Helen. “Generally, I’m the ideas girl, and then leave it to Ben to work out how to do it.”

This included finding a space in Martinborough big enough for the long tables required for the rolls of paper and screens for printing. A good relationship with a Porirua wall-covering manufacturer gave Ben access to equipment and advice. 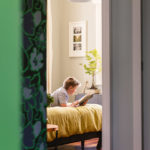 Harvey already has aspirations towards winemaking, like his mother. 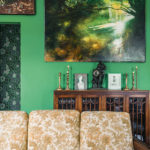 Helen and Ben both enjoy filling their home with furniture that has craftsmanship and a history. 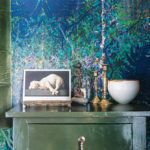 Ben and Helen’s far-reaching love of art extends to this print of Spanish Baroque artist Francisco de Zurbarán’s oil painting Agnus Dei, (The Lamb of God). Also on the bedside table are two original bronzes by Ben’s mother, artist Wendy Masters. One is of Ben reading to his son Harvey, the other is of his daughter Stella dancing.

He also looked to the past for inspiration. It came in the form of an invaluable book about a pioneering wallpaper designer who also happened to be based in the Wairarapa. William Mason designed highly individualistic wallpapers in the late 1960s and early 1970s that revolutionized inner-city interior design and even adorned New Zealand embassies.

Mason Handprints was sold to Resene in 1974, but many decades later was about to form part of another surprising repeat pattern. After Ben and Helen had drawn initial inspiration from these classic designs, Resene contacted PaperHands in 2016 to help revive Mason Handprints. 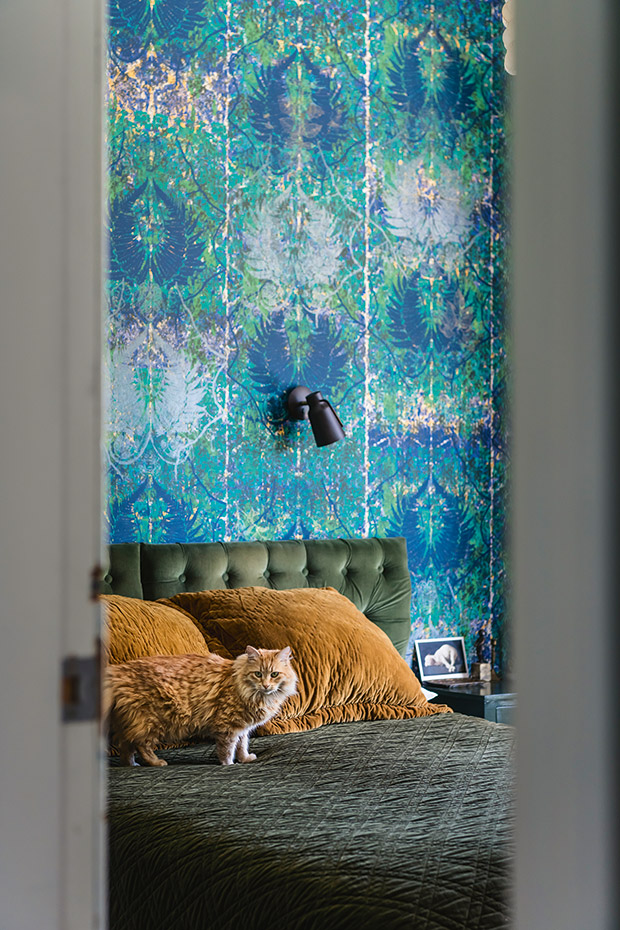 Ben overlaid designs to create this one-off striking wallpaper for the couple’s bedroom.

“It meant we were reproducing wallpapers from the 1960s and 1970s with new colourways. And some of those patterns are timeless — and deserve to be seen again.”

A move to a larger rural property allowed Ben and Helen also to expand PaperHand’s base. Ben admits that the space they had hired in Martinborough was somewhat lacking in looks and earthquake-proofing. He was considering building a studio on their property when Helen found the ideal building available for relocation on Trade Me. 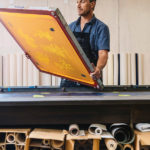 Ben examines a silkscreen frame before printing a roll of paper. 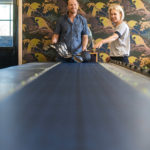 Ben and his assistant Penny Kirkup in the studio. The new Kakapo design is in the background. 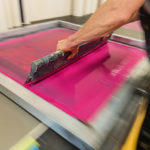 Traditional techniques are fundamental to the PaperHands ethos. 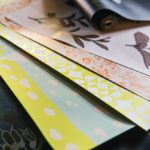 The many patterns have been designed by Ben and Helen, and given even more variety with different colour applications. 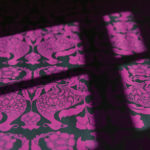 One of the original Mason Hand Print designs, which PaperHands recreated for Resene.

The former workshop was transported from Hawke’s Bay last year and now looks as if it has always belonged here. Ben’s experience in retail design gives him an architect’s eye for detail. “It has a distinctive Hawke’s Bay weatherboard profile, which is very similar to our house. So, once you add a coat of paint, it all fits.”

The building incorporates a small showroom and the couple also plans to open the studio to visitors where they will be able to see Ben and his assistant Penny Kirkup revive an art long thought to have gone to the wall.

Ben and Helen’s house had also been relocated to the property, carried down from Mauriceville in 2003. The previous owners had modernized the traditional villa, which still retains its much of its original character. But Ben and Helen have made the interior their own. 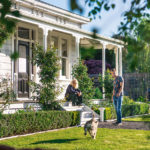 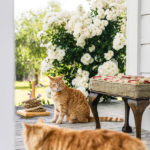 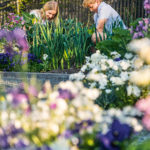 Stella and Harvey have inherited their parent’s creativity and connection with the outdoors. 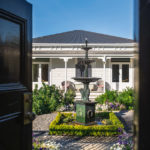 Ben and Helen’s traditional villa, originally from Mauriceville, was transported to Martinborough 17 years ago.

“We have quite an eclectic collection of artwork and furniture,” says Ben, “especially when you add our wallpaper to that.”

Inside, the villa is full of surprising forms, colours and textures that cohere in a highly individualistic way. A bright-green feature wall offsets a natural wood floor. Shelves, supported by vintage concrete breeze blocks, display a collection of retro coffee sets. Helen says a home should be an expression of the people who live there. “For me, interior design has been minimalist and boring for so long. As PaperHands has grown, we’ve seen people become more aware of adding depth and dimension, interest and personality, to their houses.”

Ben agrees. “I think there’s an appreciation of interiors that are a little more expressive and interesting. Homes are no longer just an investment that you do nothing to.” 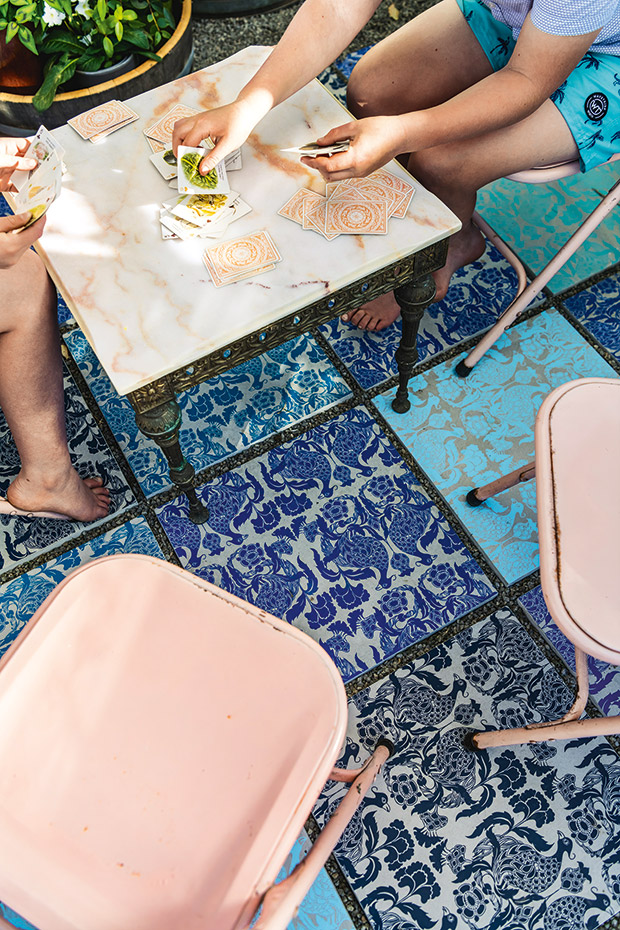 Ben and Helen’s love of patterns can be found everywhere.

An appreciation of space certainly extends to Helen’s formal garden. “I’ve always grown vegetables, but it annoyed me that the patch looked kind of sad – not beautiful – like a pottage garden.”

She contacted Hamish Moorhead, a garden/landscape designer based in Carterton, and they went to work. “We knew that no matter what the season was doing, the garden would have structure. You can have beauty and elegance and all those things, but if you can see a structure, then it all makes sense.” 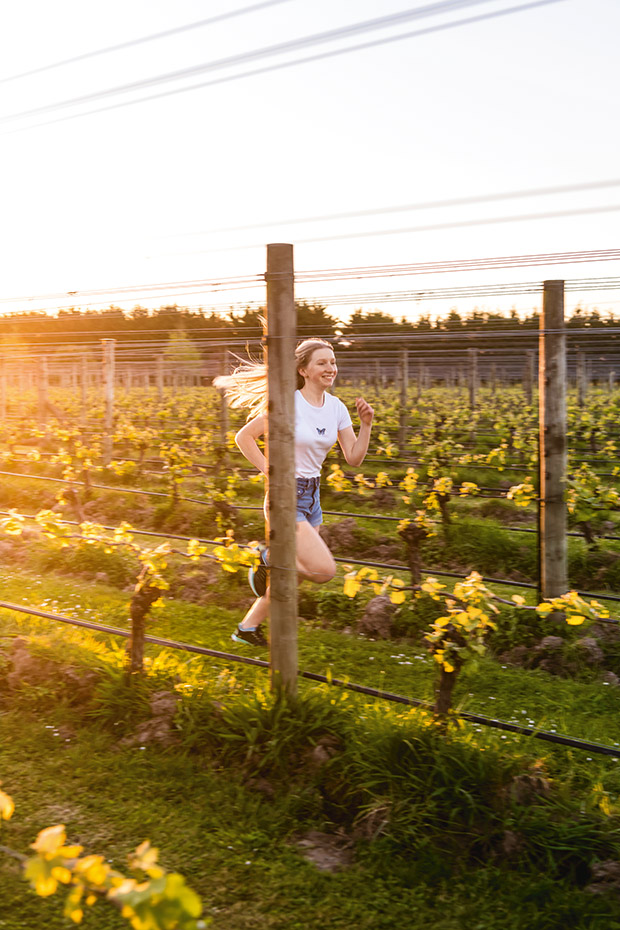 Stella runs through the family vineyard, which supplies fruit to Ata Rangi.

Having made an impressive vegetable garden with a three-tiered fountain centrepiece, Helen remains clear about its purpose.

“Primarily, it’s set out to grow food. We have a lot of people for dinner, and when we’re using vegetables from the garden, and drinking wine that either our friends or ourselves have made, it’s a great feeling.”

The spirit of producing food extends to a beehive for honey and olive trees for oil. “We feel quite connected on lots of levels,” says Helen. “It’s a real sense that life isn’t just working for somebody else. It’s about achievement and pride. It’s creating something and connecting with what we make.

“There’s a desire out there for something more human, and handmade, and more people are interested in enjoying the spaces in which they live.”

Helen Masters is not only heavily involved in PaperHands Print Workshop — she was also named 2019 NZ Winemaker of the Year by Gourmet Traveller WINE magazine. Creating award-winning varietals for Martinborough’s Ata Rangi Winery since 2003, she also travels extensively as the “face” of the business for overseas markets. Ben and Helen’s property also has rows of vines. “They are part of the whole ecosystem and supply fruit to Ata Rangi. It’s great because that’s one vineyard where I have to do the work.”

The couple’s daughter Stella (14) and son Harvey (12) help with the bud-rubbing (removing unwanted shoots and buds to assist vine growth) in summer.

“It’s a sense that we’ve contributed together to form something bigger than us,” explains Helen. 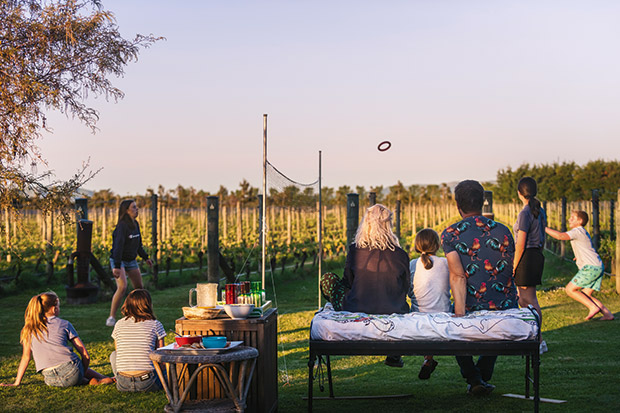 With their vineyard as a backdrop, the Masters family and friends enjoy a game of tenniquoits, a hybrid of tennis and quoits. Originally devised for playing onboard passenger ships, tenniquoits is also known as ring tennis.

“Craftsmanship is essential, and the wines that have resonance and provenance for me are those where I know the people have worked the land and have spent time trying to understand the soil and what wine it makes. It comes through.”