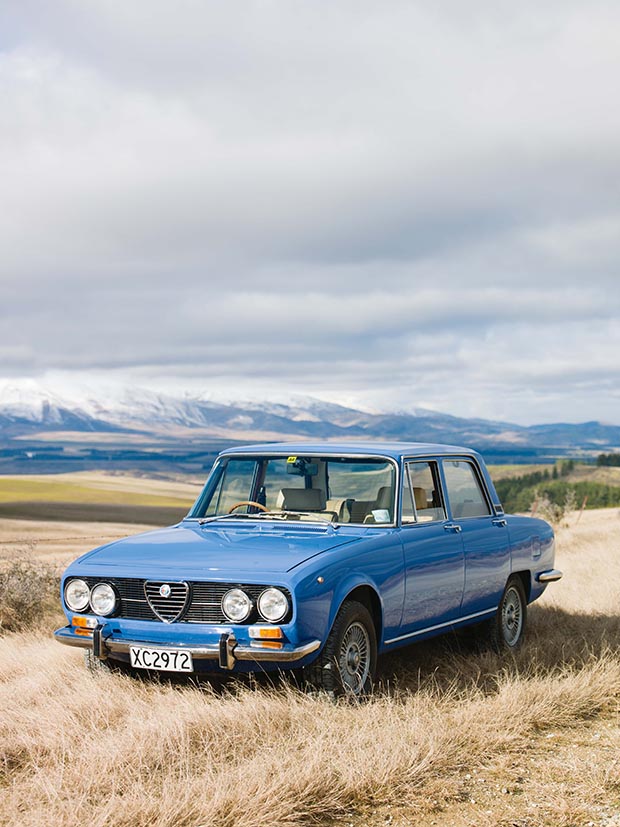 For more than a decade, Eric Swinbourn hankered after a friend’s Alfa Berlina. And then he got his chance.

In deepest darkest Central Otago, there’s a man who waited 12 years to own a car he saw and loved. Eric Swinbourn is his name, and he knows a solid gold Alfa Romeo when he sees it.

That’s exactly what he saw back in 2003 when a mate asked for his advice on the purchase of a 1974 Alfa Romeo Berlina. “It was beautiful, original and I was envious,” says Eric, a mechanical engineering whizz and classic car specialist.

For the next 12 years Eric didn’t own the car, but he saw it regularly. The Berlina was serviced at Eric’s car restoration workshop in Queenstown, and his admiration never waned. “I didn’t expect my friend would ever part with it, but he had a space problem and had to reduce his fleet. I bought it in a flash.” 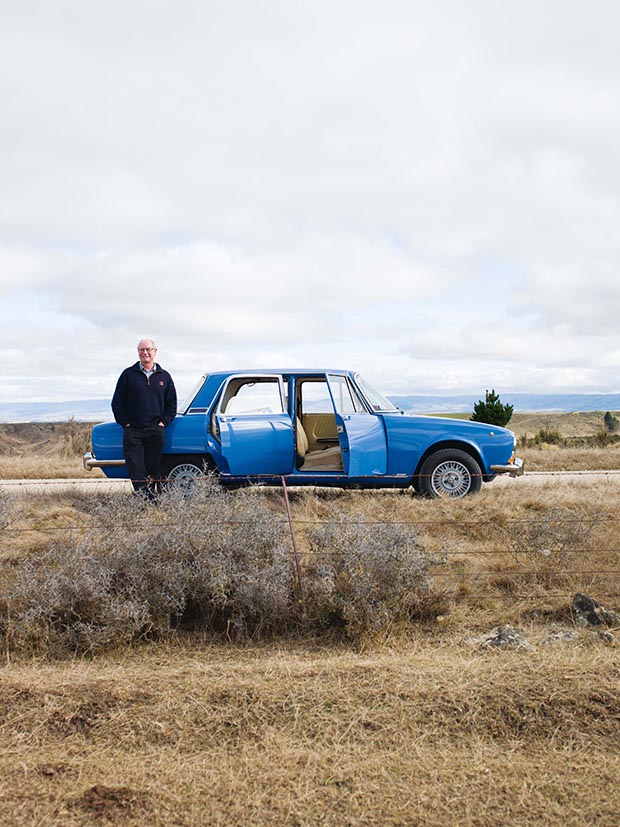 Two years after money changed hands between mates, Eric and his 43-year-old, two-litre Italian saloon are sailing along the Ranfurly-Naseby Road. “The Berlina was always the bridesmaid never the bride. It was often overlooked and its parts were sacrificed for the sportier Alfa Romeo Spider model, which everyone wanted. Numbers have thinned – there are possibly 20 to 30 left in New Zealand.”

Eric says his Berlina may not be the best-looking car, but its specifications read like a top-shelf sports coupé. “Its fairly average looks are deceptive. It’s the most communicative and rewarding car you could drive if you’re not in a position to buy a Ferrari.”

It’s equipped with an all-aluminium double overhead cam, a free-revving engine with a “good degree of gusto”, a five-speed all-synchromesh gearbox (“superb”) and four-wheel disc brakes (“brilliant even by modern standards”). It’s also highly capable in the speed stakes given its age – with a comfortable top tempo of 195 kilometres an hour and a happy pace at 160km/h. Today it’s nudging along nicely under a moody Maniototo sky. “With speed comes responsibility,” says Eric. 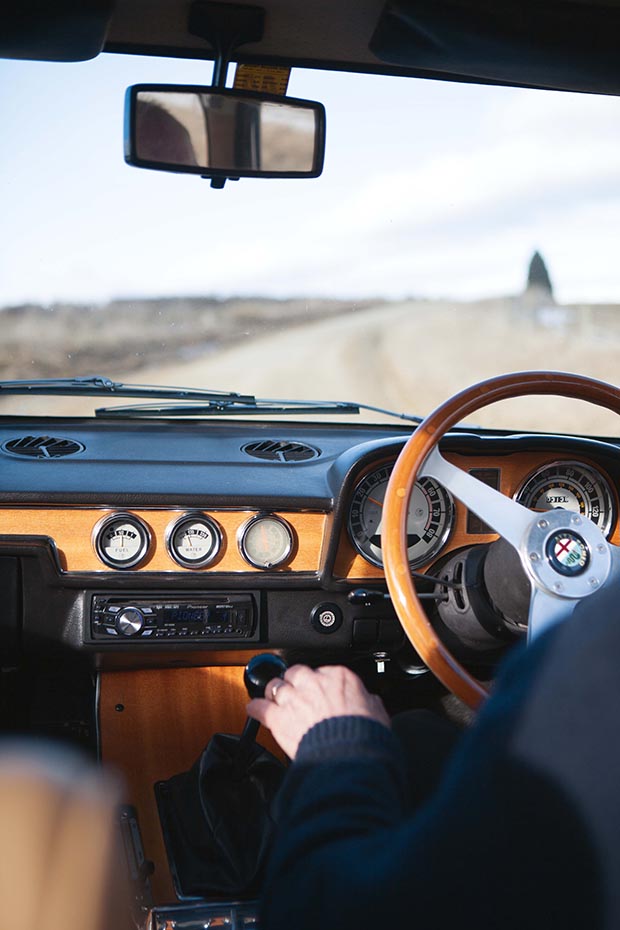 Registered new in New Zealand in 1974, the Berlina engine was rebuilt about 20 years ago, he believes. Everything else – upholstery, trim, instruments and polished aluminium and wooden steering wheel – is in sharp, original condition. “Driving this car is a special place to be,” says Eric pulling up in Naseby’s Derwent Street.

Engines, motorbikes, race cars and sports cars are a language Eric Swinbourn has always spoken. He grew up in Northland where his father – a fitter and turner by trade – worked as a machinery contractor. A young Eric was immersed in a world of trucks, tractors and mechanical componentry.

“Dad’s enthusiasm rubbed off on me. When he bought his much-longed-for first Alfa Romeo, I was at the impressionable age of 11. After that there was no hope.” 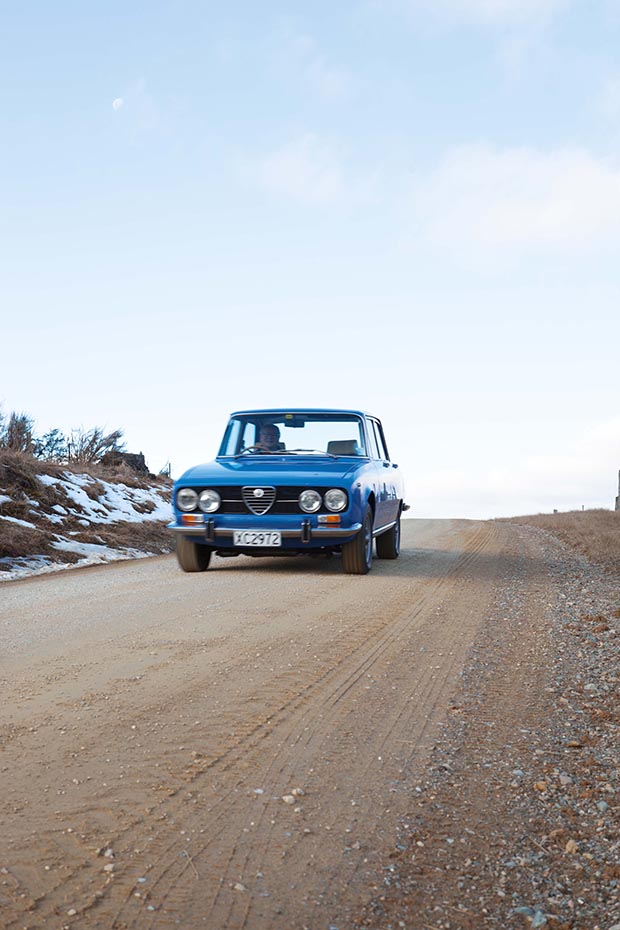 During an English class at high school, Eric recalls drawing a picture of a car in the back of his exercise book. “Cars rather than Shakespeare held my interest. I remember my teacher reprimanding me and saying ‘that will get you nowhere in life’.”

In fact, cars have driven Eric’s life. Having trained as an automotive machinist and motorbike mechanic, he worked in an engine reconditioning business, serviced bus engines, undertook advanced engineering tertiary studies, owned a motorbike shop with a Ducati agency in Auckland and specialized in overhauling classic cars, including Alfa Romeos.

He bought his first Alfa at 20 and over the years has owned more than 15 members of the Italian marque, as well 40 other cars – from Porsches to Morgans to Lotuses. In 1990, having followed his parents and sister south, he opened a classic car and race-engine preparation workshop in Queenstown. Business was brisk. When life faltered with a marriage break-up, it was the servicing of a Subaru that threw happiness his way. “A mutual friend asked me to work on Marilyn’s car as a favour – with some match-making in mind.”

Cupid swept in. Eleven years ago Eric and Marilyn – a North Otago girl – moved to Naseby (“the best place on earth”), where Eric re-opened the township’s historic garage and hung up his sign. When the couple married on a clear autumn day in 2008, they took their wedding guests for a quick tour into the back country in a convoy of 30 cars. “We wanted to show our visitors ‘our Maniototo’. We had morning tea with thermoses and sausage rolls up Buster Road, lunch at Glenshee Station, nuptials in our own backyard and dinner and dancing at the Naseby Town Hall.” Life has flourished. Two years ago Eric supposedly embarked on his retirement, but he’s having trouble making the grade, and his job sheet remains far from blank. He’s out and about in his Berlina at every opportunity, but there are other modes of transport in the Swinbourn shed.

A 2013 Alfa Romeo “with a very clever engine”, a 2009 Nissan X Trail “great for our big grocery stock-ups in Alexandra or Dunedin” and a 1996 Toyota Rav 4 “good in the snow and for carting hay to Marilyn’s horse”. Some personal restoration projects wait in the wings – a Fiat 500, a 1959 Skoda Felicia, a 1968 Trekka, a high-spec homebuilt race car (started in 1969 with his father) and several Italian-crafted classic bikes.

More stories you might like:
3 ways to use kawakawa (plus how to find kawakawa in the wild)

Across the road from his workshop, in an old shop, Eric has installed a display of tools, car parts, a train set, a vintage scooter and three old seats from the Ranfurly Town Hall. Occasionally when the sun sets in Naseby, Eric and a couple of friends sit here, rum in hand, and fix the world. The conversational agenda is vast – those poor devils who live in Auckland, Alfa Romeos, classic bikes, politics and the push for Naseby to become an International Dark Sky Reserve (the stars are incredible).

Despite his poor attempt at retirement, Eric has at least tried his hand at the much-loved local pastime of curling. “I was introduced to it by a couple of 80-year-olds who call me ‘laddie’, which is a boost in itself and I’m loving it.” One day he hopes he might even be known as “that curler”. But he concedes it’s a long shot. “I’m probably stuck with ‘that car man’,” he says.