Preparing for guests – in an off-grid house

When people are planning a first-time visit to our land, James and I brief them for the drive in. “Accelerate into the steep, tight curve,” we tell them. “Honk your horn as you ascend Blind Man’s Rise, take the streams at an angle and don’t stop until the road runs out.” If the forecast sounds wet, we may also mention that access is impossible after heavy rain until the stream levels drop.
Truck drivers initially hate us. 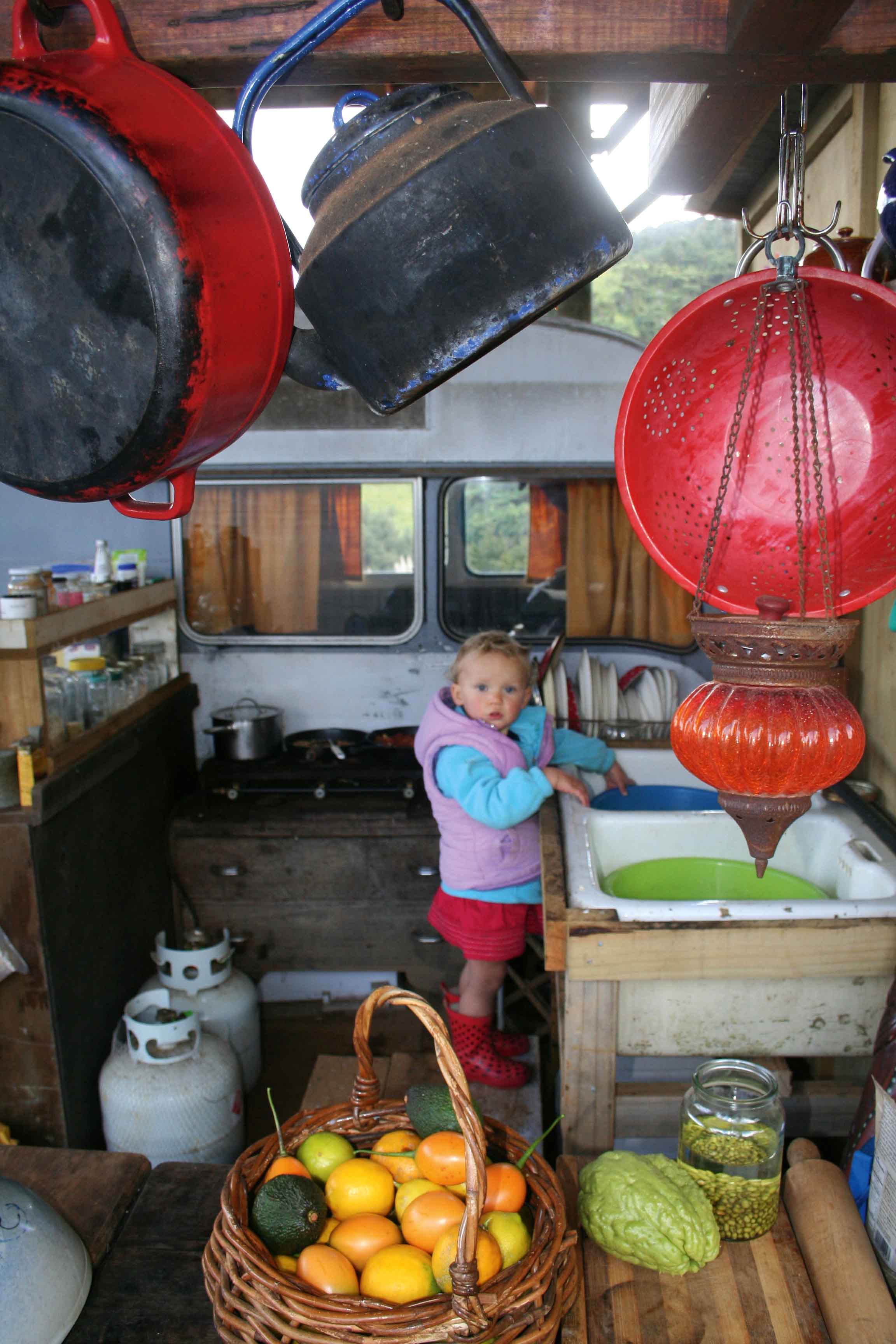 Vita at work in the kitchen.

Delivering a load of building materials, they arrive white-knuckled and decidedly terse but we know it’s just nerves and give them a quiet moment to recover. Once they see what we’re doing out here on the edge of the forest they soften and none have refused to return with more goods. Visitors who’ve had to build roads of their own are usually appreciative of the work that’s gone into ours but there’s another strain of caller who, having anxiously assessed the underbellies of their vehicles, can be heard muttering darkly about bloody goat tracks.
Once the journey in has been made, it seems fair to categorize our guests into two camps.

There are those who want to stay and those who would really just like to go home. A deciding factor seems to be our bathroom. In short, we don’t yet have one. There’s a compost toilet that works just fine, a solar shower for summer and an outdoor-fire bath in which one can soak beneath the stars, listening to nearby kiwi and the cold roar of the swollen stream on winter nights.
Guests who want to stay accommodate our rustic arrangements and embrace the outdoor experience, making the climb to our giant kauri and rimu trees on the ridge, resigning themselves to the sketchy cellphone reception and soaking up silence and camp-fire conversations instead. In comparison, our most reluctant guest refused to enter into the spirit of off-grid life at all. She arrived during our first winter, when we had only our caravan to live in, with plans to stay for a week. Overwhelmed by the mud and torrential rain and unable to get away, she drew the caravan curtains and took to her bench-seat bed in a funk of monosyllabic depression while we brought her meals and unkindly nicknamed her Gollum.
Back in those days, cooking during storms took considerable effort. The kitchen functioned under a tarpaulin against one side of the caravan. Although the gas rings had windbreaks around them, they blew out with every gust and salad ingredients blasted away off the chopping board. Even though the first room of our house is now built, James and I have chosen not to cook inside it. Our new kitchen area is beneath the roof, with a raised wooden floor and a sink with cold running water, but it still has no proper walls. Wind-driven rain gets in but these days we’ve learnt the tricks of the sou’wester and can keep the gas rings lit through all but the most vicious gales.
Cooking on winter nights remains a challenge. The headlamps we wear have the unfortunate habit of attracting legions of moths, some of which invariably drop into our saucepans. Foraging possums raid the fruit bowl if we forget to shut it away but friendly quail often wander in too, diligently pecking up crumbs, and sometimes a curious morepork stops by at dusk to watch with large eyes as we prepare a meal. Although an indoor kitchen is part of our long term plan, we can understand the people who declare we’ll miss what we currently have once it’s gone. Cooking outdoors means we never miss a sunset and chopping onions in the breeze ensures we never cry.

In the next post, Polly and James become involved in a community venture and discover that a quiet toddler is a wayward toddler when it comes to wet cement.