Lucy breaks down the essentials of a good toasted sandwich.

There’s much to admire about former First Lady Michelle Obama. She’s whip-smart, empathetic, accomplished, dignified – it’s not surprising that two separate polls declared her the ‘most admired woman’ of 2019. But oh my, she needs a serious lesson in the art of toasted sandwich making.

In Becoming, her best-selling memoir, she describes being able to make herself a cheese toastie to highlight the simple freedoms of her post-White House life. It’s a lovely image, until she ruins it by revealing she cooks the toast in a toaster and then melts the cheese in a microwave. It’s slightly gratifying that she’s not perfect, but as a dedicated maker and consumer of many a toasted sandwich I’m worried about the message she’s sending. Friends don’t let friends make cheese on toast in the microwave, OK?

So for the benefit of Ms Obama and anyone else in the dark about what might make a good toasted sandwich, let me enlighten you. I have form in this area, because I’ve made (and eaten) more toasties than you’ve had hot dinners. I thought I’d reached my nadir in my last year of boarding school, when I ate cheese and creamed corn toasted sandwiches for breakfast, lunch and dinner. This may sound extreme but the circumstances warranted it. In the final year being able to make my meals (albeit with limited access to equipment or ingredients) represented the taste of freedom. Bear in mind too that this was Napier in the early 1990s – the panini had not yet reached our shores and the closest I’d got to a sun-dried tomato was probably happening upon a dropped slice on the netball court. Still, it was an object lesson in how to feed ourselves (and that if we left the plastic bread bag next to the machine it would melt faster than a slice of cheddar).

The reason you can’t make a good toasted sandwich in a microwave is because it needs to be a study in contrasts: soft/crunchy, sweet/sour, soothing/spicy, molten and crisp. It needs structure; a beginning, a middle and an end, if you like. The opposite of microwaved flabbiness.

From an assembly point of view, this means striking the perfect balance of filling. Too much and you risk the toastie being lukewarm in the middle (or the contents spilling all over you as you eat); too little and you’ll be left with dry crusts. An ample sufficiency should be the goal (in toasted sandwiches and life generally).

A current nationwide toasted sandwich contest run by a pickle company is encouraging cafes and at-home toastie makers to be creative. This is all well and good, but there are some things that don’t belong. Tomatoes for example, are a grave mistake. Even if you do strike a rare flavour-filled one at this time of year, it will spoil the overall experience by burning the roof of your mouth, your fingers or your chin during the eating process. 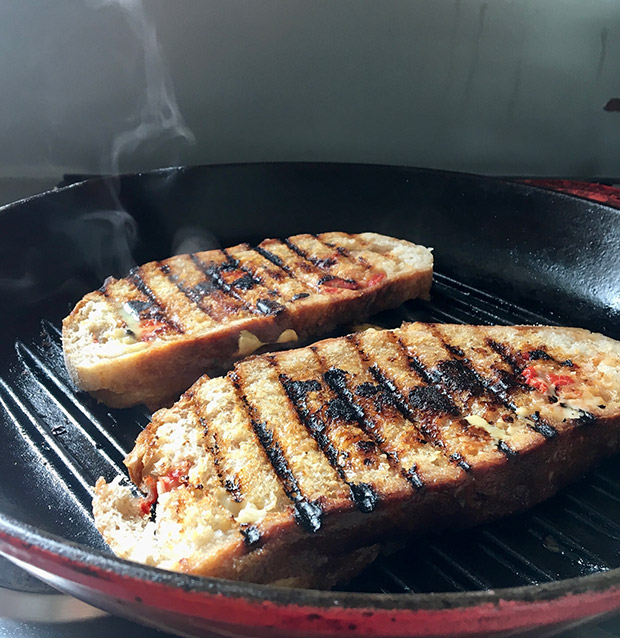 Avocado should be avoided at all costs, as should the unholy trinity of chicken, cranberry and camembert. Creamed corn is still off my list and I’m not convinced by spaghetti (though in her 1991 cookbook Pastability, Lizzie Spender does a fabulous job of describing the spaghetti and white bread toasted sandwiches she enjoyed for smoko on an Australian cattle station in the Kimberleys). I know thisNZlife editor Emma is also a fan, so in the interests of keeping my job I’ll let that one pass. She reassured me she doesn’t add pineapple — some lines should not be crossed.

It can be good to think out of the box though: contributors to the toasted sandwich forums on Reddit are adamant the way to guarantee golden, crunchy bliss is to spread mayonnaise on the outside of the bread before toasting. This sounds counter-intuitive, like wearing your underpants outside your trousers, but it actually works. Other unusual (and winning) combinations include sliced apple and dates with cheese, or peanut butter, banana and dark chocolate. I doubt that nine out of 10 nutritionists would recommend the latter, but it has seen me through thick and thin. Our family dependence on toasted sandwiches reached an all time high during lockdown, even though our sandwich press was broken and we had to fashion a makeshift one. We’d set a grill pan over the element, wrap the sandwich in baking paper, put it in the pan and then layer two heavy frying pans on top. It worked a treat, but we burned (sometimes literally) through reams of baking paper and lifting the pans out of the low cupboard was such a struggle it should have given me arms like Michelle Obama.

After lockdown we treated ourselves to a new toasted sandwich maker, which means we can now follow the excellent advice of esteemed food writer Ginny Grant. She recommends putting a sandwich press on the benchtop and leaving it there for the duration of the school holidays, so children of all ages learn the magic to be made from bread, cheese and random fridge findings. I’ll raise a (cheese) toast to that.