Polly and the family escape the forest mud by visiting the South Island.

You know you’ve got location-envy when you look out the window and don’t see what is really there. Instead of seeing dark dripping bush closing in on the hills, I’m warming my heart on  a mind’s eye vista of golden tussock-lands shining beneath the ceramic blue of an alpine sky. It’s a lingering memory, caught during our family holiday to Wanaka and oh, how it’s making me sigh.

Whoever said the grass is always greener over the fence knows nothing about Northland winters. Verdant shades imply rainfall and we’ve got that by the bucketful. I don’t want sodden green. Tawny land crouching like oversized lions is what I yearn for.

In Wanaka everybody was dressed in puffers and beanies. In the Far North mud is the obligatory winter accessory and it’s piling up by our doorstep in good time for the changing season. The dog brings it in on his paws as he tries to escape thunderstorms. Three-year-old Zen sports it from the waist down every time he slips in a puddle. Six-year-old Vita wears it in across her front after giving pet rabbits their morning hugs while I collect streaks every time I connect with the car. Brown is our trending rural colour. The children wear it both excessively and gleefully. James and I grimace as it works its way indoors and splatters our wardrobes when we venture out.
Sure, Wanaka was cold but it was a dry-ice kind of chill that made us inhale deeply and stamp about on the iron-hard land with exhilaration.

‘Look at this,’ James pointed one afternoon as we exhaled steam along the banks of the crystalline Clutha River. He was marvelling at a park-bench. The wood had a smoothed dry grey patina. In the Far North park-benches are pitted with black rot. Mould is part of the local flora.

It rained once during our holiday, but considerately, during the night, and in the morning, we discovered the snow-line had crept down the surrounding great ranges while frozen droplets hung suspended from skeletons of trees. Vita danced barefoot across the frosted lawn as the sun rose and beauty seized her.

Such stunning landscapes demanded us outdoors each day and while Zen had a tantrum at the foot of Mount Iron and had to ascend on James’s shoulders, the scale of those mountains and lakes; the sense of such vast shaping forces and all that empty land transformed any whining to joyousness as we stood where the land meets the sky in its clashing crescendo.

It’s unfair to compare such very different places but even Wanaka’s op-shops were superior to Kaitaia’s over-picked and bobbled offerings and while sprawling new suburbs were proof it’s a coveted location, residential developments hadn’t robbed the land of its grandeur. 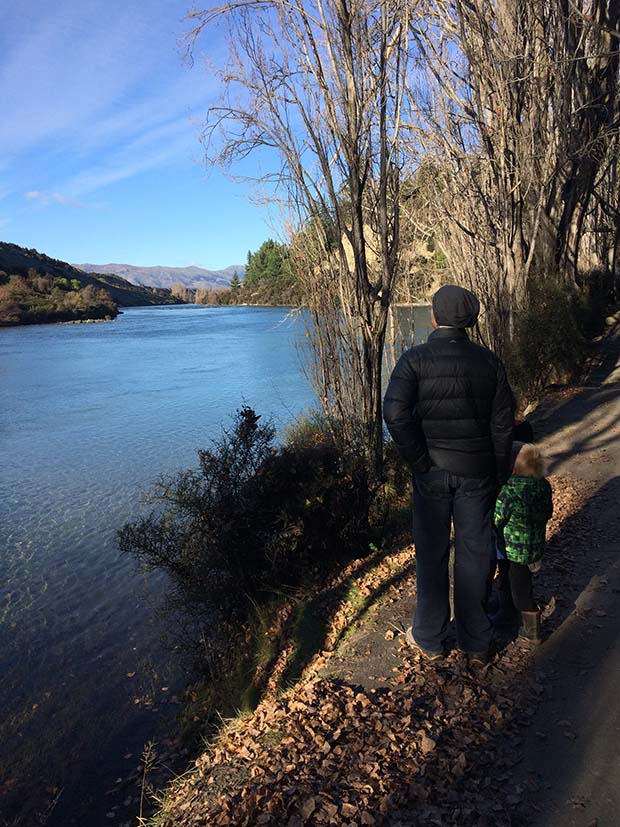 When our homeward-bound flight hit turbulence over Queenstown’s Remarkables, the plane tipped and lurched like a yacht on high seas. The children thought this was part of the holiday magic and shrieked with delighted laughter at the sensation of their stomachs dropping away, calling for more.
Wanaka and associations, it seemed, could do no wrong.

More stories you might like:
Lucy Corry's Blog: Say cheese (and hello to an easy mascarpone recipe)

Back home, James and I pulled faces as we unpacked the car. There had been big rains in our absence. Muddy patches festered across the property like open wounds.
‘Let’s shift,’ we began our next conversation.

An email arrived from a woman down south. She and her husband were thinking of selling up and moving to Northland.

‘We have been keeping an eye on the temperatures jealously from freezing Christchurch, wishing we were there already.’
‘Imagine how green and oxygen-rich this would seem if you’d spent seven years in Wanaka,’ James mused as we surveyed our forest.
‘Can you keep a vegetable garden down there over winter?’ I wondered as I brought in an armful of harvested salad ingredients.
Green isn’t such a bad colour after all, we decided. Besides, wasn’t a certain yearning just a natural sign of a damn good time?

We asked the kids what their favourite experience had been. For Vita it was the boat-ride with her uncle to Mou Waho Island and an afternoon watching eels with her aunt.
Zen disagreed. The holiday house fridge had been his highlight. ‘I liked the milk.’