Life whizzes past when James and Polly build a flying fox.

Even before we started our house, James began planning the sauna. Sometimes we debated where it came on the list of building priorities, but I’d always known it would rank highly. My husband’s passion for saunas was such that he took me to one on our second date; a public rendition of hot, sweaty courtship, so-to-speak.

In the end, our homemade sauna arrived after the construction of the indoor kitchen and bathroom but before the kids’ bedrooms. James built it during the lead-up to last Christmas, producing a handsome outdoor box from piles of recycled materials and untreated eucalypt.

While other Kiwi families headed to beaches and rivers during hot summer days, we traipsed across the courtyard to sweat it out, sweltering as a tiny woodstove pumped heat into our new wooden room. Although it’s perverse taking saunas beneath a fiercely blazing sun, James spoke so persuasively about the health benefits, friends soon arrived to perspire alongside us.

The sauna wasn’t the only thing being fulfilled on personal wish-lists. Imagine stepping out your back door to discover a zip-line or flying-fox whizzing off downhill from the garden. I marketed it to James as every child’s dream, but we both knew who really desired it. 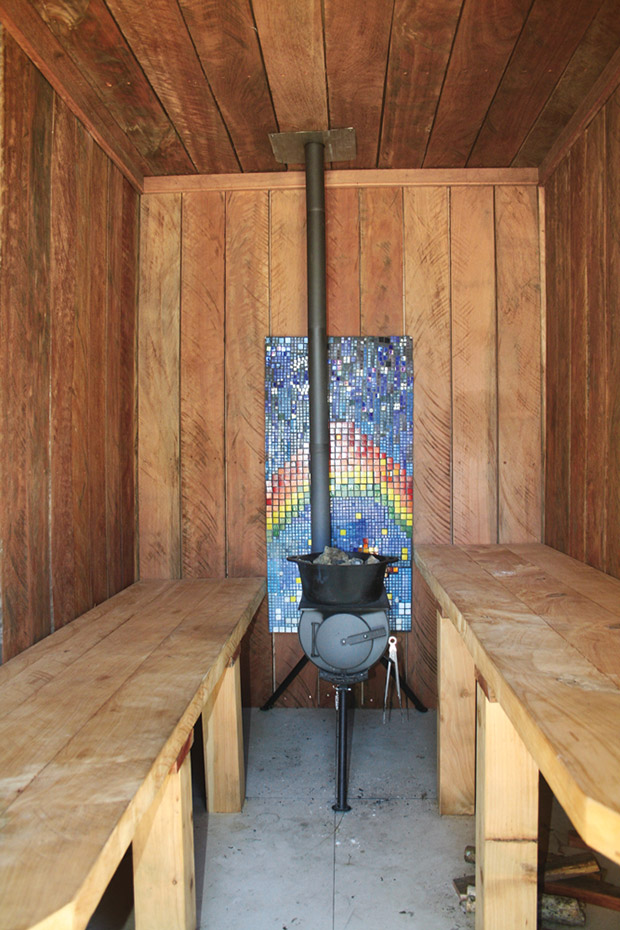 Sadly, there’s been a notable dwindling of spousal enthusiasm for my ideas since we first met.  “A man on You Tube installed a DIY one in just under two hours,” I added alluringly.

We bought the components from a hardware store but James was too busy crafting the sauna to get the zip-line installed for Christmas. “The kids can help make it too,” he declared on Christmas Eve, festively wrapping the steel cable, pulley and various turnbuckles. He denies saying it would be family fun.

It certainly wasn’t. Five-year-old Zendo had both the 30-metre cable and parental joviality tangled in knots before James had even donned his tool-belt.

A long and trying afternoon followed, clambering through prickly totara trees and barking for misappropriated tools but eventually we had the zip-line pulled tauter than a tightrope. Rather grandly, we announced it ready for the maiden ride. Scrambling to be first, eight-year-old Vita plonked on the seat and promptly sank to the forest floor.

“Oh.” She eyed us reproachfully.

Mentally blocking the You Tube man’s claim about two-hour zip-lines, we rigged it all up a second time, only significantly higher, before again pronouncing it ready.

It could’ve been a home-schooling opportunity to ponder on velocity and physics but our ride-greedy daughter leaped on the seat before my words formed. Her victory yell morphed into a high-pitched scream as she hurtled downhill in a blur. The speed she picked up was extraordinary. There was just time to register an impending crash before the pulley slammed into the stop-plank nailed between two trees. Filled with momentum, our daughter shot past it like a chicken fired from a canon. 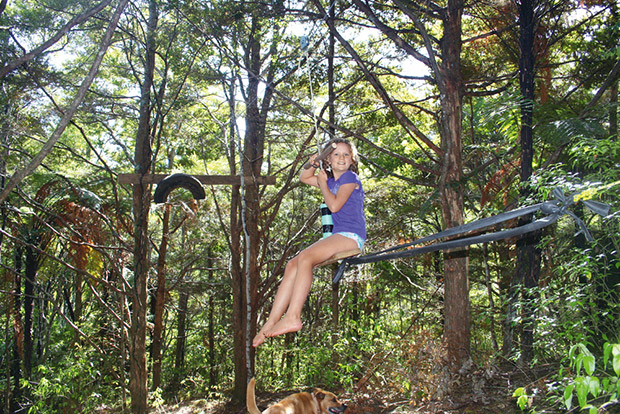 Vita trying out the flying fox.

Was she laughing? I let out a hopeful chuckle but swiftly rearranged my features when it became evident her gasps were, in fact, wails. Dangling several metres overhead, she took some persuading to drop into our arms. Arnica cream was liberally applied.

A car-tyre was wrestled up to soften the endings and bicycle inner tubes were added to form a self-braking system but for some unfathomable reason, James also greased the pulley before he called for another tester. The children again fought. This time neither wanted to go first. Finally Vita conceded to ride it from halfway down.

Her shriek could’ve been one of pleasure. “Was that better?” we asked hopefully once we’d helped her down and inspected her new impact-bruises.

“You ride it,” she said through gritted teeth. Guilt saw me clamber on. My screech was involuntary. The hideous sensation of careering into trees at whiplash speeds entirely erased my zip-line enthusiasm.