It was only after James and I moved to Northland that the word “rumpty” entered our vernacular. A local, living in a nearby valley, gave us the adjective while describing his house. “It’s a bit rumptydo,” he said and we instantly understood it. Coastal developments aside, rumpty is, we realized, one of the Far North’s defining words. The tumbledown shacks by roadsides, the kids riding bareback on horses, the lumpy kikuyu grass smothering abandoned machinery in fields, the homemade houses built in the bush from salvaged materials, the gumboots and bare feet, the freedom cows wandering the back roads, the creative improvisation of people a bit strapped for cash… all of these things are flavoured with a certain dishevelled, she’ll be-right, rural rumptiness.
By ordinary standards, our friend Johnny’s house is also somewhat rumpty.

Painted in circus stripes by a well-meaning family who wished to surprise him after a trip away, it sports a few holes too many in doors, floors and walls. The exposed ceiling insulation gives each room a cotton-wool feel while the elderly water pump, inconveniently located under the house, needs prodding back to life a few times a day. After 18 months in a caravan, however, the place seemed downright palatial when we moved in for a winter while Johnny travelled overseas. “You’ll get lots of visitors down there” the people of our valley predicted when they heard about the temporary shift from our building site. Even though it’s still rural, Johnny’s place sits behind the hub of the Bush Fairy Dairy and it wasn’t long before we found ourselves putting the kettle on for spontaneous guests. 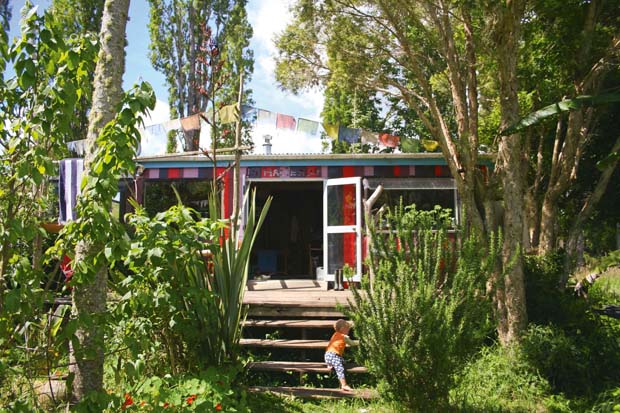 Settling into our new surrounds, James, baby Vita and I set to exploring the food forest Johnny has planted across his land, taking paths through thickets of banana palms and macadamia, avocado, cherimoya and citrus trees. A bounty of tamarillos glowed jewel-like in the gloamings but we were startled to also uncover a family of gypsies parked up in a house-truck, merrily harvesting armfuls of greens from the vegetable gardens and helping themselves to the electricity. Our eyebrows lifted even higher when we discovered a British overstayer hiding out in the shed. Shooing them on, we shrugged off their accusations of “uncommunity mindedness”.
In fact the sense of community linking our country neighbourhood has been an unexpected pleasure for James and me. When we first took the winding dirt roads to our land, the only signs of human habitation were the wonky letter-boxes marking driveways that disappeared into the bush. Tucked away in our valley, which no planes pass over and no cars drive through, it felt as if the only thing connecting us to the outside world was National Radio.
Then we got to know the neighbours, and their neighbours, and it was as if a contagion of introductions exploded around us. Suddenly, what had seemed a rather beige and threadbare cloth has turned out to be a very colourful and vibrantly patterned social fabric indeed: a mishmash of homespun, ethnic prints and sensible plaid woven together by exhippies and farmers, expats and exiles.
In a suburban past life, chance encounters with fellow locals used to pass with a perfunctory greeting. On country roads, “hello” frequently leads to an hour long conversation. Cellphone reception might be dodgy but the bush telegraph is thriving, as are the shared dinners, the music and film nights, the homeschooling play dates and the working bees. Before Vita was born, our midwife officially listed us as a remote residence but, despite the distance between houses out here, we’ve never before felt so close to the neighbours.

In the next post, Polly and James perfect their recipe for mud-bricks.