Lynda Hallinan’s Blog: How to sprout a kūmara in no time at all

Time: why are we so obsessed with it? We fret about wasting it, set alarms so we don’t miss a second of it and buy gizmos and gadgets to help us save it. Then, every six months, we change our clocks in unison and – depending on whether you’re a gardener or the parent of a toddler – delight or despair at the thought of a whole extra hour of it to fritter away before dark.

I always do a little happy dance at this time of the year, even though daylight saving is an artificial construct. The sun rises and sets as it always does, giving no regard to the Internal Affairs bureaucrats who rubber stamp The New Zealand Daylight Time Order (2007). And, given that I work from home, technically there’s nothing (aside from writing deadlines and children wanting food) to stop me getting up earlier or staying out later, with an LED headlamp strapped to my noggin, at any time of the year. 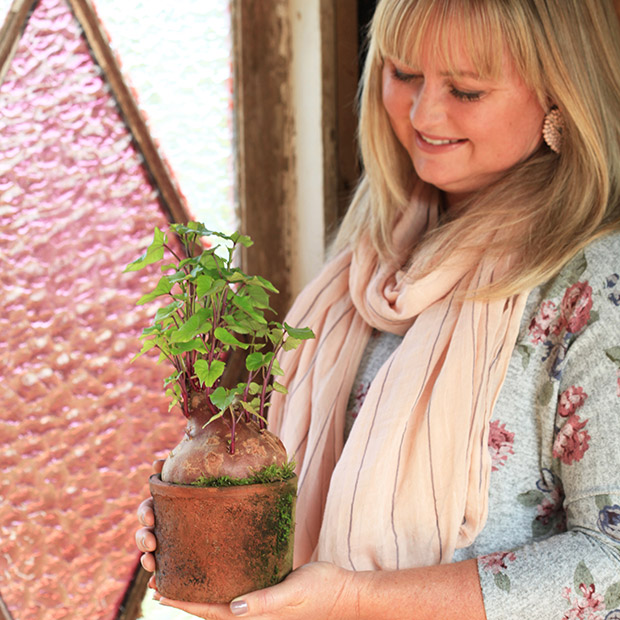 Lynda poses with her son Lachie’s lockdown kumara back in June, when the sprouts were just starting to grow. Nip them off at this stage to root in water and transplant outdoors at Labour Weekend.

Just not this year. This year I feel like I’ve lost track of time altogether, as 2020 has sped by and stagnated in equal measure. As the days get longer, so do my “to do” lists, but the global pandemic appears to have laid waste to my circadian rhythms. During the first Covid-19 lockdown I embraced the sneaky afternoon siesta and, six months later, I’m afraid I’ve become rather attached to the nana nap. It’s such a guilty pleasure, though a bit embarrassing when you’re caught in the act by a fencing contractor or courier driver.

When I do get to work in my garden, I’ve taken to thrashing pop queen Taylor Swift’s new album Folklore (although thrashing isn’t quite accurate for such a mellow soundtrack; it’s more like plumping a kapok pillow). Folklore, which Swift wrote and recorded in secret after her planned concert tour was canned because of Covid-19, is marvellously in tune with the times.

It feels like many of us are feeling: angsty, melancholic, emotionally all at sea. In one track about the end of a summer fling, she sings about being “lost in the memory… slipped away into a moment of time… sipped away like a bottle of wine”. 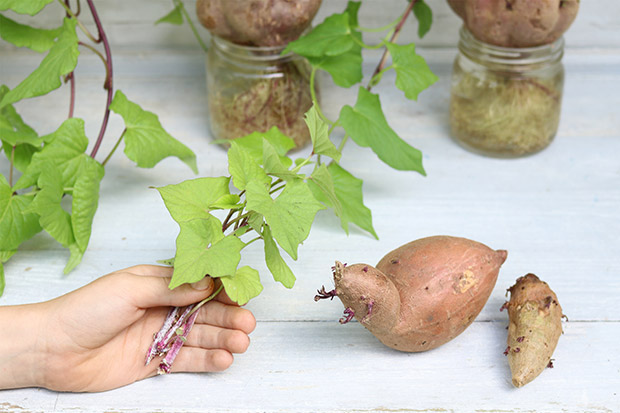 To grow a crop of kumara in your garden, nip off the shoots when they are about 10cm long and have a few pointy leaves. Place these in a jar of water until they have grown roots (about 10 days). Transplant at Labour Weekend.

At the beginning of the Level 4 lockdown, my seven-year-old son Lachie’s teacher Kiri cheerfully Zoomed on to our computer screen to challenge her pupils to grow something from nothing: to skewer a spud, kūmara or carrot top over a jar of water until it sprouted.

Lachie’s carrot rotted but his ‘Owairaka Red’ kūmara spawned 17 green shoots and, along with half a dozen other tubers, is now colonising our lounge in a tangle of sweet potato tendrils that are growing longer by the day. It means I can literally measure the length of New Zealand’s Covid-19 response: 3.4m.

But last week, when Lachie had to deliver an end-of-term school speech about his time in lockdown, his kūmara didn’t even get a mention. Instead he wrote of trying new foods; taking long (socially-distanced) walks through the Hunua Ranges; and, for shock value, his horror at watching helplessly as a murderous pukeko dove into our stream to turn a hapless eel into freshwater sashimi. The trailing vines of a sprouted kumara tuber make kitsch houseplants, either sitting over a large jar of water or potted up in a container.

These details were invented for my reputational benefit. “I didn’t want everyone to know that I just stayed home and played on my iPad all day,” he confessed. (For the record, native pukeko do have a habit of dismembering wild ducklings and we did make sushi for the first time during the lockdown, even if Lachie wasn’t actually game to eat any.)

Had my son preferred fact to fiction, he could have recounted the autumn night when a startled ruru (Ninox novaeseelandiae) swooped into our bubble, all boggle-eyed and Caramello-feathered. Though I’ve often heard our native owl’s distinctive double-hoot “more-pork” call in the bush, I’ve never seen a bird in the hand before. 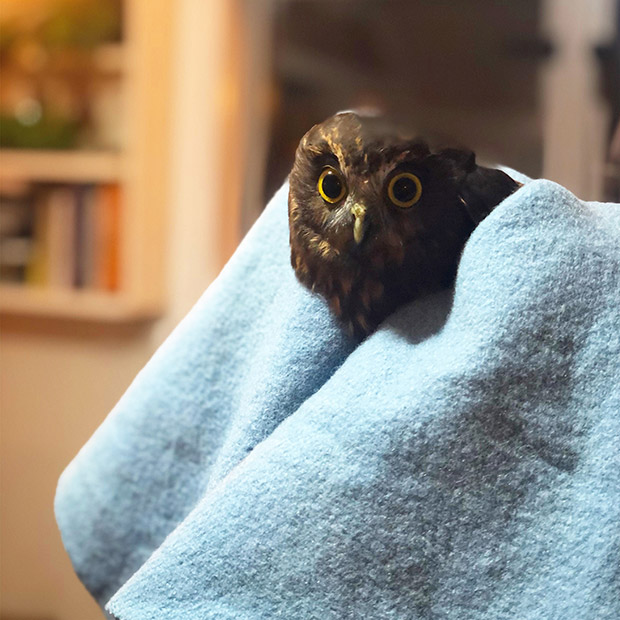 On a dark and stormy night in the first lockdown, this startled ruru (aka native morepork) flew into Lynda’s bubble. In Māori mythology, the ruru is considered either a watchful guardian or a harbinger of gloom and grief.

They’re teeny-tiny, with the boys weighing in at around 150g and the girls only a smidgen bigger. The wee thing must have taken a wrong turn while out hunting for insects, so my husband gently scooped it up in a woollen blanket and, after snapping a quick pic on my phone, we released it back into the night.

Lachie’s lockdown kūmara will have to wait a few more weeks for its liberation, however, until the warmth returns to our soil and the shining cuckoo returns to our shores. According to Māori tradition, when the distinctive dog-whistle call of the pīpīwharauroa – another native bird more likely to be heard than seen – rings out from the treetops in October, it’s time to tuck your kūmara tubers into mounds of soft, sandy soil.

HOW TO SPROUT A KŪMARA VINE

1. Whether you want to sprout a kūmara vine as a trendy trailing houseplant, or harvest the bareroot runners to plant in your vegetable garden, all you need is a large jar of water and a store-bought tuber. ‘Red Owairaka’ is the easiest and quickest variety to sprout. (Despite starting them all off together, my gourmet golden ‘Toka Toka’ and orange ‘Beauregard’ tubers have taken their sweet time to produce sprouts.)

2. Fill the jar with water and sit the tuber on top, so about 1cm of the base is submerged. Use toothpicks or kebab sticks to hold the tuber in place if it’s smaller than the width of the jar mouth. Place the jar on a warm, sunny windowsill and top up the water daily and change it if it turns green. It’ll take 2-3 weeks to sprout roots and shoots.

3. If growing your kūmara vine as a houseplant, you can either let it trail down or train it up and over a wire topiary frame (available at garden centres). 4. To grow your own kūmara for eating, you can simply plant a whole sprouted tuber, as you would a seed potato, or harvest the individual sprouts (called bareroot runners) off the parent plant. When these runners are about 10cm long and have a few leaves, gently prise them off the parent tuber and pop them into a jar of water. They’ll produce roots within 10 days.

5. Kūmara need a long, warm summer to grow. Wait until after any risk of late frosts has passed before transplanting into mounds of free-draining, fertile soil. In marginal climates, try growing kūmara in large plastic flexi tubs with holes drilled in the base. By planting them in a portable pot, you can bring the vine inside at the end of summer to continue cropping.