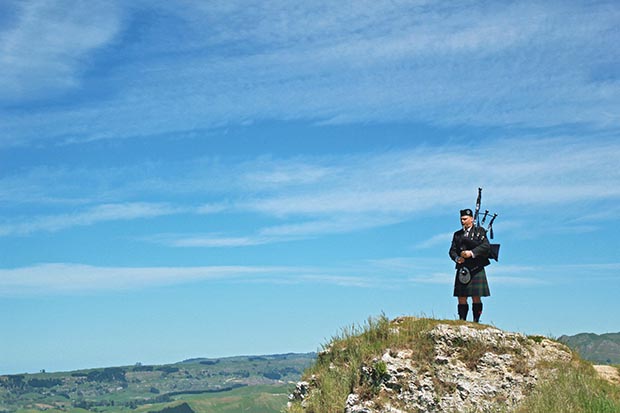 One of Australasia’s most successful bagpipe players, plays a triumphant tune that drifts from the flat plains of Palmerston North to the Scottish Highlands.

There are two people unfazed by Stuart Easton’s reputation as one of the world’s best bagpipe players. Kate (5) and Rory (2) aren’t interested in their dad’s awards and medals. As long as he keeps playing them the Wiggles and their favourite nursery rhymes, they’re happy.

Should Stuart be the type to flash his trophy cabinet, then he would no doubt have enough silverware to set a royal banquet, but that’s not his style. He’s too busy balancing work as a Villa Maria territory manager and co-owner of Easton Pipes and Dance (pipesdance.co.nz) with competing in competitions to make a lot of noise about his success. “Pipers tend to be humble people,” he says. “We try to fly under the radar.”

In the bagpipe world, Stuart is considered a late bloomer. He was 13 years old when he first picked up his pipes. Stuart grew up surrounded by tartan – his dad Murray was a competitive piper, and his older brother was a side drummer in the local pipe band. “From the moment I picked up my first pipes, everything happened at speed. Typically, you start off at grade three or four and work up, but in Levin there were no lower grades available, so I was straight into the upper grades.”

Just three years later, in 1997, Stuart was playing in the Manawatu Scottish grade one band and competing at his first world championships in Glasgow. “It was a rapid progression, but that first championship inspired me to keep with it.”

He’s now been competing, and winning, at the elite levels of local and international competitions for 20 years. While Stuart can claim Scottish heritage – his great-grandmother is from the Clan Murray of Atholl – genetics and natural talent can only take a piper so far.

“The bagpipes are one of the most challenging instruments to learn, but also one of the most satisfying to play. A lot is going on – you need to inflate the bag and keep an even pressure while playing the melody on the chanter. It’s a big instrument that requires a lot of technique and coordination to learn; it’s no piano – you can’t just hit a key.

“Bagpipes require a fair amount of practice. I try to play at least an hour a day. It’s not about how long you practice but how smart and dedicated you are about it – it’s important always to strive to be better. Physically, you need a decent level of fitness and lung capacity; my pipes are fully silver mounted and weigh a tonne so it’s like going to the gym for an hour.”

There’s a strong Scottish community in New Zealand – a heritage often embraced by those without far-reaching roots in family trees. “The settlers brought their music with them, and their traditions are kept alive through the various clubs and annual Highland Games. Three of the top 12 pipe bands in the world are from New Zealand – we’re incredibly competitive on the world stage.”

Bands and solo pipers have a schedule of events that runs through the year, and competitive pipers need a successful track record to qualify for the two major solo contests at Oban and Inverness in Scotland. Stuart regularly competes as a solo piper, as well as in his role as pipe sergeant of the Manawatu Scottish Pipe Band.

In 2017, he finally achieved a big goal – winning the prestigious Northern Meeting Silver Medal competition at Inverness. It is an accolade he’s been eligible for 10 times, came close four, and finally took home in August. “The Silver Medal was the biggest competition in the world that I was eligible to win. Winning this is like gaining entrance to the ultimate league of champions, and gains me entrance to the Gold Medals at Oban and Inverness in 2018.”

It was also a win worth the wait. “Competing is a huge commitment of both time and finances; you enter for prestige, not money. I knew I had played the best tune of my life, but you can’t influence anything other than yourself. It was a nervous six-hour wait to find out the results, then an excited 5am phone call to my wife Shelley.”

Back home, the medal is in the trophy cabinet, and the Wiggles are in hot demand yet again. Stuart’s happy to oblige, though occasionally he does mix it up a bit with some bagpipe AC/DC.

Stuart and Shelley, a competitive Highland Dancer, own and operate Easton Pipes and Dance, where they share their expertise with the next generation of musicians. “There are no special skills needed, only maturity and commitment.” To experience the pipes live, visit your local highland games.