From protester to broadcaster to poet: Dr Haare Williams uses many mediums to bridge the distance between Māori and Pākehā Haare Williams has spent a lifetime bringing the two worlds of his soul together, using words, images, calligraphy and conversation to help bridge the distance between Te Ao Māori and Te Ao Pākehā.

Dr Haare Williams MNZM has been a teacher, pioneer Māori broadcaster, poet, writer, artist and, like many contemporaries of his generation, a protestor. Recently he became a published author with his first book, Words of a Kaumatua (edited by Witi Ihimaera and published by Auckland University Press) telling of his journey in reo Pākehā and reo Māori through poetry and prose.

WHAT WERE THE MOST FORMATIVE INFLUENCES IN YOUR LIFE?

“I think it was the isolation of the Ohiwa Harbour (near Ōhope) and the piece of land that I lived on with my grandparents. They had been “evicted” from their land in Te Urewera by the heavy-handedness of the Crown.

“The experience and subsequent poverty and alienation became part of their richness. Later, it became my richness as well because my grandmother, Wairemana, forewarned I would have to fight for my land, identity and language. She was right, and to that end, I have triumphed over poverty and adversity.

More stories you might like:
The gin gardener: This organic 'gin garden' in Hastings is brimming with botanicals

“As a child, in the evening when it was quiet and the Ohiwa Harbour still, I would listen to the mumbles of karakia (prayers) reverberate and then, right at the very end, hear the collective āmine. I am a practising Ringatū [a religious movement founded by Te Kooti Arikirangi Te Turuki, one of the best-known Māori leaders of the 19th century].

“I write, paint and narrate the living spirit in the spoken word. These beliefs have influenced my approach to the many leadership roles I’ve taken on.

“The tapestry of my life has been woven with words that convey many meanings that link back to my faith, helping me interact and engage with my contemporaries across all areas. Hone Tuwhare, Cliff Whiting, Hana (Jackson) Te Hemara, Syd Jackson, Sir Graham Latimer, Dame Kāterina Mataira and Dr Ranginui Walker were the change-makers whose actions created a more inclusive and culturally rich landscape. I helped tell the stories that were shaping our thinking and actions of those times.”

WHAT IS YOUR BIGGEST GOAL FOR YOUR PEOPLE?

“We’re riding an ocean of change, a tsunami if you like. I see rangatahi, Māori and Pākehā and other cultures, who believe in New Zealand, who believe that we can be the most liveable small democracy on the planet.

“I see the future of New Zealand in good hands with our women, rangatahi Māori women, stepping to the front, forging a way forward, working on climate change issues using tikanga and indigenous knowledge. We have depended on western solutions for too long, but there is a wairua (spirit) inherent in indigenous people — like kaitiakitanga.

More stories you might like:
Explore this Kiwi film-maker's home in Mexico — where she's lived for 36 years

“Mātauranga (Māori knowledge) shows we’re not cultural artefacts sliding away into corporate oblivion; that we as Māori and as a nation have something that is the envy of the world. As we face the relentless demands modern practices have placed on our whenua (land), moana (sea), and ngahere (forests), matauranga Māori has the ability to give us hope, aroha and peace.

“I look to our rangatahi with a vision to the future. I have mokopuna who I want to inherit the best that the world can give them, to reach their full potential as kaitiaki of our values.”

HOW HAVE YOU SHAPED YOUR LIFE TOWARDS ACHIEVING YOUR GOALS?

“With storytelling. Māori have a tradition of oral literature, a spoken literature handed down by word of mouth, and whakapapa (lineage). A literary narrative about our journeys, our failures, triumphs, losses, our gains; everything important to us is embodied in whakapapa.

“I happened to be in the right place at the right time. As a child, I tagged on the coattails of the elders’ oratory on the marae.

“It is not incidental that I grew up in that world of sitting among the arts inside the meeting house absorbed in the wairua of all those things, in an ocean of words. And it’s not accidental.

“It’s part of what we are as traditional and contemporary Māori society.” 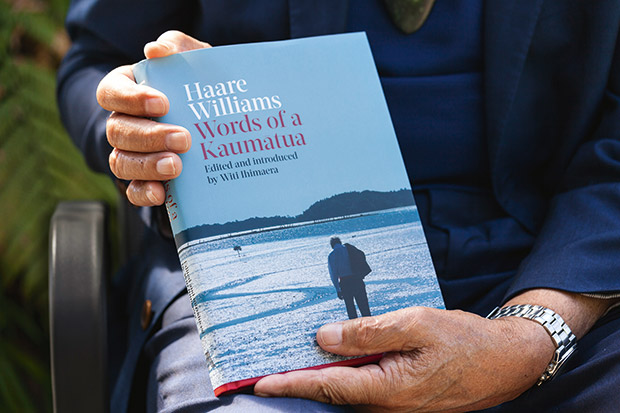 Celebrated storyteller Witi Ihimaera agrees and says Haare has “the wisdom of a Māori elder of the old school. And how fortunate we are to hear his songs in a life where — like the kōpara — he, too, has often had to beat against the storm.”

More stories you might like:
Welcome to Rockwood: A glamping retreat and train carriage are the newest arrivals to this high-country station

WHAT ARE YOUR MOST SIGNIFICANT ROLES?

Dean of Māori Education, Auckland Unitec. Gained an honorary doctorate in 2017. “Being a teacher is the noblest mission, a taonga one is privileged to take on; to make learning endemic so that every kid will want it. Teaching and learning empower everyone. Good teachers take us into wilder spaces inside our imagination. They give our kids the Maui (mythological god) magic that allows them inner strength.

“There comes a time when a child is born. Lying on the earth floor and a speck of light peaks through the raupō thatch and shines on the child and says to the child ‘my child, you are never born to fail’.”

Haare began his broadcasting career with the Broadcasting Corporation’s Te Reo Unit, then became general manager of Aotearoa Radio and established a joint venture with the South Seas Film and Television School to train te reo speakers as producers and operators in film and television.

The arts and history

In the Kirk government of the early 1970s, Haare and politician Matiu Rata helped initiate the Treaty of Waitangi Tribunal process, and Haare has subsequently assisted with research for the tribunal. He co-founded Ngā Puna Waihanga (the New Zealand Māori Artists and Writers Association) and was its president for five years as well as being a regular contributor to Mātariki exhibitions and poetry readings.