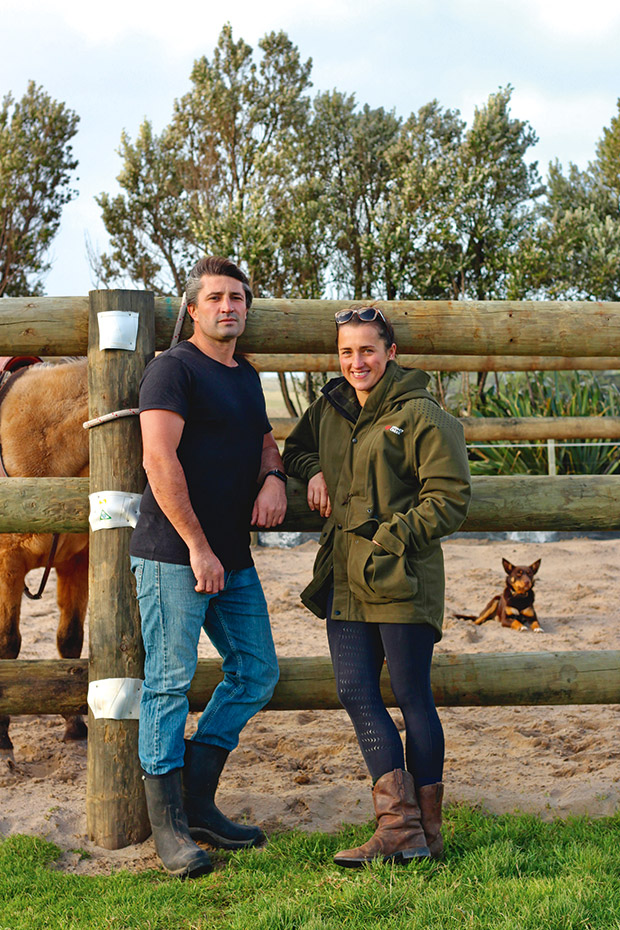 The term fishmonger has existed in old English since the 12th century. Etymologists argue about whether its roots are in Old Greek or Old Latin, but they generally agree that it refers to someone who buys and sells fresh fish.

It feels like an old-fashioned way to describe a thoroughly modern business operator, but Delwyn Tuanui reckons it’s the best fit for what he does with The Chatham Island Food Co.

“It’s a term that’s been around for a long time, but that’s what I do. We buy fish from fishermen and turn it into something beautiful. We’re making great, authentic kai moana accessible.”

The fact that he and his wife Gigi, plus their 25-strong team, do all this from Aotearoa’s most isolated inhabited island makes it remarkable. But what’s even more impressive is that the pair can now add “Supreme Champions” to their respective business cards. “It must be quite a challenge to build a New Zealand business from the Chathams, but they have successfully done this. Their pure pāua is what I would call a pure indigenous product, unique to Aotearoa, certainly capturing the flavour of our beautiful islands. The company’s innovative approach to making delicious pāua pies is exciting.”

So how does a relatively young business based 800 kilometres from mainland Aotearoa scoop the pool in this way? Delwyn says their isolation is what makes them unique in various ways.

“The Chathams are subantarctic, so the water is particularly cold. It’s equally important to understand that our ocean floor, and the ocean around the island, are really clean. It’s utterly different from the east coasts of the lower North Island and the South Island, where huge rivers carry lots of silt and mud.

“We’re an in-shore fishing business, and we only use day boats that fish off our local reefs and catch in-shore species that feed off our coast. When you’re a small family business, you’re grassroots. We’re very hands-on.”

Sustainability is key: everything the boats catch is line-caught or hand-gathered by freedivers. Blue cod, grown sweet and rich on a diet of baby pāua and rock lobsters, are caught in large mesh cages that enable smaller fish to swim through, so there’s very little by-catch.

Divers report on the islands’ pāua population, ensuring no one area is over-fished. While the pāua mince is made from pure pāua meat, nothing is wasted: guts and organs are used for blue cod bait or to fertilize vegetable gardens for staff who live on-site.

Delwyn, a seventh-generation Chatham Islander, has been fishing since he was a kid. The family farm he grew up on includes 12 kilometres of coastline — in parts, it’s possible to get pāua in your gumboots at low tide. 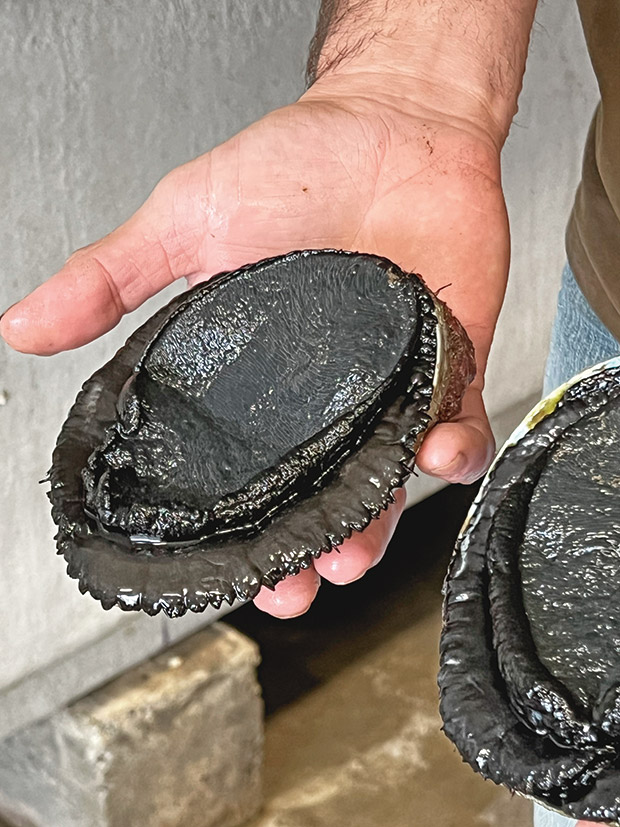 “I have a passion for diving, and that whole process of hunter-gathering is pretty strongly imprinted on who I am,” he says.

If it hadn’t been for the global financial crisis — and the revelation that it cost more to send livestock to market than they were getting in return — Delwyn might have continued as a farmer. But a desire to make a difference in how the rest of the world saw Chatham Island produce spurred him to follow another path.

“We have this amazing food growing region, but we need to work out how to lift the value of what we produce and tell our story.”

Heading to Melbourne to study agri-business in 2014 proved to be transformative in more ways than one. He fell in love with Gigi, a fellow student, and started importing blue cod from home to sell at Melbourne’s finest restaurants.

But they could only do so much from afar, so when Gigi was seven months pregnant with their first son, they moved back to the Chathams and took over a rundown fish factory. Reality hit hard.

“We went from dealing with 200 kilos of fish to 10 tonnes. We had no idea. At first, we thought, ‘Right, we just have to move it’, but we knew we wanted to do more. When you’re a traditional Chatham Island business operating through distributors, your story gets lost in the dynamics of the food industry, and there’s a real disconnect.”

When the pandemic hit, and their traditional market disappeared almost instantly, the Tuanuis realized they had an opportunity to get the message out there. Rather than despair, they switched their model to focus on selling online.

Customers fell in love with it “overnight”, Delwyn says. “It was insane how fast it grew.” They’ve been running the business online ever since, sending frozen blue cod, pāua products, kina and crayfish everywhere from Northland to Stewart Island. Being able to transport delicate goods such long distances with no loss of quality comes down to attention to detail, Delwyn says. 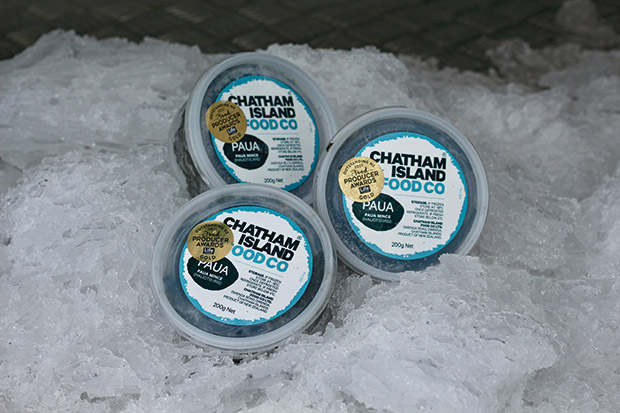 “Everyone comments about how fresh and sweet our fish is, and a big part of is how we manage the supply chain.”

That’s paid off in other important ways. Delwyn says that lifting the production quality of Chatham Island seafood exports has enabled price increases that turn into profits, which are directly and indirectly fed back into the Chatham community.

“A big part of our journey has been creating a brand and lifting the value of our product so we can put so much more into our community. Our vision has always been about a better future for the islands as a whole.”

While Delwyn’s a dedicated champion for the Chathams, he’s also quick to admit that running a business is hard work. “There are some great advantages, but the cost of doing things here is horrifically high. The freight and energy costs mean that living costs here are four or five times higher than in New Zealand, which means we must be smart about what we do.”

That ethos also extends to life outside work, he says. “For Gigi and me, balance is key. We returned to the Chathams because we wanted to make sure our kids have a beautiful upbringing. We’re busy, but I don’t work on the weekends; I’ve got time to go hunting and fishing. We have a lot of cool stuff going on.”

Chatham Island Food Co Pāua Pies, made in collaboration with West Coast Pies in Westport, have been a smash hit since launching in November 2021. The success is particularly pleasing for Delwyn and Gigi, who had long dreamed of creating a pie with pāua.

“We wanted to make the best pāua pie in New Zealand, and we’d had the idea for ages, but we already had three little kids, 25 staff and 30 fishing boats to be looking after. We didn’t have time to make pies,” Delwyn says.

The idea went on ice until Gigi met Emily Lucas of West Coast Pies at the 2021 Auckland Food Show. “The pie idea wasn’t really going anywhere, but then we met Emily, and we just clicked. The West Coast and the Chathams are both so remote, it just felt right. We’re a magic mix.”

Emily sent some test pies to the Tuanuis in November 2021. “We got the family round to try them, and we knew we were on to something.” “The pies are great because everyone can understand them,” Delwyn says. “They’re so Kiwiana; they’re not snobby, they’re fun. Emily’s really creative, so this is just the beginning.”

Producers of the country’s finest boutique foods put their best offerings before a panel of sharp-toothed judges looking for the most delicious in each category. Buying products displaying an ONZFPA medal logo is a guarantee of New Zealand-made quality and enjoyment.