Six months’ volunteering abroad inspired a 24-year-old Wellingtonian to look for a sustainable and economical solution to a worldwide problem – and to implement back home.

When her first year of religious studies and chemistry at Otago University left then 19-year-old Olie Body burned out, she joined Lattitude Global Volunteering to teach in a tiny village in the foothills of the Himalayas for six months. Before departing for India, Olie was shocked to learn that many girls in the area often left school because they lacked access to menstrual products. So she took with her a large number of reusable pads (made by the non-profit Days For Girls).

“There were tears when the girls in my village realized what those beautifully sewn kits of soft-flannel, washable and reusable underwear liners meant to them and enabled them to do. Without access to menstrual products, many girls’ options are to use rags, cardboard or dried leaves or nothing.”

International charity Days for Girls estimates that 113 million girls in India miss school every month because they don’t have menstrual products, and others drop out. While this opened Olie’s eyes to the effects of period poverty in India, on her return to New Zealand (beginning a communications degree at Massey University Wellington), she realized it is also happening here.

The regular distribution of free condoms on campus made her think: “Hang on. Why isn’t there a bowl of menstrual products next to those? Sex is a choice, but having a period isn’t.” She surveyed 1000 of Wellington’s female university students and found one-third had missed classes because they didn’t have access to menstrual products.

In addition to the high monetary cost, Olie was concerned at the environmental impact of the 357 million tampons and pads heading to local landfills each year. “Every disposable costs money to produce, costs the user to purchase, lasts four to eight hours and ends up at the landfill where they don’t decompose for up to 500 years. This model just doesn’t make sense.” Initially, Olie tried to get subsidies for students’ tampons and pads (estimated to cost $80 to $300 per woman each year).

In her research, she discovered an alternative — a menstrual cup. The version Olie and Wā Collective manufacturers have developed, called the Wā Cup, is worn internally and produced from medical-grade silicone. It is ethically made, zero-waste produced (there are no byproducts after creation), has complete material traceability and lasts for about 10 years.

Over its lifetime, it will save its user about $2000 and prevent 2500 disposables from going to landfill. The Wā Cup’s packaging is New Zealand-designed and sourced and is compostable. The cup, which went through 15 design iterations, is manufactured in the United States. Olie works through concerns they might be difficult to use. “It’s bloody simple really. The cup folds to the same size as a tampon, pops right in and holds three times more than a tampon or pad. They are effective for 12 hours. Chances are you won’t even need to interact with your period during your day.” 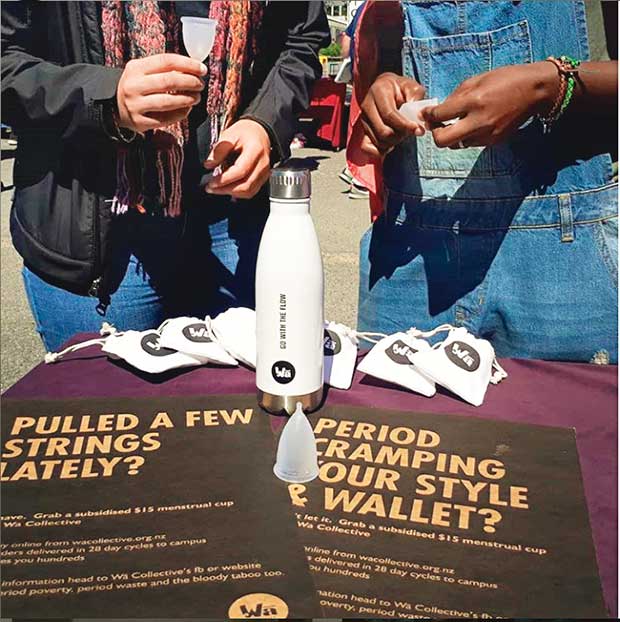 A 2011 study (reported in Canadian Family Physician) showed 91 per cent of women who trialed cups continued to use and recommended them.

However, at $50 to $80 each, a cup can be too expensive for most students. The Wā Collective was born as a social enterprise to help subsidize students into a cup. “It is an operation with the heart of a charity, but the mind of a business,” says Olie. “Profits go into delivering environmental and social good – subsidized cups for those in need.” Non-students buying the Wā Cups pay $49, students $15. Nine university student associations and two health collectives distribute the subsidised cups nationwide.

Olie, a farm girl from Canterbury, graduated last year and now is running Wā full-time with five volunteers. “I never expected that my passion project would turn into running my own social enterprise so soon.” In May 2017 the business was officially registered and, after just eight months of fully fledged operation, has sold enough cups to prevent 530,000 disposable products from entering landfills and in the next year will save users a combined $180,000.

Wā Collective has been nominated as a finalist in the Sustainable Business Awards, as a Deloitte Fast 50 Rising Star and Olie has also been nominated as a Social Change finalist in the MissFQ 2018 Influencer Awards. “To be recognized for both key aspects of what we’re doing in such a short space of time is humbling.” Wā Collective is presenting to intermediate and secondary schools next. “If we can normalize cups for our next generation, behavioural change can happen. Then we have a sustainable solution that tackles period poverty and the needless waste created by disposables, period.”

There’s nothing new about menstrual cups. They were first patented in the 1930s by American movie actress Leona Chalmers who wanted to avoid wearing bulky, and obvious pads when working in white, body-hugging dresses. However, a wartime rubber shortage meant they were never manufactured.

To find out more, or to join the Wā Collective movement, visit wacollective.org.nz or help Days for Girls New Zealand by donating here.