Polly declares that fortune favours those who follow winding dirt roads over sun-scorched hills and people who keep abreast of their moles.

I visited the doctor to get the moles on my forehead examined. She, however, was more interested in the blot on my leg.

‘That old thing?’ I was dismissive. ‘It’s been there for at least a decade.’

The skin specialist she referred me to listened as I explained my history. A carcinoma had been removed from my face a few years earlier and I was uneasy about a few new spots.

Surveying my head through his special machine, he said there was nothing to worry about. For this year, at least.

As for the mole on my leg? His expression was sombre as he looked up from his lens.

‘This meets the requirements for instant removal.’

I was limping slightly when James picked me up from Whangarei Hospital; stitches tugging on my calf where a scoop of flesh had been subtracted. When asked how I felt, I considered the question.

The sky seemed extra blue on that hot summer day; the sunlight especially golden. Queuing in a café, I felt great warmth for the people bustling past. Nothing was taken for granted. Life is so much sweeter following a reminder that our world can be tipped upside down in an instant; when we remember the way Death hovers constantly in the wings.

Back at home, I proselytised with born-again fervour for family and friends to check their moles. 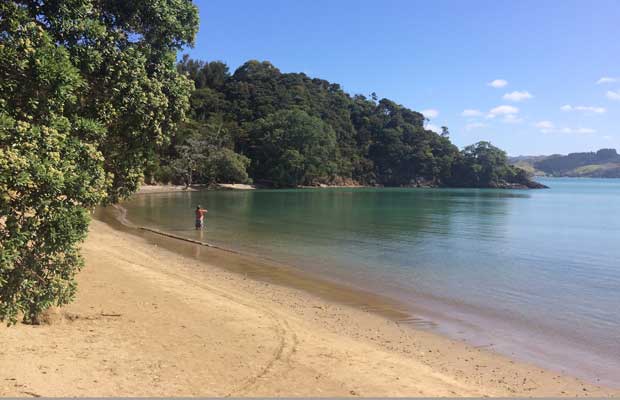 The feeling of providence has been further extended by a family camping trip to a quiet Northland bay where pohutukawa-smothered headlands cup the green, silken water, and native bush covers surrounding hills. A single, raggedy line of tents and caravans follow the arc of the beach.

Ours is a friendly little village. There are fresh fillets from the fisherman who kayaks out at dawn to flick his rod into the rising sun. The children are a tribe, roaming between campsites to sample the games and wares on offer before disappearing into the harakeke or traipsing onto the rocks to chip at oysters for waiting birds. We swap stories with neighbours, exclaim over clever camping gadgetry and flop from the shade into the sea and back to our books.

For stimulation, there’s a hike to the other side of the peninsula where the surging Pacific slams into rugged rocks. At night the sea is as black as the sky and dazzles with fallen starlight as bioluminescence glints silver. We fall asleep to shushing waves and the whistling cries of nearby kiwi and wonder why we don’t pare back our lives to do this kind of living more often; here where time is the slow rise and fall of the tide.

The name of our campground isn’t for general sharing. At Christmas when we drove down south, James and I rued how crowded our country seemed. This place isn’t on the itinerary of the campervan convoys and remains off the list of those with big motor boats. The friends who’ve joined us to camp here agree about keeping it quiet.
We make our own luck by being proactive. Fortune favours not only the bold but also those who follow winding dirt roads over sun-scorched hills and people who keep abreast of their moles.