A big-city visit causes Polly to question the family’s isolated lifestyle – if only for a moment.

We went to Auckland for a week of bright lights and bustle – an education in cinemas, public transport, galleries, malls and various other metropolitan experiences for bumpkin kids.

It was a busy itinerary — a sensory banquet to offspring who can go weeks without stepping on asphalt. After a 10-minute train ride to downtown from suburbia, five-year-old Zendo asked if we’d arrived in a different country.

He had never viewed the sky through a concrete jungle before.

“Is this the world?” His grip tightened at Queen Street’s heaving mass of pedestrians.

Within days, he was pining for home, but eight-year-old Vita declared love for urban spaces, captivated by escalators and big-population plenitude. But when we passed huge old trees growing below the museum, both kids embraced them with such spontaneous enthusiasm, I thought of tourists recognizing compatriots in a foreign land.

“Isn’t it dull in the bush? Don’t you miss the city?” A friend, catching up during our week away, examined photos of our home set in its rugged wilderness. Isolation can be duplicitous. One moment I’m marveling at the richness of forest solitude, soaking up silence like I’m porous, feeling my soul expand. When I picture the city’s crowded land submerged beneath concrete, I revel in the seclusion of our remote valley. But sooner or later, like an insidious rat sidling in, a faint dissatisfaction gnaws at my well-being.

Around me, the ranges close in like walls. The stillness feels tomb-like; the outside world is as distant as the moon. Then I yearn for busy pavements, café clatter and encounters with warm, alive humans.

Knowing when to get out is a balancing act, but I don’t feel the need to escape like I used to. The forest has taught me to find wonder in ordinary life. Time holds a steady and knowable pattern — the swelling and bursting of buds, the green, juice-fresh leaves gradually fading and falling. The language of cyclical rhythms says there’s magic in the mundane.

We built our house from summer mud that dried slowly, brick by brick. We’ve mulched the soil, sowed seeds, bit into fruit that squirted out freshly picked flavour and spent nights on our backs gazing up at the stars. Like screws, we’ve turned deeper into the land with each rotation of the seasonal wheel.

It was a six-hour journey home from Auckland. We arrived at night, in a storm, to the sight of a fallen tree blocking the track. While James jogged ahead to fetch the chainsaw, the kids and I clambered through foliage and trekked uphill, feeling our way in the darkness and gasping like swimmers through the pouring rain.

As the forest bent and creaked in a gale, we laughed like wind-whipped lunatics. 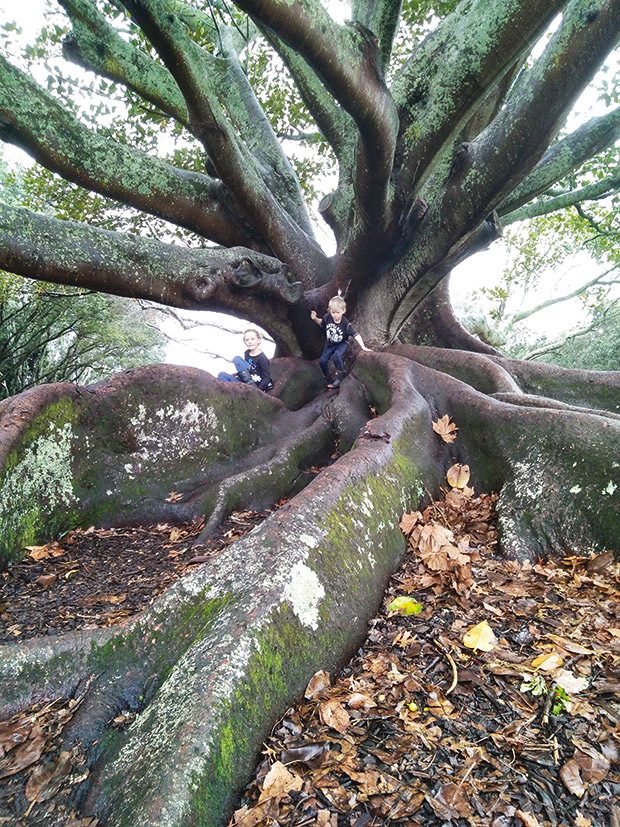 That kind of aliveness isn’t easily felt when night-skies glow dully orange. The exhilaration from being trapped in by rising streams isn’t knowable to someone surrounded by sealed roads and drains. Living close to the elements brings a sense of adventure.

Now summer is coming, and we’re high on sunshine and rising sap. I love this time best of all. Heralded by shining cuckoos, the fledgeling season is infused with possibility and promise. Months of laidback living seem certain. Who cares if the washing isn’t hung on the line until 2pm? By 6pm it is dry. Campgrounds beckon; and beach days, picnics and river swims loom. A thousand plans are planted.

In this climate, dreams are fertile and easily sown. Emerged from winter’s contraction, James and I scheme in the long lilac evenings, stirred to a second life. This summer, we’re building a courtyard, sauna and additional herb beds. Less enthusiastically, we add chopping firewood, clearing culverts and mending the driveway to our list.

When my city friend emails with plans to visit, I consider assigning her tasks so she’s too busy ever to feel bored. But I think you need to stop to see the gold. People who have found it gleaming through the quietness never really regard the countryside as dull.