Polly Greeks has a run-in with a good rooster gone bad.

The laughter was pure schadenfreude. Bubbling mirthfully, the children retold the tale of Black Spot’s attack to anyone they could corner. “Mum’s screams were so loud I honestly thought there was a monster,’” 10-year-old Vita chortled.

For the record, aggressive barred rock roosters are monsters. Even when placid, they’re large. Get them angry, and they swell to twice their size — a whirling dervish of feathered fury and springing, scything claws.

“He drew real blood.” Seven-year-old Zendo, a scab enthusiast, described my lacerations with relish.  He eventually rescued me, lobbing a stick with extraordinary precision and clocking Black Spot on the head.

He bought me just enough time to bolt for the gate of the chicken run. If the kids delighted in my trauma, it was karma. Long before Black Spot assaulted me, they’d claimed the roosters were terrorizing them.

“You just need to show them who’s boss,” I replied briskly, shooing reluctant off-spring back down to the chook run with the scrap bucket. Not even when a visiting child, howling tearfully, needed plucking from the chicken run fence, did I really believe the roosters had turned malicious. 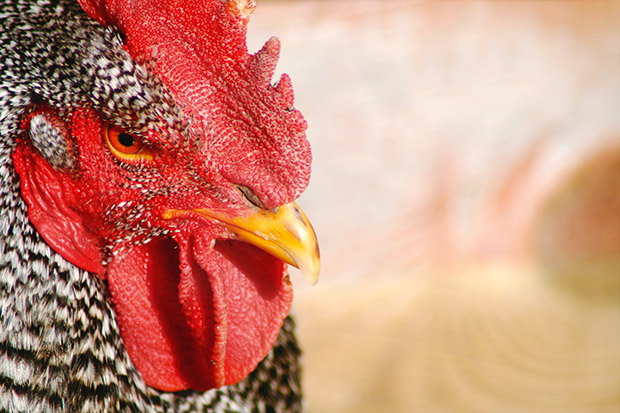 Those sweet, feathered friends we’d raised from fluff? Impossible! Admittedly, upon viewing the maturing males hectoring the hens, I conceded it was time to dispatch some to the great perch in the sky, but I still stepped fearlessly among them. And then I learned for myself that good roosters could indeed go bad.

In a court of law, it could be argued the bird acted in self-defence. The attack seemed unprovoked but let’s not forget the poor fellow had witnessed five of his seven brothers get picked off amid carnivorous calls for roast. We only needed one rooster for our new flock, and Black Spot wasn’t guaranteed the job.

The pressure of a proverbial axe dangling over one’s neck could well make one lash out at a captor. The chook run was larger than some people’s gardens, but ultimately, our flock wasn’t free, and we know the awful strain of controlled confinement.

All the same, he was guilty of grievous bodily harm, and I nodded righteous agreement when husband James reached for his rifle. Down at the run, however, we hit a problem. Black Spot, so-called because of the large black spot on his comb, had mysteriously shed his mark. Three identical roosters eyed us expressionlessly.

“Go in there and see which one attacks,” James urged. Nervously, I shuffled in, exhaling relief when nothing happened.  “Aah well, you’ll identify him next time,” James consoled, turning me pale. I grew stealthy, tiptoeing into the run each day armed with a mop. 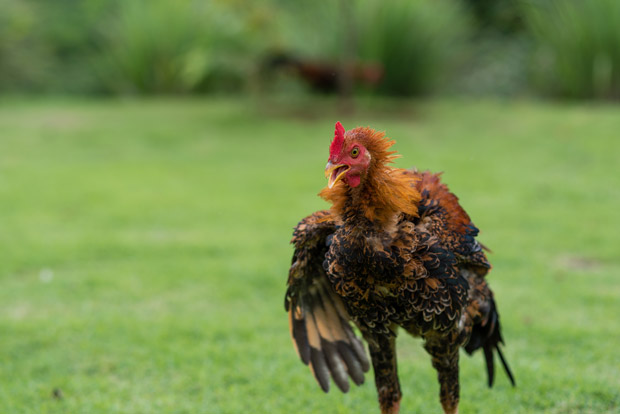 Loading the feeder, I kept my weapon trained on sudden movements. The random attacks, so frightening for me, were a spectator sport for Zen, who kept his ears pricked for the screams that signalled action. Appearing beyond the fence, he called encouragement and advice as, mop swinging, I fought my way past the lunging bird. In the furore, I never managed to distinguish my attacker.

In desperation, I added a bottle of food dye to my arsenal, and the rooster was finally marked during a battle some tense weeks later. Tough in life, he was even tougher in death, and the meat-eaters of the house didn’t enjoy him.

“The guinea pigs could make a satisfactory emergency meal, though,” James murmured thoughtfully as he watched the children with their new pets. A survivalist at heart, he often assesses newcomers on their edibility.

For now, however, the only danger facing Flossie and Ruby is vigorously prodding childish love. “Serves you right,” I sniggered unkindly the other day as Zen nursed bitten fingers.

Déjà vu stopped my schadenfreude short. Can good guinea pigs go bad? Is captivity keeping them safe or generating a fight for freedom? For now, my mop lies still, but time will tell if it’s needed.