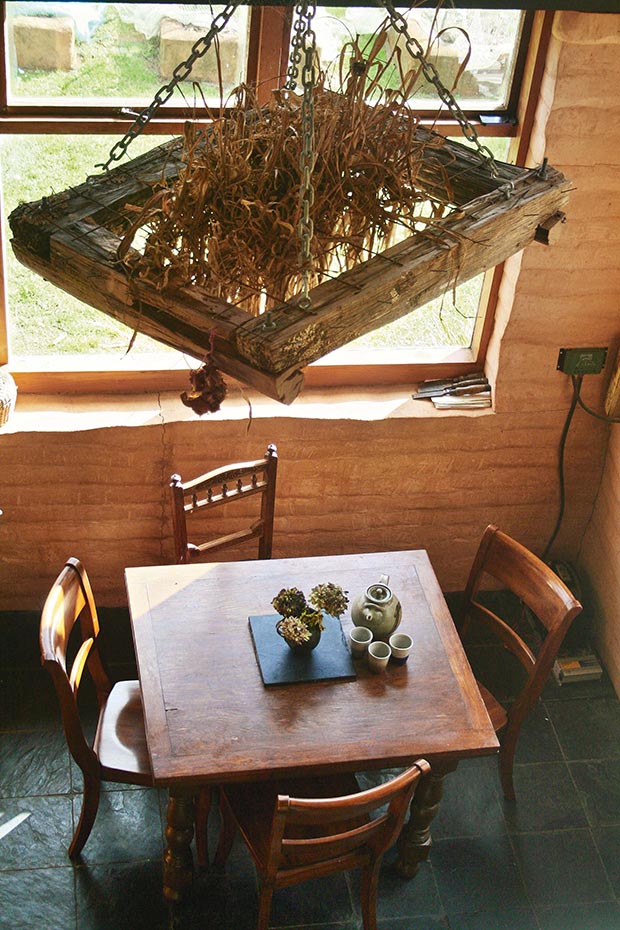 Garlic suspended above the dining table

The children are fascinated by the sight of inky falling insects, while a spot of foraging nearly sends James to meet his maker.

Long before James and I arrived to stake our claim in the Far North, the block of land adjacent to ours was occupied by a tree whisperer of perma-cultural inclinations who set about coaxing a subtropical food forest to sprout from a large portion of the once-farmed hillside.

Eventually moved on by an unimpressed absentee landowner, he’s since departed for foreign shores but while his abandoned shack by the stream grows more tumbledown with every season, his legacy of fruiting plants continues to grow – a dense tangle of pineapples, pawpaws, peaches, cherimoyas, macadamias, sapotes, tamarillos, guavas, loquats, figs and bananas all engaged in silent, slow-motion combat as they compete with self-sown natives for space and light.

Since no one lives on the land and we must pass through on the way to our place, we’ve come to see the food forest as an extension of our fruit bowl, and join the foraging possums and rats in munching on random bounty when we find it. Not everything is as good as it looks. Through trial and error, we’ve learnt the pineapples are disappointingly decorative, the bananas turn tongues furry and the pawpaws have a peculiar enzyme that shrink-wraps lips over teeth for an hour or so following consumption. 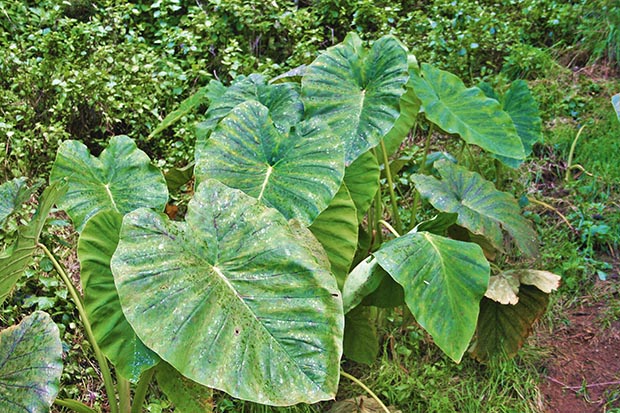 Host to legendary summer festivals and an ideology of freedom, our gardening predecessor had hoped to exist self-sufficiently from his living pantry and added taro to his inventory, planting it along the stream before his eviction. Since discovering how to cook it, James has embraced this root crop and likes to fry it up for a monthly meal. When we found an enormous taro plant growing deep in the forest, he harvested from it with relish, assuming it was part of the gardener’s stockpile.

Boiled for some hours, fried with turmeric and accompanied by a coconut milk sauce, it was served at the outdoor table where James, filled with hungry anticipation, took the first forkful. When he got up a moment later, clawing at his mouth, we thought he was being comically theatrical. Even when he fell to the lawn, making a noise not dissimilar to an emptying bath, we were slow to cotton on.

Finally, a visiting friend thought to enquire if James was okay. In short, he wasn’t. And when the sensation of swallowed broken glass had eventually diminished and his airways opened again, he affirmed via Google that some taro varieties can be very poisonous indeed.

Meanwhile, our family was gaining nourishment from an unexpected, homegrown source. After harvesting our garlic, James had whipped up a drying rack fashioned from old totara fence posts he’d discovered on the land. We hung the garlic in bunches from it and suspended the rack over the dining table, contemplating with pride the bucolic scene dangling over our heads whenever we dined.

But while we were gazing upwards, the children were peering into their bowls, puzzled by the minute black specks appearing. “They’re moving, mum,” five-year-old Vita exclaimed. Scrutiny proved her to be correct. Tiny black aphids were raining down silently from the garlic in a gentle, almost continual shower.

For 10 days they fell on the table, into the food, and onto Zen’s snowy white hair. “Good, Mama?” he asked suspiciously at every meal as he surveyed the tiny creatures waving microscopic legs from atop his spoon. “Yes,” I told him firmly. It was protein after all.

To the tune of Prince’s song, James and I sang Aphid Rain to ease any childish hesitation, resembling a deranged version of the von Trapp family as we broke into chorus at every meal. Not that everyone needed encouraging. Having discovered the bugs left stains like blackberry juice if squashed, Vita, notoriously picky at mealtimes, concluded they were indeed edible and was surprisingly acquiescent about chewing them up.

But like the rest of the family, she never inquired about further helpings when the insect population above finally perished.