Training young minds to think creatively is the best schooling possible – and Polly leaves no stone (or leaf) unturned in her mission.

Northern Iraq would be an adventure. That’s how I sold it to James, a long time before we put down roots in Northland. The online advert invited readers to “help rebuild a war-torn nation”. Further inquiry revealed English teachers were being sought in the autonomous region of Kurdistan.

Googling Kurdish mountains had provided enough imagery to conclude we’d be teaching bright-eyed urchins in some remote stone village where bleating goats wandered beneath thrusting crags. Instead, we were escorted from the airport to a patrolled compound where armed guards swept us for bombs before opening steel gates to a sterile box apartment.

This, then, was the way home for James and me. Armed guards at frequent roadblocks, landmines in the hills, and beige tanks rumbling through sun-scorched, dusty landscapes set us on the path to a far-off stand of New Zealand forest. The school in the mountains of Kurdistan where Polly taught.

During our year in Iraq, a secluded green valley became increasingly synonymous with freedom.

That Kurdish school steered me onto home-schooling’s road.

It was a multi-million-dollar construction into which a thousand kids trudged each day.

Although it was my first time teaching, inexperience didn’t matter according to the principal. Every bit of schoolwork was prescribed, point-by-point. As teachers, all we had to do was front up to class and deliver the material in the correct way.

The students would suck up the information, pass their weekly exams and rise to ever loftier heights of academia. Obstacles such as dyslexia didn’t exist if you followed the programme, we were told.

To enforce control, we were issued a sheet of 49 punishable classroom offences called infractions, coded for easy reference. Under our tutelage children weren’t to smile, laugh, silently snigger, whisper or scrape their chair.

They mustn’t stand up or talk unless invited to. Even if the potential perpetrators were sitting as still as statues, we could get them for failing to look in the right direction.

It felt like a factory, mass-producing human units of standardized data. Standing at the blackboard, I saw any passion for learning fade like light in my pupils’ eyes as monotone textbooks dictated each lesson’s course.

We all gazed longingly out the windows and no one in my class was punished for doing so. As far as I was concerned, distant horizons were the right place to be turning one’s eyes.

Einstein said, “Education is not the learning of facts, but the training of the mind to think.” A thinking mind is one that’s in movement – able to leap lightly across shifting truths, venture into unknown realms, torpedo down wormholes of curiosity and explore currents that arise when you let yourself drift. 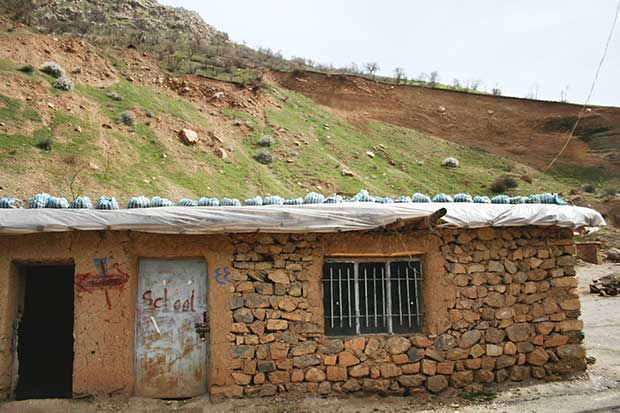 Like animals in captivity, the Kurdish children’s abilities to explore their interests and expand their imaginations were tightly confined – not just by the school’s concrete walls but by a rigid curriculum and a narrow definition of success.

Home schooling six-year-old Vita feels like an antidote to the clockwork institution we taught at. Instead of a syllabus, we’re following her interests and awareness and just because they’ve led us into fairies, flowers and a fascination with detectives doesn’t mean literacy and numeracy aren’t getting practised.

Education’s root word is educare – to draw out or bring forth; not to load up. I believe it’s also my job as an educator to stoke the fire of curiosity so Vita and three-year-old Zen never stop wanting to know why, and how and if it is possible. Taking responsibility for a child’s education can be daunting.

I worried at first that I might be depriving Vita of social skills but she has friends young and old. She’s not disconnected from the world; it’s her classroom and in it, she’s learning constantly from experience, not theory.

It costs us to home-school, both in time and lost income, but it pays handsomely too. It’s true I sometimes yearn for a day away from the kids, but watching them unfold their world is gold. Engaging them with nature and turning on lights in their heads has become a passion.

That I’m learning too, all the time, is such an unexpected bonus.