Polly Greeks’ Blog: The fine print of the parenting contract


Polly plays doctor after four-year-old Zen’s latest misadventure — an unfortunate incident with a packet of crayons and a staple.

Is it ever okay to serve vodka to children?

This was my question the other Saturday. Perched on the table before me, four-year-old Zendo was shrieking like a relentless car alarm and holding his left hand aloft. A plastic clamshell of crayons dangled peculiarly from a finger. Unbelievably, my son had somehow succeeded in stapling himself to the packet. Seven-year-old Vita had fled the scene, taking refuge in the bunny run where I could see her crouching; eyes shut and fingers wedged in her ears to block the high-pitched screams. My instinct was to join her but alas! As the sole adult on the scene, the injury was my responsibility. 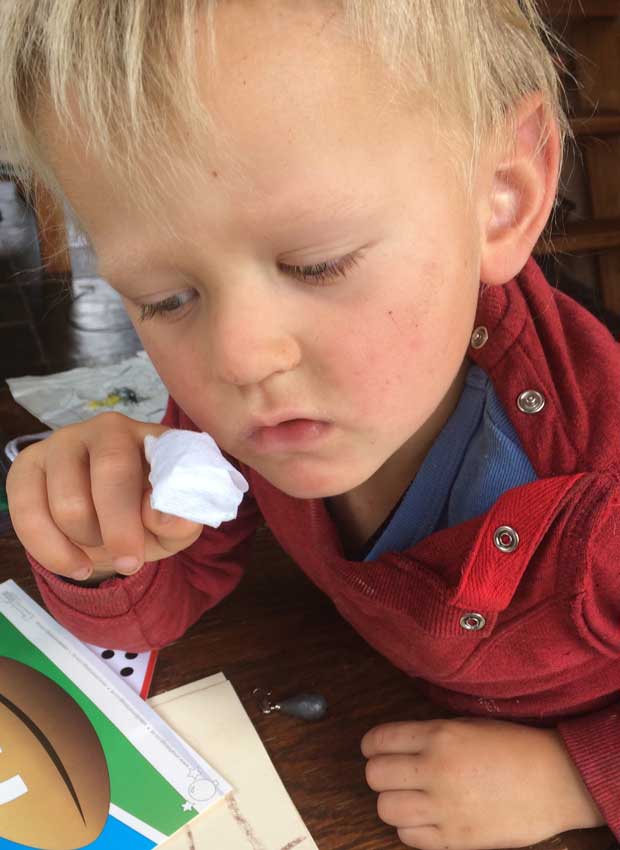 These sorts of moments are submerged in the fine print of the parenting contract. Like one of those interminable ‘terms and conditions’ documents that stands between you and new digital gadgetry, nobody ever reads all the thousands of future commitments stacked into the deal when they sign up for a baby. Only later, confronted with spilled body fluids, breakdowns and other malfunctions does one start to realise the grisly extent of parental obligations. As someone who finds even cooked meat repugnant, it’s fair to say bloodied flesh isn’t my forte. Sometimes I’ve had to work hard not to faint.

I’m good at telling imaginary stories but Zen wasn’t in the mood for a make-believe tale. ‘It hurts like Billy-O,’ he howled rather endearingly as I inhaled deeply and prepared to inspect the wound. ‘It hurts more than Billy-O,’ he screamed a moment later when I gave the crayon packet a tentative tug. Not only was the staple half-buried in his finger, but its end had hooked round so it wouldn’t slide out. If we lived closer, I’d have whizzed him into Kaitaia Hospital’s emergency department but given the circumstances, an hour’s drive along twisting gravel roads seemed like prolonged torture for everyone involved.

In the olden days, kitchen-table surgery must’ve been standard practise for people in the back blocks. Alcohol was their anaesthetic. Channelling my inner pioneer, I contemplated whether vodka would aid our situation as Zendo’s siren wailed. A comatose patient seemed pretty appealing but a long afternoon with a hung-over four-year-old didn’t.

Instead I fetched wire-cutters, pliers and my coveted phone. Bribed with a rare moment of phone possession, Zendo eventually allowed me to cut the staple in half so we could ditch the crayons. Then I gripped the protruding metal nub and pulled. And pulled. Amid furious, urgent roars, the staple slowly emerged like a reluctant worm being tugged from the earth by a beak. Outside the window, Vita sobbed in empathy. ‘It’s out, it’s out,’ I finally cried.

There it lay on the table; another small chapter in Zen’s stories of misadventure.‘I’m with you through thick and thin’, it seemed to symbolise as I bandaged up my son. ‘We’re in this together.’ What an extraordinary intimacy this parenting business provides. You give and you give to these little people before you and in return they dish up their joys and terrors, their rages and triumphs, their wonder and uncensored expression, the push/pull of their needs and growing independence.

Nobody pushes buttons as deeply and precisely as children can. Shiny bright with newness, they reflect with dazzling alacrity. Like pocket-sized mirrors they flash you glimpses of your own childhood; the parenting you received; the sort of person you’re being. When you get the child-rearing right, the ride is as fluid as the hawk’s soaring over the valley, delivering you into golden moments of spontaneity and laugh-aloud pleasure; victorious whoops as you skilfully navigate turbulence; closeness as heart-warming as the sun. Get it wrong and you’re delivered up against the tangled mess of your own shortcomings. Nothing reveals who you are to yourself the way parenting does.

‘Mum,’ Vita intercepts me by the washing machine. ‘You know the way people get their favourite animals stuffed when they die so they can still be with them? Well if anything happens to Momo, can we get that done to her? We could keep her on the couch so I can sit by her.’ My daughter is referring to her grandmother. I try to keep my face straight. Children give gifts of the unexpected. Their perceptions carry logic. If we want them to deliver the world from its current disarray, we’d do well to hear their voices.

As Christmas approaches, both Vita and Zendo can be heard occasionally pondering what to give me and James. I love that in their eyes a yellow leaf or a long bendy stick is regarded as treasure. As a back-up, I’ve trained them both to give decent neck and shoulder massages, but the real gifts, of course, are simply themselves.