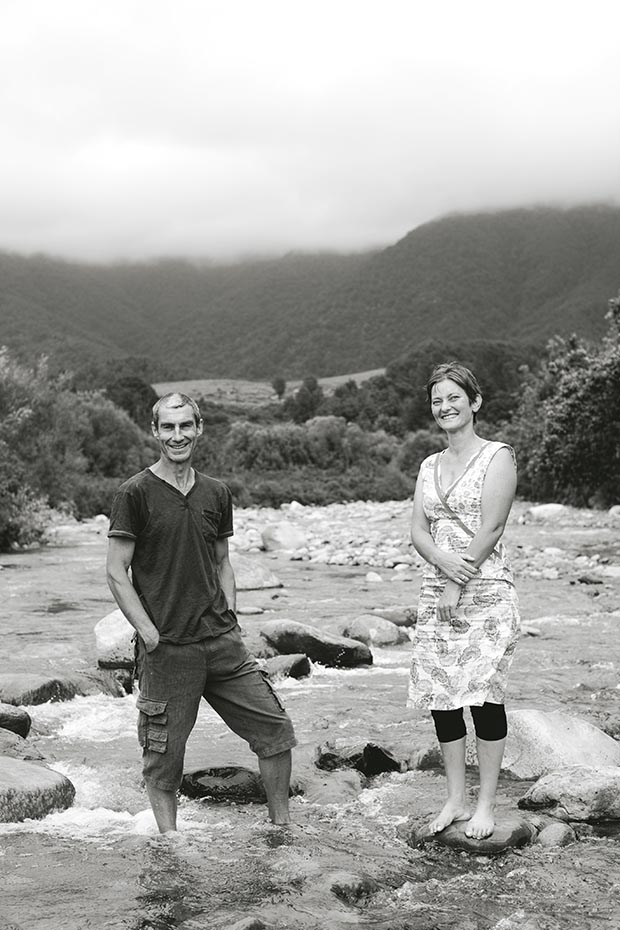 A couple’s wish list read: their own land, a self-sustainable lifestyle and a business that reflected their personal values.  After a bright idea and lots of hard work, that list has become a blueprint for the Blue Earth range of body products

A cocktail of aromas emanates from Renee Boe and Warren Bryson’s workplace. There’s the tang of lemon grass, the woody sweetness of cinnamon, echoes of rose and lavender and a hint of patchouli. Inside, the mingling scents could cause a sensitive soul to swoon. It’s as well the couple lives in the country, just outside Staveley at the foot of the Southern Alps. Who knows what effects these intoxicating aromas might have on a denser urban population? 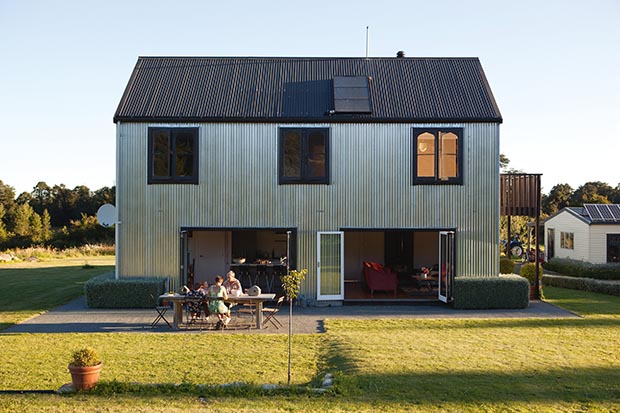 The house that Warren and Renee built.

Few workplaces smell as good. But that’s what happens during the creative and practical business of making Blue Earth – a soap, skin-care and body-products business with a twist.

Because Renee and Warren lead a predominantly vegan lifestyle, the business had to be run on the same principles. (They use organic beeswax in some of their products and eat honey from their hives so they are not strictly vegan.)

Blue Earth had to encompass their values of quality, integrity and respect, not because the market requires it but because this is how the couple aims to live every aspect of their life. 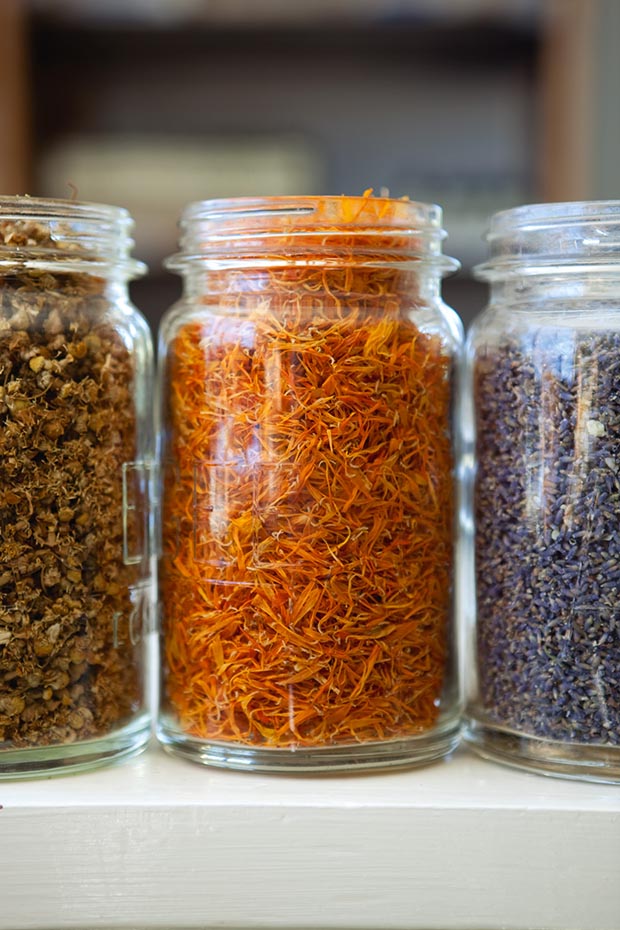 In less than 12 years Blue Earth has grown from a rudimentary idea to a business which supports the couple and their family plus members of both their extended families.

They are truly living their dream. That dream was the product of a fevered and, in the case of Renee, possibly a feverish imagination while they were living and working in London. She was suffering an allergic reaction to anti-malarial medication and both were feeling homesick so they let their imaginations run wild. Labelling is a careful manual process.

The when-we-get-home list featured living the good life on their own land, growing veges, living off the grid, having children and running the sort of business which matched their principles. And, God willing, they would be able to make a decent living out of this business.

Warren, originally from Christchurch, had a degree in psychology and history and worked in various jobs before he joined Renee in London. There he became involved importing organic hemp seed from Hungary and distributing it to health shops and the food industry. But don’t get him talking about the numerous beneficial uses of hemp. He is passionate about alternative health practices, especially those using oils. 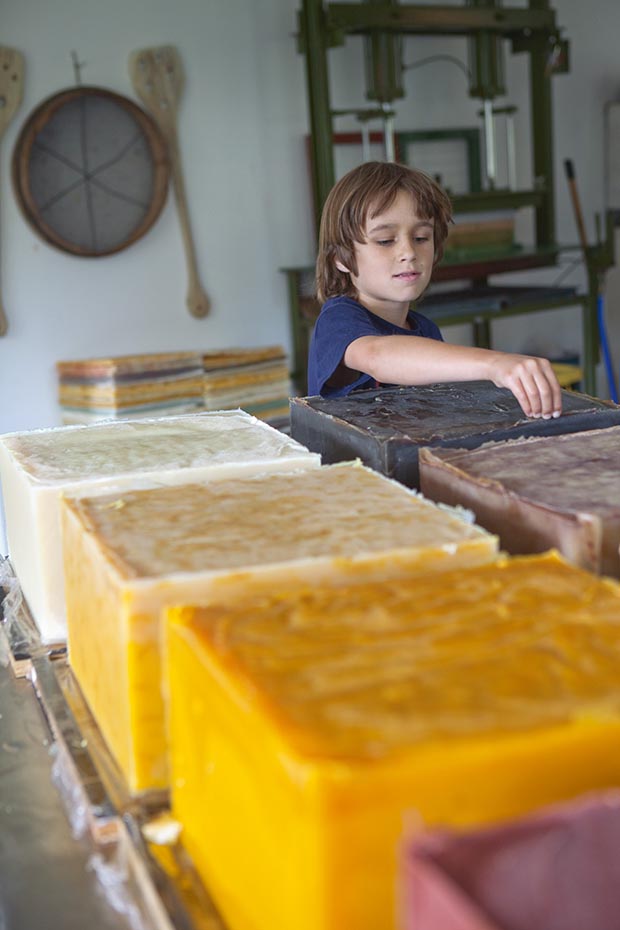 Son Louis lends a hand among the blocks of soap.

However, artist and hemp-oil producer weren’t careers that would buy them the good life anywhere, hence the transformation into soap-makers extraordinaire.

More stories you might like:
Home away from home: Brigit and David Kirk find country connection at their rural Hawke's Bay retreat

They returned to Christchurch where Warren found a job while Renee read, researched and experimented with making soap. Eventually she came up with a recipe using carrot, olive, coconut and rice bran oils as well as cocoa butter as a base and essential oils for fragrance. Initially palm oil was also included but this has since been dropped, even though the alternatives cost 10 times more. 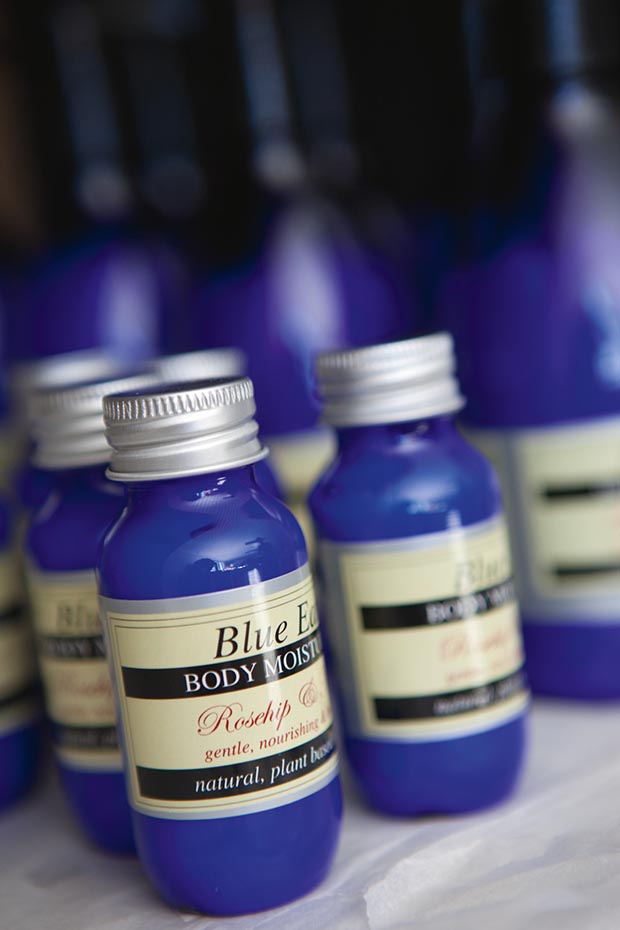 “Making soap is clichéd, I know,” says Renee ruefully, “but we did have a different idea about it. We wanted to make soap that was beautiful, using no animal fats, artificial colours or fragrances.” Making beautiful things isn’t hard for the former Ilam fine arts graduate who grew up in Auckland. After all, she had been in London courtesy of the Ethel Susan Jones Fine Arts travelling scholarship.

Renee sent gift boxes containing Angel Love Cake, still her biggest seller, and other soaps to shops around the country to test the market. The market responded quickly with a firm and encouraging “yes”. 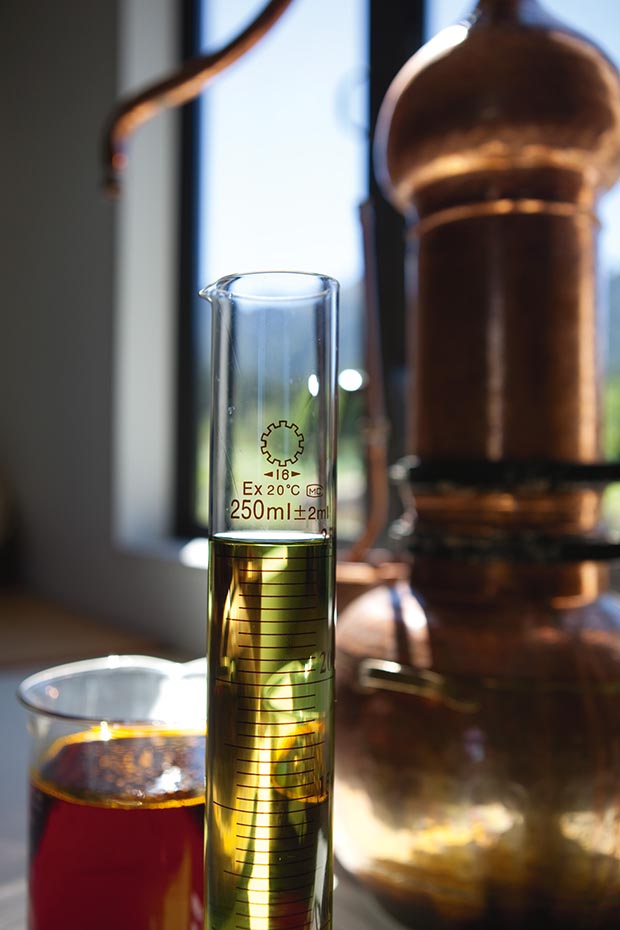 Since then the Blue Earth business has grown slowly and steadily and is now able to support Renee, Warren and their family.  Warren’s parents grow masses of calendula flowers on their Burwood property for Blue Earth. The dried orange petals go into the Angel Love Cake, Lemongrass and Rotorua Mud soaps.

The couple has always tried to incorporate their principles into their work. Warren at the soap-cutting machine.

“We try to go further than sustainability by giving back more than our lifestyles may take. We do this by planting trees on converted farmland and re-establishing the native forest that once flowed down from the mountains,” says Renee.

Warren adds: “We also try not to over-package. We minimize waste, use recyclable materials and recycled paper. Blue Earth also relies primarily on solar power as our form of electricity. Twelve solar electric panels ensure that Blue Earth runs smoothly and efficiently with as few emissions as possible.” 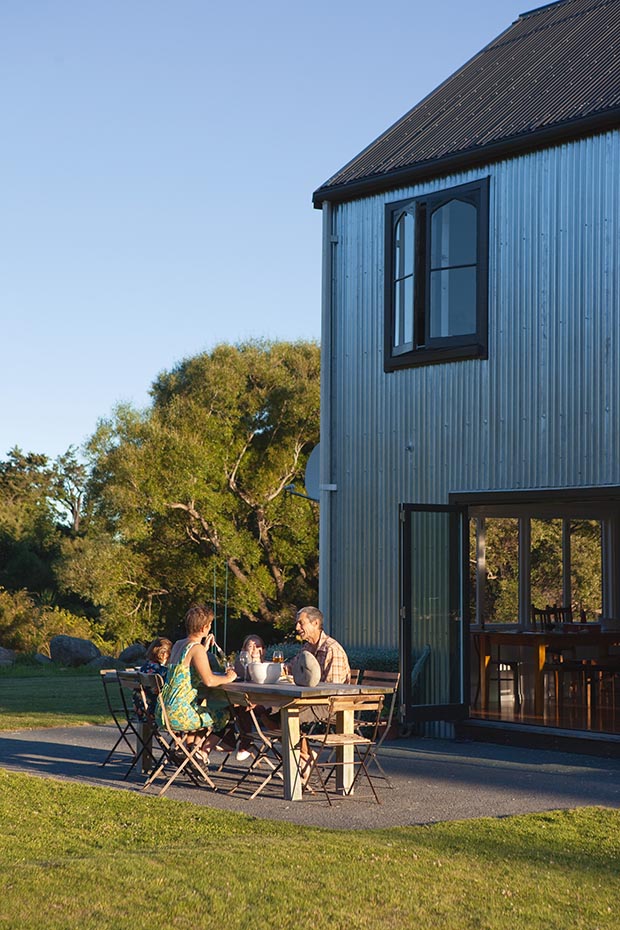 The family dines outside.

In just over a decade the couple has acquired their wide-open space near Mount Somers, their own self-built home totally off the grid and a successful business. They also have two children – Louis aged eight and Lola, five. London wish-list complete.

But they won’t pretend it’s been a cakewalk.

When they bought the land in 1998 it was 14 hectares of gorse and scrub and their home was a caravan. Hard work and the help of a digger transformed it into a green and flourishing block featuring natives and exotics. Their housing arrangements have improved too. From the caravan they shifted into a small cottage they built themselves before finally moving into their two-storeyed corrugated iron home, also designed by both and built by Warren. A peek of the peak of Mt Somers from the orchard.

The cottage is now home to a Japanese bee-keeper, his wife and child. Renee and Warren also offer shelter to two retired horses, even though no one in the family rides.

Warren’s skills as a builder and problem-solver are evident in the large metal shed which is the hub of the Blue Earth enterprise. He has made most of the equipment himself, using odds and sods and a lot of ingenuity.

“I could have bought it from somewhere like the States I suppose but it would have cost me thousands. The way we’ve done things is much more low-key and we haven’t had to go cap in hand to the bank.” He’s hot on this. “Did you know the word for mortgage is death grip?” he asks, eyes glittering. “Think about that. Mort meaning death and gage for grip. We haven’t wanted to get into debt so we’ve done a lot of things ourselves.” 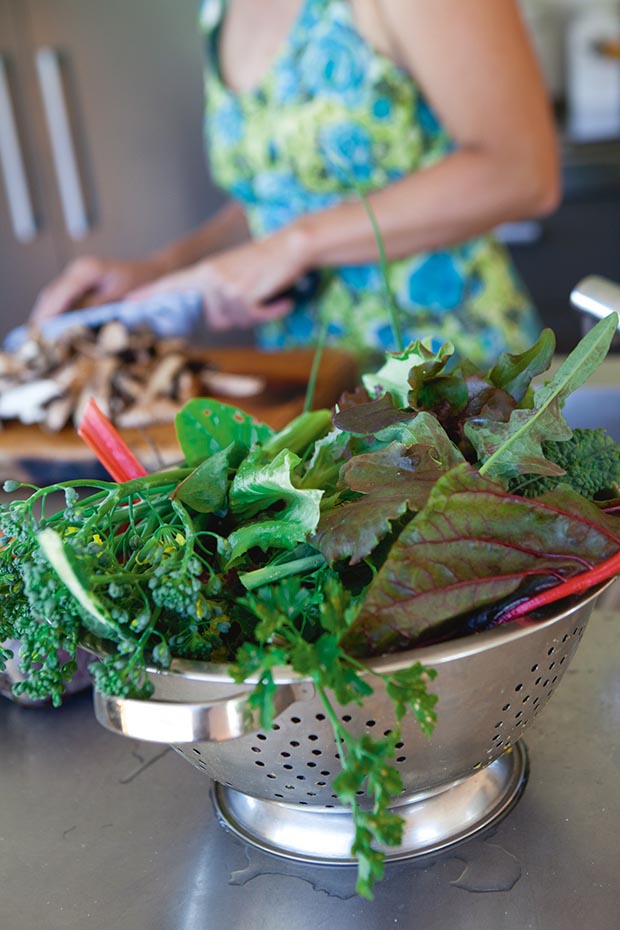 About 80 percent of these are made in their workshop with a handful made off site to their recipes. The response from customers has been gratifying. Overseas visitors often request more to be sent after they return home. Others with sensitive skins swear it is the only soap they can use. Some responses are entirely regional. In Ashburton their Dead Sea Mud soap is popular because a local customer with dermatitis found it helpful and told their doctor who appears to have told many of his patients. Renee’s next dream is to get back to her art.

More stories you might like:
How Dr Emma Wyeth is helping improve the health sector for Māori

In the meantime, Blue Earth is more than satisfying as a creative and fruitful dream come true for both her and Warren. As for the joy of working with such heady aromas, Renee smiles and says:

“Actually what happens is the more time you spend in the workroom, the less you notice the scent until eventually it seems to fade. But if you go back to the house and then return, you notice it again.”

ON THE SCENT  OF SUCCESS From the beginning, Warren and Renee aimed to grow within their means.

The way they see it, small steps mean a smaller risk. On the other hand, there are times when they have just closed their eyes and jumped.

Renee says: “Being practical is sometimes just plain boring and doesn’t always allow for the creative.”

What makes them successful?
High-quality products made with premium ingredients sell themselves. Since they are not mass-produced, they offer a more personal consumer experience.

What are their biggest challenges?
Trying to find quality time to spend with the children and each other, growing the business, improving  the land and having an idealistic dream of living  in the country.

To what do they owe their successes?
Staying focused and having pleasure, passion and belief in what they are doing, as well as support and advice from family and friends.

Where do they want to end up with their business?
They’re happy to pursue bite-sized dreams at the moment. They have new products they’d like to produce but their wildest dream would be to have Blue Earth stores not just in Christchurch but also in Wellington and Auckland.

Where can readers buy their products?
Throughout New Zealand in health food and organic shops as well as design and gift stores. Stockists are listed on the website
www.blueearth.co.nz

How do prices compare to those of supermarket brands?
Naturally they are a little more expensive because they use high-quality ingredients and are produced in small  batches so the product  is fresher when it reaches the customer.

This article was first published in Issue 36, March/April 2011