On the best of days, the grueling sport of race walking feels like dancing to New Zealand’s top-ranked female competitor Alana Barber.

An elite athlete’s body is like a finely tuned machine, precision-engineered to perform exacting tasks. All moving parts need to be synchronized, the cogs of body and mind meshed, the minutiae of everyday forgotten as the athlete switches into race mode. Is today the day when he or she will realize everything they have worked towards?

Kiwi race walker Alana Barber, 33, has experienced such a day. She finished second in the women’s 20-kilometre road race at the 2018 Commonwealth Games held on the Gold Coast — her time of 1:34:18 significantly better than the 1:35:55 performance she had clocked at the Rio Olympics two years previously. Then, she finished 35th, undone by the hot conditions.

At the Gold Coast, she was buoyed by the crowds, which included many New Zealanders who made the short hop across the Tasman. She was aware that friends were there to support her and — most importantly — her parents, David and Shirley Barber.

As a youngster, Alana’s athletic ambitions were stoked by her mother who, as Shirley Somervell, represented New Zealand at the 1974 Commonwealth Games in Christchurch in the 800-metre and 4 x 400-metre women’s relay events.  Alana was determined to follow in her footsteps, but even as a five-year-old, there were indications she might not conform to athletic norms. 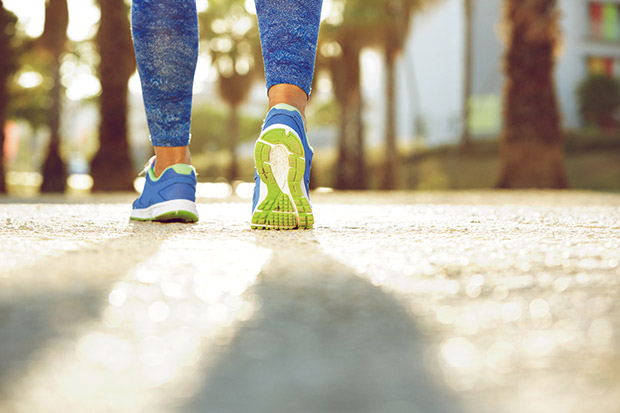 “I was very feminine; I hated pants. But I loved sport, and if I were going to run, I had to be wearing a dress.” But hidden behind the frills and flounces was a fiercely competitive spirit. “I loved competing. It didn’t matter who I was racing against — whether they were older than me or boys — I loved the competitiveness of sport.

She was also enthusiastic about the idea of representing her country, of competing not solely for herself but of being part of something bigger. And although she had long envisaged herself as a middle-distance runner, a knee injury when she was 22 would prove life-changing.

Her mother, who had been race walking for a decade, suggested that Alana take up the sport as a means of keeping fit during her enforced break. “I was reluctant at first. I had tried it when I was 12 when Mum first took it up and I thought it was a silly sport. Why race walk when you can run faster?”

Many people have asked the same question. The sport polarizes opinion, and while its critics slate it as a joke, others appreciate the athleticism and stamina required — some even describing it as an art form.

Second time around, Alana’s initial misgivings about race walking disappeared; she was hooked. The sport represented the complete package of a physical and mental challenge, with athletes required to walk as speedily as possible from start to finish while ensuring the correct technique is adhered to.

The seemingly awkward gait, the full rotation of the pelvis; short quick strides with one foot almost always in contact with the ground; a straightened leg; arms low and pumping — the margins for error are slight and mistakes are costly. Immediate disqualification is the ultimate penalty.

To Alana, race walking is akin to dancing. It’s about rhythm and pace. It’s about how, on a good day, she feels as if she’s gliding along the track or road. Unlike runners, walkers don’t bounce — there’s no up and down motion, it’s all about forward momentum.

“It’s not the technique itself that makes things uncomfortable; it’s external factors such as the weather conditions or being in a tough race where you’re pushing yourself. Aside from that, it’s very comfortable, quite methodical. Different races provide different challenges; it depends on location and environmental factors,” she says.

During a race, there’s no time to admire the scenery, she’s her own onboard computer, continually monitoring pace, heart rate, checking her technique, and being aware of fatigue since any loss of form could draw unwanted scrutiny from the judges.

Is she taking on sufficient fluids and carbohydrates? Has she gone over her lactic threshold too early? “I never get bored during a race,” she says.

She has been disconcerted, however, and it happened during the Commonwealth Games race. “The crowd was massive and really noisy, and I couldn’t hear myself breathe, something I hadn’t experienced before. Having that taken away was quite overwhelming.”

But it was worth it; she won silver, a well-deserved reward for nine years spent juggling sporting ambitions and work, including two years based in Leeds training at the British Race Walking Centre while also holding down a fulltime job.

With a communications degree (majoring in television), she always managed to find work in the industry until she moved to Melbourne in 2015, an important step in her quest to become an elite athlete. There, she got a job in a circus.

“They needed backstage crew, and as all the shows were at night, it worked in perfectly with my training, which I did in the daytime. I learned a lot. I got to see another side of professional performance. These were people living their dream.”

While Alana has been fortunate enough to compete internationally, Covid-19 threw her plans for 2020 into disarray, her goal of being involved in her second Olympic Games dashed.

Last March she was in peak form, gearing up to compete in races in Japan and Europe to hopefully meet the qualifying time set by the New Zealand Olympic Committee. With the standard set at 1:31:00 for the 20-kilometre race, Alana needs to shave more than 30 seconds off her best time of 1:31:32.

With her globe-trotting lifestyle (hopefully) temporarily curtailed, Alana had to do a reset. On both a personal and professional level, it’s been tough. Her boyfriend, Polish race walker Damian Blocki, also her coach, is stranded in Germany, where he lives, the couple forced apart due to travel restrictions.

Meanwhile, she keeps busy, maintaining a fitness and training regime and studying for a degree in psychology. She’s also working as a teaching assistant on Waiheke Island, where she lives.

The rescheduled Olympics remain her primary focus for 2021, and she hopes a qualifying race organized for late January will see her break the 91-minute mark and guarantee her a place in the starting line-up in Japan.

The sport has two rules:

1. An athlete’s foot cannot leave the ground until the heel of the front foot has touched.

2. The supporting leg must straighten from the point of contact with the ground and remain straight until the athlete’s body passes directly over it. At the courses, which are either on an athletic track or a one- or two-kilometre road loop, a judge is placed every 100 metres or so.

Should they see an athlete transgressing, or close to, they caution him or her by raising a yellow paddle. A yellow paddle has one of two symbols — a bent line to indicate a bent knee and a squiggly line for the loss of contact (with the ground).

A racer can receive yellow paddles — a caution — from every judge but no more than two (one caution for each offence) from the same judge. If a judge thinks the athlete has not corrected his or her technique, a red card is put against them. A third red card will see a racer disqualified. 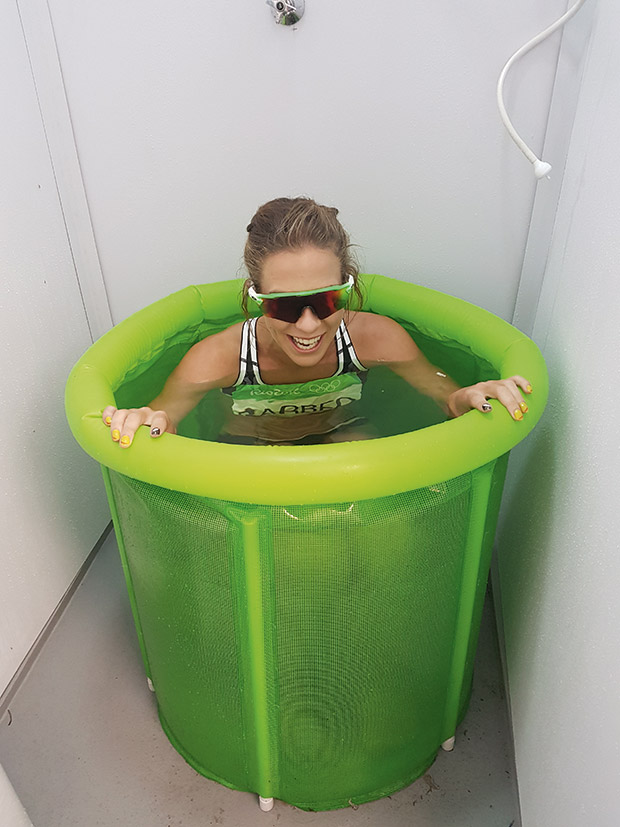 Alana is involved in a research project, led by Dr Chris Stevens from Australia’s Southern Cross University, about the effects of heat on endurance performance. Photo: Kat Austin.

Alana is involved in a research project, led by Dr Chris Stevens from Australia’s Southern Cross University, about the effects of heat on endurance performance.

The research aims to determine the cooling strategies that lower core temperature, which leads to improved performances in hot conditions. Part of the study involves Alana sitting in an ice bath before a race and swallowing pieces of ice.

It means she can be 20 minutes into a race before her core temperature rises to match her pre-race cooling temperature, giving her a distinct advantage over her opponents.