Polly reconnects with land and life after losing cellphone coverage.

Days passed without a signal. On the windowsill, our phones sat silent and unresponsive. Muttering darkly about network providers, I tinkered unsuccessfully with my settings.

Eventually, a bar of reception returned James’ phone to a communicative state, but mine remained aloof; withdrawn. I bought a new phone. Nothing. The following week  I traded it in for another. Still nothing.

“Look,” the shop manager told me tersely, “you can’t keep bringing them back. It’s not our problem.” Once, a visiting friend was so desperate to receive messages, he taped his phone to a long bamboo pole and waved it hopefully about our hills. It didn’t work. I knew this, but still I resorted to “phone yoga” in our house’s only hot spot; arm aloft as I willed elusive EMFs to funnel in from whatever tower they were on so I could contact the outside world.

On the coast, my phone chirped perkily as missed messages flooded in. A Facebook meme also popped up, sagely declaring: “There’s no wi-fi in the forest, but you get a better connection.”

Was it a disdainful snort that issued forth? Nature-bonding is all very well, but who wants that when there’s internet banking to be done, documents and texts to send? Yet however much I moan about our lack of reception, I love the forested ranges surrounding our remote home.

If they offer a better connection, what with? Out here, I’ve learnt about seasons and moon-time rhythms. Without digital distraction, there’s a different quality to the relationships occurring. It’s to do with being present. If you’re plugged into a screen, you’re somewhere else, disengaged from what’s around you.

With no television, gaming or YouTube on offer, our barefooted kids must create their own entertainment and learn to connect with themselves. 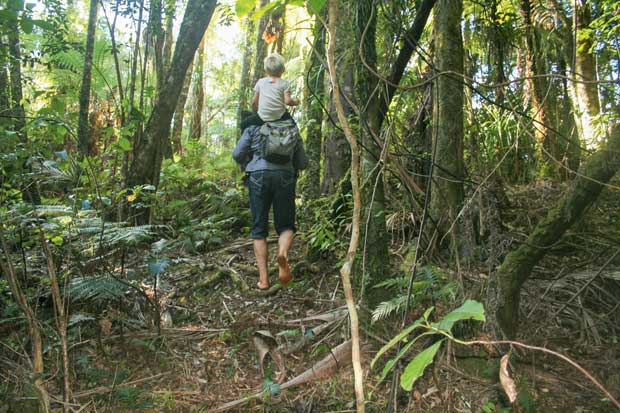 Even at the height of our phones’ receptive powers, the only streaming available at our place comes from the creek where we take our drinking water. Rain adjusts the volume of its gurgling music. I was late to join Facebook. It’s been weirdly engrossing.

Every time I emerge from that warren-like realm of meaningful quotes, inspirational pictures and extraordinary trivia, my ability to recall what I’ve seen is virtually nil. Where am I when I’m in that sinkhole? Science says I’m fed dopamine in exchange for my energy and time. Does the gain justify the cost? The question never arises when I go for a bush walk because nothing is lost. Even when I can’t find my way, I’m aware of my footsteps.

The silence of people absorbed in their handheld devices can be unnerving, especially in public places where everyone seems as severed as islands. It’s unlike the silence James and I shared the other night with two helpxers (exchange-programme workers) around an outdoor fire.

That had an air of comfortable stillness to it, even as hissing wood crackled and spat with flame. Above, the Milky Way slowly twisted from its black centre in ribbons of light like a vast double helix of DNA. Instead of downloading static noise, it felt as if we were connecting with something fluid and conscious that was bigger than us.

Helpxers Melissa and Robin were traveling the world, collecting ideas about sustainable living. Yet their enthusiasm for life on the road wasn’t infectious.

James and I aren’t going overseas after all. We thought we were. We had announced this was so; bought new passports, befriended a travel agent and joined online groups to learn about renting in Indonesia.

But our hearts weren’t in it, and it took just one conversation to assert this was mutual. Peru was the country that had called, and when we scuppered that plan due to costly airfares, we lost our excitement.

It’s strange the way some countries beckon. Maybe we aren’t so different from jigsaw puzzle pieces, instinctively seeking the right unions to grow; to feel part of a bigger picture? My new working phone intermittently joins me to the outside world. But for now I’ve discovered the surrounding forest truly offers a better connection.