A seaside town is brought to a standstill after a drowning.

Acting on the adage ‘don’t leave home till you’ve seen the country’, we’ve so far spent this summer further exploring the bush surrounding our valley. While other families eased loaded cars onto busy motorways as a prerequisite for their vacations, we took the kids camping across the creek. The new track we put in before Christmas has opened up access to a large tract of wilderness land we hadn’t properly explored until now.
With a collection of treasured friends, we formed a campground on terraces up the hillside and spent lazy days idling beneath gazebos on the edge of the forest while a tribe of children ran wild through the trees and congregated at the new rope swing.
Later, as kids practised ‘sleeping over’ in different tents, we sat beneath a great dome of deepening twilight, engaged in meandering conversations while a chorus of kiwis rang out across the hills and starlight pinpricked the night.
That home was just a 10-minute bush walk away was a double-edged sword. Nipping back to the house for some forgotten item resulted in three carloads of gear requiring transportation when we eventually packed up camp.

When rising heat waves made the green valley shimmer, we headed to my mum’s for coastal relief. From her place, the beach is a five-minute walk down the hill. One sun-scorched afternoon we were just stepping out in our togs to go swimming when a fire engine screamed into the carpark below.

This, then, is what happens when someone is drowning at a suburban bay: a plump couple will stand on their balcony, licking ice cream cones as they take turns to peer at the sea through binoculars. Traffic will crawl past the beach whose access is jammed by emergency vehicles with flashing lights. A woman, fully dressed, will run into the water; clutching her mouth in Munch’s Silent Scream as the surf wraps her dress round her thighs. Men will be poised on the rocks, as taut and useless as violin strings as they stare at an unreachable body clawing for a lifeline that isn’t there. Everyone else on the beach will pull into a knot of shocked and awful stillness, drawn tight and small as a predatory Death passes near. One bay around, people will continue jumping the waves in golden sunshine while the woman at the Four Square cheerily wishes her customers a good afternoon because she doesn’t yet know.

News of the drowning rippled out like circles from a stone dropped in water. That evening, beneath a pastel sunset sky, the sea lay as flat as a silver-yellow mirror, but nobody came to swim. A family had gone home without their father/husband/uncle and son; and for a lingering moment the sudden snatching of life had punched a hole in the cinematic bustle of a seaside resort, exposing something fragile and easily broken. Even as time began moving again, stillness hung in the air. The next day, at other beaches, nobody ventured out in the sea past their waists.

Life moves like light. Aging is the journey from dawn till dusk. We travel through patterns of darkness and dazzling brightness. Change slams down as fast as a lightning bolt. For some death’s a gradual transition as shadows seep in for the night. For others, things end as unexpectedly as a power-cut. 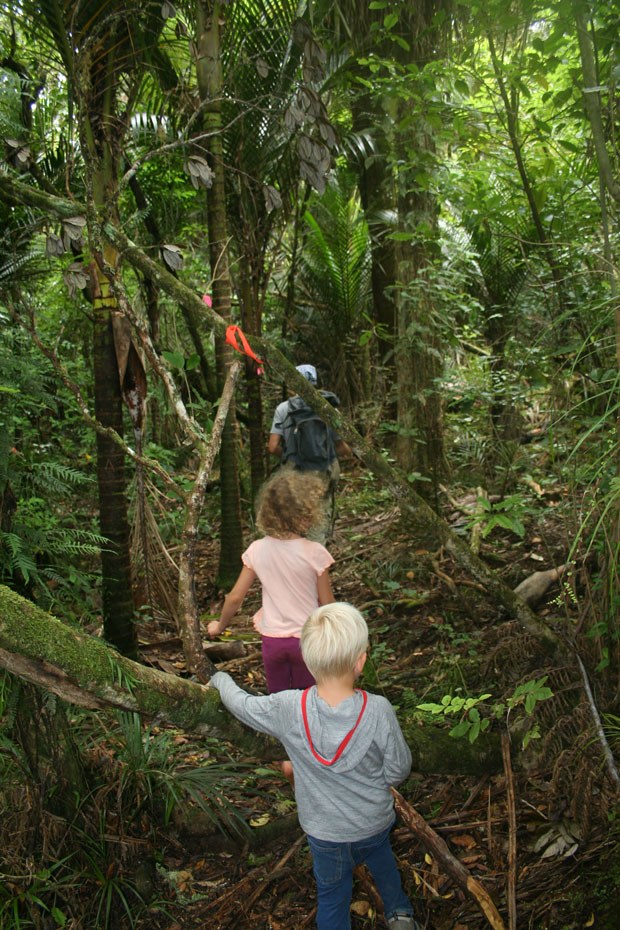 We were treated to an electric surge of life-force the other day when James and I decided to take the kids into the bush to walk the northern perimeter of our forest, where James has laid a possum-trap line.
Prepped for the six-hour hike, six-year-old Vita and three-year-old Zen were admirably spirited as they clambered over logs, sidled muddy wild-pig wallows and pushed through tangles of supplejack, tree ferns and other native plants.
At lunchtime, James mentioned he’d heard a pig. Vita pressed anxiously in by my side, but I breezily assured both children wild boars were more scared of us and would never come near.
Not long after we’d resumed walking, however, an unmistakable squealing carried down the track. We froze in the dense bush, eyeing each other as the volume increased.
‘Get off the track,’ James suddenly yelled, gripping the machete and steeling himself as a human blockade.
We didn’t run; we flew. Despite being barefoot, I was suddenly transported 10 metres into the bush, subsiding on a rotten log with Vita clutching a leg and Zen on my hip as a large black pig came stampeding through the undergrowth, pursued by our dog, Pax.
The pig made a beeline right for us. Vita screamed in terror, and the pig screamed too. Barking ferociously to scare it away, I flapped my arms like a lunatic. Grunting and squealing, the pig barrelled past, so closely we could have touched it, before disappearing over the hill.
Through his top, I could feel Zen’s heart beating like a hummingbird’s wings.
‘Was that a real pig?’ he whispered.
It was life; hurtling at us and charging our veins.
It was an adventure, we told the wide-eyed kids, and we were lucky to have experienced it.
They got it. Even though they both armed themselves with spears for the rest of the hike, they sang and laughed the whole way home. 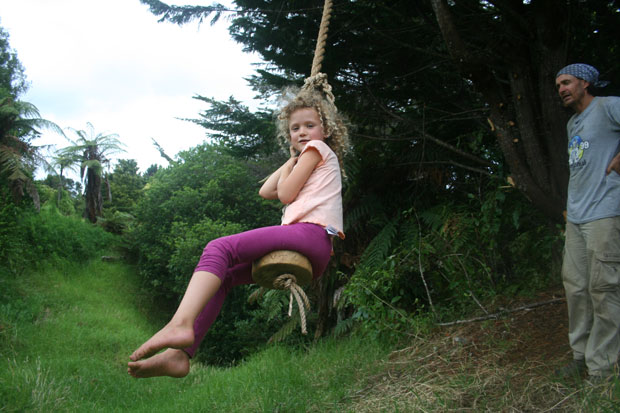