A stay at these all-glass cabins on the outskirts of Kaikoura is to step into a magical realm where the world is reframed and time works in mysterious ways.

It was just gone midnight. A thunderous roar ringing in her ears, Angela Blunt gripped the doorway and tried to spot her opportunity to surf the bucking floorboards towards her youngest son’s bedroom. In the kitchen, plates became china frisbees. A stag’s head on the living room wall flew like a poltergeist to the opposite side. 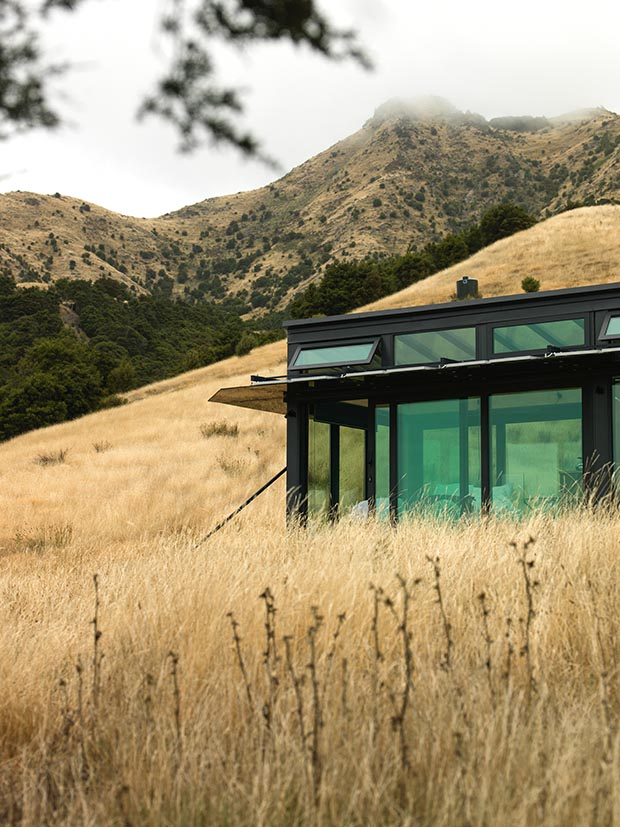 A bedroom with a view, both out and up. Stargazing is possible without even leaving the sheets.

Daybreak revealed the devastation: three chimneys in the 100-year-old farmhouse lay in tumbledown disarray and a giant Italian poplar was collapsed in the creek.

It was only after Tony Blunt had made his way via single-cab ute, mountain bike and ultimately a helicopter from St Arnaud in an overnight dash to ascertain that his family was okay, that the Blunts remembered the little glass cabins on two secluded hillsides of their 800-hectare Kaikoura farm. An off-road bike is the preferred form of transport for farmer Tony Blunt and his trusty hound. Tony has been blown away by the success of the pods.

The PurePods are the brainchild of Grant Ryan, a “multipreneur” and “hunch-cruncher” who among other start-up projects has invented the YikeBike, a sit-up straight, fully electric, fold-up model that promises urban freedom. With four glass sides, a glass floor and glass roof, the pods offer a different kind of freedom: the luxury to truly feel part of the wide New Zealand landscape in absolute comfort.

“It’s like being at one with nature while not having to camp,” says Stephanie Hassall, CEO of PurePods.

Eight years in development, the 20-square-metre glazed cabins are an engineered expression of breaking down boundaries, both physically and metaphorically.

“Designing a glass building to meet code and thermal regulations was a challenge,” explains Stephanie. 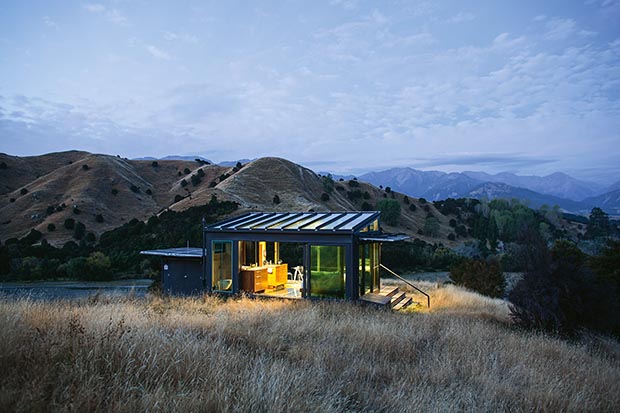 Sunshades hold photovoltaic panels and the service shed (to the left of the building) drives the off-grid operations.

It meant a heads-together approach for structural, environmental and electrical engineers. It worked. The 7.8 magnitude quake that uplifted the sea bed, buckled rail lines and toppled historic homes, left the pods on the Blunts’ property unscathed. When Tony and Angela finally walked the pathways through golden grasses to see how these mini homes had fared, the only indication of any untoward event was a couple of wine glasses smashed to the floor.

The Blunts have occupied this land, which stretches from the Kahutara River rising to 1000 metres above sea level, for three generations. Despite the earth moving and stock prices fluctuating, they’ll no doubt be here for a few more decades yet. 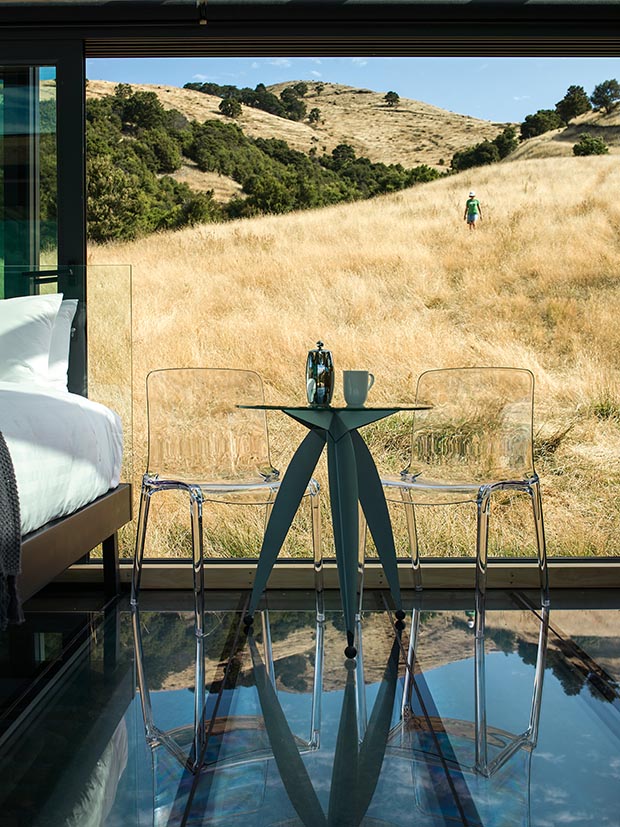 Transparent chairs and a glass table ensure there’s very little clutter to encroach on the feeling of being at one with nature.

“My three boys all want to be farmers,” says Tony.

“So there’s a good chance we’ll go another round.” The lanky, tousled-hair former Young Farmer of the Year runs half-merinos, angus and a few murray grey cattle. Like all farmers, diversifying an income stream has been top of mind for some time. 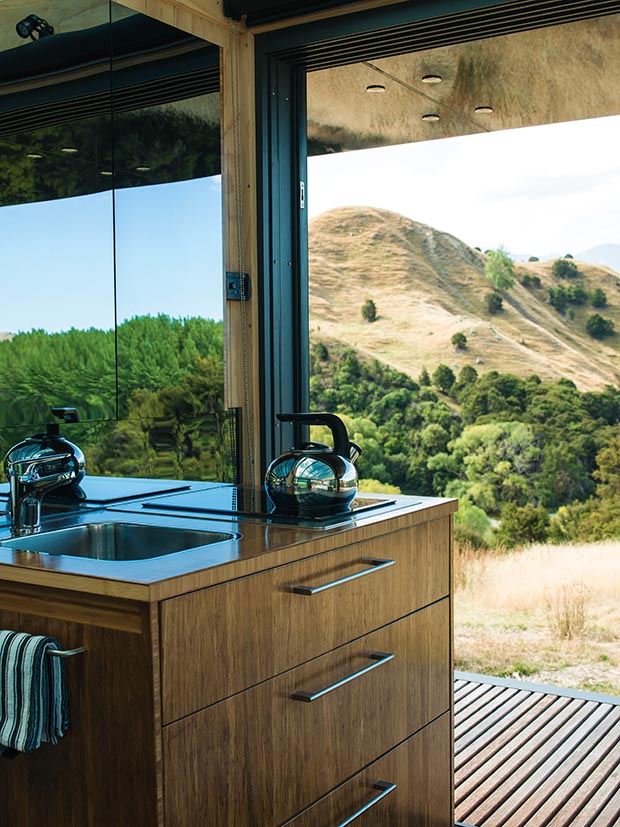 A solid service wall (containing the electrics needed to run the cooktop).

“Farming is so fickle,” he says. “We knew we had fabulous views so tourism in some shape or form was always an option.”

When Tony spotted the first PurePod at Little River on Banks Peninsula, he knew he’d found the form. Then he upped the ante. He wanted a pair. These are set about a kilometre apart, each in its own valley and Tony takes some pride in the fact he helped build PurePod’s “number two and number three”.

His boys dug the holes for the concrete piles of the steel sub frame. Then he worked alongside the builder to piece together what he describes as two giant Meccano sets. 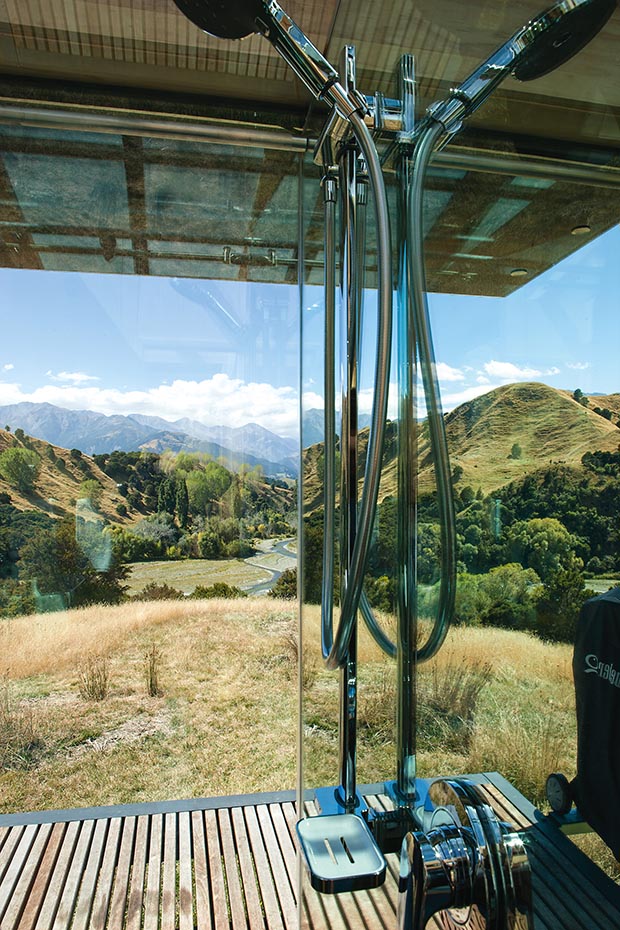 A solid service wall separates off the shower area for privacy.

There was a five-week period when, with no road north and no main highway south, it was almost impossible for guests to get to the pods. Not that there weren’t those willing to try. In the year or so since they opened, they have operated at 90 per cent capacity. Most guests are couples and there have been a number of on-site marriage proposals. It’s an adventurous journey to the start of a commitment that is perhaps the biggest adventure of all.

They make their way along the coastal highway in fits and starts of stop/go signs before turning inland onto a shingle road that fords a stream in three places and culminates in a wooden bridge, just wide enough to navigate in a dead-straight line. There is no welcome party or check-in procedure, just a gravel car park with a cubicle containing complimentary bright yellow raincoats and Redband gumboots. 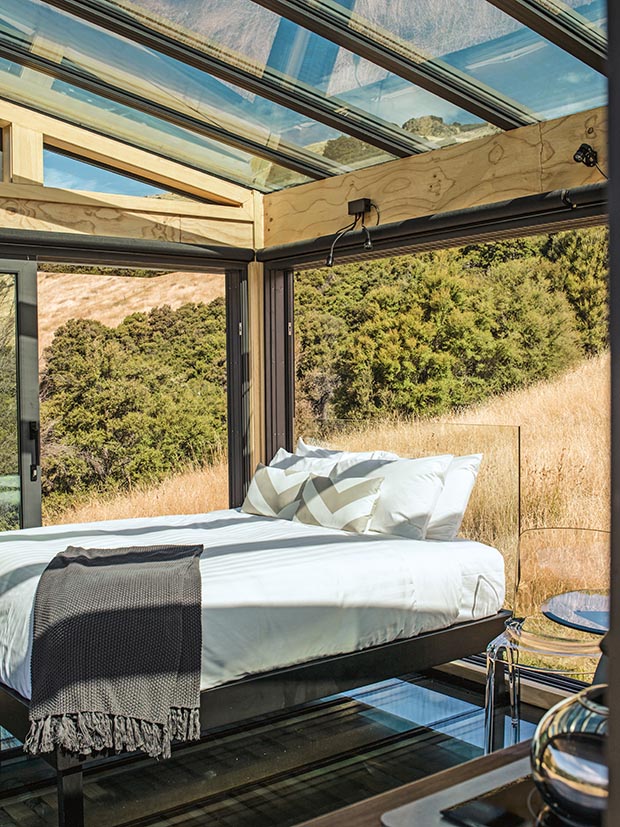 A Perspex headboard is another design touch that ensures the view is sacrosanct.

Guests are encouraged to bring backpacks for the walk in to their accommodation, a 15-minute slice of South Island farm that takes in open paddock, enters the bush beneath a tapering manuka forest and heads heading up the hill through knee-high grasses. The tiny glass cabin that is home for a night or two is dwarfed by the mass of the Seaward Kaikoura Ranges. Billed as “the world’s most environmentally transparent building”, each pod has wraparound views out to the distant craggy outline, up to the sweep of sky and even down to the ground-cover species seen through the floor. The only solidity is a timber-lined service wall, which divides the ablutions from the living and sleeping area.

“We wanted the pods to be floating in the landscape and have less environmental impact than a tent,” explains Stephanie. A separate engine room alongside the main structure contains the off-grid technology – the power, water and heating systems that took close to a decade to perfect. (It also houses the cleaning products that are necessary to keep all that glass sparkling.)

With no internet, the options for connecting with anything other than the immediate surroundings are limited. Which is as it should be. Although compact, the cabin is well equipped with crockery, cutlery and glassware and even a small integrated fridge to keep the vino cold.

“The idea is to relax and spend time with your significant other,” says Stephanie. Privacy is sacrosanct. Tony will not muster within the environs and his children are under orders not to ride their motorbikes when guests are in residence.

For the local and international couples who come to stay, this is a time to take notice. There are many hours to observe the reflected view in the glass ceiling or floor, to sit on the deck and read until drowsy, to watch the cloud creep into the valleys and birds fly past at eye level. In summer, cicadas riot by day and a plaintive cow bellows; at night dueling moreporks call in duet.

Stargazing is on the list of encouraged activities, aided and abetted by a telescope, a New Zealand astronomical yearbook and a double-sided planisphere.

Tony is endearingly thrilled by the shining feedback the experience receives. Although officially he’s not part of that experience, he often designs to be in the front yard near the car park close to checkout time. 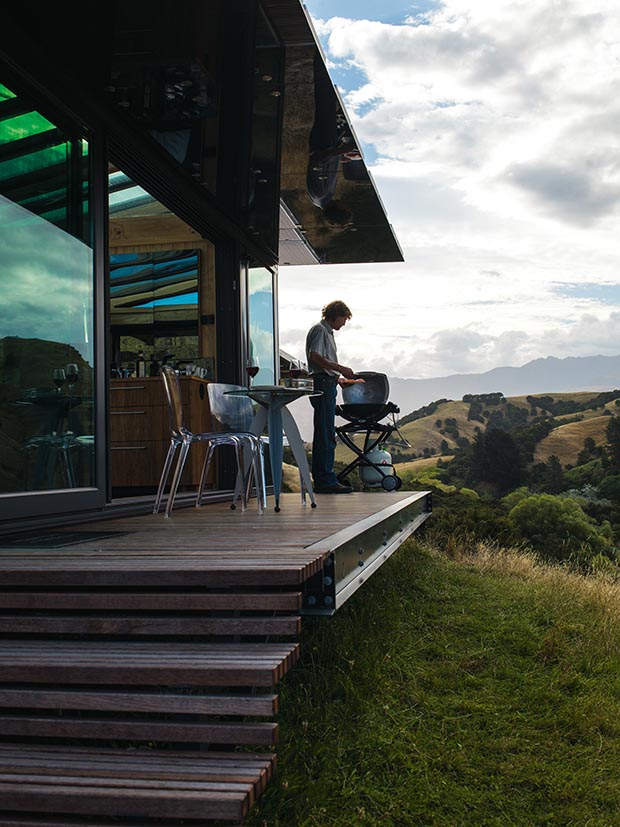 Sliding doors on three sides open the cabins to the full experience of nature.

“One guest from China woke up in the middle of the night and saw more stars in 10 seconds than she had seen in her whole life,” he explains. “She was so excited that she couldn’t get back to sleep.”

More stories you might like:
Home away from home: Brigit and David Kirk find country connection at their rural Hawke's Bay retreat

While throwing a snarler on the barbie is still part of our urban backyard, for international folk, the opportunity to cook a piece of meat al fresco is often another first. Guests can choose to self-cater or order a breakfast pack and pre-delivered dinner ingredients, which include salads and South Island salmon, beef or venison to be grilled on the Weber, the backdrop a spectacle in contrast to such domesticity.

It’s not just overseas visitors who lap up the landscape. Forty years ago everyone had a cousin’s place where they were despatched to spend holidays on the farm. Says Tony:

“It’s sad but these days that doesn’t happen because so many farms have been gobbled up by big companies that even people from our own country get such a buzz from the rural experience.”

Delivering on the 100 per cent pure New Zealand promise was fundamental to the business plan of the brand. Delivering a close-up encounter with a genuine good bloke is just icing
on the cake. 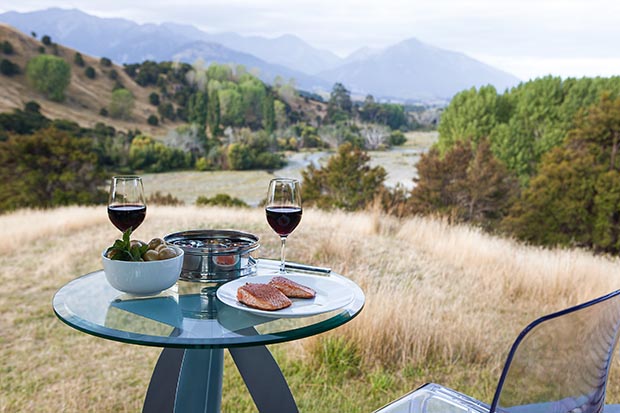 Uninterrupted views to relax and unwind.

HOW THE BUSINESS MODEL WORKS

❯ PurePods deliver a luxury “pure NZ experience”. The company has a plan to build up to 30 clear glass units over the next couple of years.

❯ Aimed at the high-end market, the cabins are only located in areas with spectacular scenery and where privacy can be guaranteed.

❯ The pods are a partnership between landowners (often farmers) and the company who enter into a lease and profit-share agreement, depending on the level of investment the farmer makes.

❯ The landowner is responsible for keeping access safe and clear and cleaning the pod.

❯ PurePod handles the build, interior fit-out and equipping of the pod. It also does the marketing, takes bookings, liaises with guests, organizes the maintenance, remotely monitors the power levels and systems and employs a local high-quality food supplier. The one-kilometre walk into the pod site traverses wetlands, bridges and manuka forest.

❯ Solar panels located on top of the sun shades and the roof of the engine room shed provide the power to run the hot water system and the lighting which draws 24 volts.

❯ Hot water is provided by a biofuel-capable burner.

❯ Wastewater is treated with an eco-friendly Biolytix system which uses tiger worms to “clean” the water before it is fed into the paddocks below the pod.

❯ Air conditioning is provided by opening the doors, which are triple sliders on three sides. Should the temperature inside the pod reach 38 degrees Celsius, clerestory windows (with insect screens) open automatically.

❯ There are two fan-driven radiators as well as patent-pending glycol loop heating embedded in the glass floor. purepods.com The upmarket loo with a view is a luxury take on the classic Kiwi dunny.