Take an ancient, fermented drink, then add a whole lot of coconuts and billions of beneficial bacteria. A Raglan business has hit on a winning recipe.

When people talk about culture in a business context, they generally refer to how employees engage and how an organization operates. While those things are hugely important to Tesh Randall and Seb Walter of Raglan Food Co, they focus on culture in a much more literal sense.

That’s because Raglan Food Co is a culture-based business. Without the right cultures, this Waikato company wouldn’t produce nearly half the coconut yoghurt made in New Zealand.

Nor would it have won almost immediate fans with its distinctive coconut kefir, which combines modern, plant-based sensibilities with an ancient art of fermentation. “If we’d known what was involved at the outset, we never would have started,” Tesh says. “We didn’t plan on doing this at all. It has snowballed.”

Kefir (pronounced keer-fear) is a drink with a long pedigree. It’s thought to have originated in the northern Caucasus mountains, where nomadic shepherds devised a way to ferment and store milk in leather pouches. Pleasantly tart (imagine a thin, effervescent yoghurt) and creamy, kefir is full of probiotic bacteria, assisting with healthy digestion. If you were going to have a meal in a glass, this would be a good one to choose. “Our kefir is a fermented probiotic yoghurt smoothie with six strains of culture in it,” Tesh explains. “It’s high in probiotics, but it’s very drinkable. It’s the opposite of most cheap, sugary smoothies, but it’s not an intense supplement that you can’t drink very much of.”

Raglan Food Co started producing its drinking kefir in February 2021. (“It’s a very modern version,” Tesh says. “No leather pouches, no shepherds.”) The cultures are still European but regularly sourced from France rather than the Caucasus mountains. While at-home kefir makers can indefinitely reuse the same grains, the Raglan crew uses fresh cultures every batch to ensure a consistent culture count that keeps the product tasting and performing the same.

After nearly seven years of successful coconut yoghurt production, Tesh says it wasn’t a giant leap to move into kefir, especially since they could use all the same machinery. Still, it wasn’t without its challenges.

Kefir is traditionally made with dairy milk, so switching it up to coconut milk wasn’t necessarily straightforward. “It’s much harder to make these things plant-based, and it’s a very sensitive product,” Tesh says. “We’ve learned the hard way.” 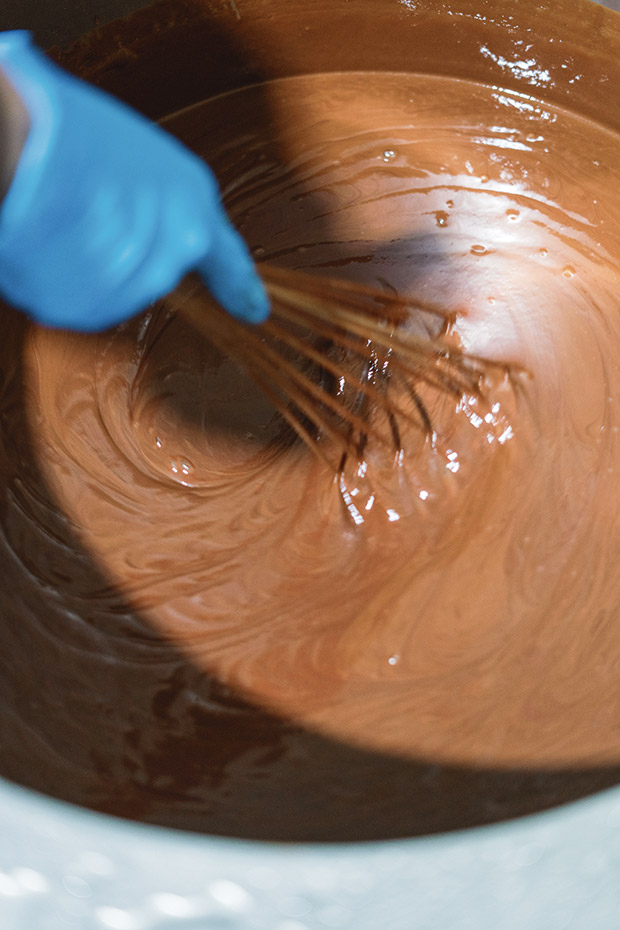 This kind of success is all the sweeter, considering that neither Seb nor Tesh have any prior experience in food production. The co-founders met in Auckland about a decade ago, at a seminar devoted to “the art of happiness”.

They came from very different backgrounds in New Zealand and Germany, respectively. Tesh grew up in Dargaville and Auckland, where she was home-schooled before diving into setting up a series of businesses from an early age. Seb grew up in Wäschenbeuren, Germany, and worked for big corporate brands like Adidas in finance and strategy. 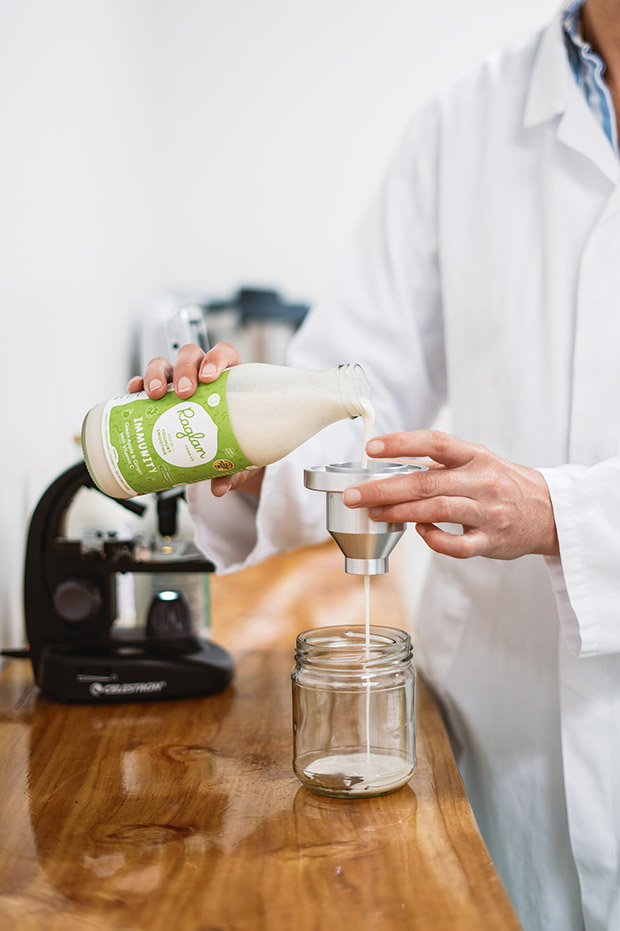 Despite those differences, they recognized a kindred entrepreneurial spirit in each other. They set up a business together within a year of meeting. Moving to Raglan, with its laidback lifestyle and long, left-hand surfing break, seemed like a logical next step for two people who felt uncomfortable in corporate Auckland. So did setting up The Good Agency, a digital strategy and content business that utilized both their skill sets.

Creating a successful plant-based yoghurt business happened entirely by accident when Tesh started making coconut yoghurt at home after realizing Seb was reacting badly to dairy products. “It’s good to be naive and curious sometimes, rather than to sit down with a big strategy,” Tesh says.

Raglan Food Co is now one of the biggest employers in Raglan, with about 30 staff. In November 2020, it moved from cramped premises in the centre of Raglan to a new, purpose-built factory on the outskirts of town.

“It was either that or move to Auckland,” Tesh says. “Our team all live here in Raglan, so it made sense for us to stay here.” The move was a key enabler for producing kefir and gave them the physical space to move into other products. 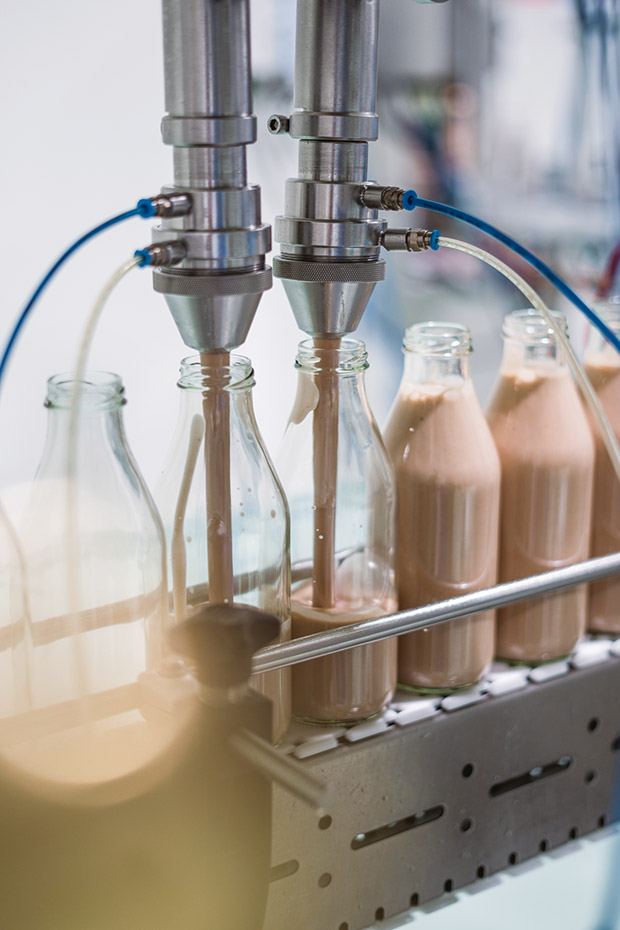 The recent hire of a general manager has meant Seb and Tesh can concentrate on different aspects of the business instead of doing everything. While she was once packing boxes and organizing deliveries, Tesh can now devote herself to strategy and marketing.

Seb concentrates on the financial side of things and works with suppliers and new product development. As the business has evolved, so has their relationship. After being romantic partners for nearly a decade, they decided to concentrate solely on their business relationship in 2020.

“I love being business partners with Seb, and we have developed such a great way of working together,” Tesh says. “I’m so proud of the way we’ve handled this — it’s been an amazing learning journey. I think it’s made us better co-founders.”

What to do with kefir? “Just drink it,” Tesh says. “A lot of people also like to add it to smoothies or pour it over granola.”

Raglan Food Co sources its coconut cream from Indonesia mostly because it is of exceptionally high quality with the best flavour profile — not to overlook the superb surf in that country.

The pandemic has made sourcing this white gold difficult. When Indonesia went into lockdown in 2020, its abundant coconut crops rotted on the ground because no one could harvest them. Freight costs — and shipping delays — have also increased costs and related pressures. “It hasn’t been the easiest time,” Tesh says with characteristic understatement. 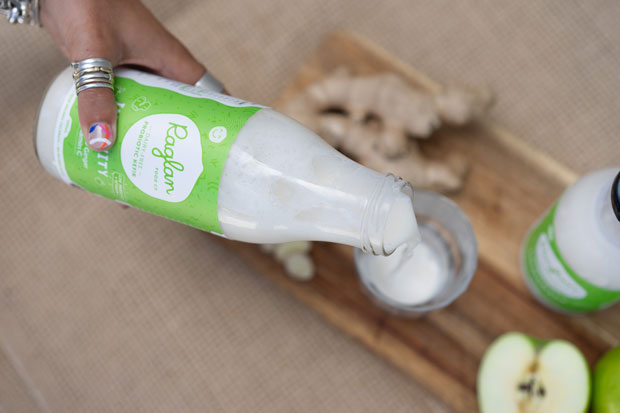 They have examined other coconut suppliers, including those closer to Aotearoa, but supply issues and taste preferences mean they’re committed to the Indonesian varieties. “Coconuts have different flavours depending on the variety, the climate and the soil, and we just really like the taste of Indonesian coconuts,” Tesh says.

The coconut cream reaches Raglan in 240-litre steel drums, which the team is now starting to sustainably upcycle into braziers featuring the town’s iconic pōhutukawa trees. Check out reforged.co.nz This smoothie will tingle your taste buds and remind you of warmer days.

Blend all the ingredients together, pour into a cup or jar (it’s a perfect opportunity to reuse your Raglan Food Co bottles) with a lid for portability and serve with granola on top if you wish.

Note: If your blender struggles a bit with the frozen ingredients, add a dash more liquid in increments until it comes together.