Raglan’s Solscape are leading the way in eco tourism

An old railway carriage sees a new life as a funky housing unit.

Phil McCabe and his partner Bernadette Gavin had been eyeing the most expensive property in Raglan, perched high above Manu Bay, with its breath-taking panoramic views to the Tasman Sea.
It was on holiday in 2002 in Australia that Phil had an idea on how to get it. While Bernadette walked the beach, Phil drove to the other end. “By the time she got there I had figured out how to make it happen.” The couple returned to Raglan and that September took ownership of Raglan Wagon Cabins, a fairly run-down backpacker property and its 17 train cars, two cottages and a manager’s residence. The new lifestyle appealed. It was a lot easier giving people a key and saying ‘goodnight!’ than the work Phil had cut his teeth on as an 18-year-old running his family’s restaurants. “I was just 31 and Bernadette was 30 and people said, ‘You guys own this?’”

Fourteen years on, the accommodation options have expanded to include an eco-bach, an eco-camp and the biggest earth-bag buildings in New Zealand. The original home is now a modern reception area with massage yoga room, café and conference rooms, all built with natural and re-cycled materials. It’s a model of sustainable tourism. “All through the Global Financial Crisis we had growth,” says Phil. “Only one year we flat-lined. Not too many businesses around can say that!”

The first two years were spent tidying the place up. Then Phil and Bernadette began to create their dream, building the massage room using recycled native timbers, the off-grid eco-camp with six tipis, a couple of big Belle tents, composting toilets and solar-heated showers. In 2007, while on holiday in Hawaii, Phil heard a radio interview with George Monbiot, author of Heat: How We Can Stop the Planet Burning. The book looks at how the world could make a 90% reduction in carbon emissions by 2030 – without bringing civilisation to an end – if people and politicians were willing to transform their homes, power sources and transport. “The interview captivated me and flipped my thinking. We decided to commit to 100% sustainability. That’s really what’s driven us for the last six to eight years.” A peep into one of their tipi, another sleeping option for guests.

In 2008 they built an eco-bach, based on passive solar design. It faces north, so when the sun goes overhead in summer it doesn’t heat the house; in winter sunlight comes in on an angle, heating
the concrete floor and an earth brick wall which runs down its centre. It is designed to store heat and is ‘super-insulated’ says Phil. “It works! In the winter it can be 21°C at 10pm at night with no heating.” Phil sourced all the materials including LED lighting throughout.“In 2008 it (LED) was cutting edge. It was $35 per bulb but the bulbs last 20,000 hours. They use virtually no power. I haven’t changed a light bulb in seven years.” 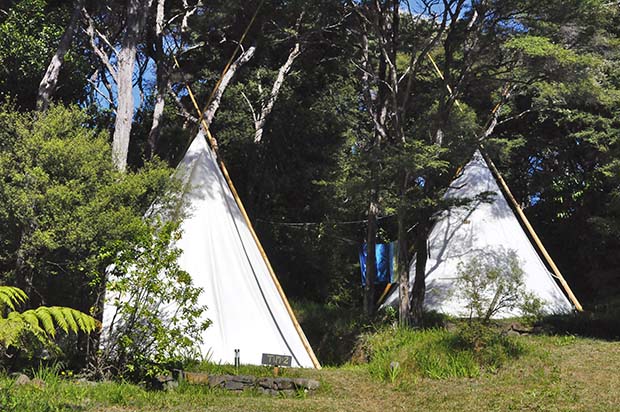 There is no treated wood in the building either. The framing is macrocarpa with Lawson cypress weatherboards. Bio paints were used for the interior and the building is insulated with wool. The furniture was made on-site from recycled timbers, and the furnishings and coverings are hemp. In the same year the couple applied for a grant through the EECA (www.energywise.govt.nz) to install solar hot water systems. There are now six systems throughout the property with a capacity of 2000 litres.

Further ecological light was thrown on the business when they did a sustainable business course through Otago Polytechnic using the ‘Natural Step’ framework. “Any smart business is taking sustainability seriously,” says Phil. “It’s about being at the front of the curve rather than lagging at the back.” Part of the course was identifying one’s ecological footprint and the Otago Polytechnic had just finished a study that identified half of New Zealand’s ecological footprint was food. “We thought ok, we are doing a lot in other areas but all our guests are bringing in packaged, processed and imported foods and we have to deal with the waste.” 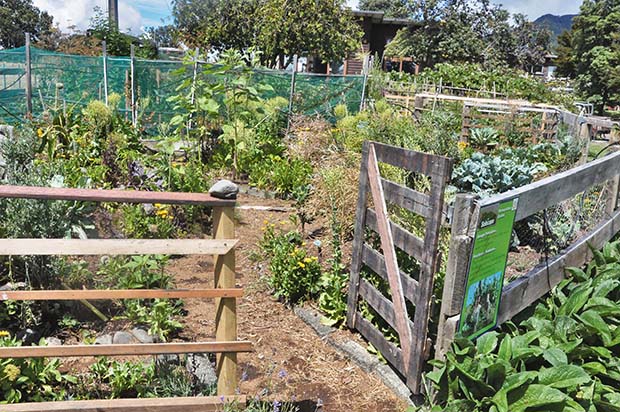 The gardens are based on permaculture principles, with signs explaining the basics to visitors.

That was the beginning of the café. Up until then there was no food offered on the property. It also made good business sense, adding to the experience of guests. The café is vegetarian and sources most of its herbs and about 25-30% of its fresh produce from the surrounding garden, with the aim to increase that percentage.
During his favourite summer at Solscape, Phil took on a different role and says it was wonderful. “I was the gardener! If people wanted to talk to me they came and talked to me in the garden. It was fantastic!”

The permaculture lens Solscape is run through ‘a permaculture lens’ using the three ethics: earth care, people care and fair share, and it affects all their decision-making says Phil. “The whole thing around permaculture is closed loop systems where you’re not leaking resources. It can apply to a business, the economy of a community, a water system – anything really.”Phil says permaculture is a lot more than organic gardening. “It’s a lifestyle – it’s about how we exist on the planet.” In 2009 Solscape ran its first two-week intensive permaculture course and for many on the course, it was a life-changing experience.“It can’t help but be transformational.” Phil is an activist. Alongside developing Solscape, he has spent half his working life with KASM (Kiwis Against Seabed Mining), heading it up for three years. Solscape has provided a balance in his life to “stopping the bad stuff.’’ “Solscape is a creative outlet – it’s about regenerating things.” On his yearly walk-about with Year 10 girls from Waikato Diocese School, Phil asks them questions, like what do they think about the state of the planet.

“They are scared about what the future holds. They know the issues, but they don’t know how to address or explore them, they’re not empowered. The curriculum doesn’t address the issues they know are there.” Usually about half way through the tour, they find some hope.“The pieces start falling in place and for the last half they are really engaged. We talk about Raglan’s world class recycling which diverts about 75% of waste from landfill.”

What started as a two-person dream has evolved into a big operation. In the early days Phil would put up a sign saying ‘Back at 3,’ load the kids in the van and take off to the beach for a few hours in the middle of the day. Those days are gone. Today Solscape is a complex operation, one of the larger employers in Raglan with 6-10 full-time equivalents which translates to 25-30 people on a weekly basis through summer.There are also anywhere from 8-12 people on site volunteering their time. It’s a popular destination for the WOOFERS scheme (Willing Workers on Organic Farms) and they may get up to 10 applications a day. 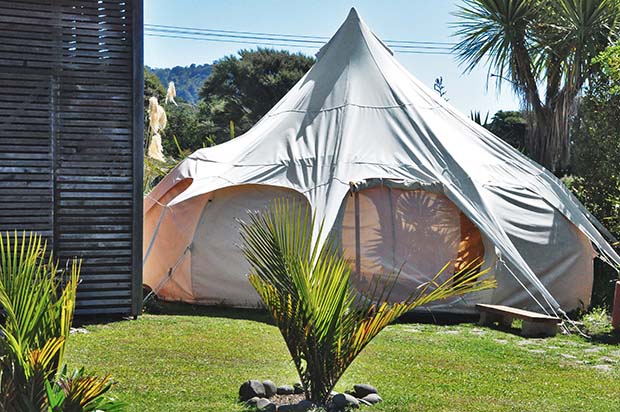 “At some level I miss it (the lifestyle). The loss of that was unintentional. I would advise people to be wary of that. It can quite quickly move beyond a place where it’s fun.”His habit of biting off more than he can chew has resulted in a large loan that’s getting larger. For now, Solscape is in a consolidation phase, buttoning down and getting rid of some of what Phil calls their “big nasty debt”.He’s also aware of the need for a healthy work/life balance and reins in his salaried staff when they exceed a 35-40 hour week. For the last two years, with minor exceptions, he has taken weekends off and always makes sure the family has a good break. But there are no regrets. He describes his time stewarding Solscape as a privilege and an “awesome learning experience.”

More stories you might like:
Magpies, cayugas and Indian runners: How to tell New Zealand ducks apart

Solscape has a worm farm, a slow green waste compost and a hot compost. With contributions from the guests and the café, Phil estimates about 40 litres a day is generated, so hot compost (which requires larger volumes to work) makes sense. The heap is built in a “kind of lasagne method” based on Australian permaculturalist Geoff Lawton’s recommendations of a 75% carbon to 25% nitrogen ratio. “We used to have it 50:50 but it got really smelly.”

Solscape’s earth bag accommodation units were constructed during an earth bag building workshop. The buildings are now the biggest earth bag buildings in New Zealand and Solscape’s most popular accommodation option. “It was experimental,” says Phil. “It was fun and we realised you could build 20m² for under $15,000 including the food for the people that made them.”
Earth bag buildings came out of California and were developed in response to a NASA competition for coming up with a design to build a structure on the moon. “They’re solid, they’re warm and they’re our highest occupancy rooms.”

One of the challenges for Solscape has been dealing with the 9m³ of wastewater produced daily over the summer season. A sophisticated $100,000 septic tank system was designed to deal with it but Phil admits he did not fully understand it at the time it went in. The first time he had problems, Phil ended up in the bush every day for two weeks trying to figure it out. “It was kind-of great, like in a stream as a kid…I was sitting in the bush waiting for water to push through a pipe.”While he describes working with wastewater as something he enjoyed, he says if he were doing it again he would put in composting toilets.“They function well, you get a useful material at the end of it, you use less water, and you deal with the waste water to a far lesser degree.”