How the rare Arapawa Island pig could help biomedical science 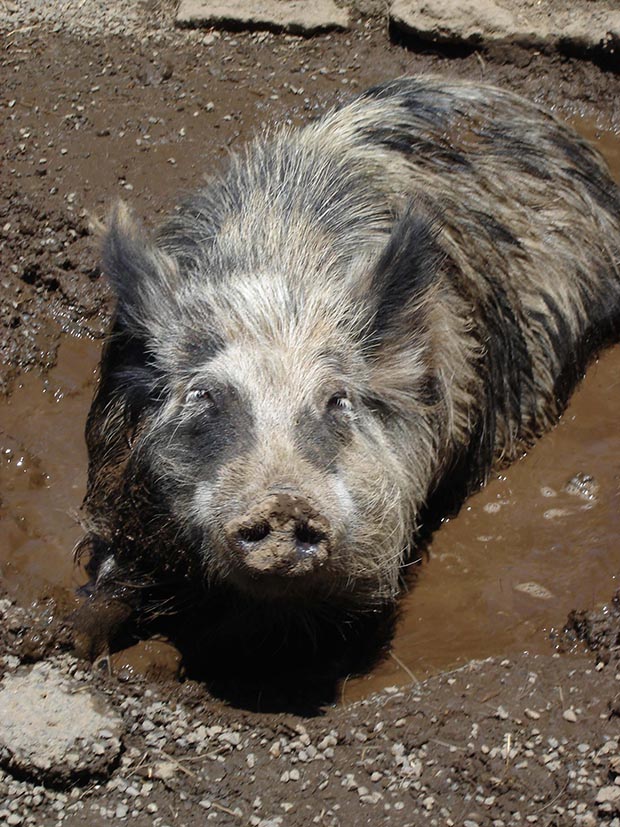 The rarest pig breed in the world is teetering on the brink of extinction, and the few people working to save it would love some help from anyone who enjoys the company of pigs, and a good slice or three of the tastiest bacon around.

Not long from now, rare breeds enthusiast David Hughes will say goodbye to the last of his livestock, and he and wife Patsy will sail off into the sunset aboard their yacht Wharetutu, heading for a life on the seas around the coastline of the South Island.

David has spent much of the past 30 years owning and breeding rare livestock and poultry, but sadly, saving the Arapawa Island pig – the rarest breed of all – won’t be one of his success stories.

“It’s not going to be me who saves them once we’re off on the yacht, but I would hate to see them disappear. My numbers are down to three sows and two boars now, and if someone was willing to offer them a good home, I would give them away.”

The Arapawa Island pig is down to just a few animals in the hands of a couple of serious breeders in the Canterbury region, and is also critically endangered on its “home” island in the Marlborough Sounds. Its true origin is unknown, but the Rare Breeds Conservation Society believes the most likely explanation is that the pigs were introduced by European whalers in the early 1800s. What may make these pigs so important is their 200 years of free-ranging on a remote island, meaning they may carry important genetics that could be useful to biomedical researchers in future, similar to another rare breed, the Auckland Island pig.

That breed was also thought to have been released in the early to late 1800s on the remote Auckland Islands, 465km south of Bluff, but is now a thriving population and worth considerable amounts of money thanks to its pathogen-free status which allow its genes to be used for xenotransplantation in people. Cells are harvested from the pigs (while under sedation) and are now being trialed in breakthrough diabetes research that should see Type 1 diabetics no longer needing to take insulin.

Nothing absolute is known about the DNA or pathogen status of the pigs on Arapawa Island, but the race to at least preserve the breed is gaining urgency with each passing year, after the recent introduction of other pig breeds to the island. These new, unknown pigs will interbreed with the Arapawas, diluting the precious gene pool.

Some of David’s pigs now reside with Christchurch-based breeders Mike and Justine Dodds who run a 20ha (50 acre) block with Justine’s parents, along with their deer herd, horses, a small herd of sheep, their pet Arapawa Island goats, three cows and some chickens. “We’d had pigs before, just for fattening to go in our freezer,” says Justine. “Then Mike read an article in your magazine back in 2009 about this breed, and we happened to see some advertised in our local buy-sell and purchased two boars, one of which we still have.”

Each year, the Dodds carefully choose from the very limited genetics of the breed and raise litters of piglets to sell to other breeders, and for meat.

“We are certainly not making any money from them at this stage, but it is nice to think that we are making a difference in keeping the breed going and hopefully getting others interested in doing the same,” says Justine.

“They make very tasty eating too, especially nice bacon – our local home-kill butcher does a great job with bacon and salamis – which sounds a bit funny seeing as they are a rare breed, but we have to do something with the boar progeny as we can’t keep them all.”

One of their newest sows is cause for great excitement. She was captured by a team of volunteers from the Canterbury Rare Breeds Conservation Society in a foray onto Arapawa Island last year.

The original plan was actually to either trap or – in a worst case scenario – kill a boar and then immediately extract its semen for storage and future use in the Arapawa Island pig breeding programme. No boars were found but the team did manage to trap the young sow who is now living with the Dodds family as part of their breeding programme. 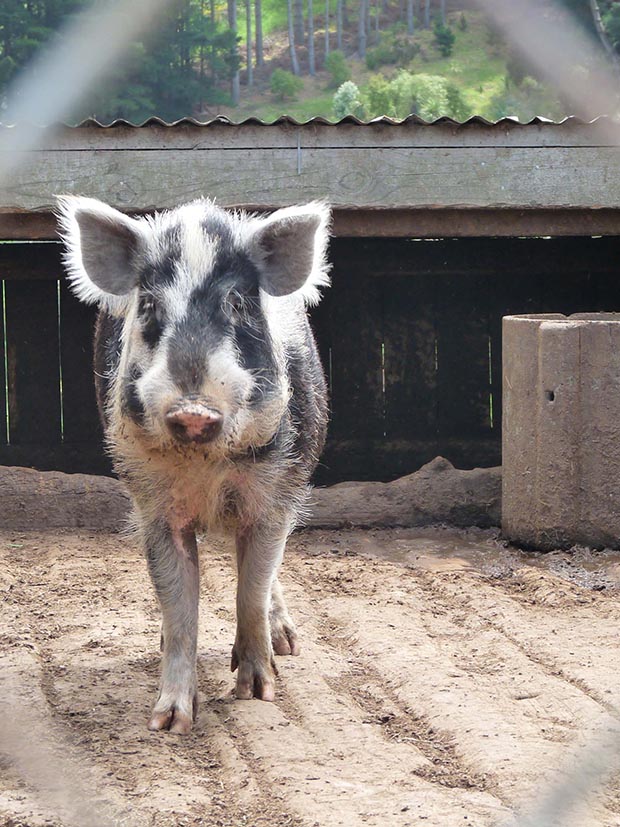 “Mike Willis of Willowbank (Wildlife Reserve) along with the local Rare Breeds members put a lot of time and effort going back to the island at Labour Weekend 2010 along with an enthusiastic bunch of pig hunters and their dogs,” says Justine.

“Greg Mckay (of XCell Breeding & Veterinary Services) went too, so if a boar could not be saved, he was going to store semen. The Society is keen to get new bloodlines or obtain semen as there are signs that pigs of unknown origin have been seen on the island, so the risk of interbreeding is high.”

Breeding Arapawa Island pigs isn’t difficult, although litters of about five are common, much fewer than commercial pigs. However, the mothers have a good success rate, almost always raising all
five piglets.

“I like that they’re rare, it’s special to save a rare breed especially given their tiny gene pool, there’s bugger all of them,” says David.

“They’re a bit special, and they’ve got a great attitude. I had one pig born in the middle of winter, it was really cold and wet and raining and I thought ‘you’re not going to survive’ so I brought her inside and bottle raised her. She looked like the then-Russian President so we called her Miss Putin and we loved her to bits. She’d let you cuddle her, she was a very gentle pig. Unfortunatelyshe didn’t live very long (dying of cancer at the age of four).

“The Kunekune is the kind of pig that’s very docile and while these guys are gentle, they’re not as docile as the Kunekune, they have their own attitude.”

David’s pigs lived in specially-built enclosures due to the steepness of his block on the outskirts of Lyttelton. The Arapawa Island pig likes to dig, something the Dodds don’t mind on their flat stoney land, but it wasn’t as easy for David. “On a relatively flat property you can use electric fences, but on a hillside it was much more difficult. If they dig it up and it rains, all the soil would get washed away so I built enclosures with wooden floors – two inch thick timber – but little bits of food got stuck in the cracks so they would ‘dig’ for it and make holes.

“Their noses are perfect for digging. They look soft, but they’re really solid, they dig into the ground like a plough.”

That ploughing ability isn’t a problem for the Dodds. Justine even ‘gave up’ some of her horse’s grazing so Mike could put in extra pens for their breeding sows, boars and weaners, bringing the total number of paddocks to seven.

“ We have the pigs in small paddocks fenced with sheep netting and then have a line of electric tape around the inside of each pen. Each paddock has a shelter, which my dad Murray kindly built for us.”

While they wait for more genetic opportunities, the Dodds breed their pigs for sale either as meat, or to those interested in keeping and breeding their own Arapawa Island pigs.

“We sell the piglets when they are weaned at about 10 to 12 weeks. They’re a bit slower developing than a domestic pig, so we keep them with their mothers for longer – until she has had enough of them really. A local supermarket kindly gives us vegetable scraps and bread which certainly helps in feeding them all.”

Having spent the past 200-odd years living wild, the Arapawa Island pig is very hardy, and a great option for anyone who wants free-ranging pigs, says David Hughes.

“They do need good solid fencing or good electric fencing, but apart from that they’re not that difficult to look after, they basically look after themselves.

“Pigs don’t get scald or footrot, you don’t have to shear them, I’ve never had a flystruck pig or a pig with footrot, I’ve never had to crutch one! Pigs are pretty much bombproof, you don’t really have to be a great expert to raise pigs successfully and they taste good too.” 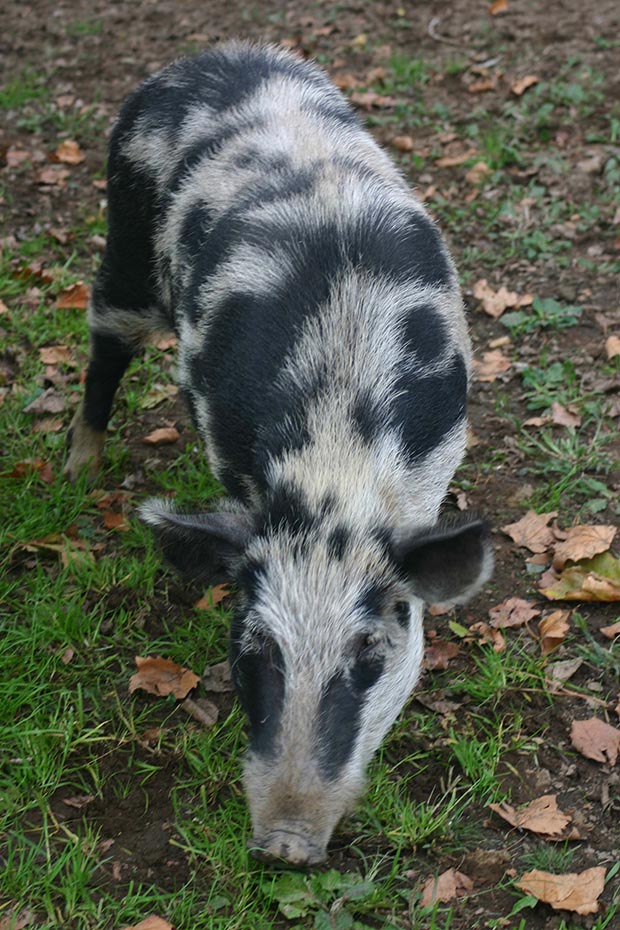 “They make fantastic bacon and salami (people rave about it) and the pork roasts are great. They have coarse hair which means they don’t get sunburnt, and they are a medium-size pig which means moving them from paddock to paddock is easy.

“They are suspicious though and retain their wild instincts, so they’re not the type of pig you’d have for a pet.”

While the immediate future for the Arapawa Island pig is not yet certain, both the Dodds and Dave Hughes are confident it definitely has one.

“They are unique and unusual-looking, and they’re a real talking point with their history,” says Justine. David also believes there is a good business opportunity for those interested in exploiting people’s interest in great-tasting meat.

“Their meat is stunning, and I think if you could get up enough genetic variety to set up a farm and marketed the meat, there would be a good living to be made. The bacon is just magnificent. When I was a lad, people use to eat ‘streaky’ bacon but what we wanted was bacon with meat and not lots of fat.

ABOUT THE ARAPAWA ISLAND PIG The feral pigs living on Arapawa Island are somewhat larger than those from the Auckland Islands, with shorter noses and tails. Many are an attractive tan with black patches but other colours also occur, including pure black.

They’re thought to be similar to a couple of old English pig breeds including the Oxford Sandy-and-Black, or the unimproved Berkshires and Tamworths. DNA testing so far has only been able to confirm they are of European origin.

Size-wise, the Arapawa Island pig has long legs, so it’s taller than a Kunekune, but has a compact frame so while it grows to a reasonable size, it’s not as big as a Large White or a Large Black. David says they don’t go to fat easily like the Kunekune so the meat tends to be lean, and he agrees with the Dodds that it is especially tasty as bacon and pork.

One sow, owned by long-time Arapawa Island resident, the late Betty Rowe, was called Buttercup. Descendants of her piglets, sired by a wild Arapawa Island boar, are some of the precious few Arapawa Island pigs now owned by breeders like the Dodds. 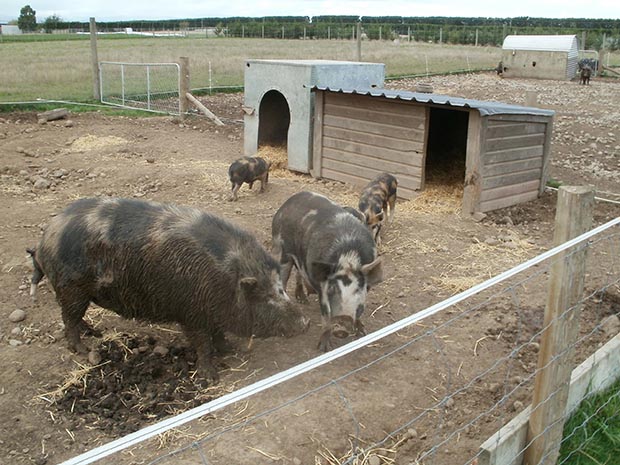 One of the factors that pig breeder David Hughes thinks will be important to the ongoing viability of the Arapawa Island pig, apart from getting new genetics, is getting more people interested in the pigs, especially breeders in the North Island.

“The more people who’ve got them, the better! It’s easy to transport them up, if you can’t get down here to pick them up, then the transport companies charge about $40 to get them across Cook Strait and to your door, it does add a bit but it’s not prohibitive, and they move them pretty fast.”

The Dodds would also love anyone interested in helping the breed to get in touch with them or the Rare Breeds Conservation Society.

“If you are already breeding them and want fresh bloodline, get in touch with us,” says Justine. “And if any hunters visit the island and capture a piglet/s – whether it be a boar or sow – please let us know as the more fresh bloodlines the better, and we would happily take on any captured live from the island.”