Farming life is changing rapidly. But for this Rangitīkei family, the land still has an incredible tug.

Even though Meredith Carpenter had a childhood that might sound idyllic to townsfolk, she never thought she’d end up back in Taihape. Once she left the family farm, made famous by her father Gordon Collier’s Tītoki Point garden, for the built metropolis of London, she felt she’d look outwards forever.

But here she is, married to the farmer next door, four grown children, a garden of her own. And life is turning full circle.

The road to Ruanui Station winds across a volcanic plateau, its rise and fall offering a now-you-see-it, now-you-don’t glimpse of distant Ruapehu. This is not gently rolling paddock, but lumpy countryside, where the morning mist settles into deep hollows and the purposeful ups and downs are a metaphor for farming life with its rewards and challenges. Angus cattle and calves against the backdrop of Ruapehu.

Two great trees — a giant redwood and a lawson cypress — stand magnificent on the lawn in front of the homestead. They were brought in with a bullock wagon by John Studholme, the station’s original owner, who arrived here in 1873 and left a natural legacy.

Andrew Carpenter’s grandparents were the first generation of his family to farm here. He remembers playing beneath mammoth branches and within the macrocarpa rondel nearby, where the trees, planted in a close circle with their trunks leaning in, are trained together to form a tall, hut-like woven hedge with a hollow core. “We used to climb up into it and poke our heads through the top,” says Andrew.

Meredith has a degree in horticulture and has been instrumental in augmenting the two hectares of garden immediately surrounding the home, a bungalow built by Andrew’s grandparents in 1952 that Andrew’s parents extended into a substantial dwelling. One of her fondest memories is of an internship at Filoli in California, a historic country estate with Georgian-style terraces and views of the Santa Cruz mountains.

In Meredith’s time, Filoli was operated by the National Trust for Historic Preservation, and she drank deep of the English-style gardening. Although she retains the rose parterre at the front of the Taihape homestead, it struggles. “It’s a little too cold for roses,” she says. A pair of Sequoiadendron giganteum stand sentinel at the front of the homestead overlooking a rose parterre encircled by a Buxus sempervirens hedge.

The many established trees (think ash, oak, birch, larch, lime, and copper beech) are a dendrologist’s dream. There are hedges for formal structure, and underplanting includes big-leafed rhododendrons, eucryphia, and masses of the unromantically named stinking iris closer to the house. A perennial border alongside the driveway is “our Sissinghurst”, says Meredith, who has dirt in her veins but asserts: “I’m not quite as talented — or as passionate — as my father.”

But the wooden pathway linking the homestead to the dam near the property’s entrance shows vision. “I call it the boardwalk to China,” laughs Andrew. It winds for some distance beneath a redwood stand to run waterside, where wild ducks occasionally join the resident puddle ducks, and the horses come to drink.

Lilly, the couple’s youngest daughter, keeps five horses here. In show-jumping season, Andrew rises early to transport her to the events that have propelled the 18-year-old onto a world stage. “She’s represented the secondary schools’ team at Sydney Olympic Park as well as in New Caledonia,” he says. “Those were two amazing trips.” 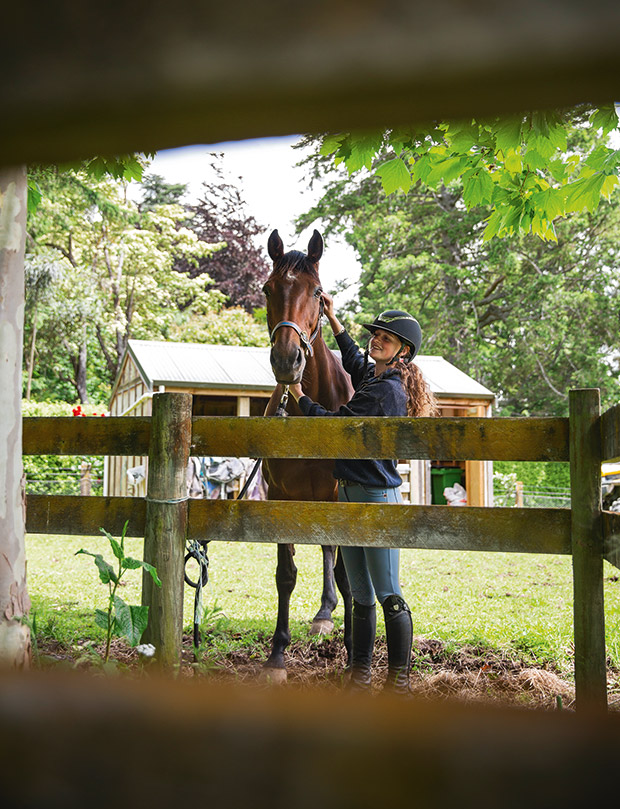 Lilly Carpenter, a former New Zealand secondary schools’ representative, has been itching to get back to competition on her horse, Twerk, but the pandemic has precluded so many events, including Horse of the Year.

While Lilly hopes to take her equine dreams to England one day, horses are also integral to station operations, with the mustering of sheep, beef and deer still done on horseback. “In the 1800s, some Ruanui horses went off with their owners to the Boer War,” explains Meredith. If the horses survived the rigours of the sea voyage and war, they were passed on to the next contingent of men to arrive. It was a one-way trip.

In a traditionally generational business, this tug of the world beyond must be a concern, particularly now that global trends are placing ever more pressure on farming families. Will whānau, like those horses of old, leave and not return?

The current guardian of the land — Andrew — has seen farming morph rapidly in the past few decades: “My role has changed from working hands-on to one of organization.” In breeding romney sheep and angus cattle, he uses state-of-the-art methods to eke out the best value from each beast. While the romneys are bred for growth rates and fertility, the angus are bred for taste.

More stories you might like:
A sweet life in Greytown: The couple behind Mela Juice share the science of blending apples for their newest cider brand

“There is technology now that can scan the eye muscle of the animal; the bigger the eye, the higher the breeding value.” Lean beef with fine marbling is the aim. “Japanese like their wagyu but, blindfolded, I’d pick the angus out for flavour any day,” he says. 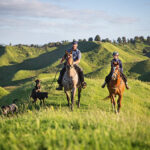 Jeremy and his son Rylee: two generations helping with the muster. 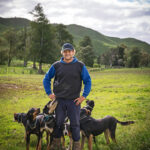 Head shepherd Dyllan Gallien with his team of dogs. 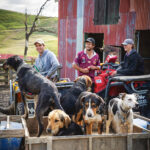 Max Campbell, Blake Marshall and the Carpenters’ son William enjoy some well-deserved beers at the end of a long day in front of the horse stables.

He’s heartened by some good contracts, but the couple operates in an evolving landscape not only at the mercy of the weather gods but of commodity prices. “Some years are tougher than others,” says Meredith. They admit, too, that the movement towards plant-based eating has them a little nervous. “While there’s a place for that, we just can’t grow plants on our hills,” says Andrew.

Lockdown gave them further pause for thought. As China shut up shop due to Covid-19, their market all but disappeared. “Wool prices had been declining steadily, and this was the final nail in the coffin,” says Meredith. She used the time wisely, drilling down into the local wool industry, and launched the Ruanui Station brand of lambswool throws and blankets in November 2020.

“Our lambs are shorn in January, and the wool is scoured in Hawke’s Bay, spun in Wellington and woven in Auckland,” she explains. The soft-as-air blankets are a Kiwi-to the-core product that makes sense environmentally — wool sequesters carbon. The blankets are named after the paddocks the sheep graze in, linking them back to the land. 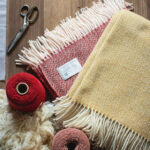 The Ruanui Station lambswool blankets are popular with locals but are also sent overseas via online orders. 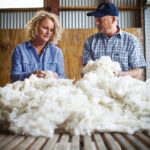 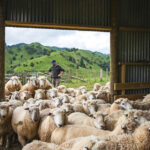 Jeremy with a mob of rams — the best animals for breeding are selected using sophisticated electronic technology. 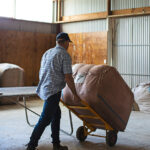 Andrew wheels a bale of wool from the shed for loading onto a truck.

Such provenance is important for a product but also for people. Although the rural population is shrinking, country schools shutting their doors, and few meet their mate at a local ball anymore, there is still strength in the community. And continuity.

When 16-year-old William comes home from boarding school, he cannot wait to jump on his dirt bike and help the shepherds with feeding out. He’s already talking about getting a sheepdog.

“It will be interesting to see how the next generation of farmers responds to the times,” says Andrew. While business methodologies will undoubtedly alter, memories are immutable for the boy who made a bow and arrows from bendy willows down by the swimming hole and fell in love with the girl down the valley, who did not wander far from her father’s garden for long.

The first European to venture onto what is now Ruanui Station was Reverend Richard Taylor. In 1860, together with 100 Māori, he journeyed here via the Whanganui River, across the Waimarino Plain and down the nearby Turakina Valley. He recorded the visit in his diary, writing: “We reached a little kāinga called Ruanui.”

John Studholme, along with his wife Lucy, was the first settler to put down roots, acquiring an interest in the land in 1873. His son Joseph and wife Eliza followed in 1890.

Although the property was isolated, the Studholmes were supreme hosts. Honourable guests included the Earl of Onslow [New Zealand’s governor-general from 1889 to 1892], an event commemorated by the long, tree-lined driveway on the property known as Governor’s Drive. Today, an ash tree some 40 metres tall still stands at the head of the driveway.

Poet Rupert Brooke, once called “the most handsome man in Britain”, was a one-time guest, as was English-born artist CN Worsely, who made the trip from Gisborne in the summer of 1912 and painted many scenes of the garden and house.