The four parents (from left) Clinton and Rodney, Erin and Emma with Hazel. The pond stands at the bottom of the men’s 2.5-hectare property overlooking Blueskin Bay at Waitati, 15 minutes north of Dunedin’s Octagon.

Ask Rodney and Clinton and Erin and Emma… They’ll tell you it’s love that makes a family, not just blood ties.

If it weren’t for the fact that they both bat for the other side, Clinton Chambers and Emma Homerlein would probably have married each other years ago and raised a family together. 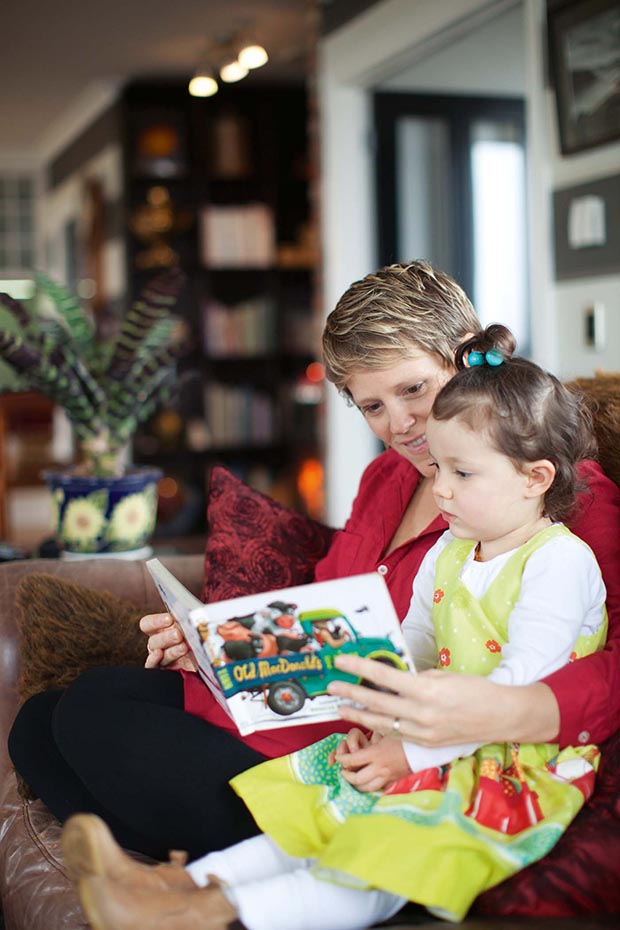 As it is, they are bringing up their two-year-old daughter Hazel Kowhai Patricia Hoover together with their respective spouses, Emma and her wife Erin Hoover, Clinton and his husband Rodney McDonald. And there is the hope that they will produce a sibling for Hazel before 2017 is out.

This story began in 1984 when Clinton, the only child of a single mother from Featherston, went to live with his aunt and her family in Brisbane because his mother was not well. He and Emma met at their local Catholic primary school and began a lasting friendship. 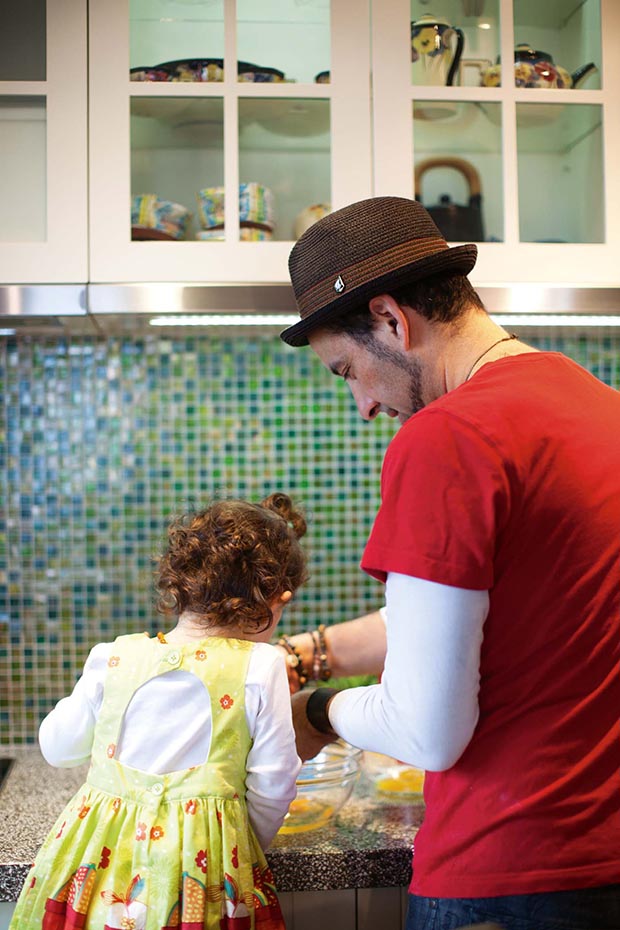 “Emma and I were like peas in a pod,” Clinton says. “We were almost inseparable to the point that when we were still in high school our parents more or less thought our life path was already determined.

“In fact, my mother approached Emma’s parents and said she wanted to talk about us getting married because we had discussed the possibility of traveling overseas together. My mother came from a deeply conventional religious background and felt that things had to be done in the proper way.” 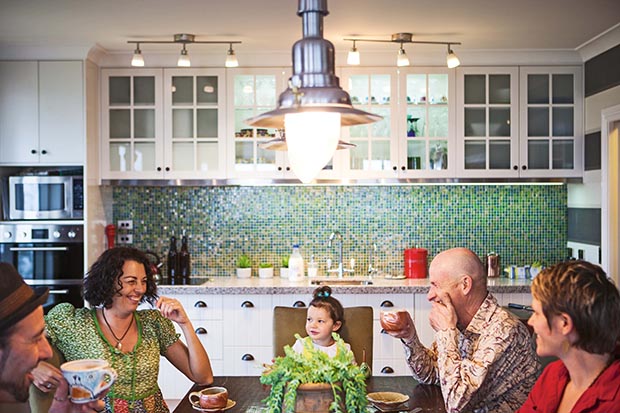 Emma, Erin and Hazel live in Brisbane and the two couples have a holiday at one or the other’s home twice a year – most recently at the men’s home near Dunedin.

Clinton moved to Melbourne after high school and the first time Emma visited him he poured her a glass of champagne and declared that he was gay. “I know,” she said. But it took her another two years to be able to make the same announcement about herself. 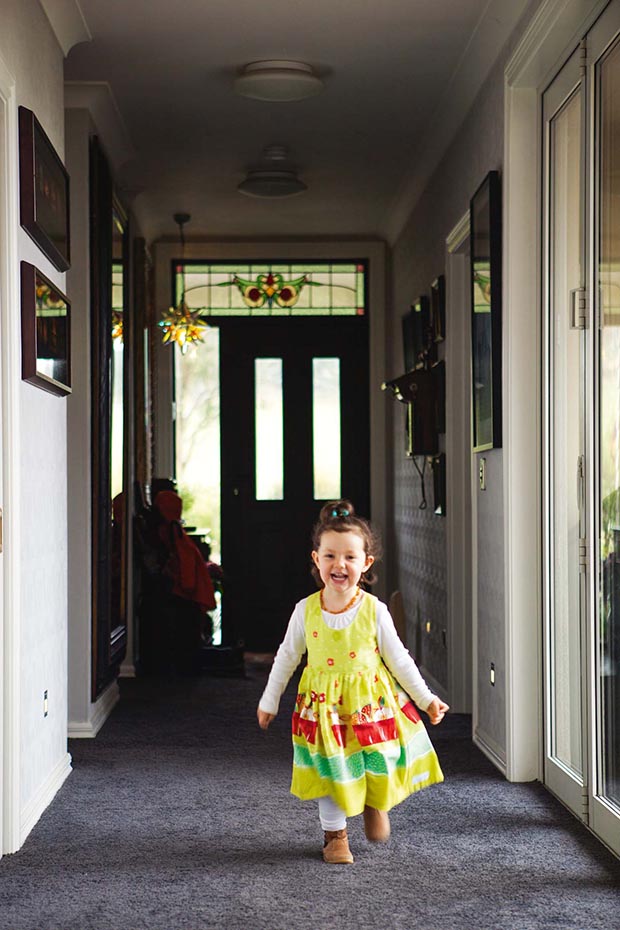 Hazel running around happily in her Dad’s home in Dunedin.

After several years working in the Melbourne hospitality industry, Clinton moved back to New Zealand and while spending time in Invercargill he met Rodney online.

More stories you might like:
How a small dog called Bluebell introduced Sally Maguire to the love of her life Helmut Hirler

Shortly thereafter they moved to Dunedin and married in 2010. 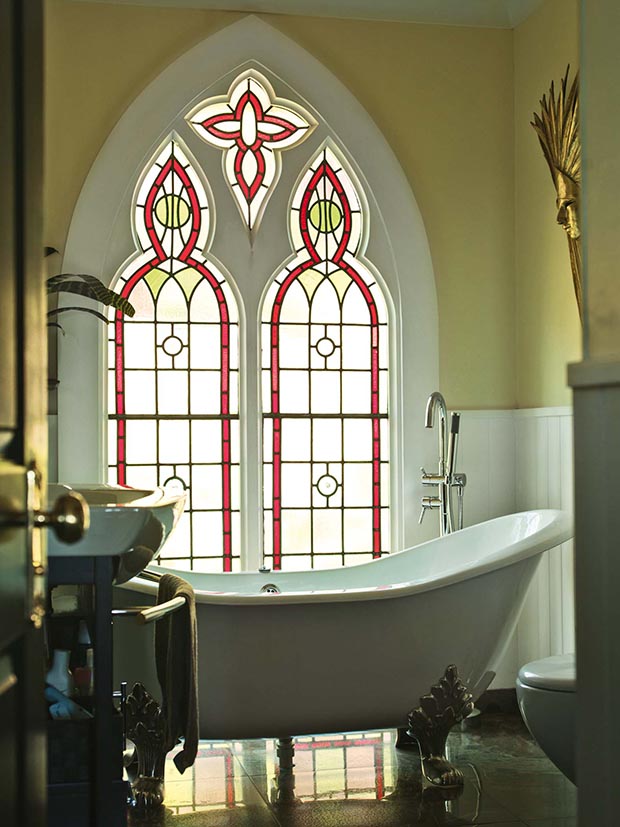 Meanwhile, Emma’s work as a primary school teacher took her to England, Japan, Hong Kong and Bangkok where she met Canadian Erin, whose career path had followed a similar trajectory. They fell in love, got married in Thailand in 2007 and then went to Canada to confirm the legal marriage registration.

At the same time they began talking about having a baby and teasing out how that might work. As they intended to make their home in Queensland, where their marriage was not recognized, they were not able to adopt a child in that state. 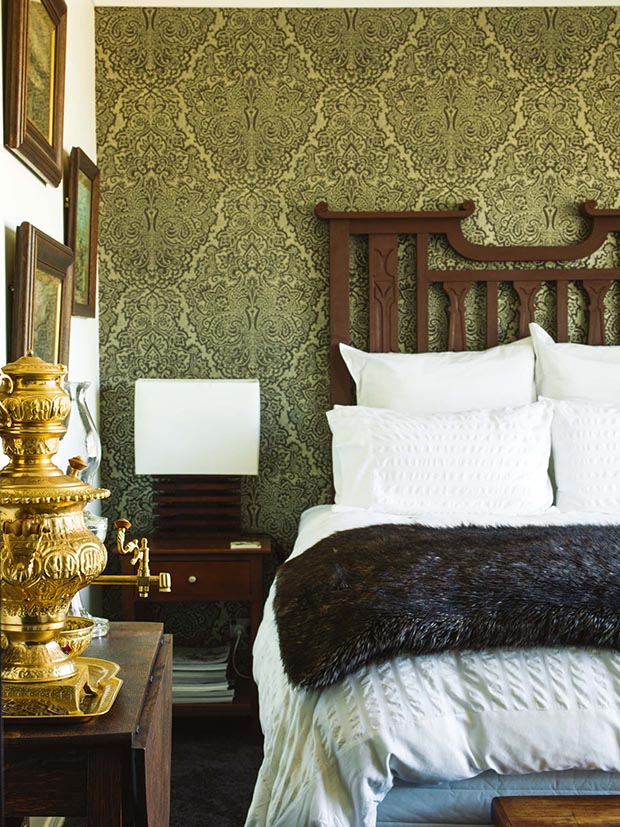 “Clinton was always the obvious choice as a donor/father because he had always been part of my life,” says Emma. “And it was always a given that if our child was going to have daddy Clinton in his or her life there would also be daddy Rodney.

“We needed someone we could trust entirely, someone who recognized that while we would be an extended family, Erin and I would be the legal guardians and parents. We would make the big decisions like where we would live. We wanted our child to know her father and his heritage but there was no assumption that Clinton and Rodney would support us financially.” As a child, Rodney wound his grandparents’ clock every week and was thrilled to find the same make and model when scouring antique shops to furnish his own home.

Being a father had not been on Clinton’s radar at all. “It was not something I had given any thought to until the girls approached me about it. But I was quite flattered – even honoured – that they would consider me for such a thing. I was more than happy to help.

More stories you might like:
It's a small world: How Rio Cox creates people, potted plants and interiors at 1:12 their size

“As for the life-long commitment with my own child and the girls – again, it seemed like an honour. Emma is my closest friend so it’s just an extension of an already life-long friendship. We have always traveled regularly to see each other. Now Hazel [born by caesarean in 2004] gives us all the more reason to get together at least once or twice a year.” 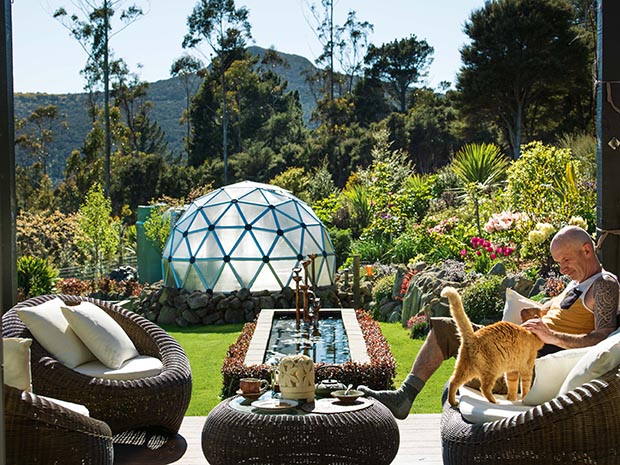 A sophisticated greenhouse, was a wedding gift from Rodney’s parents.

As for how it’s impacted on Rodney: “I feel the whole experience has enriched my life,” he says.

“Deep down I’ve always wanted to be a father but just put it out of my mind because I couldn’t see how it could ever happen. Now that it has, I’m just delighted and very grateful for it.”

There was never any doubt that Erin would be the one to carry and give birth to the baby. “I’ve always wanted a whole basketball team full of children, although I’ve re-thunk the numbers now,” she says. 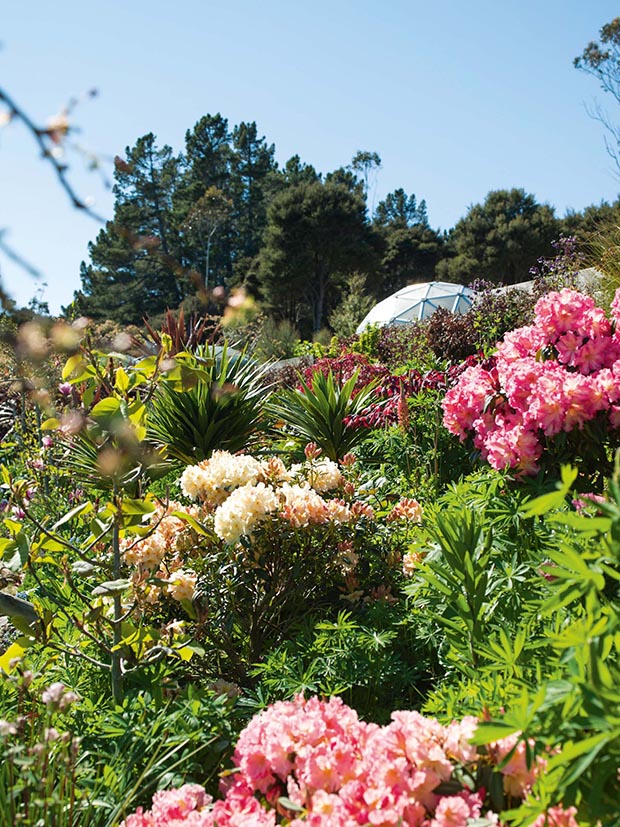 The biodome is positioned among the dense plants.

Erin is the stay-at-home mum and she loves it. She does the baking, takes Hazel to play group and the library, makes play dough, paints with her and does all the things that Emma says she might not have the patience to do.

Erin has returned to Canada to visit her family every year since she left in 2003. 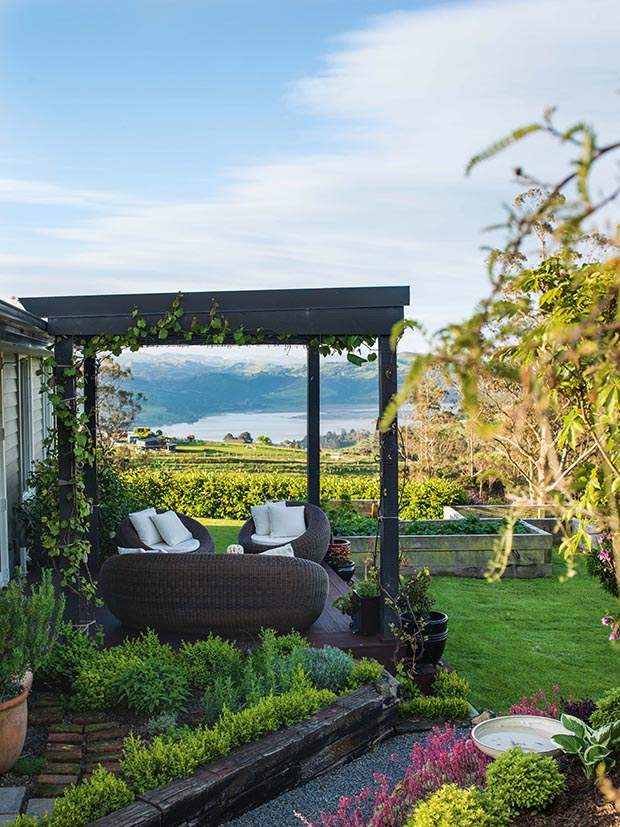 The deck offers a view of the property and over Blueskin Bay.

“I have a very big extended family. When I met Emma we both knew that we were meant for each other. I took her back to Canada for a summer and she met everybody, which was interesting as I had never had a female partner before. It was only when I met Emma that I knew I was lesbian, although I’ve never really believed in that label. It’s a matter of who you love and it doesn’t really matter whether they are male or female.”

More stories you might like:
Meet the family who kept their 1970 Datsun 240Z in California for three generations

In true Canadian style, Erin’s family was sanguine about getting to know Emma, and the prospect of the girls having a baby together. 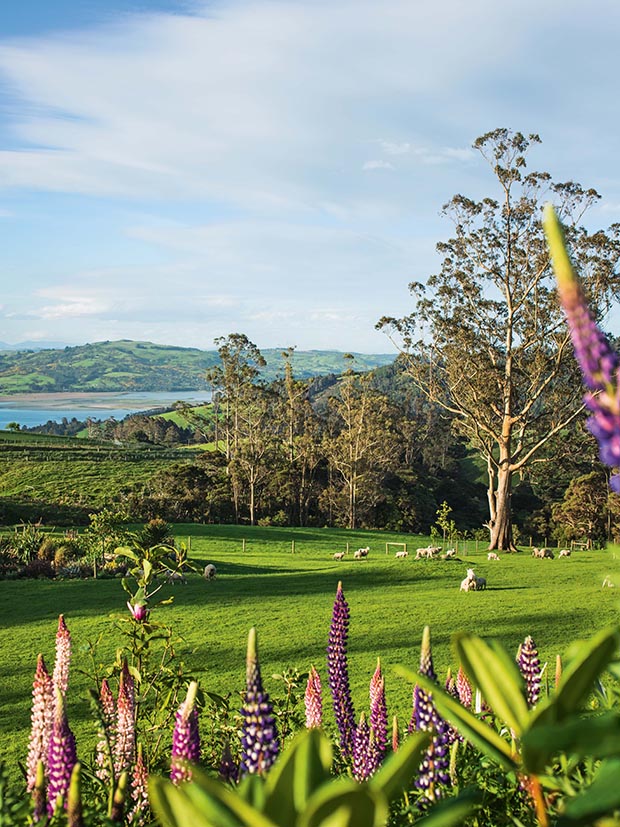 A landscape gardener by profession, Rodney has created farmland, native bush, waterways, a kitchen garden and dense plantings around the house so that the property seems much larger than its 2.5 hectares. rodneysgarden.nz

“There were no dramas in the family about the fact that I was with a woman and they’ve always known that I wanted children, so all of that came as no surprise either.”  Says Clinton:

“At first it was difficult for both our families to accept ‘gay’ sons. However over time they have embraced us for who we are. By being true to ourselves it has brought our families closer together, including our new extended family. Erin and Clinton with Hazel.

“I don’t think that parents should ever make assumptions about how their children are going to turn out. Our parents certainly didn’t expect this.”

The two couples agree it’s love that makes a family, not blood ties alone. They have found that people are surprised but usually quite accepting of their family arrangements. And, says Rodney, “most people think it’s amazing. We just explain that we are a modern family.” 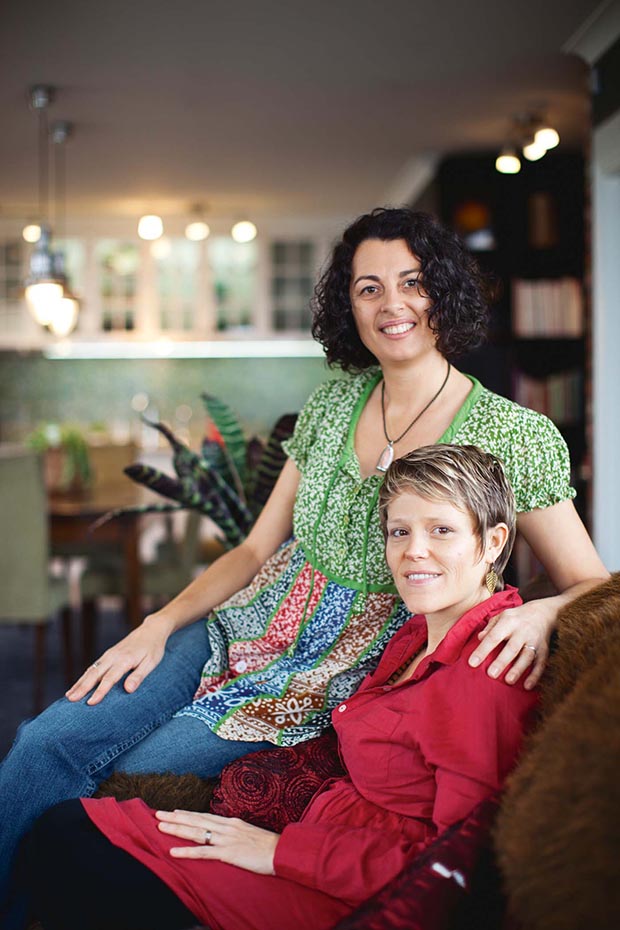 ♥ The couples’ journey to conception took nearly three years, and in each successive year they trialed a different technique. Doing it the “natural way” just wasn’t an option.

♥ At first the two couples and their friend Paulie spent a weekend to remember in Byron Bay where they followed the instructions on a home fertility kit, which involved a number of vials and something that looked like a turkey baster. “Paulie was running back and forth making everyone cups of tea,” says Emma “It was screamingly funny.” But it didn’t work.

♥ Then there was a round of IUI (intrauterine insemination) in the hospital in Dunedin. That’s where the female partner’s blood is tested every day to ascertain when she is ovulating and the sperm is then inserted into the uterus through the cervix. That didn’t work either.

♥ Finally Clinton flew to Phuket to deposit semen to be frozen for a round of IVF treatments and baby Hazel was conceived.

♥ Now, five years after they first began the process they are trying again and hoping for a sister or brother for Hazel. 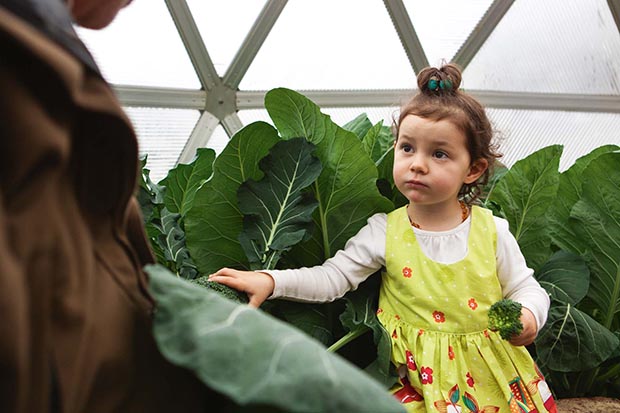