“Where are the snake beans?”

A bucket-carrying, Indian customer intercepts Shane McCulloch as he tries to restrain a rush of enthusiastic customers. The car park is full and still they keep coming. Some have driven an hour to pick the traditional vegetables and they are very focused. There is a buzz of chattering and excitement as they trawl the rows for the specific tropical vegetables they love to cook with. We could be in India. Long, grooved luffas and warty bitter melons hang from triffid-like vine canopies. Hidden at the back of the greenhouse – so Shane can manage supply – are the much sought-after, 60cm-long, thin,snake-like beans. 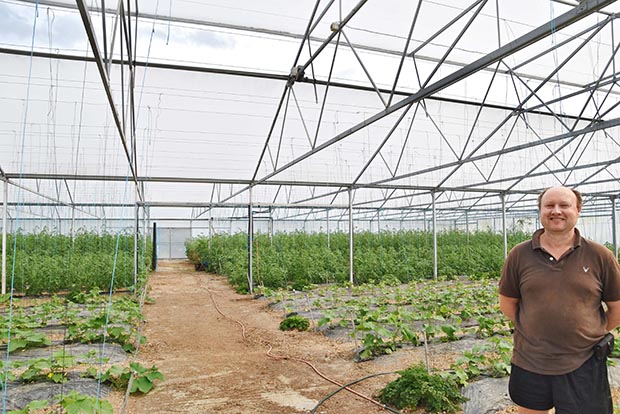 Shane in one of his greenhouses where veges are carefully monitored so customers get their produce at the right time to suit their traditional recipes.

“The Indians call it the snake bean, long bean. They pretty much go ballistic over them.”

In another row, hotter-than-hot bird’s eye peppers beguile you – at your peril – to touch them.

“These are about the hottest you can grow economically. I have the milder chilli – the Indians call them ‘Kiwi chillis’ and they don’t touch them.”

This is all tucked away in a back section in residential Whanganui. No-one would know a market gardener was there and Shane doesn’t advertise it. But then he doesn’t need to. One look at the car park and it’s clear his customers are finding him on their own. 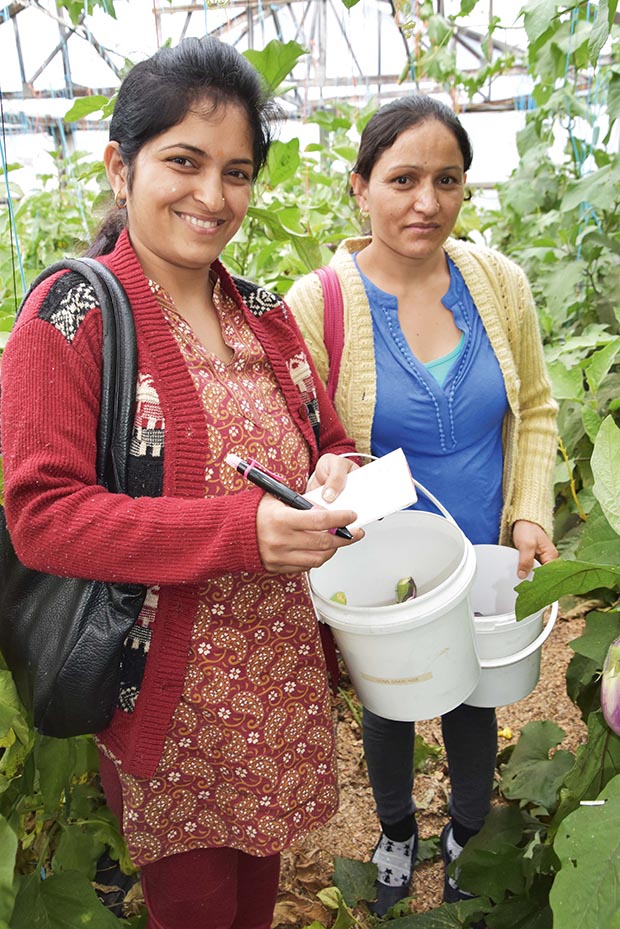 He tells how a Filipino woman posted what she had bought from him on Facebook. The next afternoon four carloads of Filipinos turned up. The previous weekend he had a group from New Plymouth, two groups from Hawera, one from Palmerston North, and one from Otaki, mostly Indian, some Thai.

“They were all coming to pick stuff they can’t get. They can get them in Auckland but not in this area. I had cars stacked everywhere. It was absolute mayhem.”

Shane’s journey into Asian vegetables started with chillis. He had always had a few growing and every year a few more customers would find out about them. One day a customer suggested he grow bitter melons. 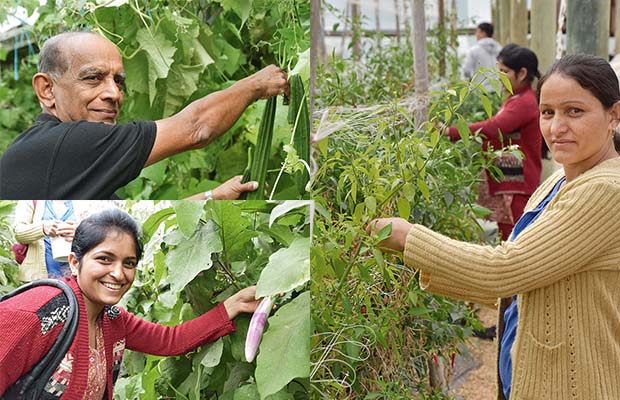 Shane has found his customers – many of whom come from India like Deepika (left) and Sona (right) – want to pick their own because the age of the vege has a big bearing on how it flavours a dish.

“For the first season I only grew a tiny section of the greenhouse. I didn’t tell anybody. The first Indian lady that asked if she could pick chillis, spotted the melon and said, ‘How much?’ She instantly recognised it.”

More stories you might like:
A Miranda couple turned an old citrus orchard into a productive garden, café and gallery

Shane was encouraged by the demand to try another couple of varieties the following season, and things started to grow.

“I pretty much started firing things in the ground and seeing what would happen.” 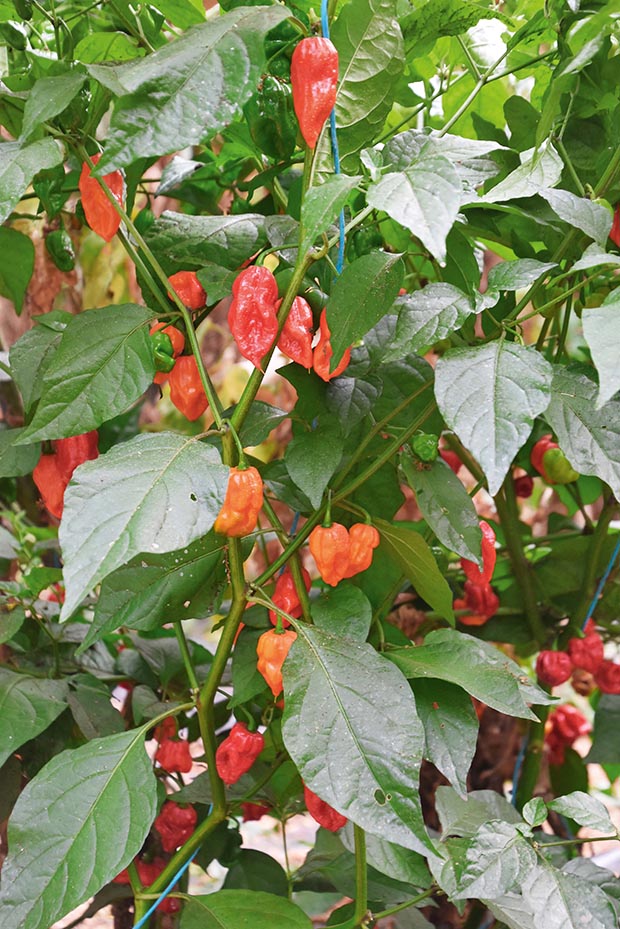 “It’s supposed to be the fifth hottest chilli in the world. One guy said his finger didn’t stop burning until the next day and even two days later he could rub his eyes and it still hurt.”

An Indian friend gave him some curry leaf plants to ‘look after’ a few winters ago. After languishing in pots without results, Shane planted them and now has a small tree. One of his customers, a restaurant owner, told him when they are added to cooking, whole rooms fill with the scent. 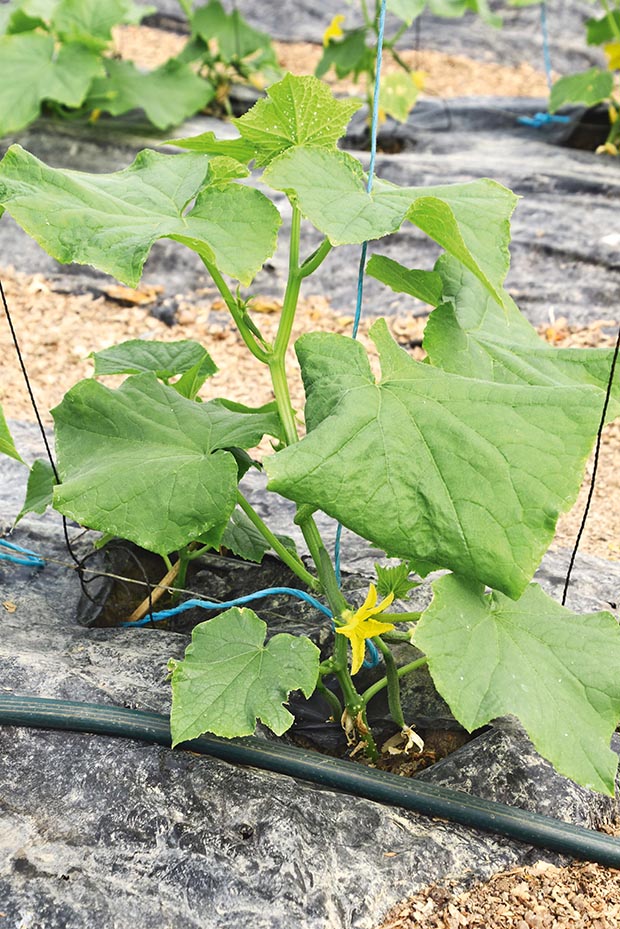 “I learnt my lesson from that. Next year they will be getting their own bay/area.”

He’s also discovered that luffas are exceptionally heavy feeders, and that buying from Chinese language seed catalogues is risky.

“When I thought I was getting sucre melon, I got something else because I couldn’t read Chinese. As far as I can tell, I think it is sponge gourd. It’s a solid little bugger – I hit my head on it every time I walk past.” 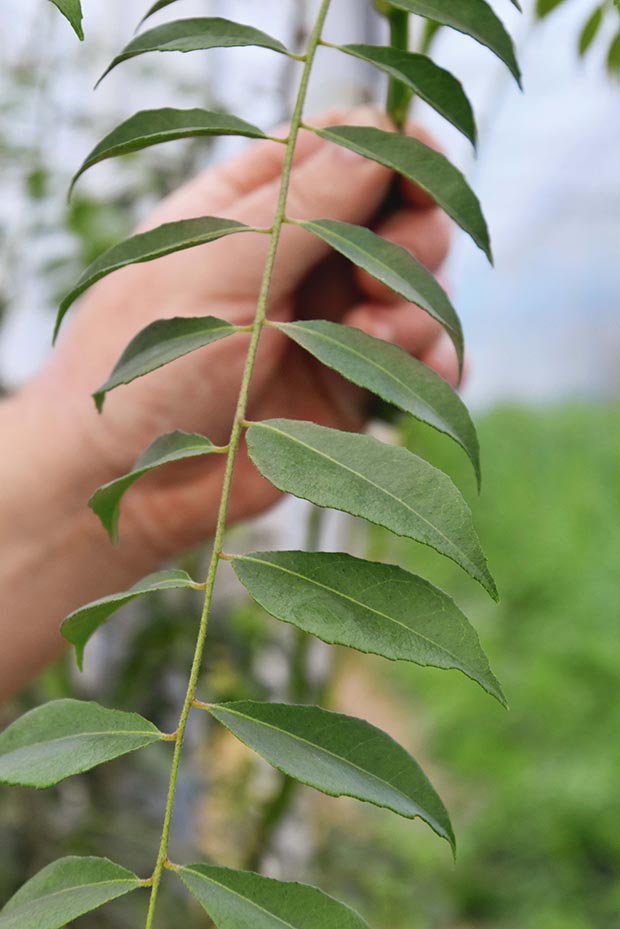 Crops in short supply, like the snake beans, have to be placed out of bounds and rationed. Shane had to save a bitter melon by covering it in netting and labelling it so NZ Lifestyle Block would have one to photograph.

“Trust me, a note would not be enough,” he stresses. “If they (the vegetables) are there, my customers will find them.” 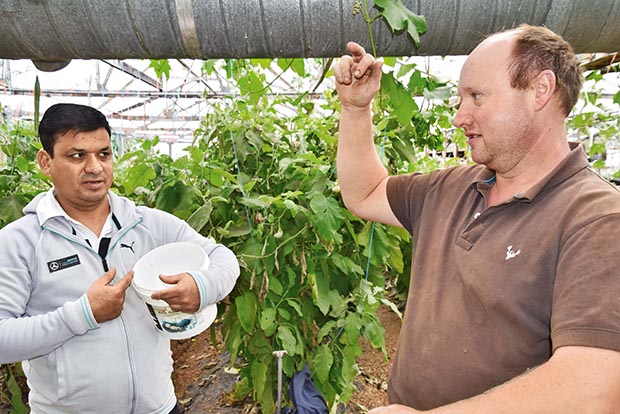 He has noticed that different cultures like their vegetables picked at different stages and use them in different ways. Indian customers like their luffas younger. If he is not careful, the young crop can be picked out and there’s no larger, older fruit available for other pickers.

But every now and then, he needs to go through the crops to take out the larger fruit which have not been picked.

“When I pick stuff and put it in the chiller, even if it’s cheaper, some people still prefer to pick their own. If they’ve picked it, they know it’s fresh.”

Working out what customers want can be interesting as the different cultural groups have different names for the vegetables. He shows customers the pictures in his Asian seed catalogue – his main seed source – to help him work out what they want. “I say, ‘If you spot something you like just label it and I will see if I can grow it.’”

Last season, based on suggestions, he grew haired gourd and the large-fruited bottle gourd, one of the first cultivated plants in the world, which were once used as water containers. Both were very popular.

Shane keeps records of all vegetable sales and based on these says next year he will be trimming his tomatoes back to two bays, giving the luffas a bay of their own, doubling the bitter melon area, tripling Fijian eggplants, and probably putting in four full rows of snake beans. His flatmates are helping him to develop a Facebook page so he can communicate with his customers. Service with a smile, Shane doesn’t advertise and he doesn’t need to.

It’s a seven-day-a-week vocation most of the year, reflected in the six month backlog of unread growing magazines awaiting his attention in the smoko room. Between running his greenhouses and developing new crops, he doesn’t have much spare time for taste-testing out crops himself. He has stir-fried luffa.

“Zucchini was the closest taste I could think of.”

One of his customers brought in a dish made with bitter melon.

“I can’t say I’m a fan,” he says diplomatically. “It’s an acquired taste.”

Shane caught his love of gardening off his grandad and followed it up with two years at polytech. His only regret is that his beloved, green-fingered grandfather did not get to see this property as he died a year before he started working there.

“He would have loved this place.” 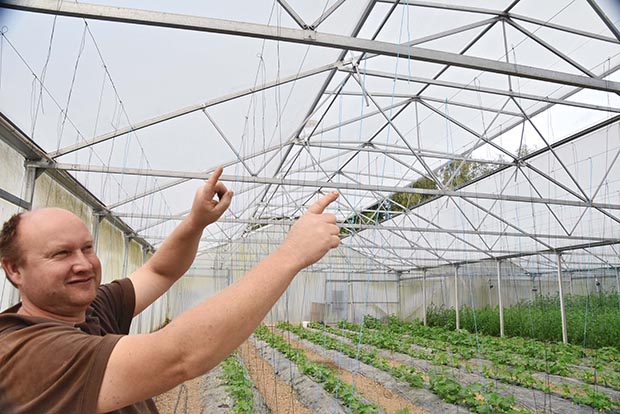 THE CROP-MAKERS
Shane has three large greenhouses. Two are 2000m² greenhouses and a newer 1600m² house with ridge vents which he built kitset-style. They are all unheated, so most of his crops are finished by May/June.

The warmer autumns over the last few years have enabled Shane to carry crops a bit later. The springs have been cooler, but with fewer frosts, he has been encouraged enough to try marginal crops like okra.
Over winter he rotary hoes sheep manure into the soil, covers it in black plastic and lays sawdust on top, which is later recycled. T-tape irrigation supplies water to all the plants. 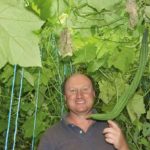 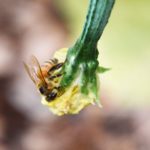 The lure of luffa plants proves too enticing. 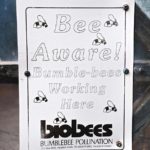 The bees love of luffa is resulting in amazing yields for Shane. 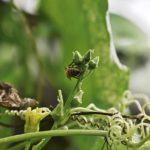 There have been unexpected bonuses. His luffas brought customers and honeybees! Honeybees don’t work well under plastic, so it is usually necessary to bring in bumblebees to pollinate crops.

“Honeybees can’t navigate in the greenhouse like bumble bees can. But luffa (or loofah) brought in honeybees galore. No other crop has ever brought bees in like this.”

Even on an overcast day, the small curcubit-type flowers are abuzz with honey bees, darting around the long grooved luffas hanging from vines. 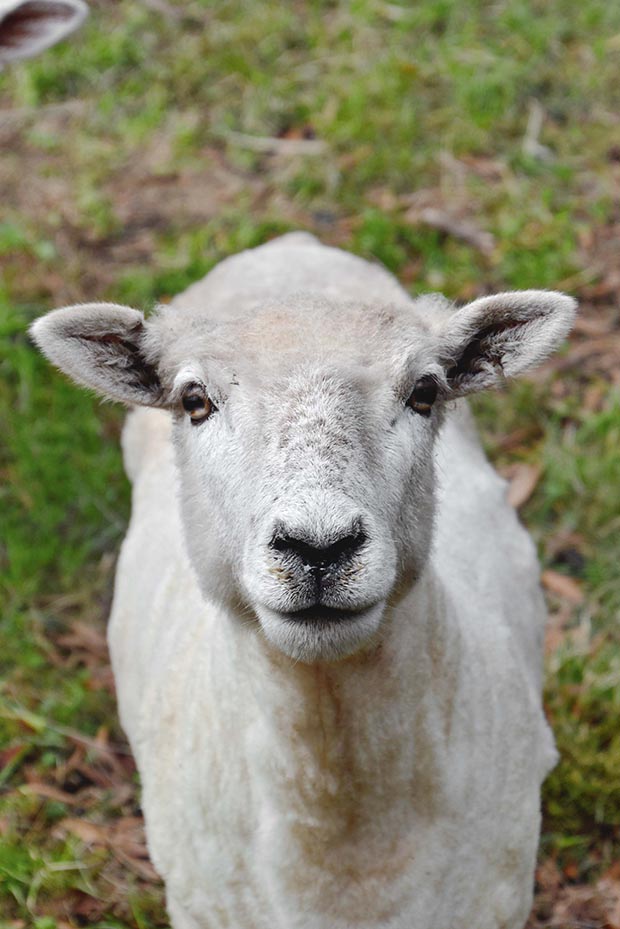 When the ride-on mower died, that was it.

“I let the sheep take over lawn-mowing! At night I lock up doors and just let them out to graze around the greenhouses.”

In the winter he admits to getting a bit lax. One time he turned up and his sheep were gone.

“Gee, where’s my sheep. I hunted the whole boundary and thought, ‘someone’s stolen my sheep!’ Then all of a sudden I saw a white shape moving in the greenhouse.”

The doors had blown open in the night, the sheep had got in, then the doors had blown shut after them. When Shane found them, they had chewed out the beans – strings included – and were feasting on the parsley.

“I thought if I left the door open they’d wander out, but it took four or five days to get them out. They were enjoying it, they wanted to stay.”

At the end of the season Shane rips out the tomato plants to the delight of his well-fed sheep, who will munch on the unpicked fruit for days.

The flock is made up of Romney-Southdown ewes, prodigy of a fine-looking ram that turned up on a mate’s hillside, badly in need of a shear and lame with footrot. According to Shane, his sheep scoff everything, especially his orchard feijoas which rarely get to hit the ground.

“I’ve seen them stand on each others’ backs to get them. Beans are the favourite – beans are the ultimate.
“They’re not so keen on bitter melon.” The clue might be in the name.

WHY SHANE DOESN’T GROW MANY TOMATOES ANYMORE
Shane cut his commercial teeth as a tomato grower for nearly 20 years, working for the previous owner for four years before buying the property.

His journey into Asian vegetables was prompted by his increasing frustration battling the devastating psyllid (Bactericera cockerelli) on his main crop, tomatoes.

Psyllid was first found in New Zealand in 2006. The adults look like miniature cicadas and the nymph are flat, scale-like insects. Damage is caused by the nymphs and adults, which feed on leaves and also transmit a bacterial disease, Liberobacter, which is believed to cause diseases such as psyllid yellows which drastically affect yields.

“You can control it but it requires heaps of spraying,” says Shane.

“I got sick of battling it.”