With the arrival of hot water and some imaginative use of cling film, the level of luxury in life off the grid moves up a notch
Issue #56  July/August 2014

Recently James and I took what’s known as a Great Leap Forward in our life on the land. There have been several of these since we embarked on our offgrid existence, including raising the roof on our future house, shifting from the caravan into our first room, rigging up a solar panel (there’s nothing romantic about squinting by candlelight) and semi-enclosing the outdoor kitchen.
Each Leap’s been accompanied by a steep rise in our level of comfort and the latest is no exception. During guided tours of our property, family and friends are now led to what will one day be the bathroom, where James twists a tap with a flourish. “Feel it,” he insists, beaming as people politely enter their hands into the cascade steaming from the shower. “Instant hot water,” I reinforce and we gape like a pair of astounded cave dwellers at the miracle before us. Sadly, however, to those who’ve never gone without it, watching warmed water flow at the turn of a tap doesn’t garner much enthusiasm. As James and I can testify, it takes three years of fire baths and nakedly splashing about with cups of hot water in winter winds to guarantee a deep and lasting appreciation for a good hot shower.
If we’d known about gas califonts when we first set up camp in the forest we’d have skipped the lesson in deprivation and bought one at once, perfectly happy to spend our lives taking hot running water for granted. Instead, our plan was to add a solar hot-water system once the house roof was erected but at that stage we were told it would be smarter to run an electric hot-water cylinder off a complete solar or hydro-electric scheme, which we won’t install until our house is complete. 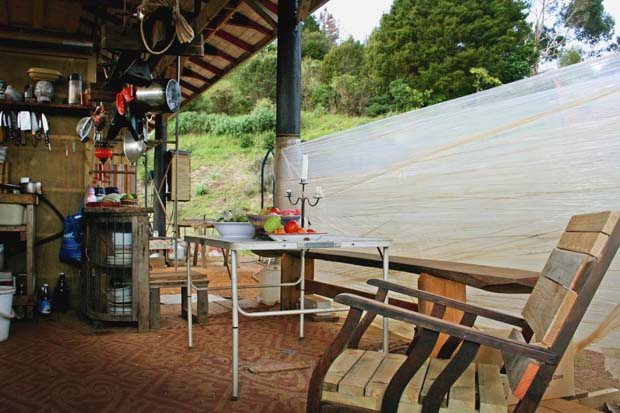 We purchased our califont on Trade Me, looking doubtfully at its slim instruction pamphlet. “It’s very easy to set up,” the seller reassured us, before taking our money and laughing his way into the sunset. It wasn’t. On numerous occasions, James summoned me to the new shower where I danced with anticipation as he turned the tap. Each time our faces fell as hot water didn’t. Then it would turn out we lacked this piece of plumbing apparatus or that certain crimper and another lengthy trip to a Kerikeri plumbing-supply shop would ensue.
So on the day when hot water did eventually flow, suds massed and our rejoicing rang through the land. Much to James’ astonishment, however, I still wasn’t satisfied. “What do you mean, you want walls round the shower?” It wasn’t a modesty issue – we can hear approaching cars long before they arrive and bush etiquette requires neighbours always shout a hello before they come into view. No, it was the wind-chill factor I wanted to reduce, something to which James seemed impervious. With a number of other building projects on the go, I could tell my request was of low priority, but although my building skills aren’t up to much I had a plan up my sleeve.
When we first moved into our caravan, an uncle revealed an eccentric bent by inexplicably sending us a giant roll of caterers’ cling film as some sort of gift. One afternoon before our room was built, when James was off shovelling clay for mud-bricks and the wind was whistling into the outdoor kitchen with particular savagery, I turned from the blown-out gas ring in exasperation and, with a stroke of genius, seized upon the cling film. Running back and forth between two house poles, I wrapped the cling film round and round and formed a strong, translucent wall that’s been there ever since, withstanding storms, summer sun, puppy aggression and a two-year-old armed with scissors.
Half a roll of this building material still sits unused, perfect for a temporary shower box. Admittedly I haven’t quite figured out what to attach it to but I’m confident inspiration will arrive before the worst winds of winter.

In the next post, James builds a pizza oven, Gentleman Bob comes to wwoof and Polly takes up midnight gardening.