A welcome reminder from an unwelcome intruder


In the first of her fortnightly blogs,  NZ Life & Leisure columnist Polly Greeks shares an update of life in her mudbrick off-the-grid home in the Far North. This week, an unwelcome intruder puts life in perspective.

25 May 2016
Recently I had one of those moments in life when the whole world suddenly drops away. I was on the phone, wrestling with 19-month Zen for its possession when the doctor’s voice announced that my biopsy had tested positive.

‘You have a cancer.’

Zen slithered from my hip to the floor.

Registration hit me in the stomach so forcefully; I was literally winded. Who knew a word had such power?

The answer is, of course, millions of people. It’s a diagnosis that must be delivered countless times daily and I imagine it detonates within the minds of those affected like an atomic bomb every time.

My skin cancer was one of the good ones. A basal cell carcinoma.

‘So it’s nothing to worry about?’ I heard myself pleading.
Well no. It would still need removing. As I pressed the phone to my ear, listening to the doctor explain the procedure, I watched James watching me and felt my lower lip start to tremble. Wise men and women have said humans would do well to remember their mortality constantly. That knowledge of life’s brevity can keep one more alert and mindful of each passing moment. 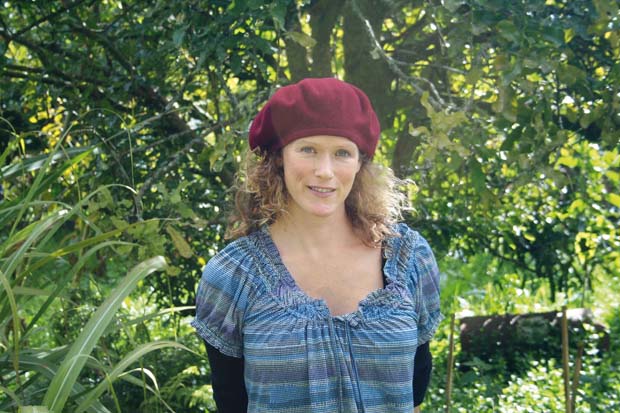 It was a 2cm mole and according to Google, its type is slow spreading and rarely aggressive but it sat like the Titanic upon my brow for the five weeks until surgery.

I tried to be more patient and kinder with the children. If the laundry didn’t get folded and put away, it’s because we were playing instead.

And if it still wasn’t folded once Vita and Zen were sleeping, it’s because James and I were deep in candle-lit conversations. How precious time is when we make it so.

On still Autumn nights, as the crickets sang in chorus to the 2 am moon, I lay awake stock-taking. I didn’t make bucket lists or pen a will.
I knew it wasn’t going to kill me, but awareness of impermanence had somehow anchored me into something deeper and more meaningful than the day-to- day routines that can swallow up existence.

One night, questioning myself as the moon climbed above the ridge, I felt a flash of genuine appreciation for the mole that had triggered such a process of evaluation.

That said, a day ago when I was lying on the surgeon’s table getting the carcinoma removed, I didn’t feel an iota of remorse to be bidding it farewell. It had gone deeper than expected, the specialist said. If it had penetrated my skull, it could have entered my brain.

Today my head feels like it’s been cauterised by a red hot poker but I’m floating with relief that the episode is over.

Outside the window, a white butterfly dances above the kale bed. Pax, the dog, howls at a distant noise and Takuma, our Japanese wwoofer, trudges past with the wheelbarrow clanking.

Life goes on, their actions say. The scar forming above my left eye reminds me that at some stage, it won’t.

Polly Greeks is a columnist for NZ Life & Leisure magazine, read her back catalogue of columns here. She shares her adventures on thisNZlife in a fortnightly blog.