Street art and historic charm: exploring the best of Dunedin 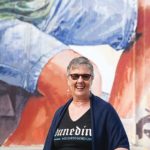 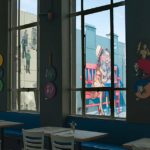 Love is in the Air by Natalia Rak seen from a window at Vanguard Café. 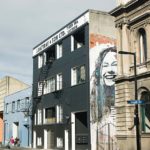 Vogel Street, at the heart of the rejuvenated Warehouse Precinct with street art by local artist Jon Thom. 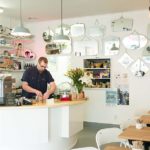 Jay Dixon preparing and serving his coffee with love.

Grabbing a cup at the Daily Coffee Company. 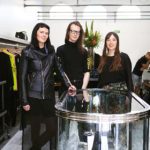 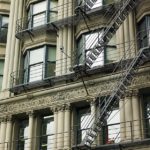 Consultancy House (built in 1908 as New Zealand’s first “skyscraper”) in the Warehouse Precinct. 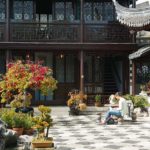 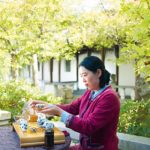 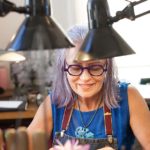 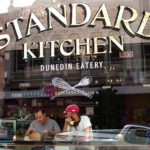 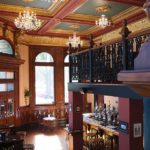 The Duke of Wellington pub 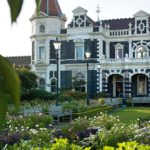 A grand city built on a wave of gold-fueled wealth, Dunedin has had its ups and downs. today finds the city very much on a high.

When I was lured to Dunedin in the early 1990s for the city’s fabled university life, there was no such thing as Google Maps. I simply hopped on the shuttle bus at the airport and asked the driver to deliver me to my new life on Arthur Street in the central city. I distinctly recall the moment Dunedin unveiled its panoramic vista – a hill-cushioned urban landscape wrapped snuggly around a glorious harbour. 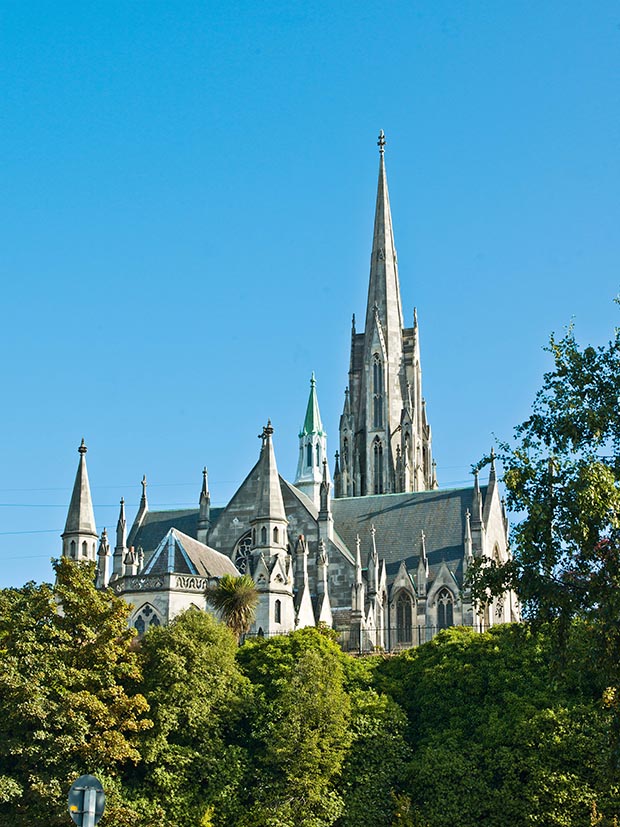 A view of the Gothic-style First Church of Otago (opened 1873) taken from Toitu Otago Settlers Museum.

There was a charm to the place but it was hard to define. Maybe it had something to do with the fact nature so clearly shaped the city. Perhaps it was the urban skyline, punctured by gothic spires and solid, wonderful buildings harbouring stories. Whatever it was, it had me from the very start.

I did the student thing and with framed degrees as proof of my diligence left the city to start a real job and wear sensible clothes. Twenty-five years later I find myself back wandering the streets that were part of such an influential period of my life. The same charm still exists but there is now a buzz to Dunedin that wasn’t there before. After decades chugging along in the wake of its time as the country’s largest city, Dunedin now stands tall, proudly embracing and celebrating all the things there are to love about it. 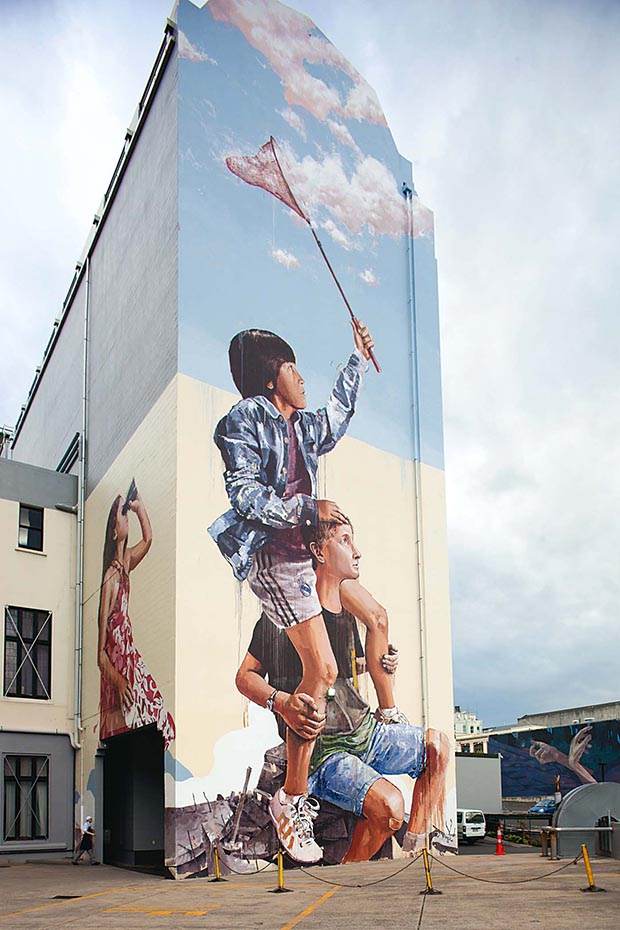 The tourism industry is helping (if the captains of the original ships could see the size of the cruise ships today they would run aground in astonishment) and student numbers have swelled. That ebb and flow of the learning masses feeds the place with youthful exuberance and keeps Dunedin honest and hip, with a vibrant edge.

More stories you might like:
Water Cooler: Art Deco decadence in Napier, 4 things to do in Vevey and the NZ Attitudes and Values Study

I plant myself in the middle of the Octagon beside a yarn-bombed (Fringe Festival antics) statue of poet Robbie Burns. It’s a grand position he occupies, keeping a watchful eye over the patrons spilling onto the pavement around the Octagon’s perimeters, and Robbie would be chuffed with the city’s recognition as a UNESCO City of Literature. The revamped Captain Cook pub, a cesspit of a bar in my day, now plays venue to the odd literary reading session, for goodness sake. 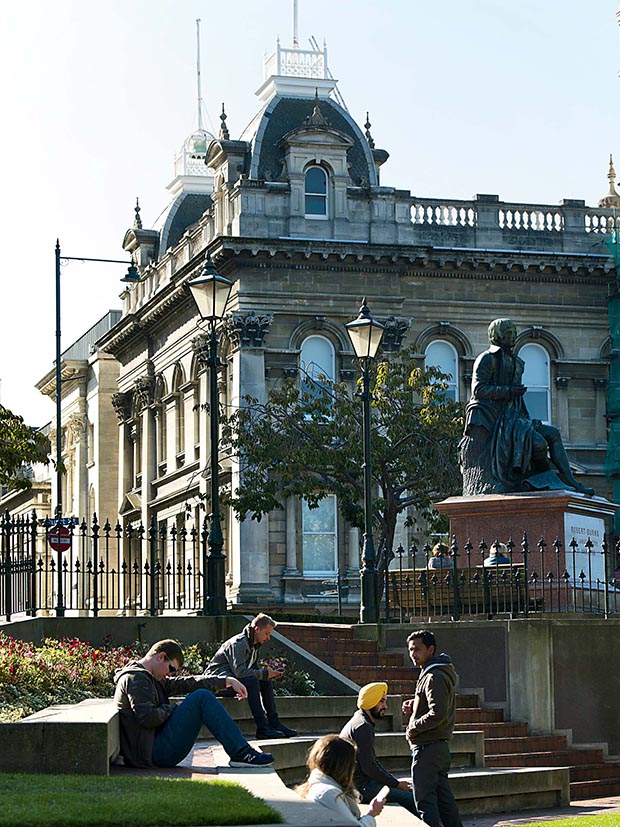 Robbie Burns in the Octagon.

The Octagon is a fitting place to start a walking tour with Athol Parks, who shares the charms, secrets and colourful heritage of Dunedin through its built environment. The urban renaissance started right here, with the restoration of the town hall and spruce-up of the Octagon in the early 1990s and has since spread outwards. And that reinvigoration has gathered pace in the lonely wind-blown blocks south of the Octagon, where buildings have been thrown a lifeline and are filled with conversation once again.

Walls have become colourful, providing the canvas for huge, lively, street-art murals, some on main roads, others hidden down brick-lined alleyways. These commissioned works, by notable street artists, add another vibrant layer of narrative to the re-energized streetscapes. The fun and mischievous street-smart and street-art tour guide Victoria Gilliand (who quietly admits she would be a graffiti artist if she could turn back the clock and graffiti happened then to even be a thing) shares her knowledge on street-art styles and techniques, the artists and their work. There are more than 30 major works and the best thing about street art, Gilliand suggests, is hunting it out and – even better – finding it by accident. 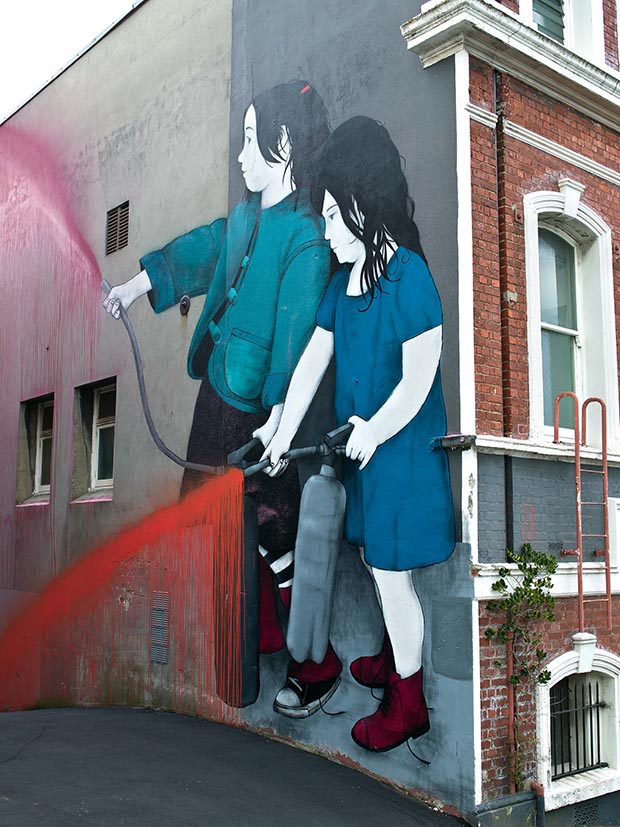 Dunedin is a perfect place to throw away the car keys and Shanks’ pony the urban streets. I like to walk. It allows a slowing down, a pottering about, an opportunity for exploration and discovery along the way. Everything is deceptively close too. It is possible to walk from the city centre to arguably the best botanic gardens in the world and take in the museum and university
en route.

The Star Wars duo in paste-up form, a genre of street art.

Or time could easily pass staying in the inner city, soaking up the urban vibe with boutiques, bars and beautiful buildings spreading out in all directions. The Dunedin Chinese Garden provides a calming space to restore chi levels depleted by too much caffeine, and experience Ming Du’s meditative traditional tea ceremony, an art passed down by her uncle. Dunedin has always had the label of a university city, which it is and proudly should be. But there is a growing sense of stability here. Gigarush has replaced goldrush as another lure to the kereru-filled southern city, its Gigatown status making it a viable option for high-tech businesses with global connections. My old Arthur Street flat is now one of those businesses and high-tech conversations fill the space where Twink bottles were once my only editing software. There are many other lures to Dunedin too; including the lack of traffic jams which help considerably when whipping out for a quick surf at lunchtime. It’s worth keeping a thick wetsuit in the boot. 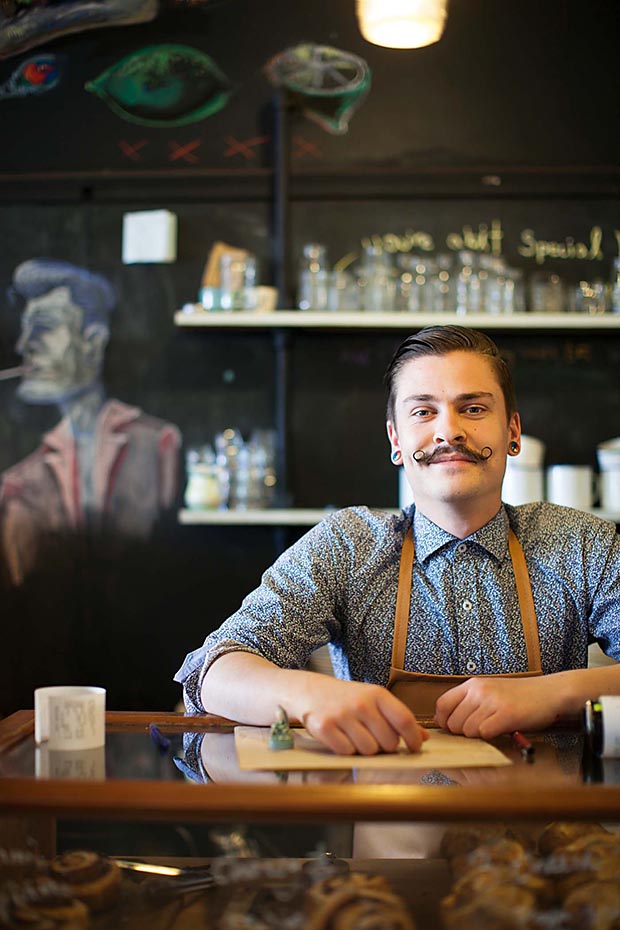 The temperature of the water and proud Scottish ancestry both help keep the city grounded. Stock trucks that ply their way through the town leaving plumes of sheep-poo pong in their wake (no bypass options here) are also a constant reminder of the city’s servicing role for the big country hinterland. Dunedin is what you want it to be, with all the benefits of a big town and the culture fix of a great small city. It’s open and friendly in a Scotland-meets-Southland way. And that’s exactly why I like it here and have decided to call it my home. A real grown-up home, where wearing sensible clothes is very unfashionable indeed.

Getting there: Air New Zealand flies to Dunedin from Auckland, Wellington and Christchurch with connections available from all Air New Zealand serviced domestic airports. airnewzealand.co.nz 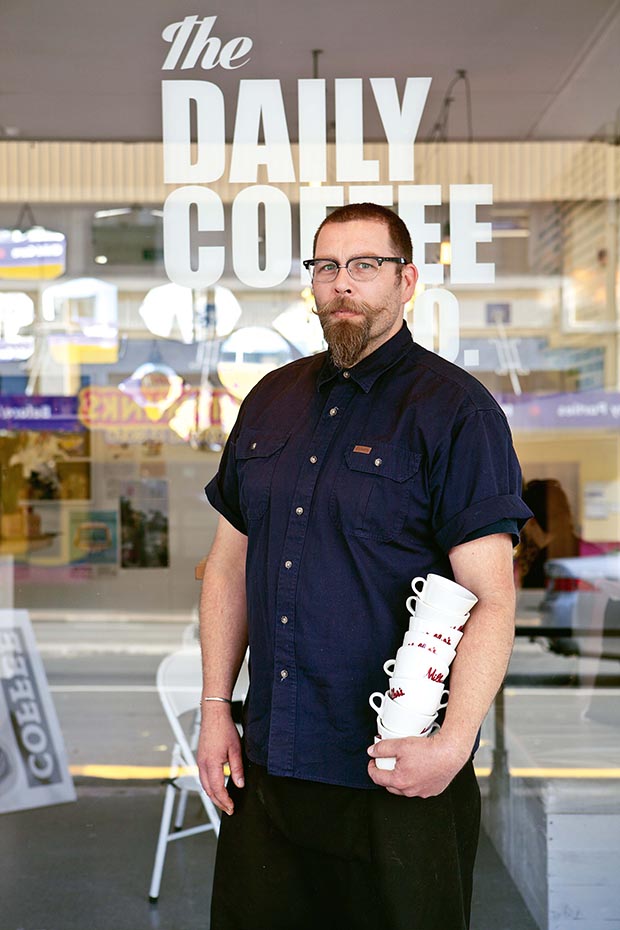 Where to eat: Vanguard café in Princes Street has an extensive daytime menu with the added bonus of views to three major street artworks. Have a sneak peak at the menu beforehand at vanguardcoffee.co.nz

If it’s coffee you are craving, The Daily Coffee Company on the opposite side of the street offers just that. And because all the focus and energy is on the coffee, it’s really good.
facebook.com/the-daily-coffee-co

Dunedin’s Chinese Garden provides a tranquil space in which to be present with tea, steamed buns and dumplings, dunedinchinesegarden.com BE IN TO WIN THE ULTIMATE DUNEDIN WEEKEND, VALUED AT $3000 ENTER HERE