Angela and her dogs Georgie and Scout.

Angela Beer didn’t even know she was a dog person until she met her beloved Dunhill, and she had even less idea just how far that love would take her.

Angela Beer was dumped and depressed. So was Dunhill the jack russell. Dunhill was incarcerated in the pound and Angela may as well have been, the way the walls of her life were leaning in on her.

Luckily for both of them, they had a mutual and compassionate friend who quite literally put one and one together and made two. Angela, at 37, got her first dog ever. Dunhill, at eight, found his forever home. It is easy to see how much these guests love their breaks from the pavements of their city homes.

She had the best case of delighted flabbergastation ever, and he got an owner who was not only old enough to have most of those annoying human kinks ironed out, but was also such a dog novice that Dunhill could mould her into just the owner he wanted. 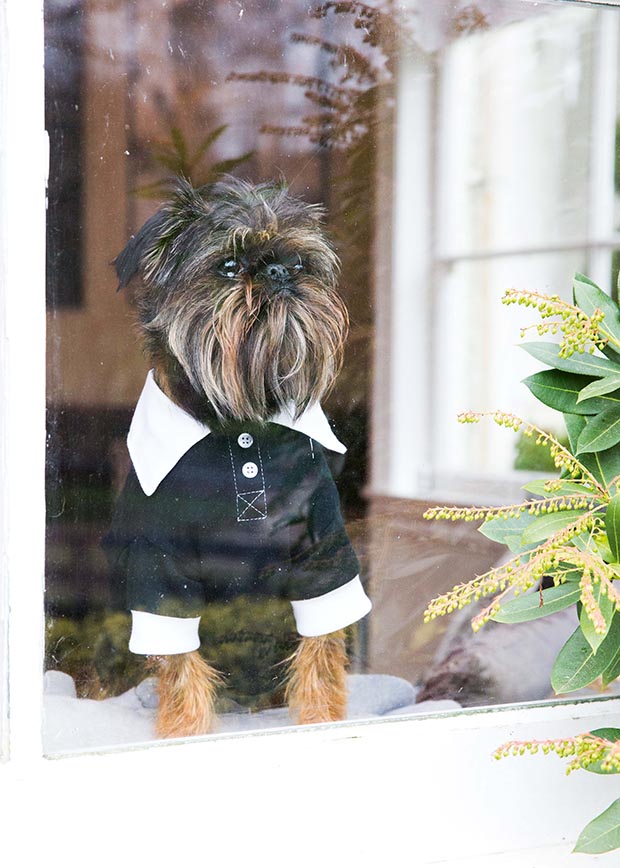 Richie McPaw in his All Black strip

Oh, he was a wag, that dog, and it wasn’t just his tail. He had a grin that went right across his face nearly to his shoulders and a heart that was capable of almost complete devotion; “almost” because a little part of it would remain forever bruised by his early experiences. But this was a good thing, too, because it taught him to be cautious while reminding him of his enormous good fortune in finding Angela and he determined to never, ever let her down. 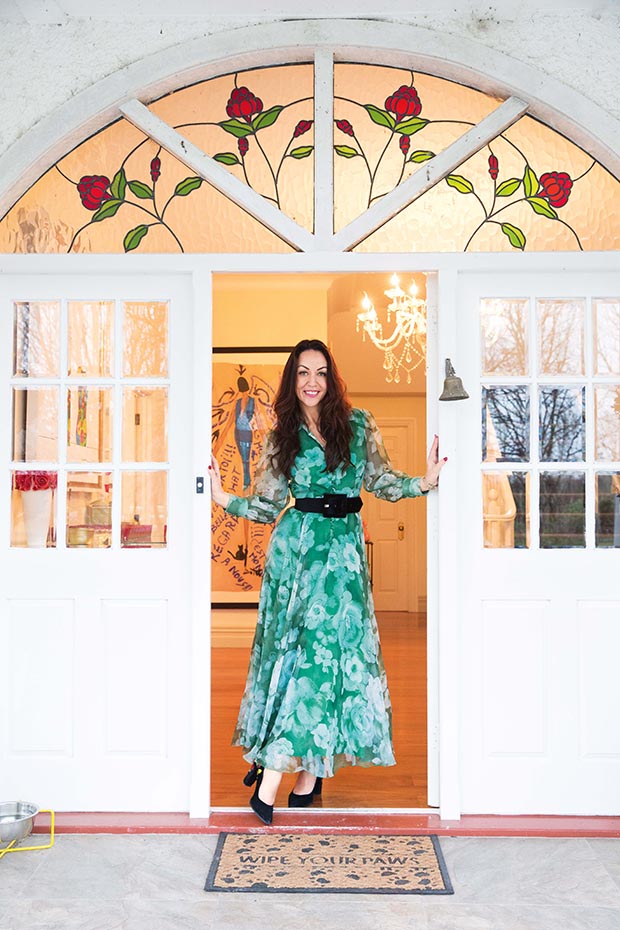 Angela hopes to buy the next-door farm that has three cottages on it so she can provide onsite affordable housing for her team in the face of increasingly high rents in Auckland.

And he never did. There are those who thought he came close, once, when he went missing for eight days while Angela was away looking after her sick mum. He was deaf, nearly blind and 14 years old when that happened.

But, if you are inclined to believe that we are not in this alone, that we never really stumble along solo, then ponder this: At a time when Angela once more had challenges to overcome, when she could probably least deal with the disappearance of the dog that rescued her from herself the first time, more than 300 people came to her aid, people who knew of her and Dunhill through their work for animal welfare. 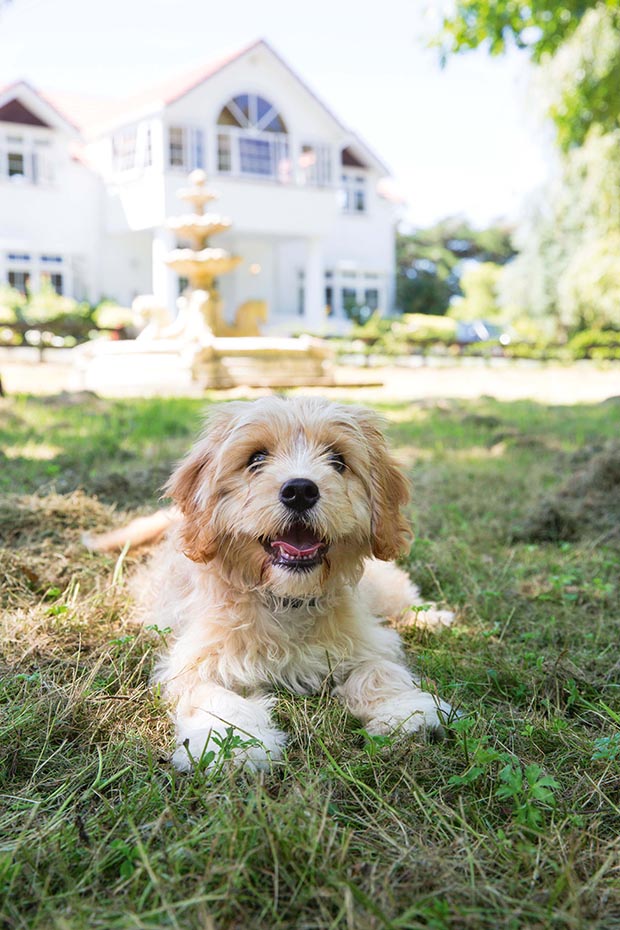 Louis with his winsome smile.

More than 300 friends Angela didn’t even know she had called her dog’s name into the coldest of winter nights when they could have been home in front of a warm heater. They called and called until they found him, wet and hungry (and probably a little cranky, but he didn’t show it, letting himself be rescued with typical Dunhill dignity), down in the mangroves at Westmere, in Auckland’s western suburbs. Dunhill always did have a way with the ladies, but this time he surpassed himself, rustling up some solid female support for Angela. Buddy in his cushion fort. Buddy metaphorically has his own key to this country estate because he comes to stay every year while his owners are in Europe

But back to those early days with Dunhill. Angela was a bit lost in both life and confidence. After all, she’d had some huge successes. In what she now sees as the first stage of her life, she was a very young group account director for a large advertising firm, then the marketing director for a 300-staff corporate, and finally the owner of a successful marketing consultancy before a brush with thyroid cancer slowed her down. On the current site, she already provides accommodation for a programme that allows people who have a depressive illness to interact with the canine guests. “When you are in the caring professions, you really have a a duty to care not only for the animals but also your team, and hopefully humanity and the community. The blessing in not having children is the time to dedicate to community issues.”

The second stage of her life was entrepreneurial, where (now thankfully cancer-free) from her kitchen table, she founded the Hello Dolly brand of DIY and garden tools especially for women. The concept was a hit worldwide, and was sold in major department stores like Harrods, Liberty and David Jones, as well as Europe, Canada and Singapore. She worked hard and was financially well rewarded, but it still cost her dearly. Her partner worked for the United Nations in the Middle East, and she traveled between there, China and her clients. It stretched the couple too far; they ended up spending little time together and there became too many physical and mental oceans between them. Painting is another of Angela’s talents and her pictures line the walls. 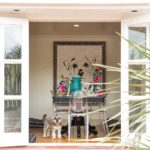 No chilly kennels outside for these lucky pooches 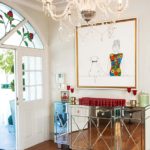 Angela also loves interior design and decorating, but her beautifully turned out house doesn’t preclude her four-legged guests from also enjoying her style. 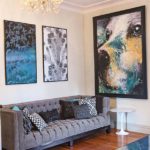 All the dogs are welcome inside and those that stay overnight sleep on covered couches.

More stories you might like:
11 pest trapping tips from New Zealand experts + how to catch pests that are killing your chickens

Now she found herself in an odd space – with nothing she wanted to go back to and little to look forward to. She was done with the business world and didn’t want to risk burnout by starting a new project. She felt she didn’t fit in. She had money and success, but she realized that those things did not bring happiness. So when she was asked to be a mentor or speak on her achievements, she felt phoney because she knew how hollow success could be. Depression crept over her.

How ironic that depression should often be referred to as the “black dog” because ultimately it is dogs that have saved her. There is a crack, rasps Leonard Cohen, a crack in everything; that’s how the light gets in. The crack, for Angela, was that cheeky jack russell Dunhill, and for a while he was all Angela needed or wanted. 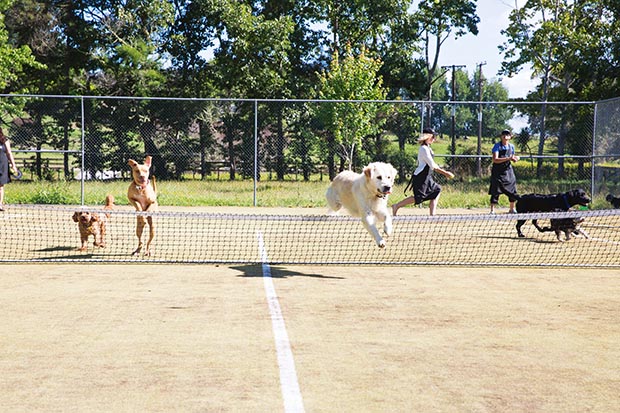 Guests and staff play with the automatic ball lobber on the tennis courts.

Then an ex-colleague started the business Pets & Pats and approached Angela to be her business mentor. Angela declined but asked her what her difficulty was. Bills, they were the problem, her colleague couldn’t pay her bills. So here’s a plan, said Angela. You go and drum up some freelance work to cover your costs and on the days you have to be doing that, Dunhill and I will take out your clients for free.

It was a good solution, not least that Dunhill and Angela, with the clients of the day, had fun at beaches and parks. It was also all the headspace Angela needed, and she found a growing sense of being grounded again.

More stories you might like:
From London to Herne Bay: A British-Kiwi couple learn to love the slow life after returning to Aotearoa Three months later, the colleague gave it all up for love and passed the leads to Angela. And there it was, the beginning of a third life; Angela Beer had gone to the dogs.

Being aware now of dog day-care centres and kennels and how they are run, Angela decided there was a need for an upmarket, personalized and boutique luxury dog day care with overnight stays, which is why the farm – her Disneyland for dogs – was born at Dairy Flat within Auckland’s northern reaches. 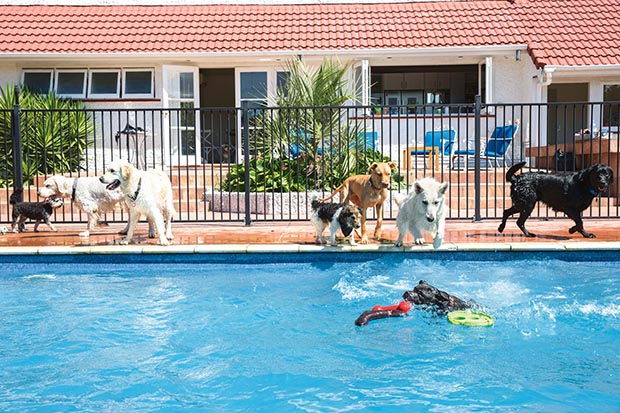 Taking a dip in the pool

The business has grown slowly and organically over the past seven years, with select group of clients bussed to the farm during the week to swim, snooze, romp and play, chase balls lobbed by a tennis ball machine on the tennis courts and do as much or as little as they like. Angela and her partner Jason Shepherd alternate their time between their house in the city and their country house. When Jason is not lending a hand with the dogs, he is a creative in the film industry.

Angela and her partner Jason Shepherd – now joined by dogs Georgie and Scout – divide their time between the country farm and their inner-city home, enjoying the best of both worlds. Dunhill has since passed – or has he? Physically, no doubt, but he was such a charmer, such a life force, it is impossible that he is not continuing to oversee matters. It is also fully possible that the wet nose kiss pushed into the palm of a hand is not your imagination at all. 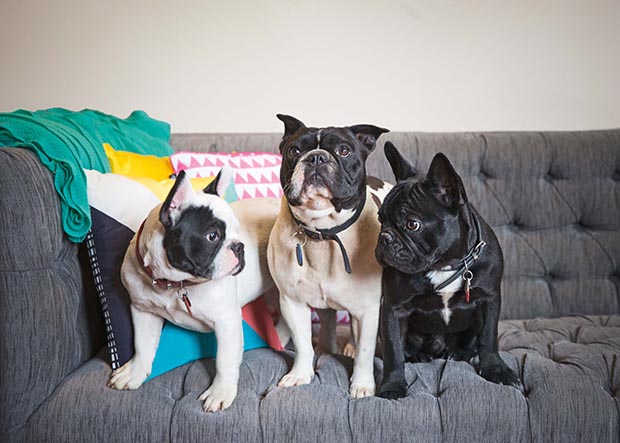 There was a time if anybody had even suggested that one day this girl about town would be living in the country, brushing dog hair from her jeans, Angela would have told them they were delusional. She could not even begin to imagine such a scenario and yet here she is, in the third stage of her life. She has no plans for any more stages – this is what she loves, and this is what fulfils her. What is meant to be always finds a way.

On the current site, she already provides accommodation for a programme that allows people who have a depressive illness to interact with the canine guests. “When you are in the caring professions, you really have a a duty to care not only for the animals but also your team, and hopefully humanity and the community. The blessing in not having children is the time to dedicate to community issues.”

DOG HEAVEN
There are two parts to Pets & Pats – the day care, where dogs are picked up and returned in the “school” bus and overnight accommodation, where they stay in the house with Angela and Jason. But first, the clients must come out to the farm to inspect and to be inspected. Prospective attendees get a “staycation” – two free days with an overnight to see if they are happy. Like people, dogs can have separation anxiety, so it is not uncommon to have to get up several times a night, especially for young dogs.

Looking after someone’s dog makes you part of its family, says Angela. “You know their lives because their dog comes to stay while they are on holiday, or because they have to go to a funeral, or they’re off to visit a newborn grandchild. It can also be heartbreaking because treasured guests die or their owners split up and the dog is relocated and never seen again.” petsandpats.com 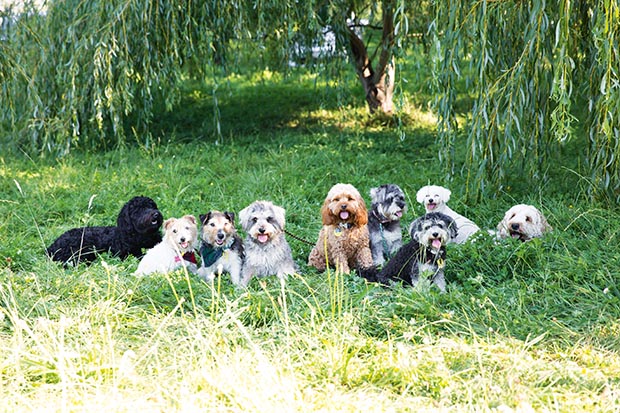 THE GREAT BEAGLE MARCH
Angela could not believe it when the psychoactive substances bill was introduced in 2013, allowing so-called legal highs to be tested on animals. That beagles would die so people could get high was abhorrent, and the specific practice had already been outlawed as unnecessary in Britain more than a decade ago. Angela got to work, rallying Aucklanders to join other protesting groups nationwide. It has been the biggest animal rights protest to date. The bill was subsequently amended not to allow animal testing.