The ancient art of glamping: Why Kiwis are returning their camping roots at Nikau Sanctuary in Raglan 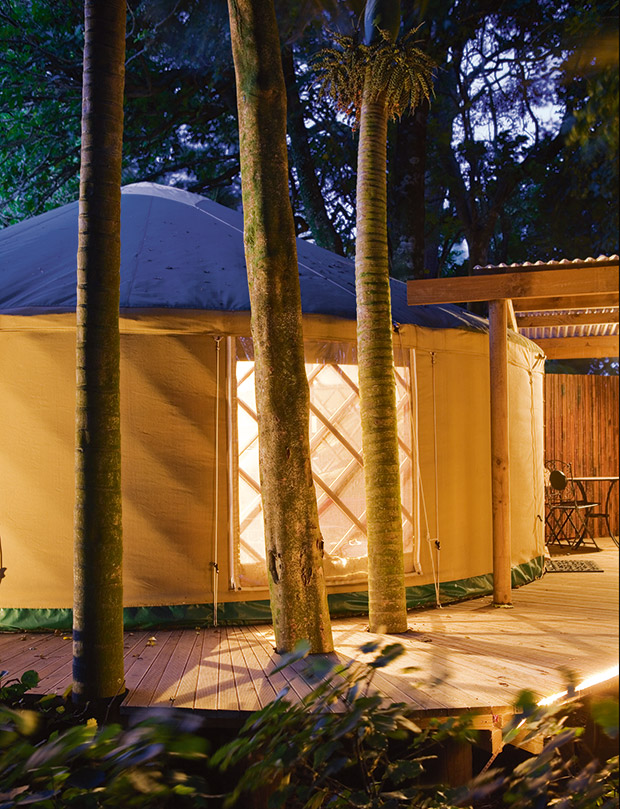 An ancient pack-up-and-go structure is reincarnated as a camping-with-comfort option, proving that what goes around comes around.

Originally published in the Jan/Feb issue of NZ Life & Leisure.

When it comes to glamping, Genghis Khan was ahead of his time.

Not one to scrimp on comfort, the warmongering 13th-century leader was famous for the lavish décor of his yurt. His vast empire didn’t quite extend to New Zealand but on the edge of a small stand of native bush in Raglan, his style of lodging has come full circle.

Yurts, the round tents still used by Mongolian nomads, have undergone a renaissance as people in the West look for affordable, low-impact housing. Glamping is also in vogue, according to Robbyn and Peter Storey and their business partner Thomas Koppen, who have combined the two to offer Raglan’s first luxury yurt accommodation.

Defining glamping as glamour camping, Robbyn explains how the public is tired of sterile hotel rooms which look the same no matter where in the world they are.

“People can afford to go upmarket but want to get back to their camping roots. They want the feeling of getting away from it all and being in nature but they also want the mod cons – the hot water and the comfy bed.” “And they don’t want to be crowded into a camp ground,” Peter adds. The camp ground for those staying at their yurt is Nikau Sanctuary, a stand of huge nikau palms and centuries-old rimu and tawa. The couple bought the slightly-under-one-hectare property on hills at the back of Raglan in March 2009 and were delighted to discover the trees.

“Small but special,” is how Peter describes the patch of bush, explaining that their appreciation for it motivated them into offering yurt accommodation. “We didn’t want people walking around in there in case they damaged it, but we did want to share the forest and show it off.”

More stories you might like:
Artist Paul Walsh on giving power to the people (through cats and spaceman sloths)

Reluctant to disturb any plant roots, Peter built a wooden boardwalk to reach the yurt, incorporating living tree trunks into the pathway’s construction. From the wooden deck around the yurt’s entrance, the view through the subtropical nikau is almost subterranean as green light filters under the leafy canopy. An outdoor spa bath and barbecue area have been set up there, while night-lights in the bush cast mysterious nocturnal shadows. 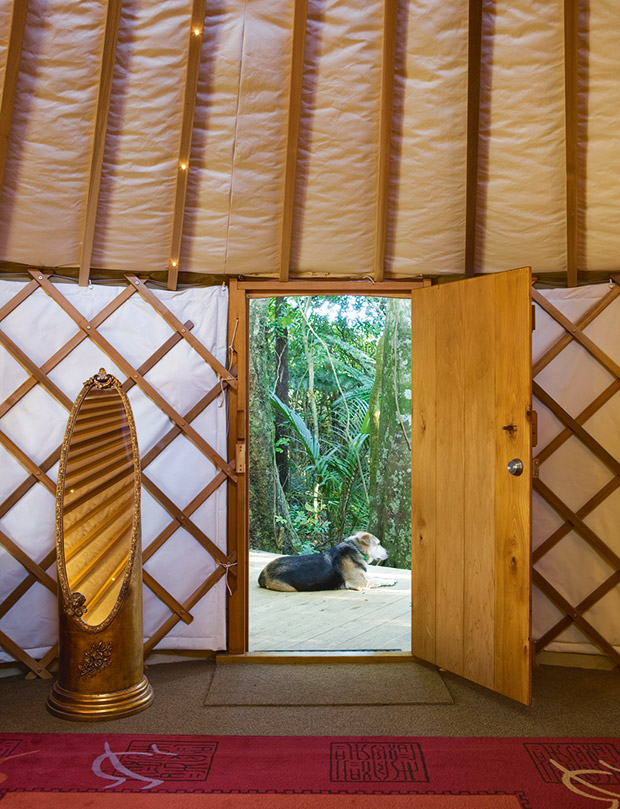 Initially, a tipi was the style of tent favoured by Robbyn. Following a marriage breakup, she threw in her job as a registered nurse and went to Maui in Hawaii to study massage therapy. After encountering tipi-based massage there, she wanted to offer the same experience to clients back home.

When Peter learned of her dream, however, he suggested she see what yurts had to offer. After some online research, the couple came across Golden Bay company Jaia Tipis and travelled to Takaka to check out the yurts it produces. 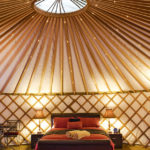 Nestled among nikau palms and other natives, the yurt often takes first-time visitors by surprise as they discover the level of comfort within its canvas walls. 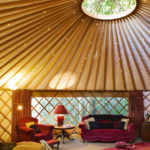 The skylight or “eye of heaven” can be covered by a cap in cold weather while two windows open to increase summer ventilation. Tiny lights added to the radial roof poles add to the ambience.

Despite a fierce wind screaming off the ocean, the yurt is a dome of unruffled white silence and is surprisingly spacious and snug. Since the yurt has no corners, Robbyn explains, the wind goes over and around the construction. Robbyn massages a client in the smaller yurt.

The design has been described as architectural genius – a circular folding lattice wall topped by a tension band, with radial roof poles running from it into a skylight rim. The skylight itself is known in yurt lingo as “the eye of heaven” and can be opened or closed depending on the temperature.

Traditionally the portable structure is covered in felted wool, but the Storeys’ yurts are made of canvas specially strengthened for New Zealand’s weather conditions.

“It comes as a kitset,” Robbyn explains. “We put up the small one first and it took us two hours but by then we’d mastered the technique and the big one was up in 40 minutes. We put in extra insulation to make them warm and cosy.” Peter is kept occupied by the couple’s collection of vintage cars which includes two Buicks, a Kaiser, a Jaguar, a Mercury and a gigantic nine-seater Edsel Woody wagon. Guests are offered chauffeur services in these vehicles and can be taken on picnics and scenic drives.

Peter put in the concrete foundation, adding underfloor heating. Including the cost of the yurt itself, furnishings, brickwork for the kitchenette and enclosed bathroom, electrics and plumbing, the entire set-up cost them $65,000.

So enamoured is the pair with the feel of the yurt, they’re considering living in one themselves. They were especially inspired, Robbyn says, after seeing a community of yurts in California’s Big Sur during a trip there.

More stories you might like:
From news junkie to radio newsreader: How Mary-Jane Tomasi became a well-known voice in New Zealand

They moved onto their property only nine months ago and are renting out the 90-year-old house while they live in rooms to the side of the large shed they’ve built. 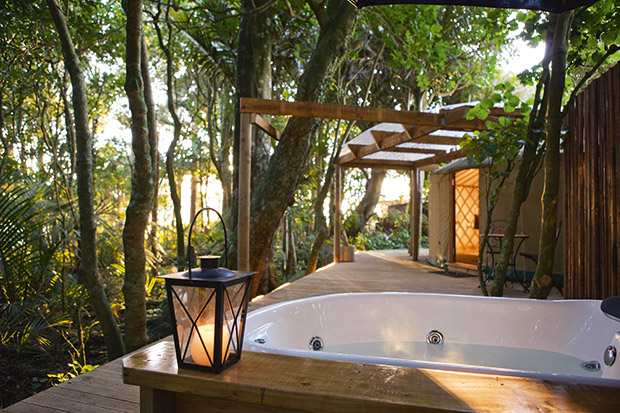 Robbyn says her massage business keeps her busy. She specializes in Hawaiian lomi-lomi and offers yurt guests massages as part of a package.

“I want this to be a really womblike place where people can come to recharge and find their centres again.”

The yurt’s guest book indicates she has succeeded. Comments from contented visitors such as “romance enhancing”, “relationship revitalizing”, “great for mind, body, soul” and “the perfect getaway” help to explain why word-of-mouth advertising is ensuring that the yurt is constantly booked for weekends at least a month in advance. Sometimes, Robbyn and Peter admit, they like to book themselves in for a night there.

There’s something very soothing and gracious about the space, Robbyn feels. “If you sleep in a yurt you sleep really well and you dream really well.”

LIFE IN THE ROUND

For nomads living on the high steppes which stretch between Turkey and China, there are no better houses than yurts or ger, as the Mongolians call them. Built to withstand extreme winds, they offer warmth in temperatures below –30°C and are cool when the mercury hits 40-plus. 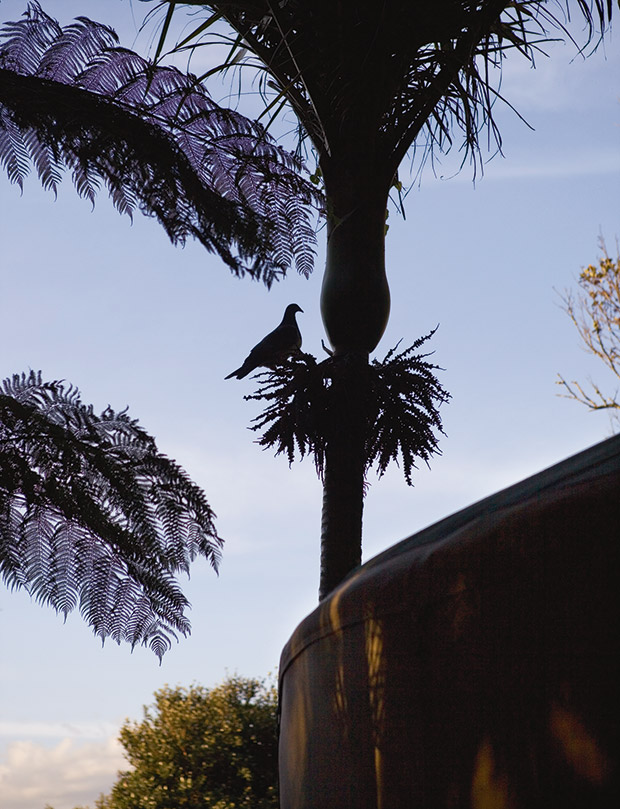 The collapsible circular trellis can be packed onto the back of a camel in an hour and the tension band designed to take the outward thrust of the conical roof eliminates the need for internal posts, lintels, rafters, headers or joists. Marketed in the West as “instant, cheap, environmentally clean housing”, the yurt is a tried and tested design.