The bookshop at the end of the world: Discover the rare treasures of Adventure Books in Oamaru 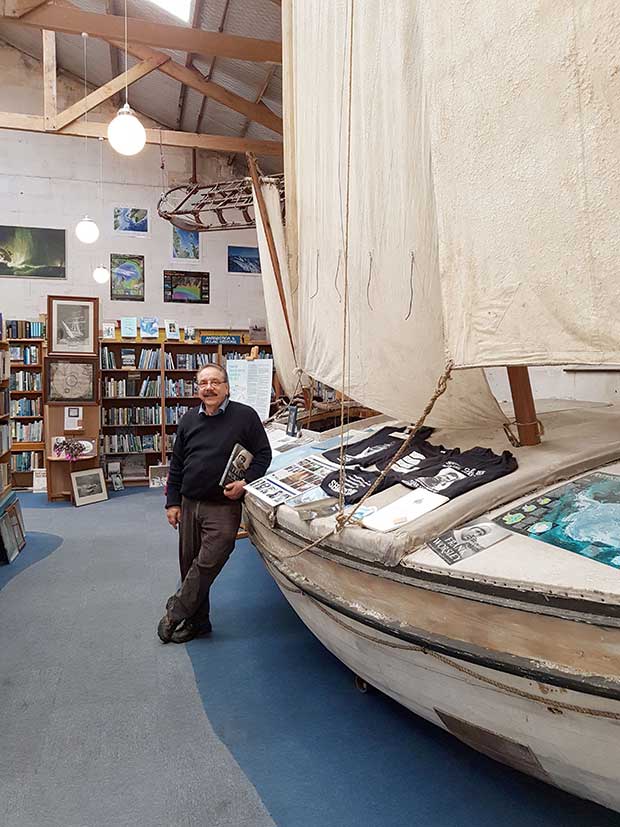 Rare books with adventure and action tucked into their pages have found a home which restless spirits of all kinds will appreciate.

It’s the only shop of its kind south of the equator. True, there are businesses that sell similar stock online, but there are no other physical outlets to match what Bill Nye offers at Oamaru’s Adventure Books.

And only in the steampunk capital of the world would you find a full-scale replica of a 100-year-old lifeboat, sails set, washed up in the entrance of a shop dedicated to preserving tales of exploration, travel, mountaineering, polar expeditions, sailing, natural history and vintage literature.

The original James Caird was a 23-foot lifeboat in which explorer Sir Ernest Shackleton, his captain Frank Worsley of Akaroa, and four other men made a voyage of 800 nautical miles in tempestuous open seas to summon help for the rescue of 22 men left behind on Elephant Island off the coast of Antarctica after their ship was crushed by pack ice on the Endurance expedition. The replica was used in the filming of the TV movie Shackleton’s Captain, available at the shop on DVD. 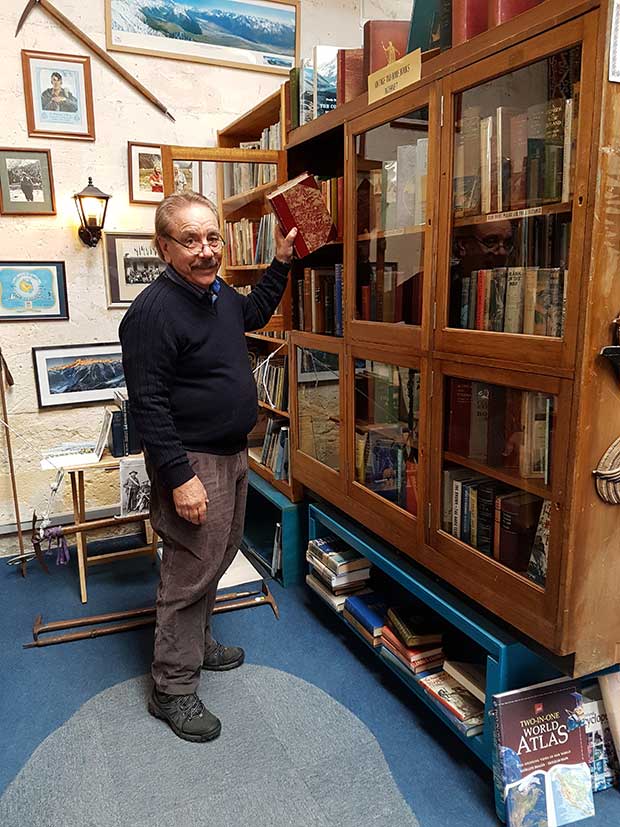 Bill presents a deluxe edition of Climbs in the New Zealand Alps by Edward A. Fitzgerald. It is one of only 60 copies printed, signed by the author and probably the only copy in New Zealand; a beautiful book bound in half calf leather with raised bands on the spine, marbled boards and end papers, and printed on very thick, hand woven Japan paper, which doesn’t develop the rusty speckles known as “foxing”, and common in old books. Price is $7,700.

Other artefacts throughout the space include antique maps, framed prints and globes, ceremonial and decorative objects from Papua New Guinea and a 1960s dog sledge – a gift from the New Zealand Antarctic Society.

Adventure Books stocks high-quality rare, antiquarian, out-of-print and new books that range in price from a few dollars to $20,000 and more. Yet people are so unaccustomed to seeing a dedicated bookshop, as opposed to a franchised book and stationery supermarket, that it’s common for browsers to ask if the shop is a film set or a museum.

More stories you might like:
Legends of Leigh: This couple has been protecting Goat Island for more than 20 years

Bill hosts a monthly public lecture delivered by adventurers, mountaineers, natural historians and the like, and he produces catalogues on rare and interesting examples of the different genres stocked in the shop. These he posts on his website and sends to book collectors throughout the world.

But how does a native of Corpus Christi, Texas come to be selling recherché and specialist books in Oamaru. And how does he make a living at it? 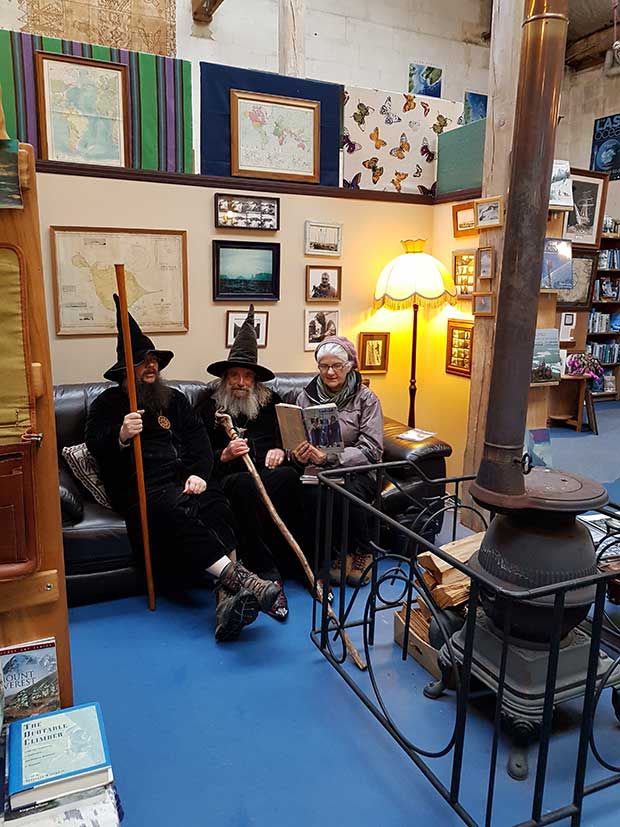 Bill never knows who might drop in. Here Jack, the Wizard of New Zealand (centre) warms his winkle-pickers at the cast-iron pot belly stove in the centre of the shop flanked by his fiancée, Alice Flett, and apprentice Wizard Kierin Mackenzie

Bill Nye, 73, was a fluids engineer in the oil industry for nearly 40 years and a life-long bibliophile. Disenchanted with his country’s militarism, he and his then wife left the United States in 1984, and Bill established his first bookshop in Queensland, which he tended during his rostered time off from the oil fields.

The marriage ended, he moved to New Zealand and, after the February 2011 earthquake destroyed what was to have been his new bookshop in Christchurch, he relocated his collection of 12,000 books to this Victorian limestone warehouse in Oamaru.

He has 200sq.m of floor space to fill and the ceiling rises to almost eight metres at its peak. He has plans for the space up there, but that’s a story for another time. The 1960s dog sledge hanging from the ceiling was used in the vintage days of survey work and mapping in Antarctica. The sledge is hand-made with leather bindings. Dogs were removed from Antarctica in 1988.

Bill worked as an engineer on all seven continents, usually in remote locations where reading “made for an excellent companion”. In his downtime, he collected books.

“I love those that record a sense of adventure, exploration and discovery and reflect the interaction of humans and nature – books about discovering new dimensions within the wild environment and within the adventurer.”

He has thrown out his anchor in Oamaru. “I’m here to stay,” he says. “Oamaru’s historic precinct is a unique part of New Zealand’s heritage. It’s a cultural experience; a combination of architecture and a community of creative artisans and entrepreneurs.”

The precinct attracts a good number of tourists, and visitors to Adventure Books are encouraged to take a seat on the shop’s comfy leather couches to warm themselves at the old cast-iron potbelly stove while they leaf through books or talk adventure and travel.

If there are only one of two customers in at a time, they’re likely to be offered a cup of tea or coffee.

Of course, making retail sales of rare and specialist books to a population of 14,000 locals and a smattering of tourists would never provide the income to sustain the enterprise. Bill has had a few lean years but, he says, “Two things have helped the shop turn the corner: I’ve become better-known as a reliable source for quality books in these specialty subjects, both in New Zealand and overseas, through our website and a social-media page. 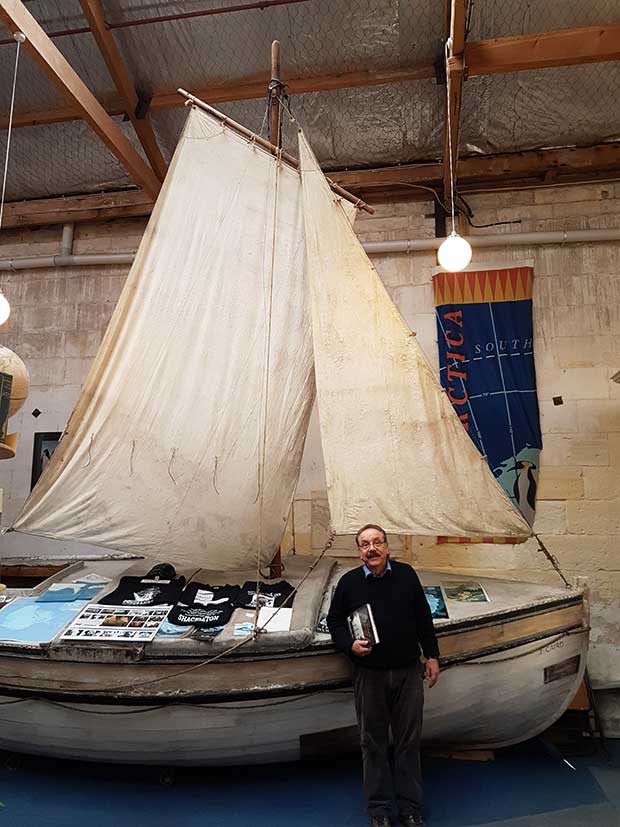 Sales through the internet and catalogues have increased each year. And in order to continually provide fine books I’ve had to become quite a good scout, buying worldwide at auctions, at book fairs and purchasing estates. I’ve trained myself to find rare and valuable items in second-hand bookshops all over Australia, USA, and UK as well as New Zealand.

More stories you might like:
Behind the scenes at Lothlorien Winery: How this clever Ahuroa family uses their 30-tonne feijoa harvest

“It’s fun to display a collection of wonderful books in a gorgeous setting, fun to meet new people, to talk about and compare adventure stories – and it’s rewarding to make my own small effort to help promote wilderness conservation in our spectacular world.”

Bill believes books on adventure and exploration will always be appealing because it’s part of our nature to explore – “to see what’s on the other side of the ridge.”

What is the rarest book you’ve sold?

“A 1785 first edition of the journals kept by Captain James Cook and Captain James King entitled A Voyage to the Pacific. The four-volume set was all the rarer because it included a rogue volume written by a Lieutenant Rickman when all the crew were under strict instructions not to record their own accounts of the third voyage of the Endeavour. The set sold for $15,500 a year or so ago.

Your favourite book?
My first edition of Eric Shipton’s Blank on the Map (1938) which is made rarer because it has the original dust jacket. It’s a fascinating account of wild exploring and mapping an untraveled world and it’s endowed with Shipton’s descriptive and insightful writing. A wonderful story.

You must have encountered many adventurers and explorers in your time …
“I’m lucky to have met a quite few favourite adventurers over the years, including Peter Matthiessen, but Ed Hillary is one of the tops.”

Book collectors hunger for first editions, particularly those of books that subsequently became best sellers or are highly prized for the quality of the writing, illustrations and/or print-production values.

To book collectors, there’s intrinsic worth in a volume that was one of the first off the printing press after the author placed the final full stop. The first edition imparts a sense of intimacy and wonder.

A collector worth their salt will place an even greater value on a publisher’s proof copy of the work with the author’s corrections and additions because this has an even more immediate association with the author and the book – and they are much harder to find.

Trawling through auctions and book warehouses to refresh a shop’s stock can deliver jewels to the book dealer.

Bill has a selection of literary titles outside the adventure genre including first-edition Ernest Hemingway titles, Jack Kerouac’s experimental Visions of Cody (a snip at $1200), an obscure Oscar Wilde title, Poems by Katherine Mansfield and various Janet Frame books among many others in the literary first- edition genre.