‘The caravan chooses you’: A Wānaka family on their camping-keen lifestyle and 1979 Oxford caravan Jay Smith with the family: his wife Mini, sons Archie (centre), baby Clay and ‘Nacho’ the caravan. Jay is the New Zealand agency director for global snowboarding brand Burton, is one of 30 adventurous Kiwis and their families profiled in the book, The Recreationalists.

Camping-mad Kiwis hit the road in all seasons. Wānaka-based Jay Smith says snow and adventure lure him and his family into their 1979 Oxford caravan even in the depths of winter.

We camp a lot — sometimes we feel like we’re homeless, right through winters, and through our two sons being newborns, it is honestly mental. Sometimes my wife Mini wants to kill me, but by the following weekend we’re back at it.

I’ve always loved camping, but then along came the rest of the gang (family). The pup-tent missions into the wild just weren’t going to happen; it was time to invest. The first decision was whether to go the adventure mobile or the caravan route. As I needed a new truck for work, that decision was dictated by the remaining budget: caravan it was. I knew nothing about caravans, but 1000 hours on Trade Me later, I was the owner of a 1979 Oxford. My son Archie named it Nacho.

We’ve had Nacho four years now. He came from Rangiora. Don’t all caravans come from small towns where old people live? Alexandra is another caravan goldmine. I bet Levin is good too. Nacho is a character wagon; I guess we were leaning towards that aesthetic. 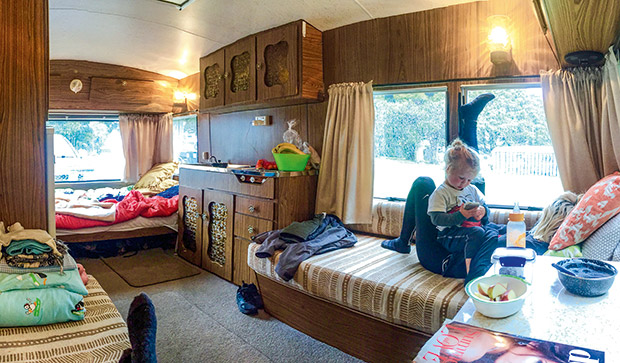 It’s fairly basic, but it is all we need. I love the wood veneer internals and old-school lamps. When we’re chilling, it feels like we’re in an old mountain cabin. The worn-out military green canvas awning and original wooden poles set up for a cool place to hang in summer on a rug. It’s just what we need and nothing more. Initially, we were going to set it all up to be functional off the grid (own power supply etc).

We quickly learnt that New Zealand campgrounds are always in the coolest spots, super cheap, and have good facilities such as kids’ playgrounds. Ninety-nine per cent of the time we find somewhere to plug in. It sounds restricting I know, but there are so many rad campgrounds scattered throughout New Zealand. We’ve been too lazy to sort out our free-camp options.

While all we do is wreck Nacho; it is still pretty mint. You could tell the family that owned it before us took so much care of it, and I’ve tried to continue that; but our kids couldn’t care less. Haha. I’m definitely no handyman, so we were just after something to hook on and go. For the most part, we haven’t had to do a lot. Just small things like curtains to block out the kids, outdoor lighting, new brakes. It’s worked out well.

We always try to be motivated to use the caravan no matter the season — it’s our chill time. Even though our kids are young, they’ve grown up in it. I’m lucky my wife Mini is always keen on a mission. We’ve camped at the bottom of the Ōhau Ski Area for the past two years. Thanks to knowing the owners, Mike and Louise, we’re able to leave the caravan there and get back every weekend we can. It’s rewarding because it is a bit more of a challenge to camp in winter. Even though the caravan is old, it’s a small space, so it’s easy to heat with a small bar heater. We just have loads of wool blankets and hot chocolates.

It’s fun getting into all our outerwear and heading up the hill for the day or coming off the hill and having the caravan as a cosy little base. The past couple of years, we’ve also organized a group winter camping mission around Tekapo and the Roundhill Ski Area, called Dark Sky Snow Camp.

You don’t choose the caravan; the caravan chooses you. And after that, you have to go through your initiation, which you have no control over. This may not be everyone else’s case, but it has definitely been mine. I think on at least the first 10 caravan trips, something broke or went wrong. It was really testing me. Not long after we purchased the caravan in 2017, we had decided to do a big mission and spend Christmas in it at Pounawea in the Catlins. All planned and packed (Santa’s presents included), we headed off after work, fully loaded for the long drive ahead. About 15 minutes into our drive I (finally) noticed a guy trying to wave me down. There were flames coming out of the caravan’s wheel wells, up the sides of the body. When I pulled over, we had to use fire extinguishers to put the flames out, and there was melting rubber or plastic and black ash covering the wheels.

It was hard to tell what the damage was, but it did not look good at all. Turns out the old-style hydraulic brakes hadn’t released and got so hot they’d caught their own pipes on fire. It was lucky the tires didn’t explode. Right before Christmas — I could have cried. Anyway, we let it cool off, tidied it up and made a couple of DIY mods on the spot and made it to our destination (brakeless). Character building. Extracted from The Recreationalists: Intrepid Kiwis and their Campers by Craig Levers. Published by CPL Media. $49.95.