Policeman by day, silversmith by night 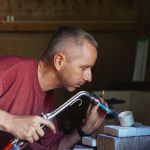 In a shoebox-sized workshop surrounded by bush, highway cop Martin Carroll works his alchemy with ancient and new tools. 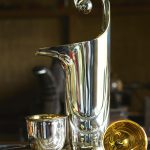 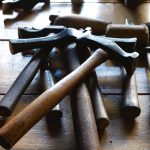 Some of the tools that Martin uses. 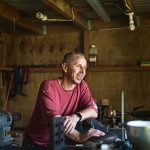 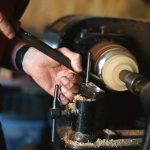 Many tools of the Martin uses are imported from England… 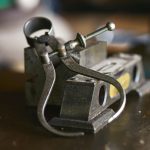 …however others he fashions himself. 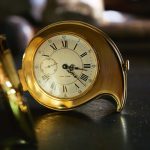 Precious pieces like a fob watch are handed down through generations.

Half of Martin Carroll’s life is spent stopping dangerous drivers; the other half is spent creating works of art

Martin Carroll’s days typically begin with sirens, lights and – frequently – the horror of a road smash. But they end in the most tranquil place imaginable; in the bush-covered hills of Tuakau, south of Auckland, where a choir of native songbirds provide surround sound and a family of friendly goats stands vigil at the door.

Martin is a cop, based at Pokeno, responsible for policing some of the busiest stretches of highway in New Zealand. But in his other life, he is a silversmith and goldsmith, creating exquisite art in the manner of the ancient craftsmen. From his rustic workshop – 200 metres down a bush-lined path from the house where he lives with his wife, Louise – emerge elegant silver jugs and goblets, bowls scattered with autumn leaves made from gold, bespoke butter knives, napkin rings, centrepieces, fob watches and a perfectly crafted hip flask designed for a client as an heirloom piece. “Pretty amazing isn’t it?” he says as he pauses to pet some of the gentle long-eared nubian goats who watch him work his alchemy inside the tiny workshop.

Martin and Louise are English. They came to New Zealand as part of a New Zealand Police recruitment drive in 2006 after Martin had served seven years in the Surrey Police. He says he was attracted to this country because it seemed a place of opportunities. One of those opportunities was to pursue the craft he loves. When he left school, he intended to study photography but, in a serendipitous hiccup, he was unable to take up that course and changed to silversmithing. In his five years at the Kent Institute of Art and Design in Rochester he won prestigious awards for his work. His path appeared to be set.

“But the silver trade can be a bit fickle. Work started to dry up.” At the same time as he was pondering his future, he saw a policeman walking down the road. “I thought that looks like an easy job.” A family of Nubian goats keeps him company while he works.

He says policing has been good to him, but working with precious metals full time is his long-term goal. Every hour not spent stopping speeding drivers, he spends in his workshop. Apart from a gas-fired forge, he uses the same processes and instruments craftsmen used hundreds of years ago. His workshop is stacked with time-worn spinning lathes, hammers, blocking mallets and vice grips imported from England. The silver is also sent out at a cost of about $1100 a kilogram. He gets huge pleasure from designing and creating works of art by hand. His work is often commissioned by people who want legacies that can be handed down through generations. One of his early customers in England was ZZ Top lead vocalist Billy Gibbons. “I was on duty one night and stopped at a teahouse. He was in there. I’d always been a fan, so I got talking to him about policing and then told him I was a silversmith.”

The musician asked him to make him two matching silver boxes to hold his guitar picks. The boxes were engraved with names special to Gibbons. Martin also made him two silver picks and a bulldog tie clip. “He seemed pretty pleased.”

He says his silversmith work is an antidote for the pressure of police work and it makes him better able to deal with angry motorists. “One woman I stopped said, ‘I hope you won’t take offence, but you have a really nice bedside manner.’ Several pieces have a special place in his heart: one is a trophy made for the Royal Marine Cadets in memory of his dad, the other is his first award-winning silver jug, which has a design on top that is curiously like the curl of a ponga frond. “It was made well before I thought of coming to New Zealand. Perhaps it was a sign of what was to come?”