The story of Beard Brothers: From a small Hastings butchery to a banger of an empire This outdoorsman’s venture, born in a backyard shipping container, is bringing finger-lickin’ good barbecue fare to the masses.

It is more than likely that Rob Beard was one of the first to notice the sacrilegious storm raging against a Kiwi classic — the sausage. A hunter and self-taught butcher, Rob could practically taste the imported pork sullying barbecues far and wide. Then came the “edible” synthetic casings and the cheap fillers; for a man accustomed to sausages in their purest form, this was a travesty indeed.

Rob, who is from Hawke’s Bay, is a devout believer in quality sausies. That’s why his range of award-winning sausages and patties is made from meat sourced from a trusted network of New Zealand farmers, using as few added ingredients as possible for his banger of an empire, Beard Brothers.

“The key is to keep the meat as unmanufactured as possible. Less is best, just as it is for winemaking,” he says. 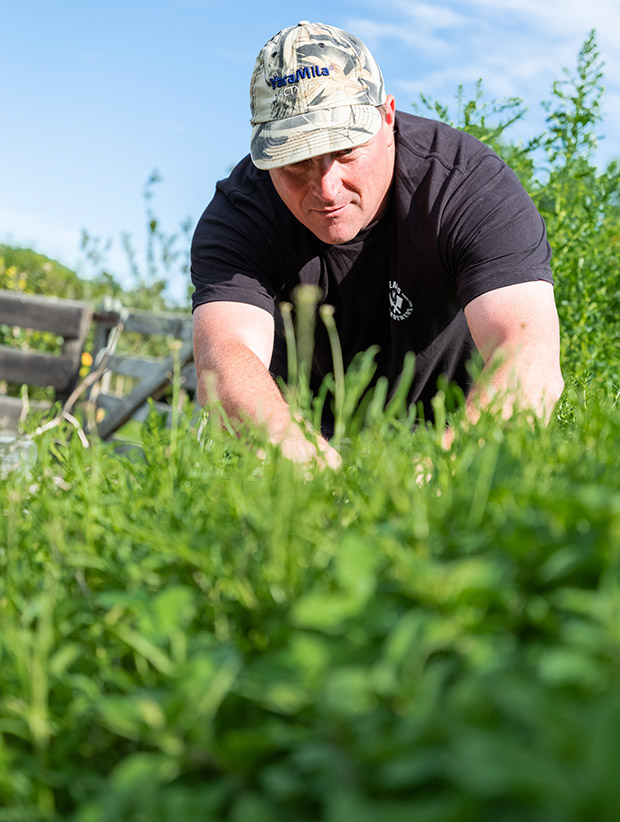 Rob hadn’t originally planned to become a seasoned sausage-maker. His career was pretty much secured in the wine industry, where he had been working as a viticulturist since leaving high school at 15. But when his sister took her own life in 2011, everything changed. That year he quit his job, requested a mortgage holiday, bought a shipping container, and converted it into a small, niche butchery called Wild Game Salamis — right outside his door.

Pivoting from grapes to small goods wasn’t completely out of character for Rob. For years, the keen outdoorsman had been processing his own venison and even dabbled in making salami and sausages. Wild Game Salamis was essentially an amped-up version of his hobby, with Rob handcrafting a rangemof wild-game meat salamis, blood puddings and sausages from his windowless container-cum-butchery. “I just thought I could make a better product. I suppose it’s like anything — if something can be done better, you want to do it better,” says Rob.

But there was a problem. Without any employees, the venture required Rob and his wife Lara to work seven days a week to make ends meet, juggling their time between processing home kill, running a market stall on Saturdays and Sundays and raising three young boys.

“My chest was sore when my wife Googled symptoms of a heart attack. I’m like, ‘Nah, it can’t be that — I must have lifted something wrong.’ When I went to the hospital the next morning, the doctor told me that I was lucky to be alive,” he says. 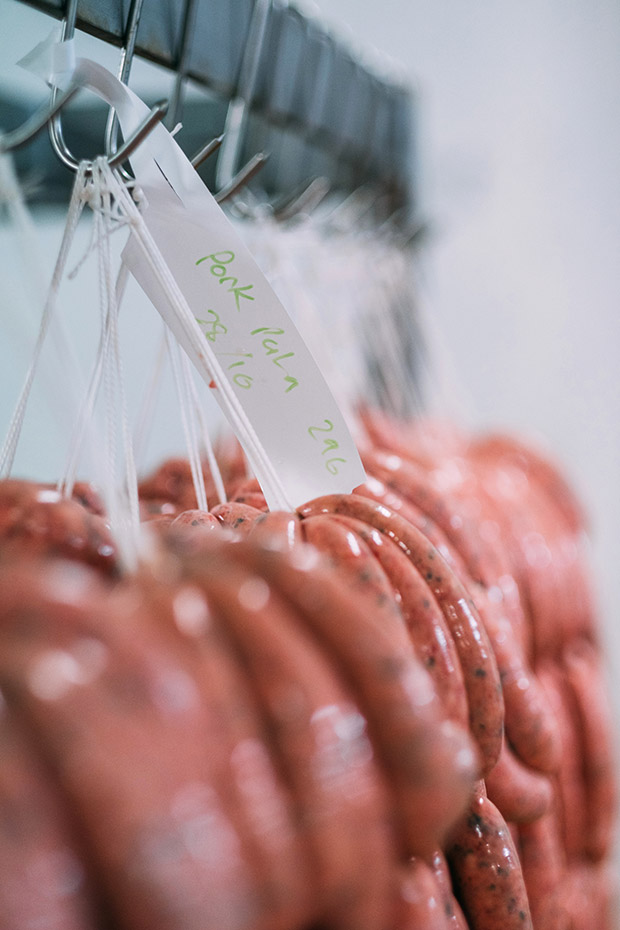 The doctors believed his heart attack was caused by stress; in other words, something had to give. Rob knew he needed a smarter business model. Perhaps less niche, he mused from his hospital bed, and one that could tickle taste buds beyond Hawke’s Bay. Beard Brothers, a spin-off solely focused on bangers and burgers, was launched in 2016.

“I’ll be honest,” says Rob. “It was never meant to go like this.” By “this”, he means going from a backyard butchery to having the Beard Brothers range stocked in more than 170 retailers throughout New Zealand, including the majority of New World, Pak’nSave and Four Square supermarkets.

What was the secret? Flavour, Rob reckons. Within a year of launching, the sausage industry was left scratching its head when a curious brand called Beard Brothers (named after his and Lara’s three sons) tied for gold at the 2017 New Zealand Sausage Competition. Suffice to say, the gold-winning Beard Brothers Old School Saveloy had judges fired up.

“They were like, ‘Who the hell is this guy? He’s not even a trained butcher,’” says Rob. Beard Brothers, now based in a purpose-built 320-square-metre factory in Hastings, produces several grillable goodies made from New Zealand beef, pork, goat and (sometimes wild) venison. The venture may be more mainstream than Wild Game Salamis (now run by a full-time manager), but the brand remains loyal to Rob’s hunting and foraging roots.

Venison is sourced from the wild wherever possible, and sausage casings are made, well, the traditional way. “Natural casings [made with animal intestines] may sound gross, but that’s what casings should be made from. My philosophy is if you’re going to kill something, you need to use everything,” says Rob.

Most of the flavours in the Beard Brothers 15-product range are kept minimal, except for a few tried-and-true flavour combinations, such as Beef & Spice Sausages and Pork & Cress Sausages. The latter suggested by Rob and Lara’s middle son Ned (13) on a hunting trip. “We were cooking up a deer with watercress, which Ned loves. He was like, ‘Dad, you need to do this with a sausage.’ The very next week, we started mucking around with it.” 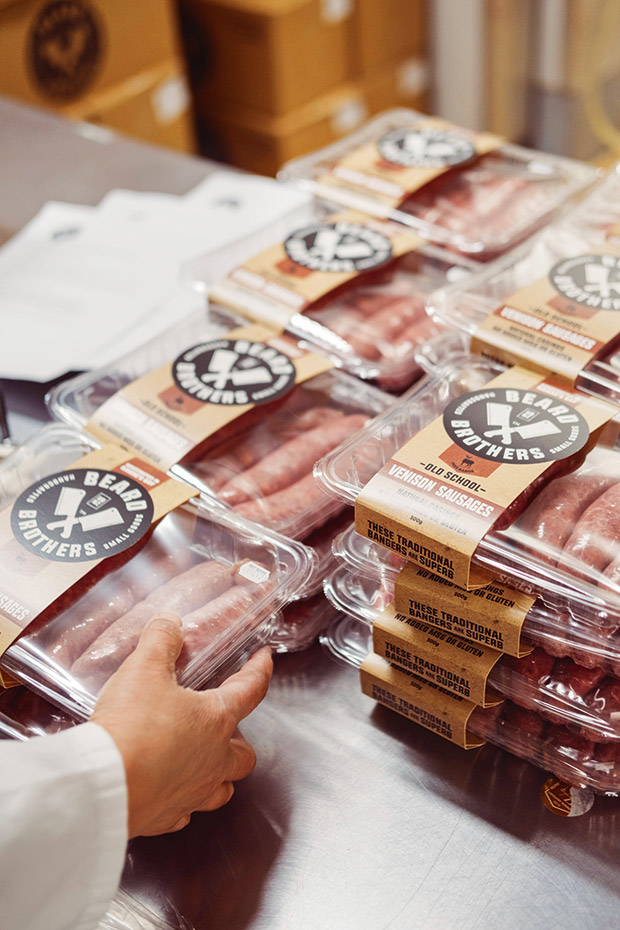 But finding a commercial watercress grower was easier said than done. After searching high and low, he chanced upon a young family growing hydroponic watercress just down the road from the sausage factory.

Rob, now armed with a staff of 20, says the sourcing of farms that adhere to sustainable farming practices is one of the most significant parts of his job. As Beard Brothers has scaled up, there have even been times when suppliers haven’t been able to keep up with demand.

“That can hurt a little bit, but it’s about sticking to what Beard Brothers was founded on. We are about trying to keep it as local as we can. If I used imported pork, we could add more gross profit to our business. But that’s not what we are about — never has been.”

Becoming profitable has been a long slog that once took a toll on Rob’s wellbeing. Last year, it took a mate checking up on him for Rob to recognize he was on the verge of burning out. “Looking back, the signs were so clear: sleep deprivation, financial pressure and trying to juggle everything. And that staunch Kiwi male attitude of, ‘Oh, I’ll be right. I’ll get it done myself,’” he says. 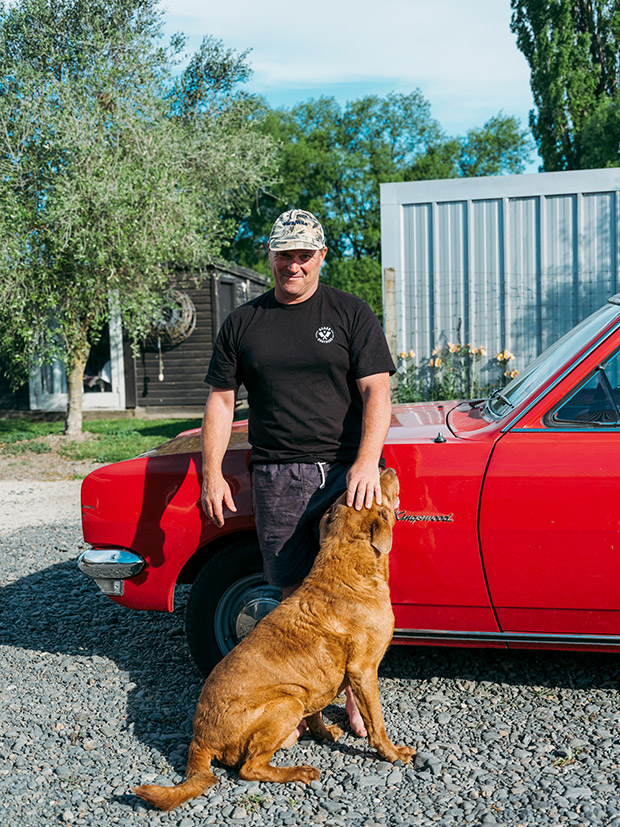 After seeking professional help and taking time off, Rob is eager to use the business as a vehicle to help others. Beard Brothers has partnered with several charities over the years but, these days, supporting mental health services — such as Gumboot Friday and Lifeline Aotearoa — is particularly meaningful for the Beard family.

In true form, Rob is still up to his ears with ideas and shows no signs of slowing down. The sausage man has his sights set high for the future of Beard Brothers. “We want to be the Whittaker’s of the sausage world.” beardbrothers.co.nz 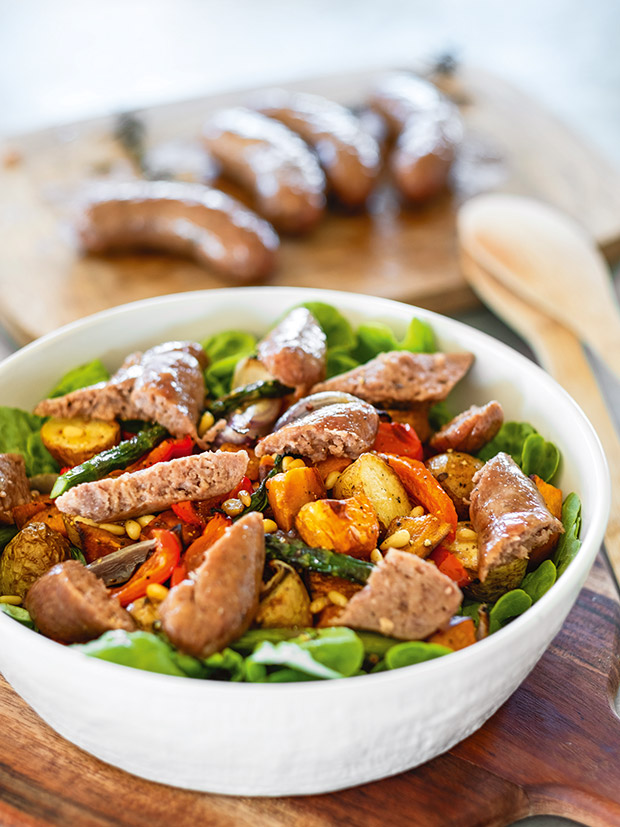 Preheat oven to 220°C. Place potatoes, kūmara, garlic and olive oil into a bowl. Toss well to combine. Spread mixture in a single layer onto a large oven tray. Season generously with salt and pepper. Roast for 20 minutes.

Flip potatoes and kūmara. Add capsicum, onions and asparagus to the tray (give these a drizzle of olive oil before placing in the oven). Roast for another 15 minutes. Add pinenuts and roast for a further 5 minutes or until vegetables are browned and tender. Set aside for 10 minutes to cool slightly.

Cut cooked sausages at an angle into bite-sized pieces. To serve, place lettuce into each bowl and then a generous serving of the roasted vegetable mixture on top. Add sliced sausage, crumbled feta and dressing of your choice. To add extra flavour to the sausages, use a fresh sprig of rosemary or bundle of thyme to brush the uncooked sausages with olive oil. Toss the rosemary or thyme into the oven or on the barbecue to cook with the sausages.